Hi all, just joined & though I would throw my first thread up on a mod I did not long ago.

I was gifted an awning tent a while ago & all I had to buy was an awning which I was going to get anyway.

After using the tent the first time I realised how restrictive it was if you wanted to use the vehicle which you quite often want to do after you set up a camp.
So I set about designing something that would suit what I wanted to do, as usual I over thought this until someone gave me a simple idea.

Anyway I had some alloy tube sitting around which became the new mount attached to the awning & just used some D shackles as the fasteners. 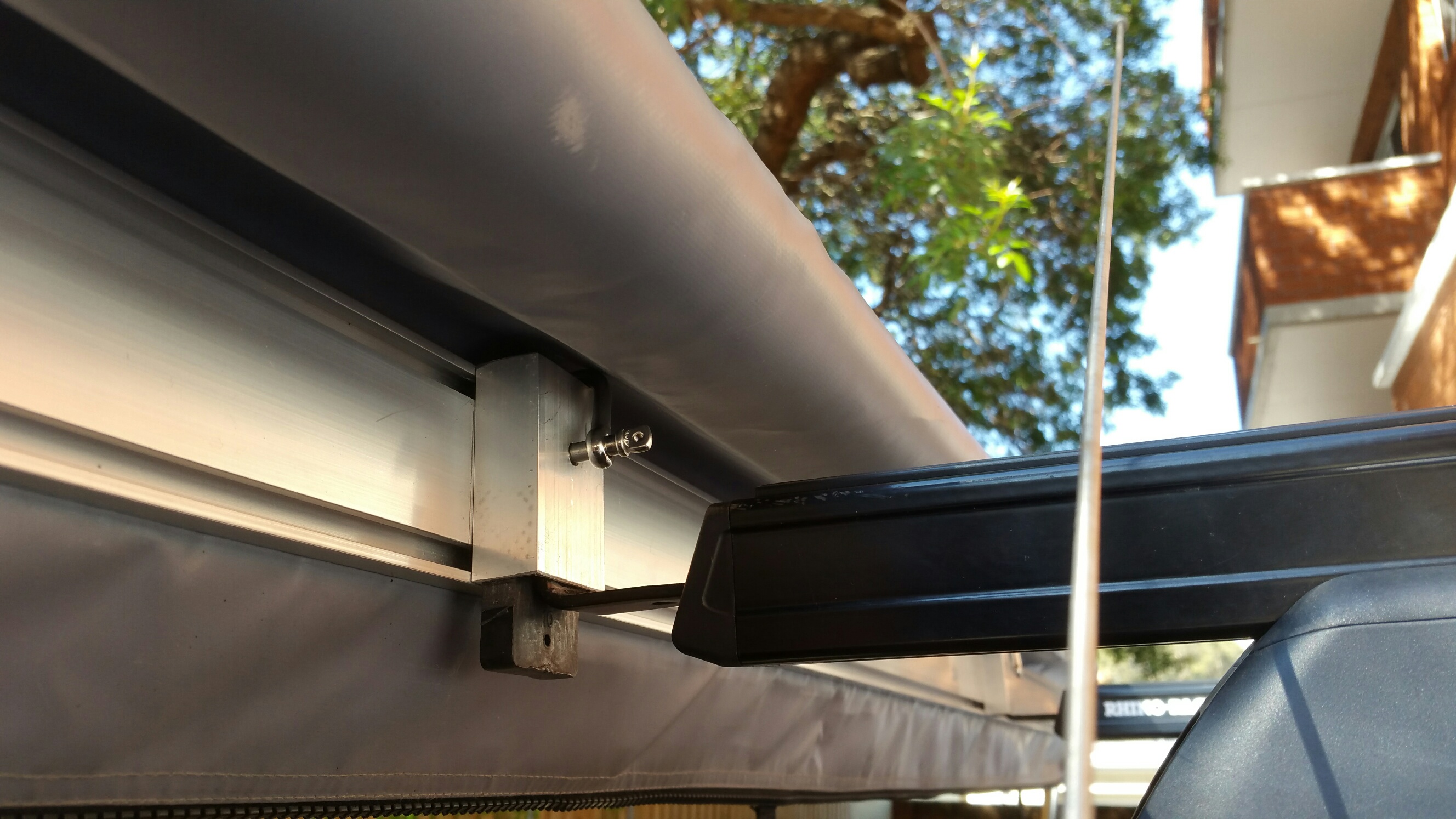 I bought a couple of new poles & guy ropes & had to drill some holes in the awning frame for the poles. 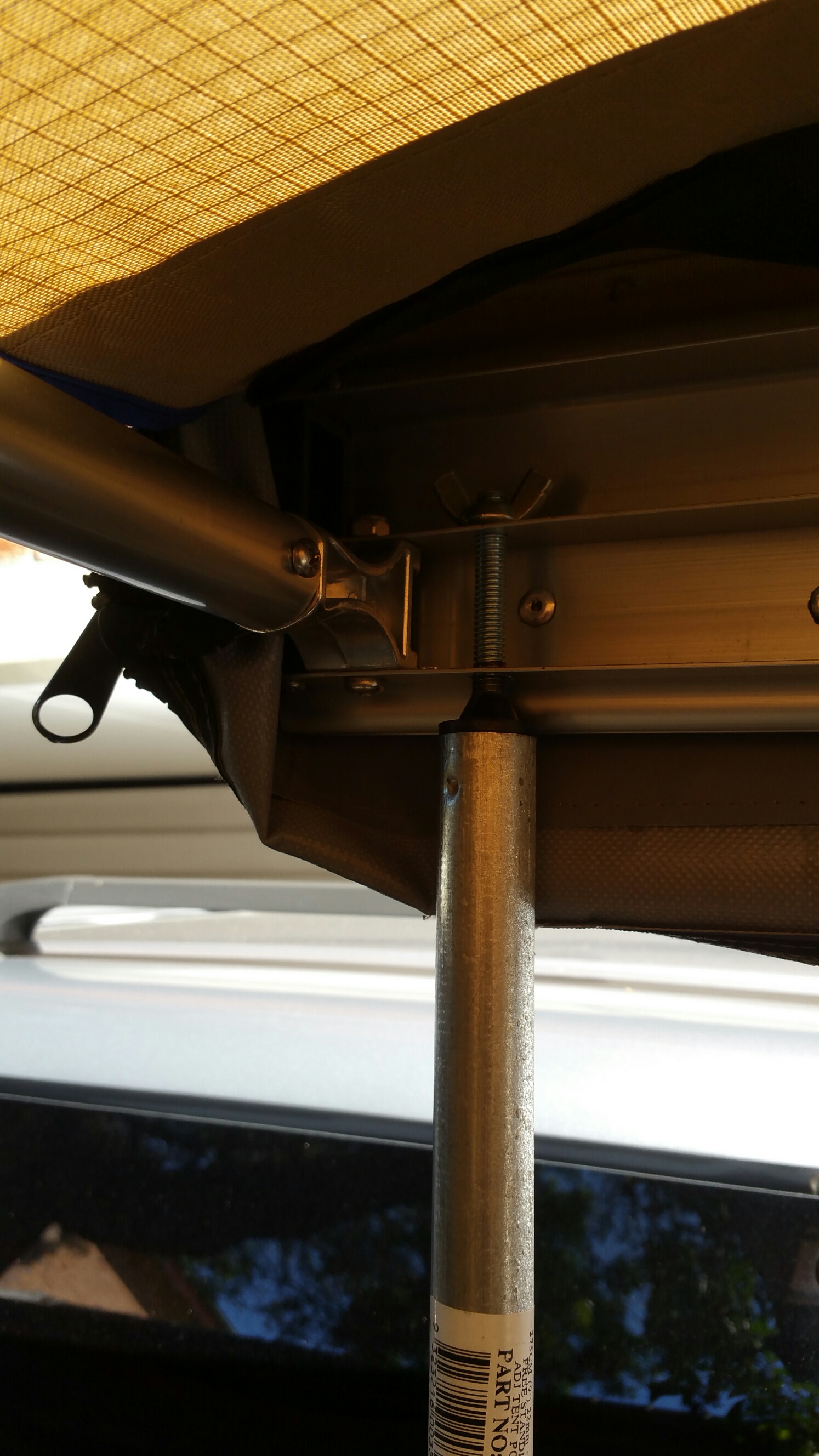 There is a process in fitting it to the racks & to the car but then it detaches & re attached in seconds. 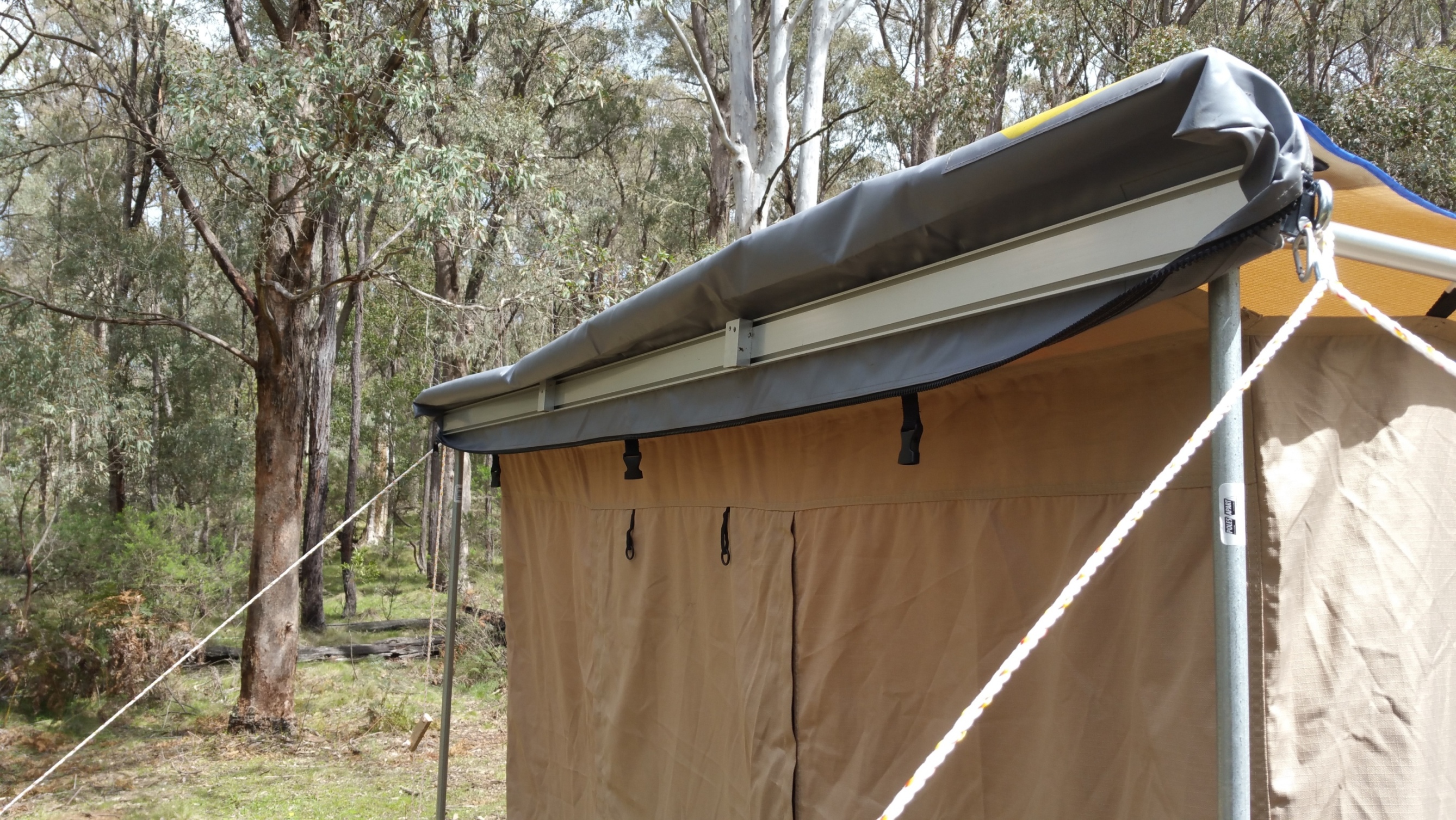 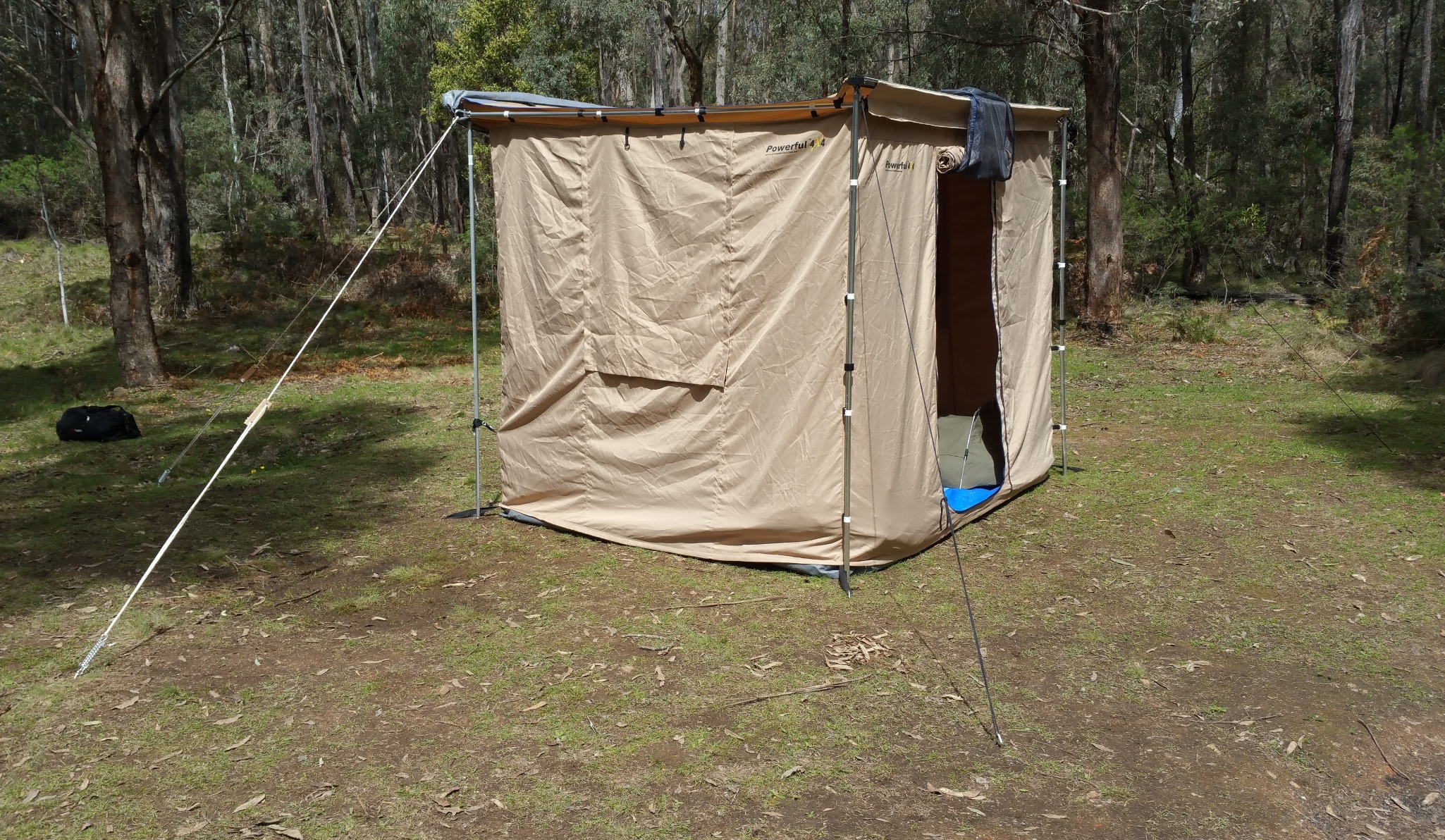 I have other tents but this is now an ideal set up for me for just short trips & now I can still use the car for whatever I need!

Great Idea but put some thought into rain as you need slope on awnings or they collapse.
We often just drop one corner.
A

Great idea! I'd be a little wary using those shackles to retain the awning to the l-brackets, though. At least run some wire through the shackle pins, to stop them rattling/rotating lose. Or for rattle free, you could use a couple of bolts (with flat washers) screwed through the aluminium rhs and l-brackets, into some threaded packing plate?

Hi
Yes we were talking about this in a previous thread, but just the awning, great job..

Yeh I could have been in that conversation swaggie, I joined under another name & re-opened an thread then I think my subscription got pulled or something as I couldn't log in & the content was gone?
Not sure?

Anyway this is part of the advise anyway.

ABW, I know anything is possible but I do the bolt up with pliers & the shackles are under a bit of weight so it all seems ok.
I went on a 1200km road & bush trip in the trip in the pictures with no issues.

But yes I am looking at doing something about the flat top, it does collect water & on the previous trip about 4 inches of snow!
I could just lower the front at night I guess but maybe I will look at getting an extendable pole & prop up the middle like a big top??

I am going to do a refit over summer at this was a quick solution for this trip, but it worked
Last edited: Oct 26, 2016

Awesome idea! I just mounted 2 awnings on my cage trailer....... unhook the trailer and put the locks on it and away we go!

Great idea, it looks really good. I must agree about rain though. It's a bit hard to tell from the pictures but is there any slope on the roof? If not a shower or storm could end up sharing your sleeping bag. Full marks on the idea though. Cheers!

Hey guys, my thread lives on so that's cool much appreciated

Yeh there are now commercial brackets available that I have seen(cant remember brands) & dont think they were around when I did this?

While these new mounts are not expensive in modern terms I guess for me at the time it was about DIY.

Yes your totally correct @Rusty Panels this is an inherent problem for an awning tent.

You either need to lower the front poles or one corner for run off but it still pools on the awning somewhere.

I will admit this is not a great set up but it saved myself & my mate from a couple of major snow storms in the NSW highlands, one pictured in my avatar.
It survived 100kph wind gusts(glad it was attached to the triton on that one!) , 4 inches of snow on top of it & numerous major drenching's. 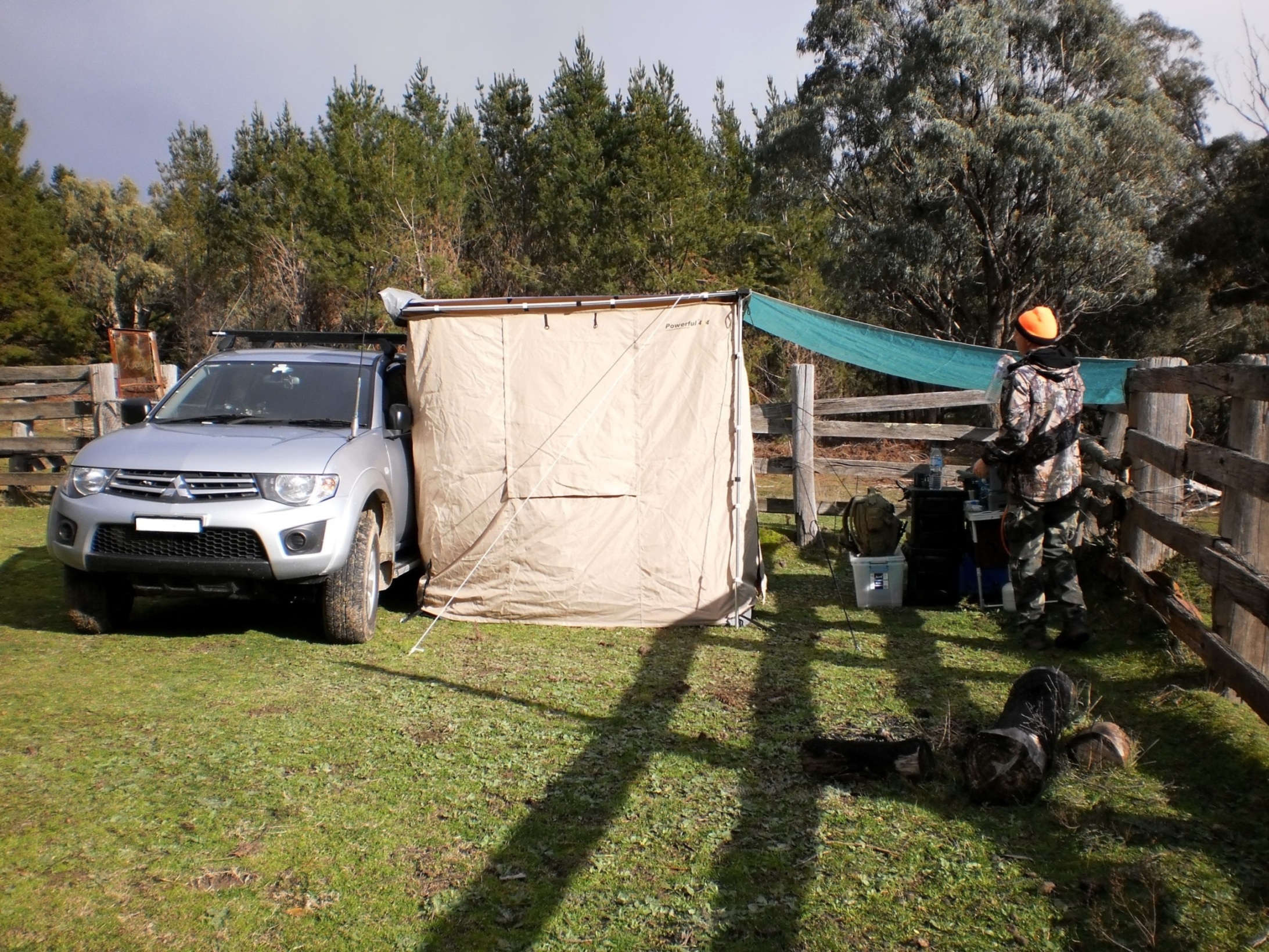 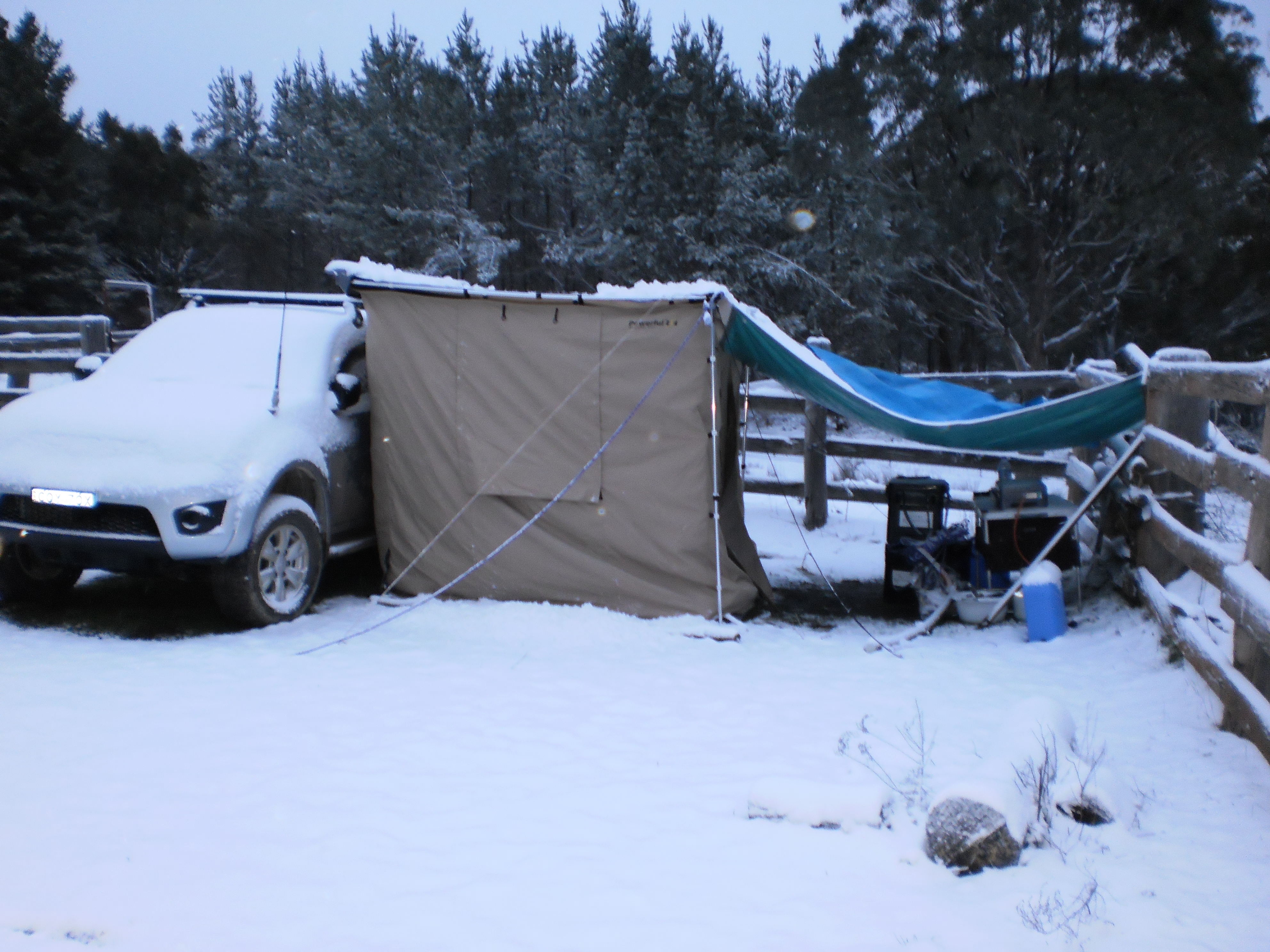 Just see this
Your setup semilar with me. For overnight stay it way much easier to use awning tent.
With easy of/on awning clamp from yakima
My awning became a tent wich can stand alone and can use the car too.

Komang said:
Just see this
Your setup semilar with me. For overnight stay it way much easier to use awning tent.
With easy of/on awning clamp from yakima
My awning became a tent wich can stand alone and can use the car too.
Click to expand...

Back when I did this I could not find anything that was pre fabricated but now there are quite a few brackets on the market.

At the time the awning tent & the DIY bracket did its job but I am moving away from an awning tent as it has to many problems with its design like the straight horizontal roof.

Yes it has straight design but we can put down the legs so it on the angle abit. We only use it for quick or overnight stay.

Komang said:
Yes it has straight design but we can put down the legs so it on the angle abit. We only use it for quick or overnight stay.
Click to expand...

Yes I do that as well now but the water pools up even when you angle one corner down.

An extendable centre pole could work inside the tent but it would have to also push up the awning to.

Anyway it is what it is.

I want to get a camper trailer next, more room, more comfort & a much better set up but a lot more $$