Ok so today was the day!
Started at about 11am and finished about 4pm.
We took our time to make sure it all went smooth, so we thought.
Started by sticking the template to the guard to check against the snorkel to make sure the hole was going to be in the correct position. (the template was pretty much useless after this) 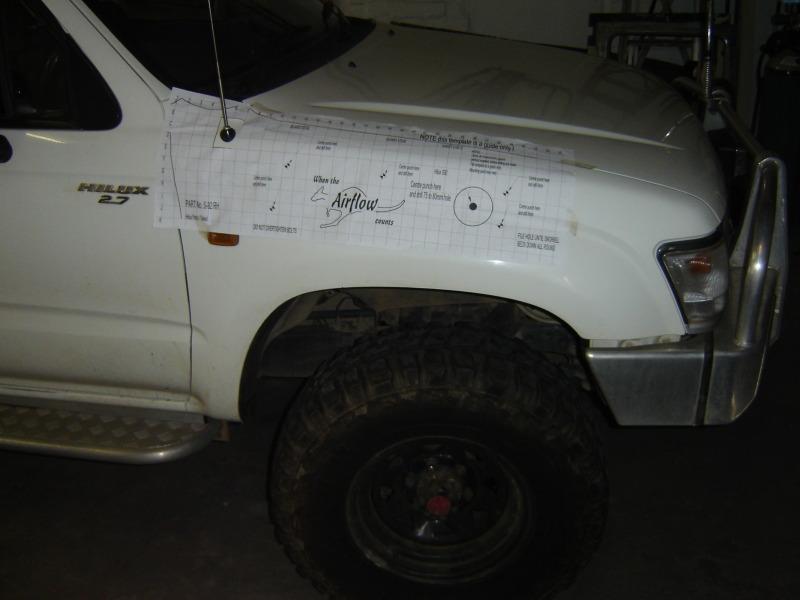 Once we had the snorkel, aerial and body lines of the hilux all matched up we drilled the main hole. 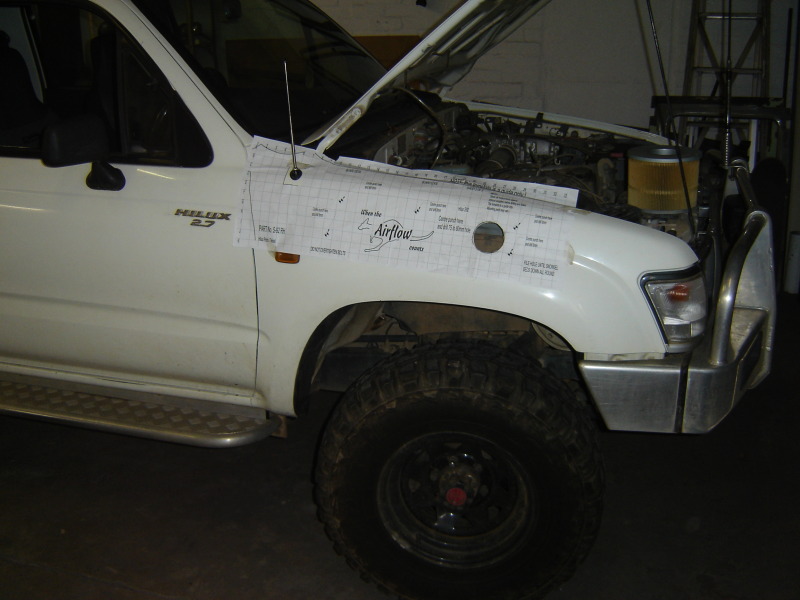 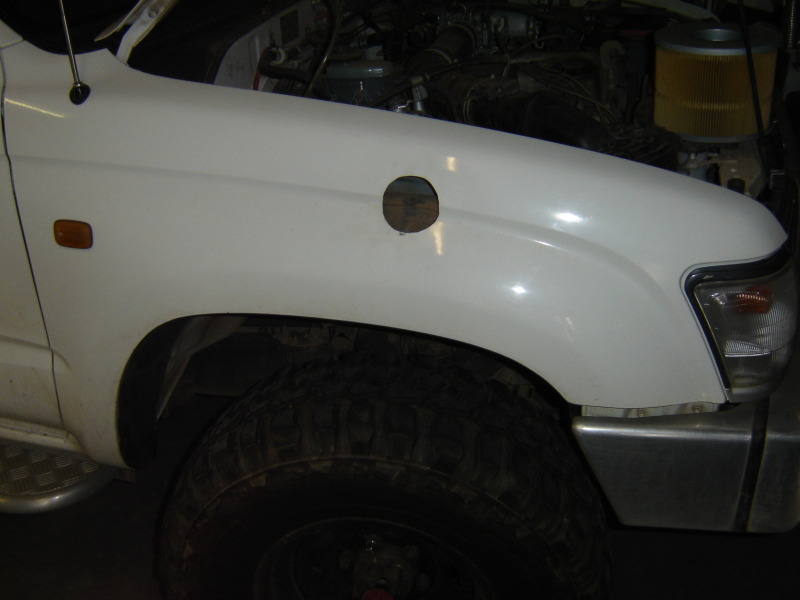 Next we had to remove the guard to get better access to the intake system. Before we removed the guard we used some masking tape and a marker to put some lines around the edge of the panel so we could match the position when reattaching the guard.

Once the guard was off we could remove the existing air intake tube and get started on the remaining holes needed for attaching the snorkel.

Rather than trust the template we used blue tack in on all the screw holes on the back of the snorkel and coloured the blue tack with a marker then lined up the main hole and slid the snorkel into place. once we removed the snorkel again we had our 5 holes marked exactly on the guard. A few drill holes in the guard and the scary part was over. 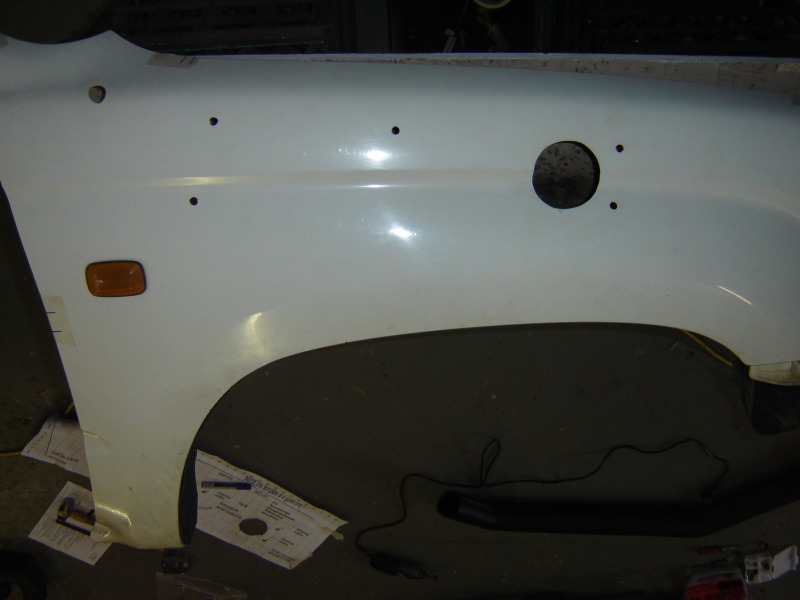 Next up was bolting snorkel to the guard, all the bolts supplied fit perfect so no issues there.

Then we attached the hose to the two L shaped connections supplied with the kit. This was the issue we had. the length of the L shaped pieces was great going into the hose but the air box end and the snorkel end were a bit short so it made it tricky to get this piece to stay in place even after tightening the hose clamps. we ended up pop riveting the snorkel end and then tightening the hose clamp over the top of the rivet as it would be hard to get to this join once the guard was re attached. 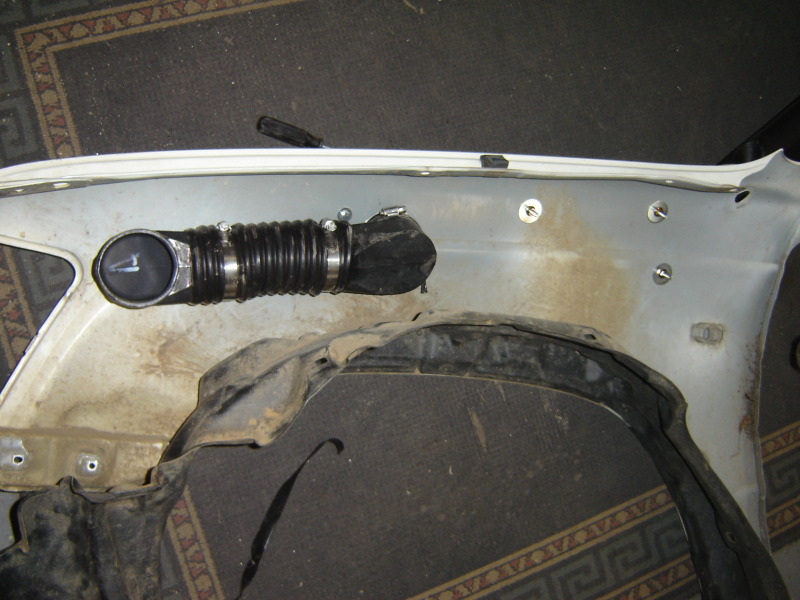 Almost done now... we then attached the guard and fixed the snorkel hose to the airbox from the hole in the inner guard, then bolted the upper section to the bracket and put all the bolts back in that we had removed to get the job done, including lossening the bullbar bolts to get to some of the Guard mounts. 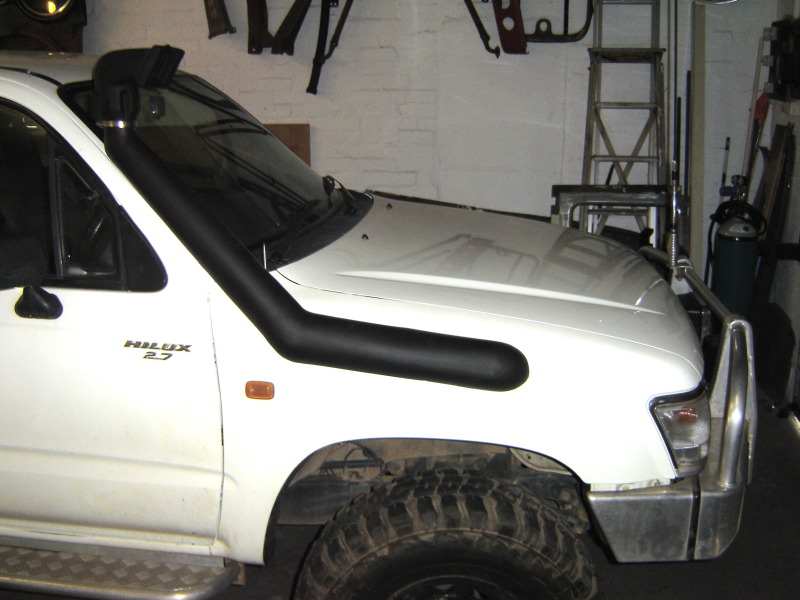 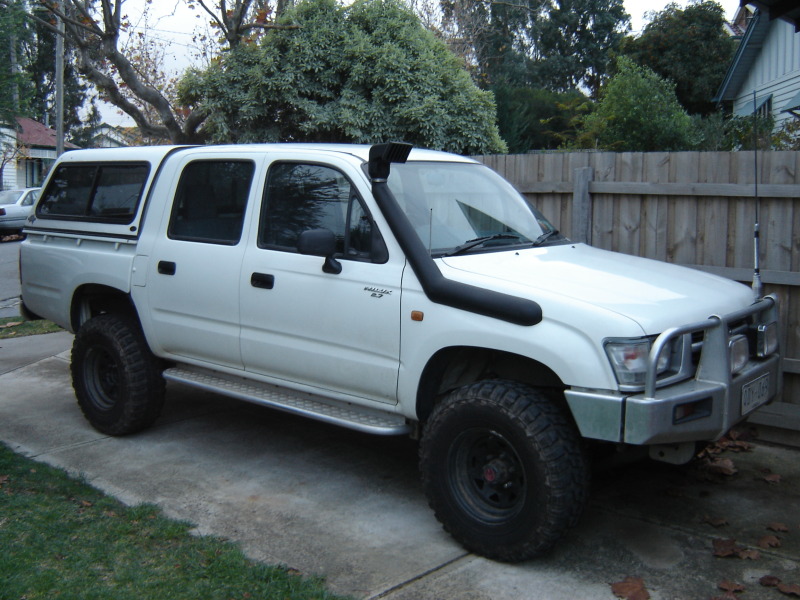 Total cost was $358 including delivery to my door by Toll.
Not sure if it is completely water tight yet but we used a bit of black silicon around the inside of each join so once that has time to set I will try the bag over the top to see if the car stalls. Hopefully this helps anyone else with plans to add a snorkel in the future.
Not real hard but patience and being sure about your measurements is the key. if we had trusted the template I would have twice as many holes in the guard behind the snorkel....
Fun day.

Good run down on the DIY.

Im looking to put a snorkel on my navara and was thinking of doing it my self as i feel capable but i dont think i can drill such a big hole in it.

Well done great job with good details seems it was a lot harder than when i did my 80, but as you mentioned very scary drilling holes in guard but what relief when everything lines up, i wasn't sure about the template either but turns out it was spot on. Just one thing did you paint the bare edges to stop the rust. Well Done again

yep, gave the edges a quick touch up with the hilux white paint. was a rough job but should do the trick.

You are right about the templates mate. It's a case of measure 3 times cut once. And if it doesn't look right, it probably isn't...I had to do a petrol GU and a 3.0L diesel Hilux in a Day,just a few weeks ago and templates are vague at best. I must say that the Safari templates are miles better than any others.
P.S. the GU petrol was a bloody night mare, had to pull half the truck apart to do a simple snorkel.
You did a ripping good job on your install mate, well done.
Cheers Andy

Cheers guys, i checked if it was airtight tonight and it is so im happy its all done and works properly.

that was a good job from start to finish , great photo sequence even included the flanno shirt

Well done Hayden, Patients is the key.! the truck is looking the part now!!.be good to catch up on the weekend.
Cheers mark

may i add after you cut the holes you paint the exposed metal as it will rust. and on the pillar bracket silicon the holes befor tightening screws as touching metals that are not sealed will actually suck water into the joint (cappiliary attraction), id be inclinened to use rubber for all the joints. i just depends how deep you intent to go, and for how long.

my snorkel kit (safari BJ70) water seal wise only required to cut a rectangle hole into the air box and add a cast housing, the metal to metal joint was polyurathaned seal inbetween the 2 metal surfaces and riveted on, the next and last joint is the housing to the sorkel which is a internal rubber o ring, it was tight added a bit of lube and it slid on nicely.

Thanks PHS, yeah i did paint in and around the new holes in the panel (you can see in the 7th picture from inside of the guard the paint showing on the snorkel hole)
I was unaware of the bracket issue you mentioned... "capillary attraction" does this only apply when submerged..? because I will never take it that deep.. the bracket is at head height.

sorry about the paint thing iv used my download cap so not all the photos loaded.

as for capilliary attraction, in theory it would suck water when it rains and water sits on the braket id think on a snokel it would be a long term problem, dunno even if would be enought water to even worrie about, but i just put some silicon under the screws just to be safe.

I'm also a fan of Penetrol. I dont use silicone on anything though. I'd rather use a polyurethane like Sikaflex.

yes polyurathane is great but you need to make sure you get the right one for the right application and the clean up is much worse than silicon. for 2 screws placing silicon in between the joint is fine, i used polyurathane for the air box snorkel houseing cut in thow as it will see greater temp changes and more movment. you can go to the sikaflex website and read what polyurathane will suit your application best

I'll have a closer look next weekend if I get the chance.

Bloody good job Hayden!! Great photos and run through of the whole process. I'm still not going to do it to the Prado though....

Thanks Gilly, im bloody happy with how it came out.
hopefully we can do some deepish crossings on this trip and i can get a photo to show Jen why we needed a snorkel...

Good job dude,Dont forget to pull the rubber grommet from inside your air filter and silicone the (hole) bugger up....

Then maybe some diff breathers...The caps on these Toyotas are Craaaaap and dont forget de transfer case..