Deep Creek camping ground is at the very end of North Ansons Rd. Eddystone Point. It's about 45mins North of St. Helens in the Bay of Fires area on the East Coast of Tasmania. You'll need to bring your own water and fire wood, there are drop toilets, but no showers. There are some private shacks near by with tanks, but they are private and not for general use. It's a great place for kids with plenty of places to explore or simply stroll the many kilometeres of beach. You'll need a Tassie Parks Pass and it's $8/night for 2 people. http://www.parks.tas.gov.au/index.aspx?base=914 has the different prices depending on where you're going while in Tassie. We camped for four nights with Two adults &amp; four kids showering most nights. A beatiful spot off the general tourist rout, with plenty of places to visit nearby and some 4wd track for those who are keen. 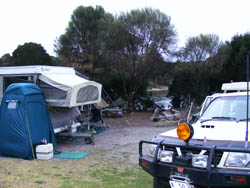