That looks mad. Love it.

You've put a lot of effort into that and it has definitely paid off.

Sent from my C6603 using Tapatalk

Does look good mate. Something about it with those wheels really makes the trailer follow the body lines of the Dmax, sorta like it was "meant to be there". Doesn't look outta place at all.

Awsome trailer mate. Better than a bought one. Looks like alot of work went into it, done well.
W

That is a damn nice ute

This is my attempt so far. Have'nt seen this thread and my chassis is looking pretty much the same as yours. We'll be using a current D-Max tub and a steel ute box on the front.

And this is the 60+Litre water tank that will sit between the tub and the utebox.

yobboford: A few questions. What length axle did you use and what was the reason you went over the springs with the axle?

IvanTheTerrible said:
yobboford: A few questions. What length axle did you use and what was the reason you went over the springs with the axle?

Just so your aware champ yobbo and his family a doing the big lap around the country at the moment not due back till early next year . With not much service it might take him a while to answer your questions. However his trailer is at my property so will take some measurements for you and help where possible till he replys cheers kris

Hi mate, as Bugsy explained I'm in outback WA at the moment so I only just saw this. The axle is 1640mm face to face on the hubs and that will be the same as a current model dmax.

Your chassis looks good and very similar, good luck with it and any other questions just shoot away.

This thing looks mint mate! How is it going for you?

@yobboford if you dont mine me asking, what length is your draw bar on that trailer? probably an estimate from the front of the tub to the hitch would be good. looking at building something similar to tow behind my prado, but having the read swinging door, i need the draw bar excesivly long to allow it to open without hitting stuff. cheers.

mangoat said:
@yobboford if you dont mine me asking, what length is your draw bar on that trailer? probably an estimate from the front of the tub to the hitch would be good. looking at building something similar to tow behind my prado, but having the read swinging door, i need the draw bar excesivly long to allow it to open without hitting stuff. cheers.
Click to expand...

Sorry for the late reply, I don't get on here as much as I should nowadays. My drawbar in hindsight is too short, if I was doing it again I would have put an extra metre in it at least. It is 1400mm from the front of the toolbox to the hitch point. It does make for a good ramp over and rarely gets caught up on anything but I would sacrifice that for the extra room to mount stuff on there instead.
Cheers, Rob.
D

Thanks for the help , and your idea @yobboford

yobboford said:
Howdy guys and girls, over the last few months I have been tinkering away in my spare time building a trailer from the tub that came off my D-max so I thought now that it's registered I would throw together a bit of a thread about the build.

It all began when I decided to replace the tub with an alloy tray on the ute and the tub was left gathering dust and in the way out the back. I always had in my mind that I would like to turn it into a trailer but after going to the Vic high country trip with the other NSW boys I really liked the idea of setting up each night in a different spot. having a soft floor camper trailer was good but the set up time and effort wasn't great for those one night stays so I sold the camper and got myself a Turbo tent for the family and started planning a trailer I could tow anywhere to use as a "homebase" when camping complete with kitchen, water tank etc... .

I grabbed some pallets from work and set the tub upside down on them and began piecing together the frame for it all to sit on. 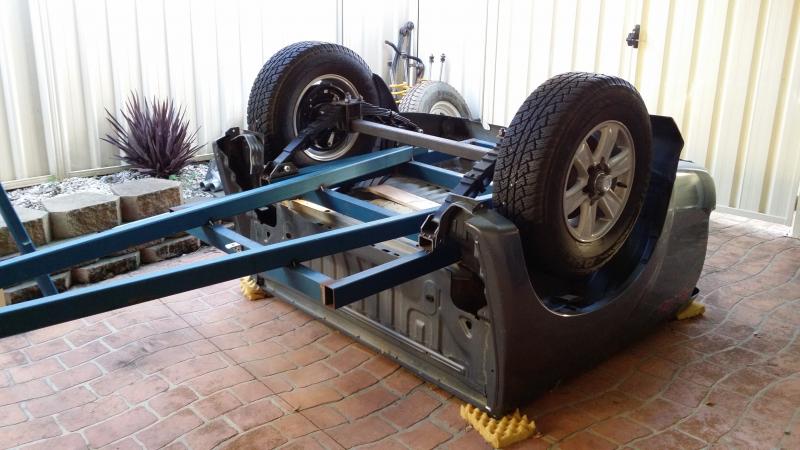 My number one goal with this was to make it "TUFF" so I went overboard with material using 5mm wall for the drawbar and 10mm plate for the hitch mount with 3mm wall for the frame and I ordered a 2000kg package axle/suspension set up including 12" electric brakes and rebound leafsprings. I know independent suspension is the flavour of the day but I love the simplicity and reliability of leaves so I stuck with them.

After nutting out all the dimensions and tacking together the frame and drawbar I took it in to my work where the welders there applied their magic and made it as strong as anything (yes I can weld but not like a professional high pressure ticketed gun, lol).

I then got the frame back and painted it befor starting the assembly.

Next step was to get a few blokes round to lift on the tub then mount the toolbox and begin wiring the whole lot up. 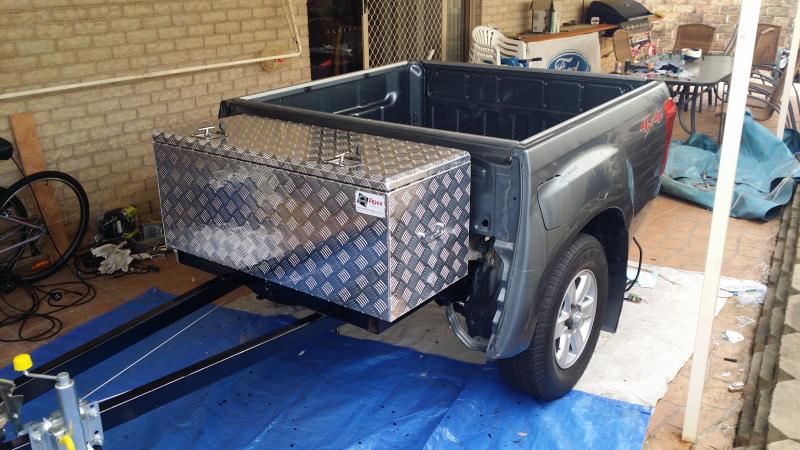 I mounted the 60L water tank under it and sorted out the handbrake and ordered some wheels and tyres for it so that I can swap between car and trailer with the same size and offset. the trailer also has the same track as the ute.

Time for the first test run around the block.

A couple of last minute tweeks and it was off to the weighbridge then blueslip. The weight came in a little more than I was hoping for at 520kg but it passed the blueslip with flying colours and even earned a compliment from the mechanic on the build quality . I got a 2000kg rating giving me a payload of 1480kg, of course I will never have anywhere near that amount in it but it does mean that I will be easily legal with what I plan on putting in it.

I took all my paper work off to the RTA and ten minutes later it was registered and I'm a happy little camper. 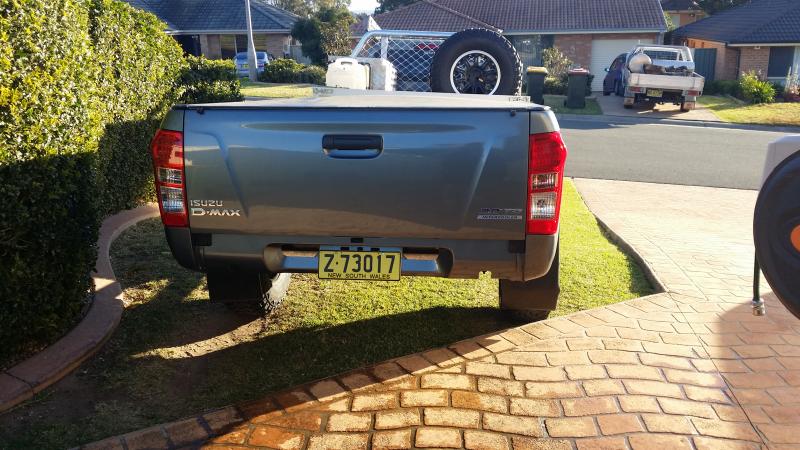 So now its registered I can start setting it up for camping, on the list to do is a jerry can holder either side of the toolbox and a spare mounted on the drawbar, kitchen set up in the back, a frame to mount awnings or tarps off (still thinking of different ideas for that), a stabiliser leg on the back for when camping and a few other ideas I have ticking around.

And the million dollar question - What did it cost me? Too much.... lol

Feel free to give any suggestions.

Hi Mate nice work on the trailer. How’s the balance on it when loaded?

Looks great. Been thinking about doin this myself. But then think if I save a little would I rather a hard floor camper
J

2017 FX4 said:
Looks great. Been thinking about doin this myself. But then think if I save a little would I rather a hard floor camper
Click to expand...