There was some interest in a trip that was done quite awhile ago and someone decided to go and do the trip again just for a look see.

It was mentioned by Richard that he was going to have a drive on the tuesday and go and have a look at Kindee suspension bridge and head up the mountains behind Wauchope, up into Willi Willi national park and out through Bellangry and back down the mountain so i offered to join him for the run. So we met at Timbertown at 9am in the morning all set and ready to go where me met up with Richard and Kaitlyn (hope thats how u spell it) in his prado and me and the better half Belinda in the colarado. First stop was a quick photo at Long Flat hotel ( too bad it wasnt open ) but it was probably abit early anyway. After a quick photo we then decided to head to Kindee suspension bridge.

This is quite an amazing bridge the way it has been built and how it is still standing is a testament to the ole "build it to last" saying. 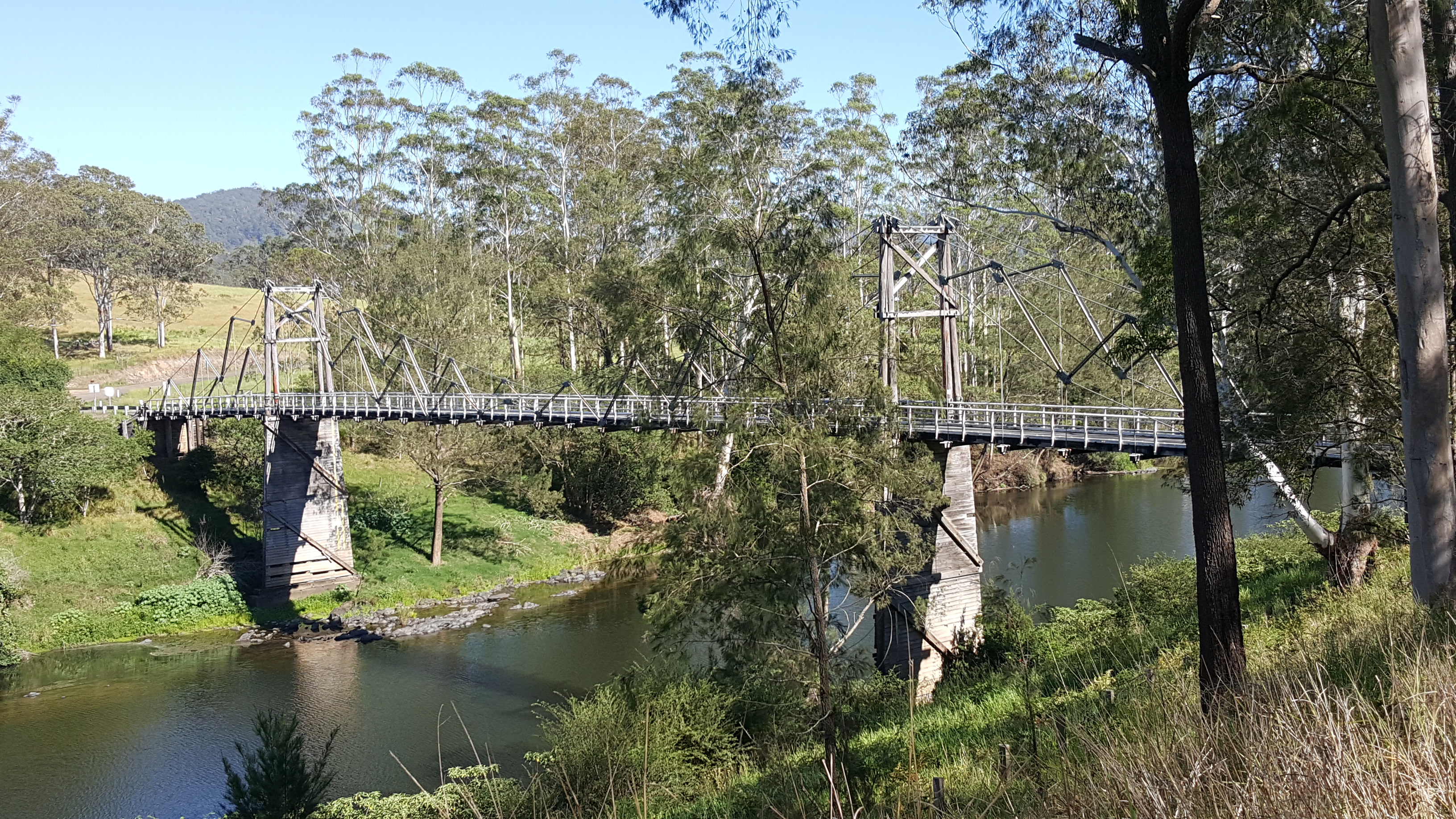 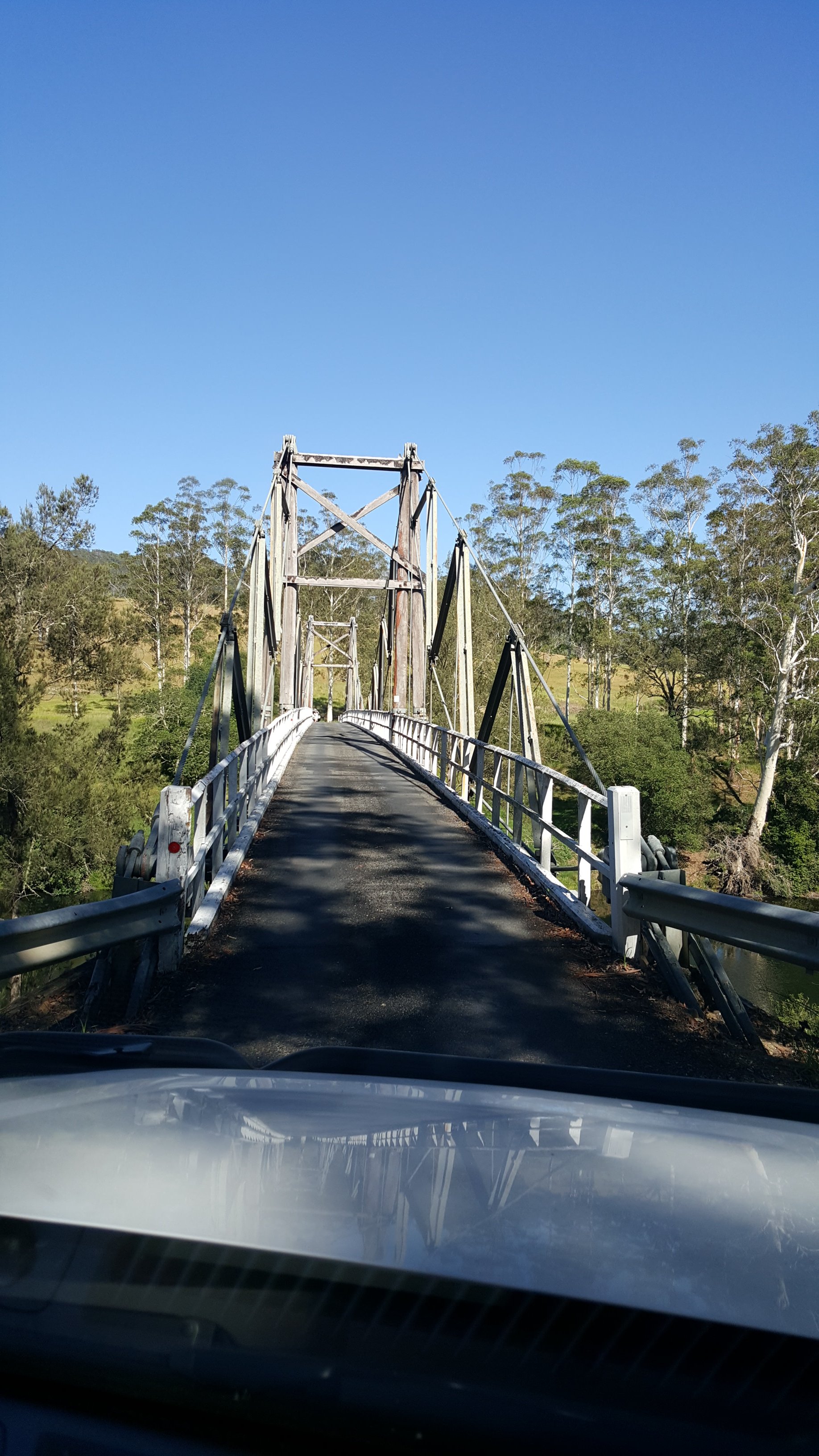 After a walk to the middle for a couple of pics, 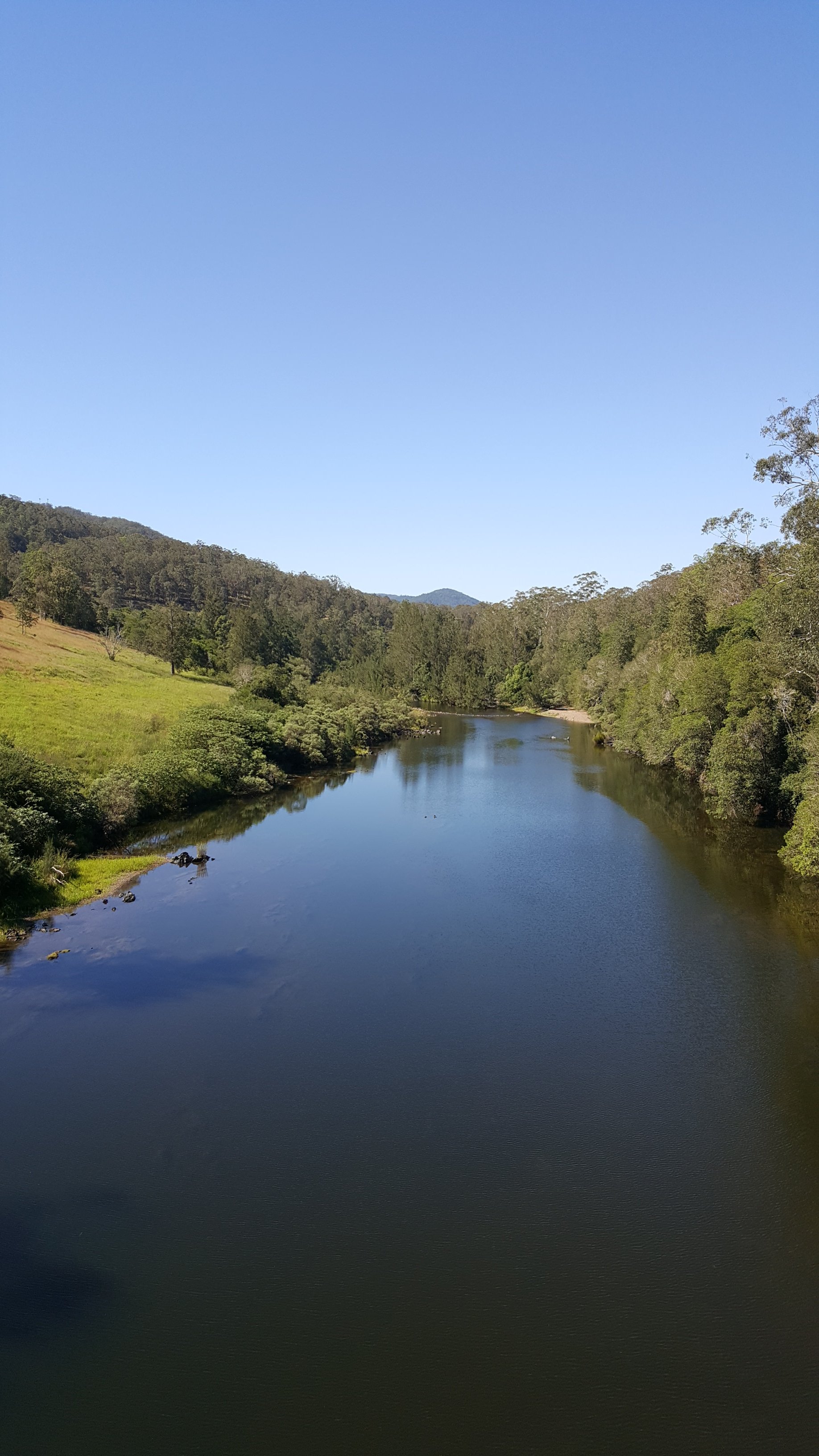 we dicided to move on and head to our next turn off. Richard decided to offer us a quick look at Ellensborough camp area, which we did and it was fairly packed with campers but a short stroll down to the river and we could see why. A fantastic swimming spot was to be found and tge water just perfect. 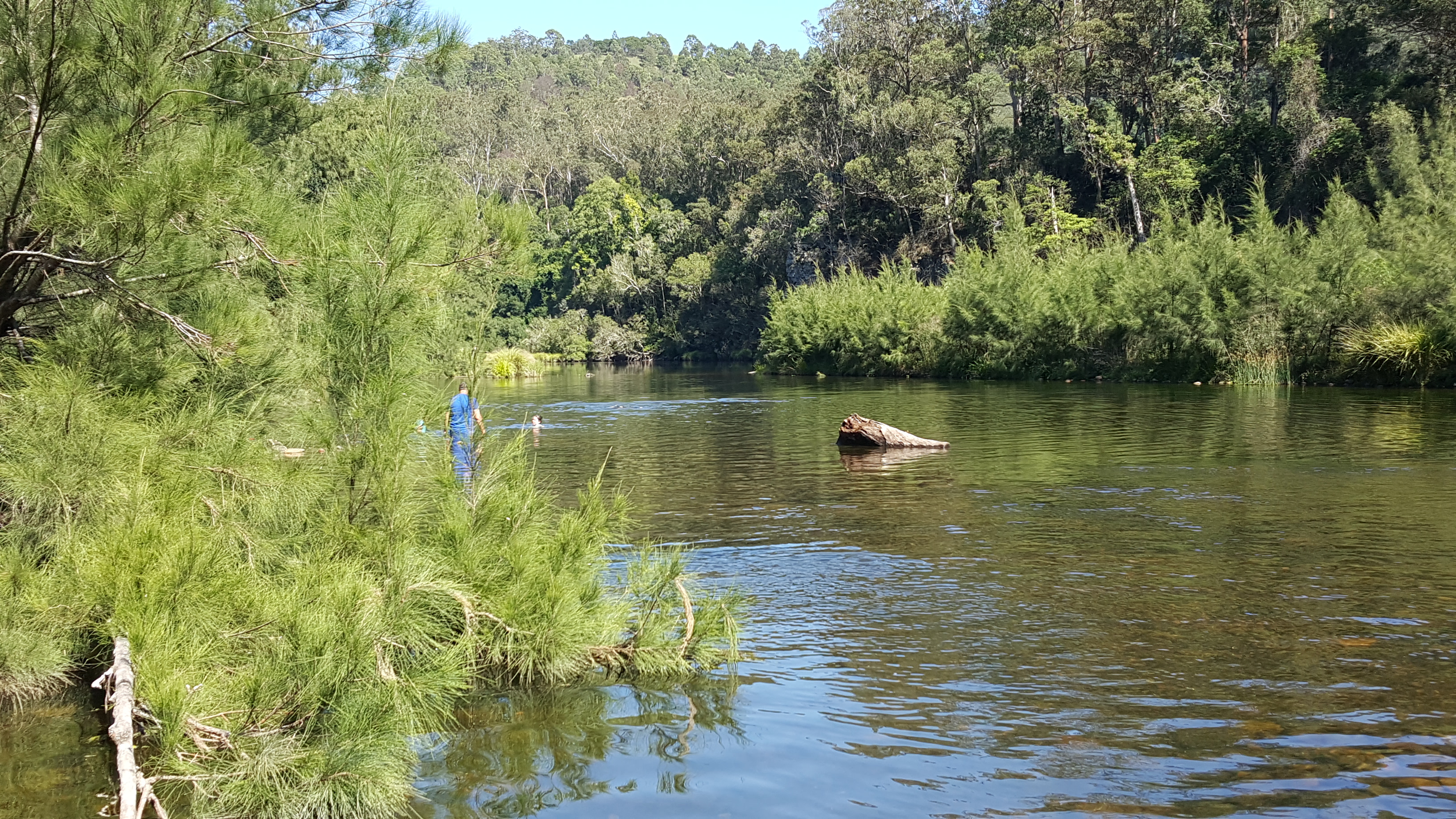 A quick stop here for a look then it was on our way again. We turned off at Forbes River road and it was on the dirt and driving through some farmlands we started to make our way up into the national park.

After a short trip through the farmlands (even an olive grove) we finally got into the actual national park and there we switched our radios over to ch24 as we had passed a logging truck on the way along and thought it was best to keep up if there was a large truck coming our way. We turned off shortley after and went off on another offshoot road that wound its way up the side of the hills. This was a fairly good trail at the start but as we got higher it started to get a bit rougher, nothing major tho.

We travelled for awhile up into the mountains till we got to a track that lead of to the left, to a camp area called Plateua Beech campground which we decided to have a look at but shortly after taking the track there was a tree across it which we decided would take us too long to clear so we left it for national parks and turned around. We got back out on the main track and continued up to a place Richard knew called Brushy Mountain campground which i think he mentioned is at around 1100m in altitude and open all year round. Sounds like a great spot for a camp in the middle of winter to me actually, hopefully camp in the snow. 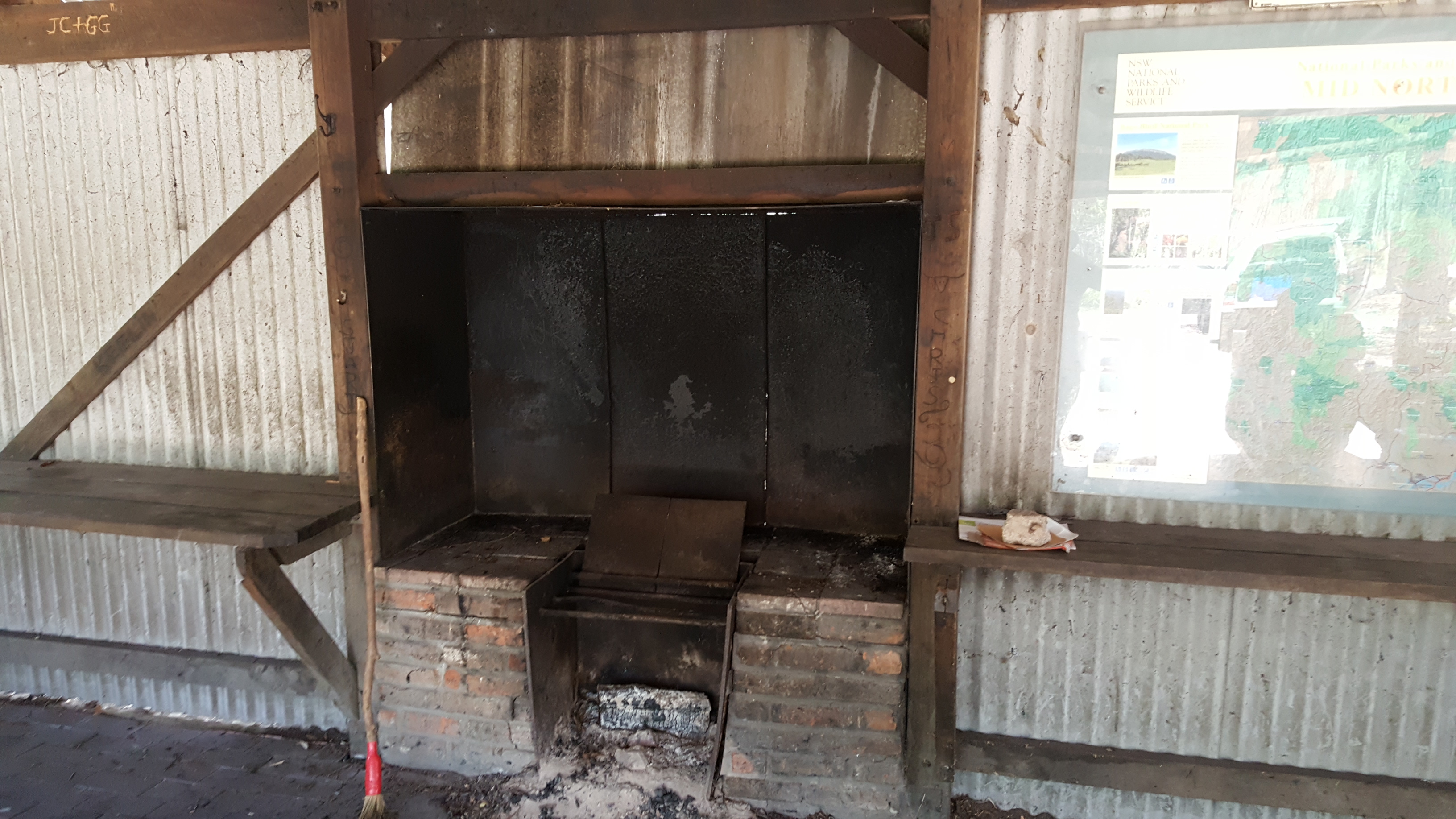 After a quick stop here we decided to head on down to a spot for lunch at Wilson river but a huge tree had come down across the road about 200m from us returning to the main track. 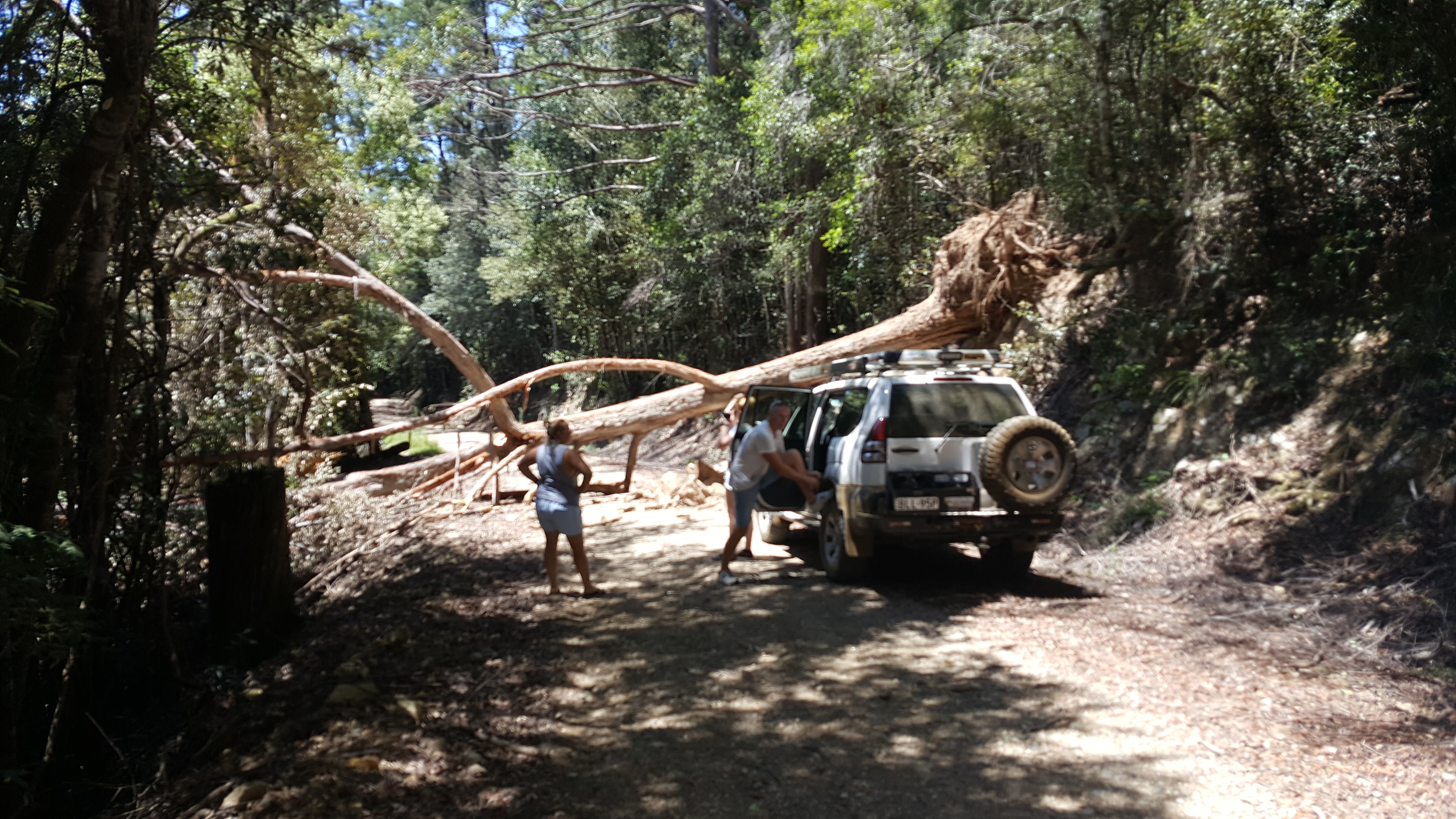 So we decided to head back to Brushy camp area and have lunch there while picking our next move. Lucky for us Toddy and Richard had been there in october last year and Richard knew of a track (called Rimau rd) that cut across the mountains back to the main road that would still het us to Wilson river bridge for a swim. The track had hardly been driven in a very long time and after coming across a tree across the track which we ended up moving we finally got to the river at around 2:30pm for a well earned swim. The water was great, warm on the top and cool down deeper and for a 40° day was just wonderful. After sitting in the water having a quick beer something grabbed my toe and scared the crap out of me, not to mention the girls. Out of the 4 of us i was bitten twice by some little fresh water eels, didnt hurt was just a little shocking when they did. And the little fish just swim all around you, not caring your invading there swimming hole. 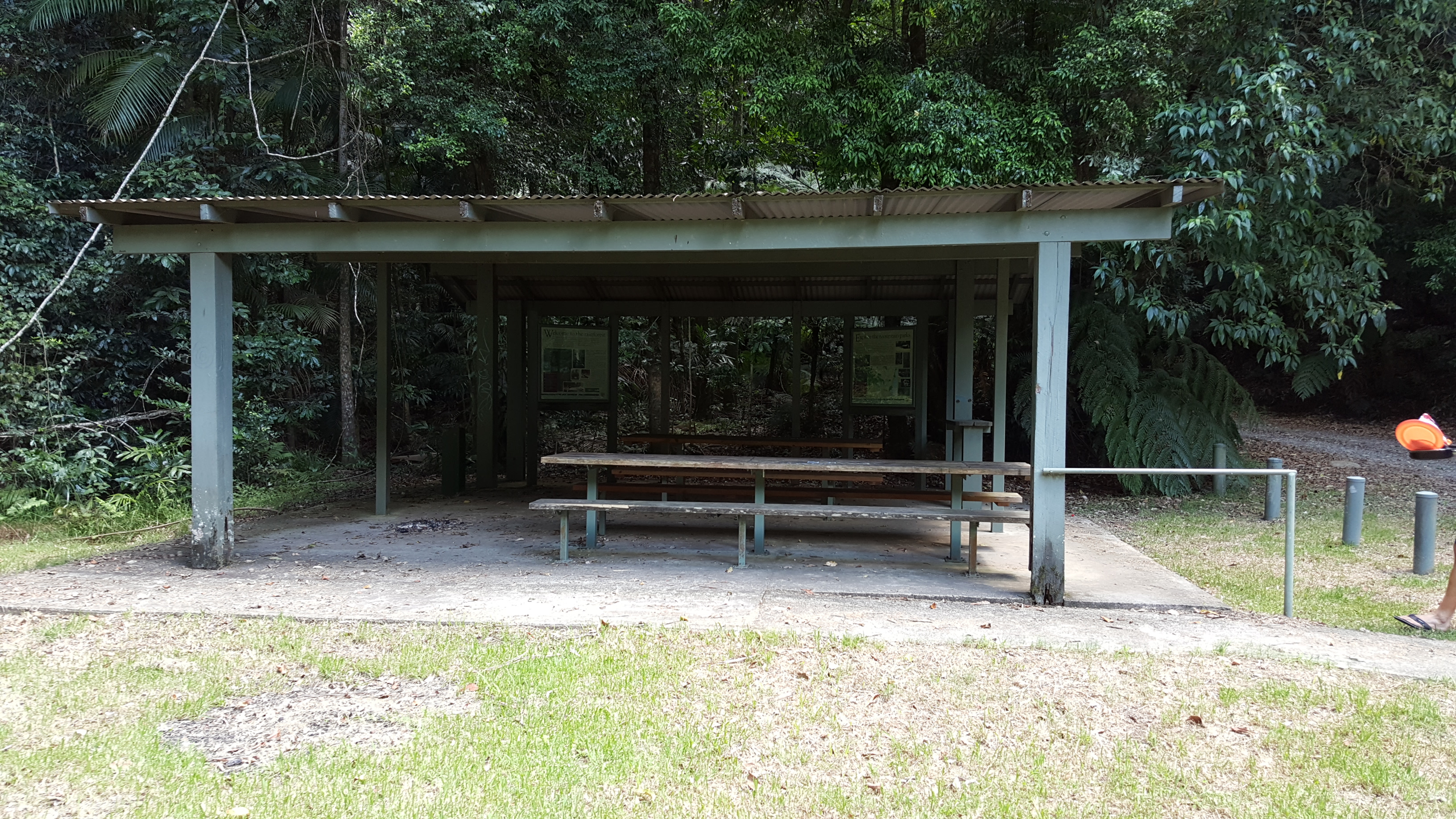 After a very nice swim here we were running out of time due to the big tree across the road and having to back track and take a 14km detour we decided to head up to Tower No.1 lookout for our final stop before heading down the mountain. 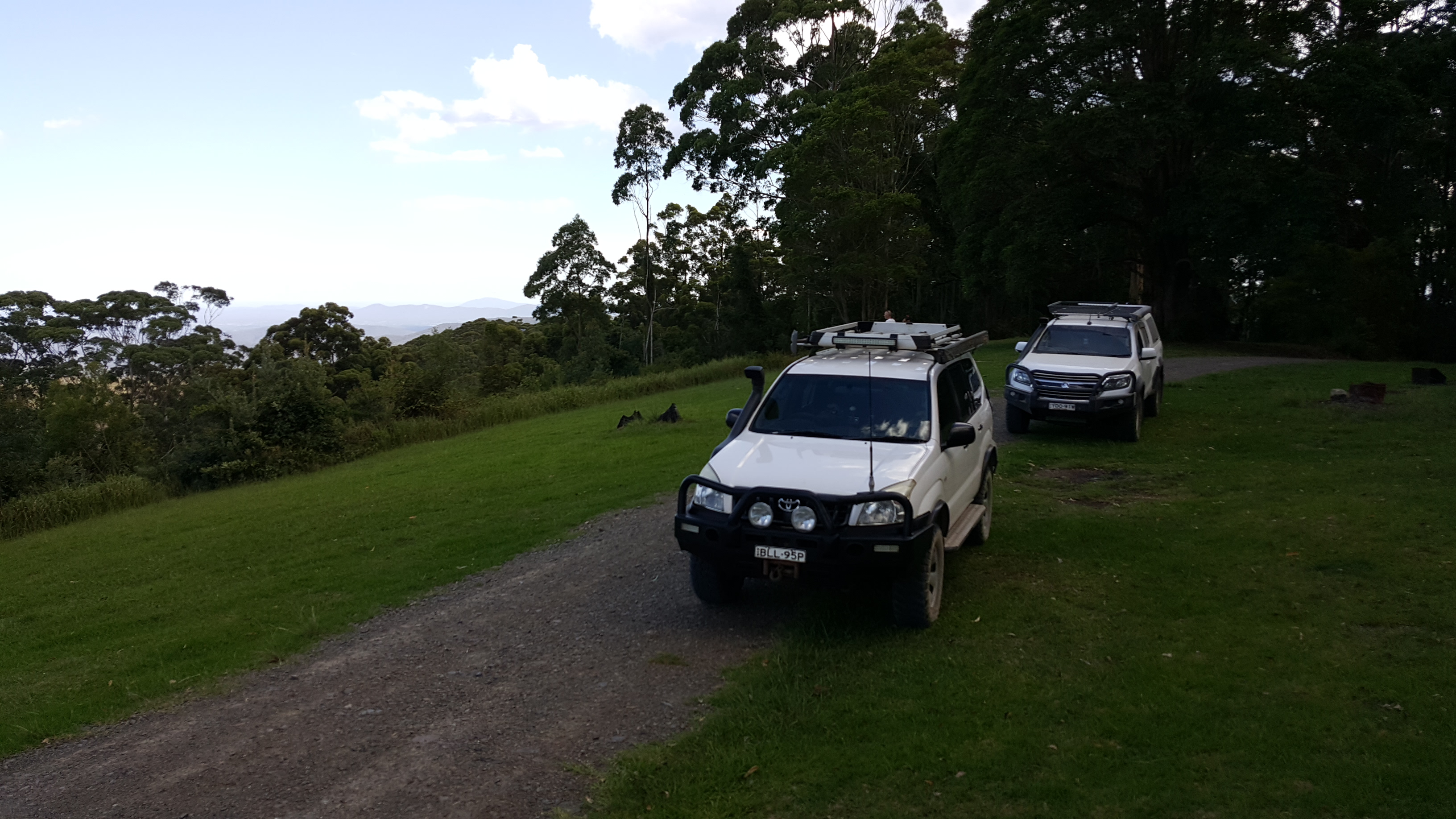 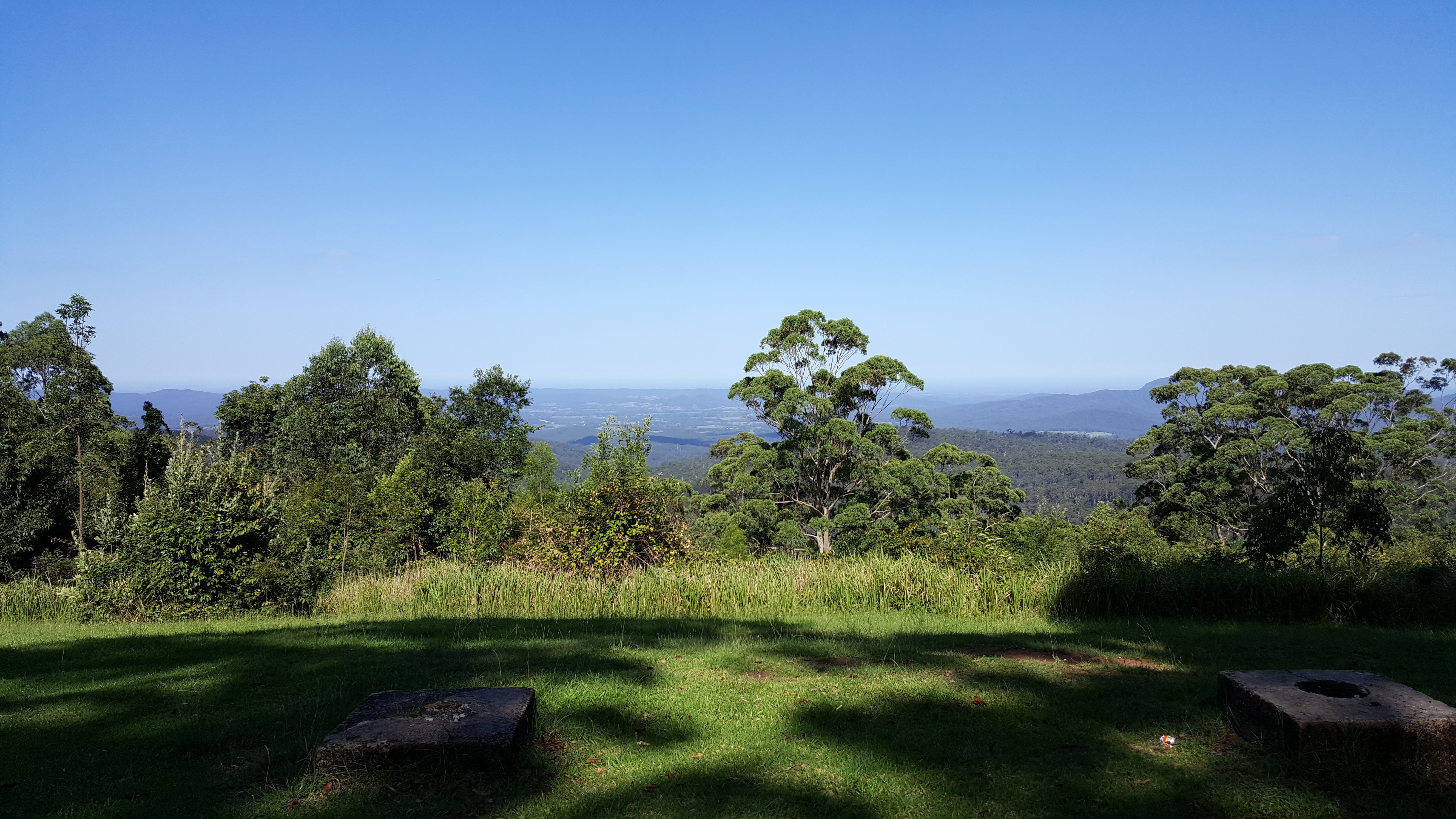 From here it was a run back down the mountain were there were alot of Bellbirds singing to the pub at Beechwood for a quick ale and a laugh. 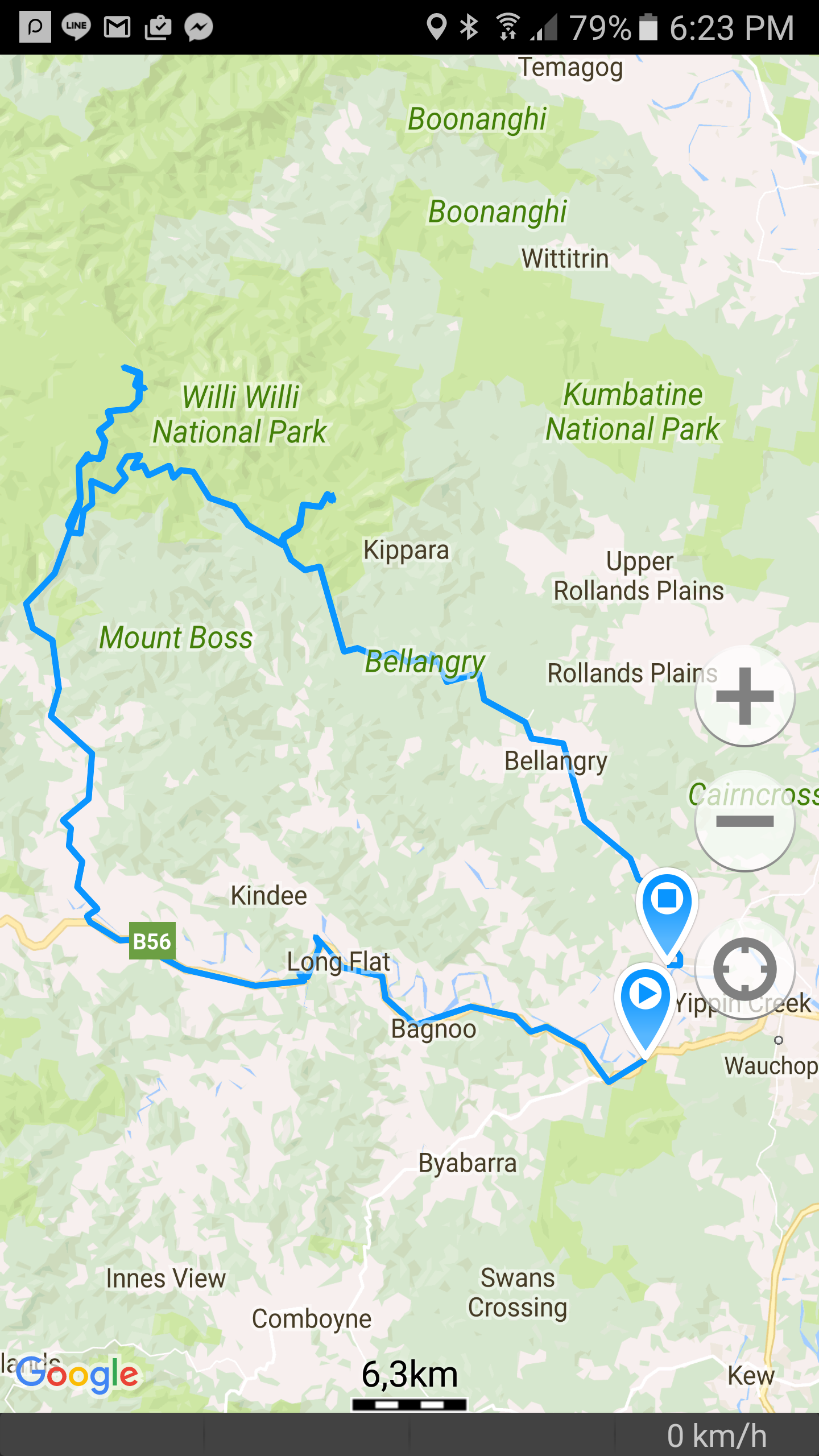 So for me we did around 800klm for the day, travelled to an elavation of 1200m and seen some great sights and enjoyed the day. Big thanks to Richard and Kaitlyn for leading the way and allowing me to tag along for the cruise. 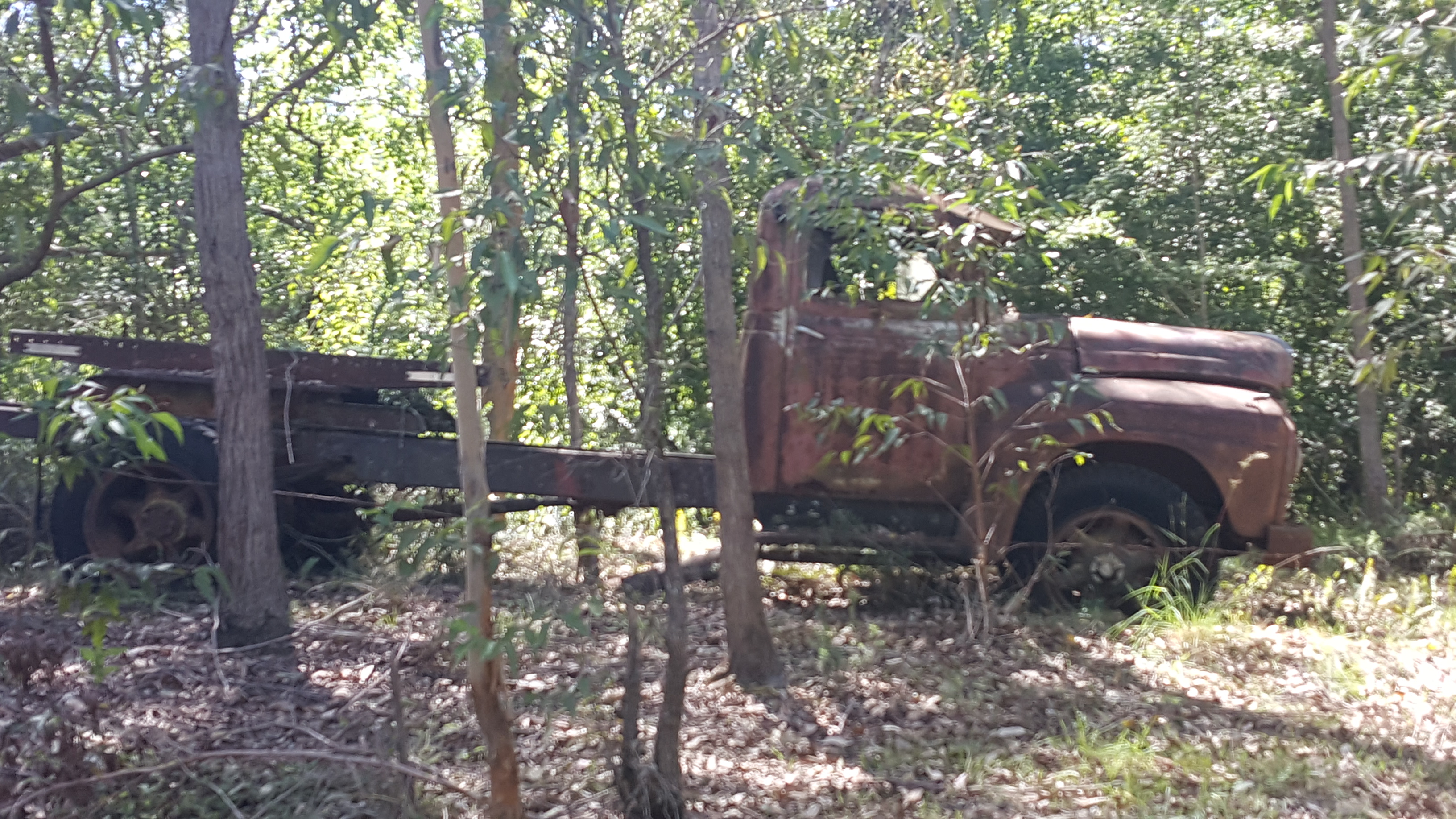 Had to whack that one in. Woulda hauled some logs out of the bush.

Very nice !
Thanks for sharing

Great photos of an awesome area mate. So green!

Great report Luthy. (Sorry but it is Caitlin... never mind)
As mentioned, the reason for the drive was to explore the Bril Bril area, mainly the Mines Road and find The Punchbowl but a few fallen trees and some time spent detouring meant we didn't make it but had a great day anyway.
Thanks heaps for Luthy and his lovely bride Belinda for driving the 3 hrs each way to join Caitlin and myself for the day.
There was no low range needed except for the climb up Cockerwombeeba Trail... 400m's to 1200m's. All easy driving and some spectacular scenery.
Glad you both enjoyed the day and got home safe and ON TIME
Last edited: Feb 7, 2017

The Kindee suspension bridge... the oldest in Australia.

An underneath view of what is holding you up!!!!! It was amazing at just how green it was in this area although being near Mt Seaview it is understanding (seems to attract any rain). His and Hers toilets at Brushy Mountain Campground. At around 1100mt's I really do want to have a winter camp up there. 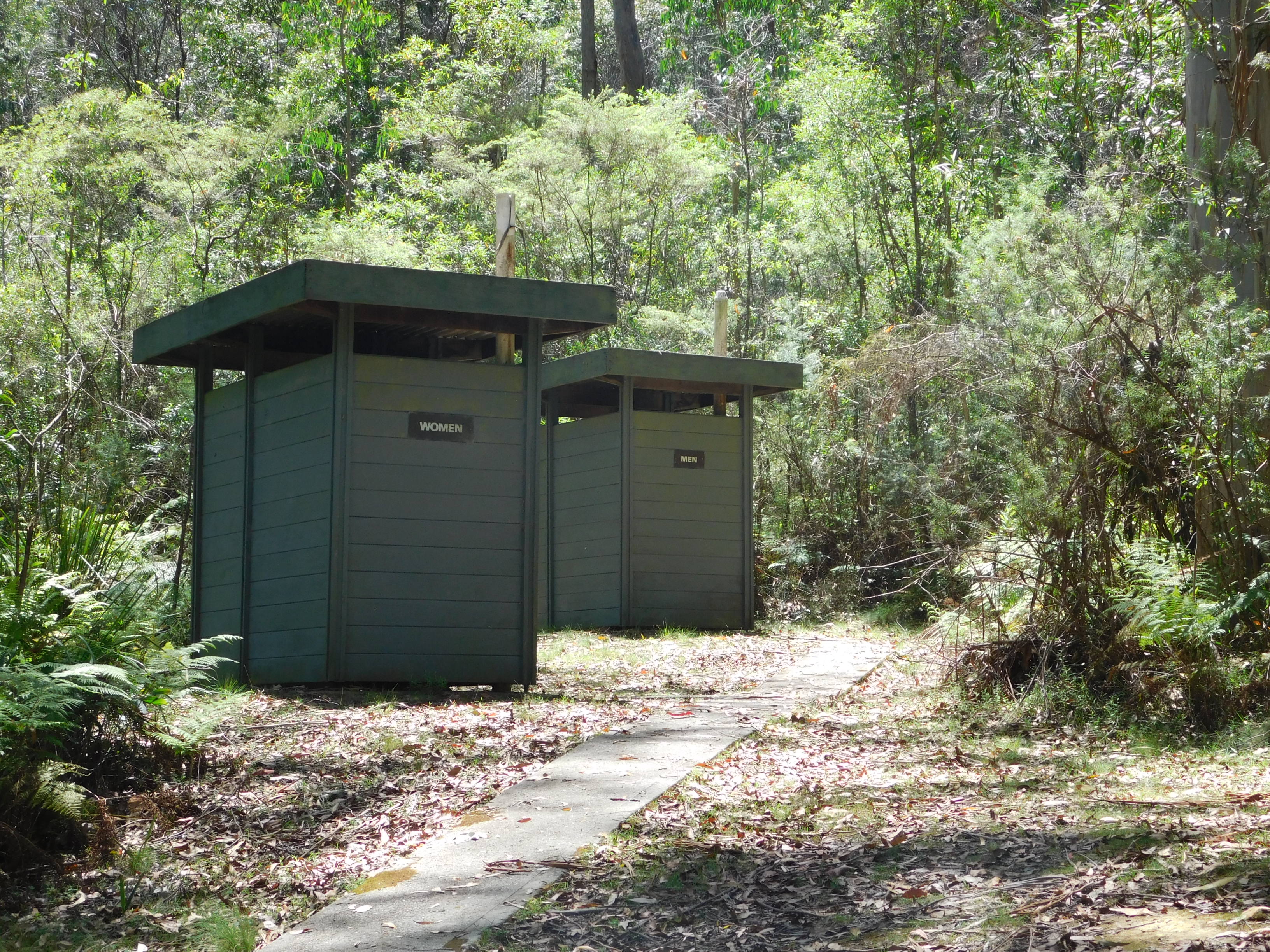 A tree that I though I could get over with no problems but with the ground still a bit damp up there it proved to be a be tougher than I thought..... but with a little packing on each side I got the Prado over. Then decide to get the saw out and do what I should have done first and cut the f@#$&*... at least it was easier for Luthy!!