planning some mods to the centre console which will require some extra wiring, okay a lot .
looking to instal 2 switches for spotlights 1 for the reverse spotie another for the fridge and a few spares . question is is 6mm big enough ,I am a plumber,if I need more water ,I place in a bigger pipe however if the source is no bigger I get more volume but a reduction in pressure does this follow with auto applications.
I have bought 4mm x1.85 wire to feed each switch from a 6mm feed breaking it down into a six way fuse box, looks okay as I can solder and covered it all tape.
1 off the points is for dedicated power supply to garmin thru a ciggie lighter fitting.

Thats five points, I do not know ratings and stuff but willing to give it try and understand if you speak slowly.
my panel currently includes oil pressure gauge all the locker switches 6 switches for the accessorries 2 ciggie plugs 1 from main battery the other off the second battery all with led lights carved out of 3mm aluminum plate. I would like a 12v clock say no bigger than 50x50mmso any ideas would be appreciated

you should really be using relays to control the lights and outlets...

That way you can use smaller wires inside the consol/cab to control the relay... The switches cant really handle the current anyway..

Ensure you have fuses within 18 inches of the battery too!

agree with gippsurfer you should be using relays to handle the power swiching to the lights, fridge out let cigy plug 1 x 6mm from acc battery for that, the rest should be able to run of another 6 mm run from main battery but i would use some circit brakers in the lines from the batterys about 60 or 70 amp brakers would do the trick

My suggestion would be to use 7 core trailer wire inside the vehicle to run all the low voltage items. Reason it’s neat and colour coded. I would put relays in to run the heavier loads of the lights and the fridge. Because of the distance (wire has resistance so the longer it is the bigger it needs to be to overcome the resistance and still carry the load) from the battery to the rear of the vehicle I would run at least 6mm wire to the fridge and the reverse spot light. There is a formula to work out the right wire size (distance + load + volts) I should remember it but always use wire a little bigger than needed just in case you want to add more load latter. Back to the 7 core trailer wire, you can use this for the trigger wires from your switches to your relays.
Hope this is some help
Kruzaman

1firefighter63 said:
I am a plumber,if I need more water ,I place in a bigger pipe however if the source is no bigger I get more volume but a reduction in pressure does this follow with auto applications
Click to expand...

Just like you might do some calculations to determine the size water pipe to use for a given flow rate to account for friction losses, there are formulas for this stuff too as you loose energy in the form of heat which results in voltage loss of the wire "pipe" is too small.

Here is is a good discission about how to size wires.

So anyway, what I would do is buy a distribution block or make one up like I did: 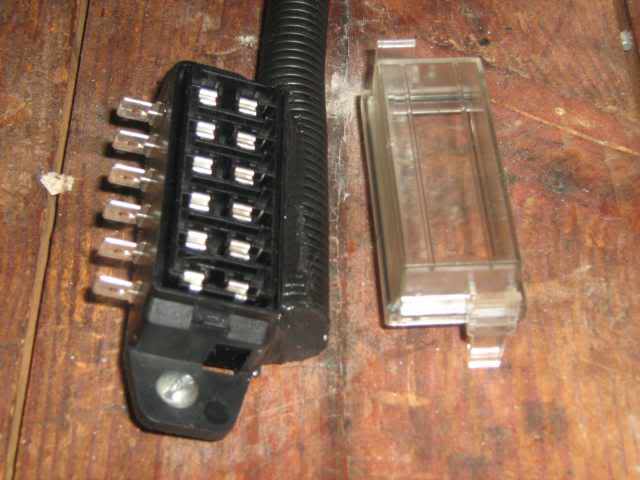 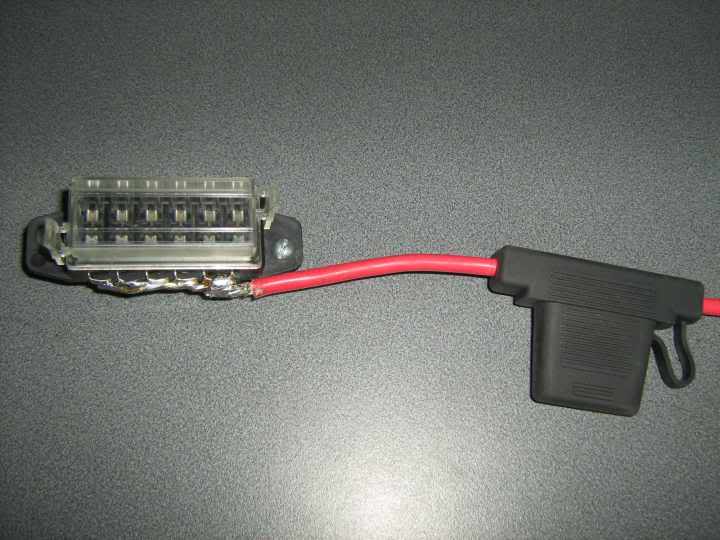 Because I bought a roll of the thick wire like on the maxi fuse, I use it for the ciggy lighter and spotties. I've done the calculations and it is big enough to get 30 amps to the back of a normal car (say 5 metres) without too much voltage loss.

Where I mounted a compressor and a pressure pump, I used 2 fuses and a relay for each one (20-30 amp fuses for the appliances and 3 amp ones for the low voltage side of the relay that goes to the switches). For the cig lighters no need for a relay, just use the right sized fuse (cig sockets are generally only rated for 10 amps, so perhpas a 15 amp fuse). The fuses should be as close to the battery as possible to protect any short in the wiring.

I've used a 100 amp maxi fuse as a master fuse. The other end of the fuse fly lead goes straight to the battery terminal without any extra wire (less chance of an unfused short then) and for spotties and ciggy lighters I would use the same sized wire as the maxi fuse.

G'day 1firefighter63, yes in theory the systems are very similar.
Think of it this way pressure= voltage and flow = amps or current, same plumbing principals apply ie big reducing smaller at the appliance.
As you know if you run water over a level area the static pressure remains the same at all points, flow rates get reduced by bends, Tee's , stop taps or valves etc due to turbulence ( leaving height out as eletricity is not goverened by gravity)
Although pressure is relative over long flat runs, current/flow is not and decreases a small amount with the longer runs due to kind of eletron turbulance just like a run of water in 1/2" over 5+ mtrs loses flow.
So same piping/wiring principal apply, run larger diameter cable for the longest run and most current drawing points , reduce in size off main run for low current draw items, though keep in mind when choosing wire size "start up draw" as some lights etc require more current (amps) to start up than their working load. (lic Plumber also mate, but do other work now due to stuffed back)
Have you done your limited eletrical licence? might be worth doing..

Fuse each branch line at the total amp draw of appliance on that branch with the amp rating of the branch wiring over that of the fuse rating for safety, use relay setups for high amp lighting (spotties etc) fuse only is fine for cig plugs and low amp lighting.

Here is a useful calculator

the fuse carrier I have done come up a treat, all lighting being added will Led. Great light low draw , map light, centre light ,rear cargo and reverse.The feed for the fridge will be as you , ,the brain trust suggested 6mm dedicated with fuse at battery .
Next question is do I make earth at rear of the truck, surely that would be the best [ I think ] for the fridge supply.
I bought a 120 amp fuse/ circut breaker for the supply side of second battery ,because I will fit a winch in the near future. Another question do I fit a similar type product on the draw side of the battery or fuse individually, I have a 100 amp circut breaker would that be too big or do I do the 60amp to rear and the same to fuse box I have built

If you are likely to add an inverter (which probably will need 30-50 amps) in the rear or a camper trailer with an extra battery down the track, I'd reccommend you run a 2 B&S (which is a big one!) to the rear of the car. Push the cable through some half inch clear plastic tubing for extra insulation and try and feed it along the inside of the chassis rail. Put your 100 amp circuit breaker as close as you can to the battery terminal. Its purpose is to protect the whlole circuit from a massive short somewhere. Add a 50 amp Anderson Plug (which could be added later) down near the towbar directly on this for the trailer and also run it to another distribution fuse block for your lights and fridges.

On this big cable, you'll need to either get somebody to crimp on the connector or solder them on pretty much exactly the same way you would solder a copper pipe fitting. This is pretty easy if you put the connector upright in a vice so you can fill it with solder. If it is just going to be a fridge and a few LED lights, you'd be lucky to draw 15 amps so I'd use the 6mm (4.5mm2) cable. You'd probably get away with just one 30 amp fuse at the battery end.

Here is a good reference page which I followed when I did mine.
Dual Battery Systems & Alternator charging

I'd recommend you run an earth back to the negative battery terminal (no fuses required). If you do use a fridge, also don't use a cig lighter for it, I use the Hella points.

Anyway, here is a what I did in the rear of my previous car for fridge and inverter: 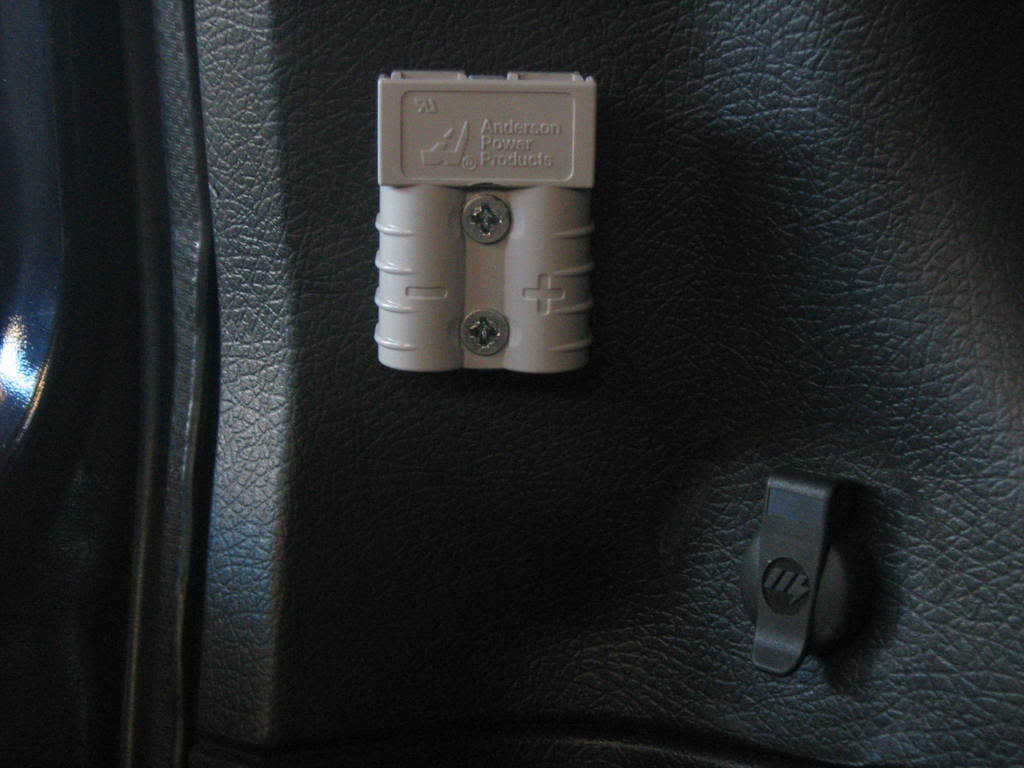 Here is what ARB did in my current rig before I added a canopy: 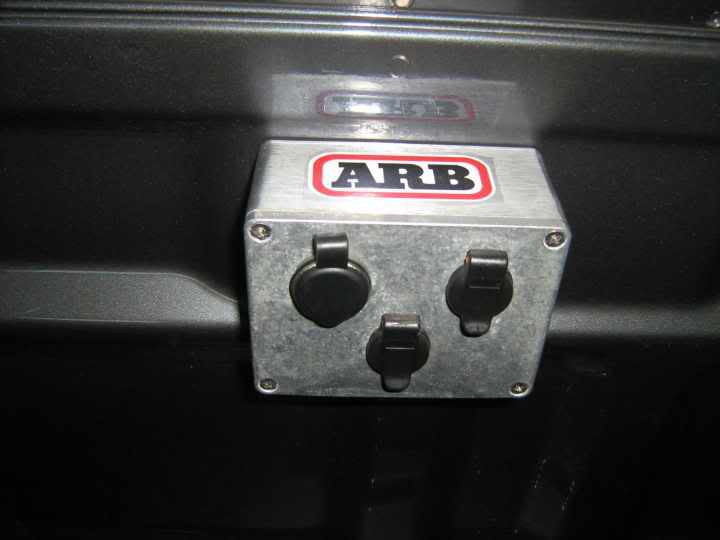 Extra Hella outlet in the front beside the glove box I added: 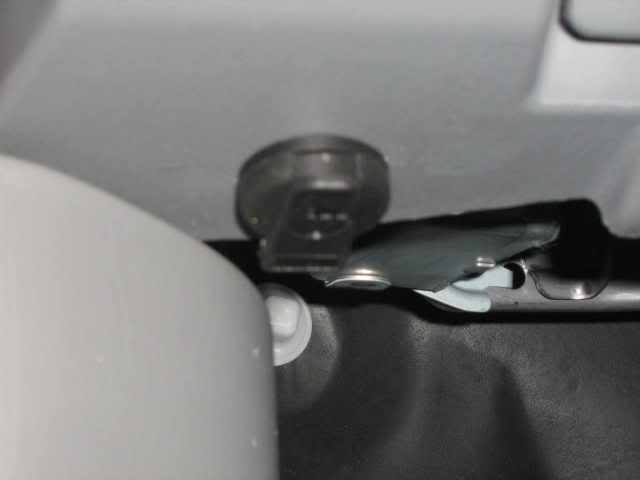 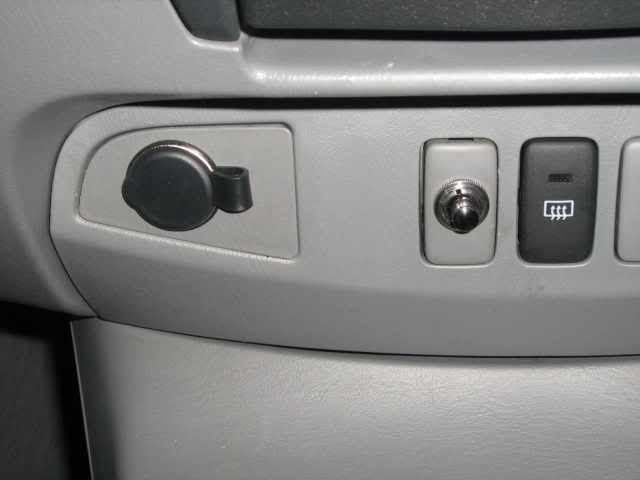 Push and hold in while winching or to jump start the car from the aux battery. This goes back to a wire on the isolator and it would be good to use an isolator which supports this feature seeing you are adding a winch.

all of you are fantastic,I have been piecing all this together from little bits of info and what feels right ,shows the wealth of knowledge the good earth holds. Given some spare time I should knock this over in say 10 or 12 hours ,getting good switches and the odd connector seems to be the hardest part,however the net seems to a good source.


And I am enjoying the challenge I have given myself,enjoying your company along the way

Your welcome mate. Hope I speak for all of us helping you out. It is nice to be appreciated.

I stumbled on a Auto electrical supply place, which has been great becasue they have everything you need under one roof. Believe it or not SuperCheap has got a lot of stuff. Jaycar is another place to get switches etc and they have a good on line store. (see Jaycar Electronics - Better. More Technical. ). Some heat shrink tubing of various sizes is great to have and sold by Jaycar or SuperCheap. Use a hairdryer or hot air gun to shrink it.

One of the crimping tools for the coloured (red, blue, yellow) crimp on connectors and terminals is handy too. The jaws are colour coded to the terminals and there is usually one called INS which you use to crimp the insulation lightly down onto the wire. I don't like the scotchlock joiners... I always use a soldering iron to splice into wires...
You must log in or register to reply here.
Share:
Facebook Twitter Reddit Pinterest Tumblr WhatsApp Email Share Link
Top