What have you seen?

rogerazz said:
I don't understand what anyone is saying here. I have never seen anything like everyone has explained.
Just like everyone else however, I do see like a golden haze around people's body????
Someone told me that it is an aura.
But that is nothing really cause I assume everyone else sees them.
Click to expand...

peterfermtech said:
If they are so advanced why do they keep taking pens?
Click to expand...

About 25 years ago. A mate and myself had just left a friends house in Ridge Rd Kallista, Vic. It was around 4am in the morning and we were driving up the hill heading back towards Belgrave. The hill is probably 600mtrs long and has a slight right hand bend about half way up. That section of road is your typical Dandenong Ranges road and is lined with tall gums either side. As we rounded the bend and were nearing the top of the hill. A large, maybe 50-100 meter Orange glowing object appeared, slowing making its way directly above us, moving from left to right. I would say it was maybe 100-150mtrs above the ground and took up nearly the whole windscreen of the LH Torana my mate was driving. It was traveling very slowly as passed over us and we had an unobstructed view as it was directly above the road. It was the colour of your typical glow stick, it didn't light up the trees or ground. It just glowed a very bright Orange. We couldn't see any apparent structure, just light. It traveled without sound and its speed was consistent at probably around 15kmph. We slowed right down until it had passed over the top of us and as we had just left our friends house. We decided to head back down to his place which was a bit over a Km or so away to tell him what we had just seen. It took a couple of minutes to turn around and get down to where the road levels out and there is a section of paddock where there are no trees, and being on a ridge line, we could see it traveling slowly over what was probably the Warburton Ranges around 25kms away. Our mate never got to see it, as by the time he came out, it was gone. The size was hard to judge, my mate reckons it was more like 300mtrs across, but you get the picture. It was massive and bright Orange.
A

When asked, Steven Hawkins said he did not agree in making contact with extra terrestrials, reason being that they may well turn out to be vastly superior to us and come to dominate earth
Moral of the story if they try to speak to you, just ignore them

a1bert said:
When asked, Steven Hawkins said he did not agree in making contact with extra terrestrials, reason being that they may well turn out to be vastly superior to us and come to dominate earth
Moral of the story if they try to speak to you, just ignore them
Click to expand...

I would think that if there are people out there capable of reaching Earth, then they have already done so and are well aware that we are here and what our capabilities are.
At the end of the day we have to hope that with the technological ability to undertake interstellar travel comes the maturity to not enslave "inferior" peoples.

If Aliens were real and some people reckon they have seen evidence in one way or another.
Then to have reached us would make them far superior to us earthlings.
So why the hell would they bother with us.
Probably went past earth, saw us and reported back to their leader, ... " Spaceship Commander to Leader,..... Nothing to see here, .....over and out"

I think I've had a few mates get possessed by aliens by the way they were talking. Come to think of it I may have too.
M

They'd be studying us like we study monkeys. They would abduct a few samples to disect and test, but in general just observe in my opinion.
They may not be aliens, but could be travellers from either the far future or from other dimensions. The possibilities are endless.

Some of our politicians are so out of touch I think they are from another planet and not a superior one.......

All jokes aside.
I saw a strange light in the bush many years ago and it scared the #$%^out of me. We had been spotlighting and found one rabbit in back of ute had not been cleaned when we got back to the farmhouse.
So I went out after dinner to clean it and took the rabbit down to the creek about 200 metres from the farmhouse where it was pitch black.
Half way done I suddenly saw a bright light in the trees across the creek and I took off back to the house, nearly impaling myself on a steel star picket in the ground. To this day I still have no idea what it was. Maybe it was a Min Min???

When you think of the advances us earthlings have made in the last 150 years, in the scheme of things there could be civilisations out there a million years more advanced. Probably no fuel taxes if they can get here.

barcher said:
Probably no fuel taxes if they can get here.
Click to expand...

Camped out at Haddons Corner earlier this year.

Woke up around 2am ish, and there is a white light with a mans shadow in it, assumed it was my mate travelling with me getting rid of the evening fluids... until the next morning when he told me he crashed just after i had around 11 pm and didn't wake until sunrise.

no-one else in the area, and no tyre tracks other than ours coming in and out.

Well I'll never be able to afford a space flight so my only hope is some aliens come and take me for a joy ride.

peterfermtech said:
I think I've had a few mates get possessed by aliens by the way they were talking. Come to think of it I may have too.
Click to expand...

Normally that involves me getting possessed by Bundy.

Saw a tassie tiger , I was leaving a job late afternoon at Balnarring race course 2003.
L

Many years ago, on a multi-day bushwalk, three of us were in the Ettrema Wilderness (south of Sydney). We’d climbed a waterfall in a narrow sandstone gorge in the late afternoon and needed to make camp a few metres from it because there were no other sites nearby – the creek continued without banks so we opted to string-up a flysheet and sleep on the rock bed in the open.

The other two blokes were busy making pre-dinner tea on the campfire to replace the fluid we lost during the day – we’d typically have several mugs of it before dinner. So, I decided to climb up the nearby ridge-line to look at the view east towards Nowra/Huskisson which, as it turned out, was obstructed by several tree lined ridges.

The sun was now well and truly set and the bush was only visible by starlight in that typical night-time gloom, it was a moonless night.

At some distance away, following the tree tops of an ascending ridge-line, I saw this white orb slowly floating from right to left. Based on the distance, the orb had a huge diameter and glowed pure white. It then appeared to enter the ridge and disappear without trace – no burst of light or sparks.

There was no point shouting to the others because the sound of the waterfall deadened all other sounds, and the incident only lasted a few seconds.

It certainly was not a helicopter spotlight, plane, or anything resembling a man-made object. And, it’s line of travel parallel to an upward sloping ridge was too exact for a natural occurring phenomenon like ball lightning.

On returning to the fire I didn’t mention it to the others simply because we all would’ve just shrugged our shoulders and dismissed it as being a typical unexplained event.

We did hundreds of trips in remote areas, and I often wonder how many times we didn’t see ‘things’ in the bush, but, ‘they’ saw us!

Based on the incomprehensible size of this Universe (because there may be others), it would be lunacy to dismiss the existence of intelligent extra-terrestrial life, and no doubt to many of those civilisations we’d be little more than a bunch of chaotic amoeba in a Petri dish.

A very humbling picture was taken by the Hubble Telescope (Ultra Deep Field Images). Neil deGrasse Tyson (well-known Astrophysicist) explained it quite simply: take a grain of rice, hold it at arm’s length so the end of the grain is pointing towards you. What you see of the rice is about the area of space in the photograph.

The photograph shows about 10,000 galaxies with estimated distances up to 10 billion light years! And, there are more beyond that which we can’t yet see – they will be revealed when the next generation of space telescopes are launched e.g. the James Webb Space Telescope.

The poster on the back of our toilet door sums it up: ‘Sometimes I sits and thinks, and sometimes I just sits’! 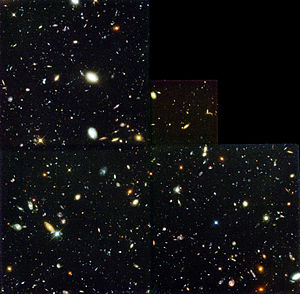 Here’s another I just remembered:

A work colleague, who I’ve known for the better half of 35 years, had a scary experience whist alone in the bush.

‘Jock’, a typical Scotsman who is down to earth, stubborn and doesn’t suffer fools easily, was on a site inspection many years ago up near the Central Coast (NSW) on the F3 Freeway. He was inspecting the layover areas within the Dharug/Brisbane Water/Muogamarra National Parks.

At one of the layovers he decided to follow a worn foot-track that led down into a valley. He only walked a short distance from the Freeway because it was outside the scope of the work he had to perform. These tracks are often used by various people for ‘unsocial practices’ so he wanted to identify if these practices also resulted in noxious litter in the parkland.

Apparently the slope dropped down quite severely and he stood at the top of the drop-off point overlooking a broad gully with many large boulders strewn in the creek bed below. In the sunlight, unobstructed by any trees or other things he saw perched on one of the boulders a small number (family) of, what he described as tall, hairy, human sized anthropoids. They saw him, stood up flailing their arms around and looking aggressive. He didn’t hang around to ‘make friends’ and quickly returned to his car.

I questioned him about the incident many years after it occurred and he was still shaken by the experience. He is not a man to tell tales or anything even slightly exaggerated, but he swears blind those creatures did not resemble any type of monkey or ape he’d ever seen in known literature. (Even ‘Coasties’ aren’t that hairy or likely to be found that far from a pub! )