well got back yesterday from our first trip to the high country and all i can say is it the best place iv eva been too. so much stuff to do and see.

we started off early boxing day meeting in ringwood BJ70 (me and jarrod) D20 nav (lee and mick) gu Patrol (Kingo / Kingswood???) at 9am and onto east link our other 3 where ment to meet us in berwick but where running a little late so we met them at licola...
Newish Jeep (con) hilux (igi and narse) FJ70 (alex)

off we went starting on glencarne licola rd, onto black soil track where the fun began, we all stop an droped our tyres to 18psi, onto macalister river what a river it was id live there for eva if i could.... camped up the first night just off the river... had quite a few drink some had more than others as it was eveident in the morning.... washed up had bacon and eggs and off again my co pilot was a bit under the weather from the night befor and didnt seem to like the tracks that where ahead... onto butcher country where we had our first taste of what the high country hill climbs had to offer.. STEEP LONG and ROCKYY!!!!
what a track a must do if you go... we changed routes as the route we chose would have taken far to long (Zeka to wonangatta to wombat to cynthia) so off down butcher link trk.
onto dingo hill trk to caladonia river trk to the main road.... dingo hill had many switchbacks which some 4x4s had to reverse for every one but no dramas with my shorty it was very steep but must have been graded recently as it was fairly easy.
onto the main rd. head directly for the BULFF!!!

on the way we had a few dramas one on our convoy had rolled 3 tyres of the rims and total all 3 rims and tyres, lost control on lose gravel and ran into the enbankment
we sorted put haveing to put one of kingos 33inch patrol rims on the front to limp to the next camp..

been so close to billy goat bluff we thought it was the best option to go down it to get closer to dargo and set up camp on crooked river.

at the bottom we headed for camp as by that stage every one had had enough..

we found an awsome spot on crooked river to set up bast camp for the remander of the trip.

again a good night but every one seemed to go to sleep early this night dunno why????
(SOFT)

the next day off to dargo where kingo decided it was time to call it quites and head home to his MRS.... the other guys went to wonangatta to get some spare tyres of a guy called dave picked up 3 spare muddies for a good price.. and we had lunch at the Dargo hotel as you do, got supplies for the rest of the trip (Well most of us did?) then head back to camp
useing randells tracks as our gate way to and from dargo high plains rd. its steep and rocky like most 4x4 tracks in the area...

we got back and decided time for a swim as it was hot!!!.

once it cooled a bit back to the tracks heading on crooked river trk crossing all 100 river crossings (seemed endless) up bultown spur down colling wood spur awsome tracks once again steep and rocky.

next morning id decided to go do blue rag range instead of wombat and wonangatta trks as i had to see the veiws every one had spoken about, first we had to wait for lee to go back to dargo to get fuel and food as he didnt remember the day befor that dargo was the only place to ge fuel from???

on we went up randells again onto dargo high plains rd. a furthr 30 mins up the road there we where on blue rag!!!

the ridge line veiws we breath takeing !!!! the trip down to the river from there really did seem endless steep steep more steep then rocky steep!!!! easly the longest hill climb/ decent, we did. we had left alex's FJ70 ontop of the ridge line as he had a leaking rad. hose and didnt want to risk loseing the motor..

if your short on time or if the weather looks to turn bad dont do down to the river from the ridge line views as its long and steep and would hate to have to go up it on the wet... it would take for eva...

we duct taped up the hose and headed back for camp... the return trip been all down hill was easy...

the next day it was time to leave, we all packed up and headed for dargo via randalls again, the guys in the back of the convoy got held up with alexs rad hose and they decided last min to change it.

as thats it the windy trip to the princes was long from dargo.. the trip on the HWY was longer....

here are a few photos i took 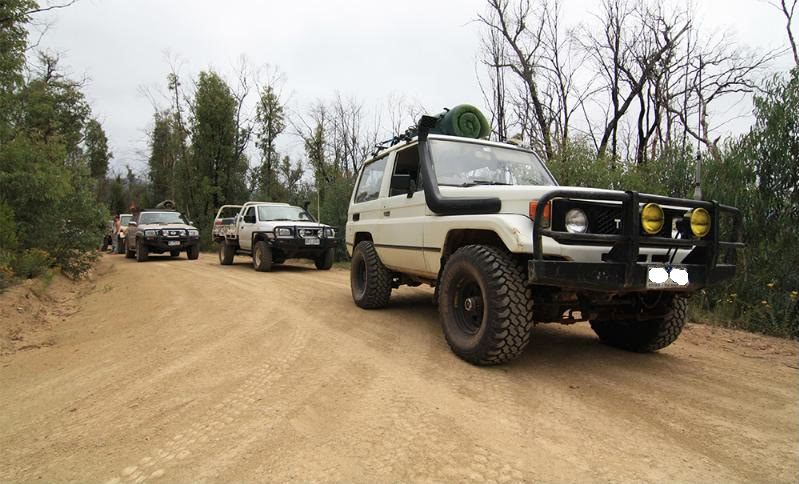 at the start of black soil track getting the tyres ready for the trip.

the first river crossing at the start of macalister river trk. 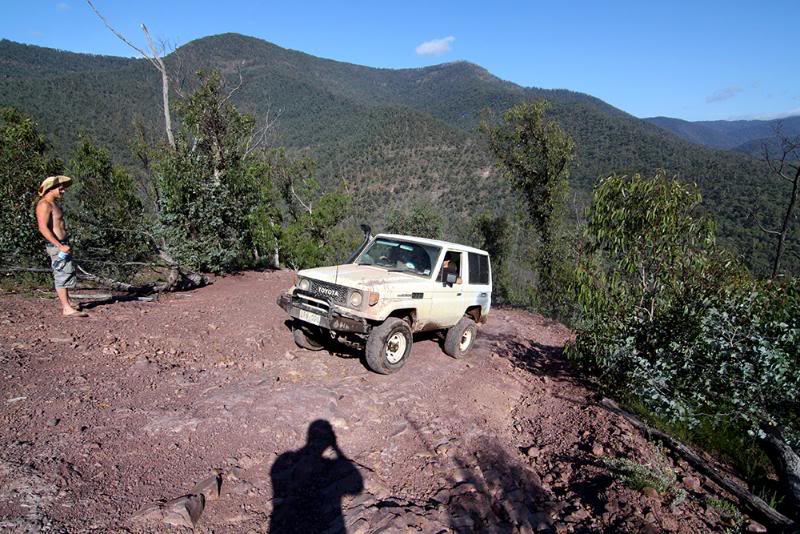 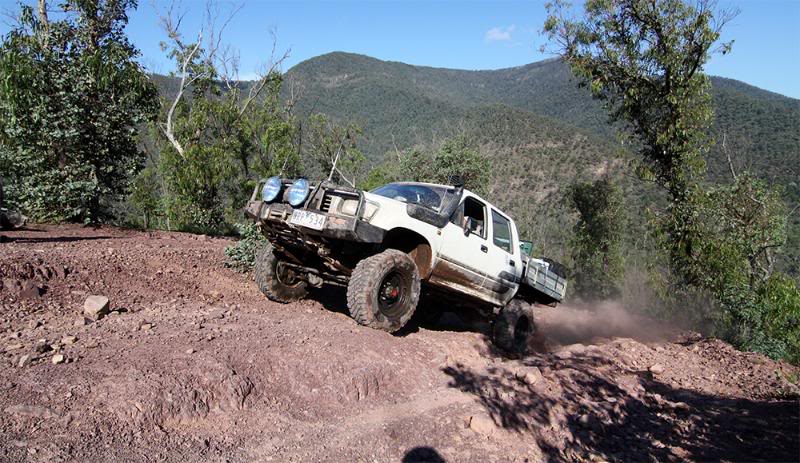 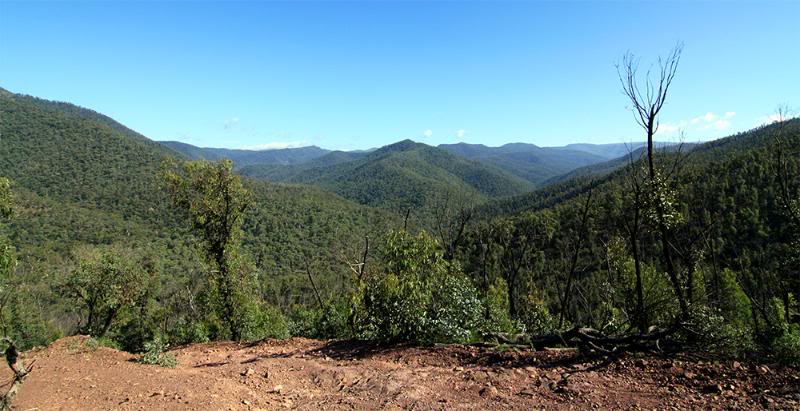 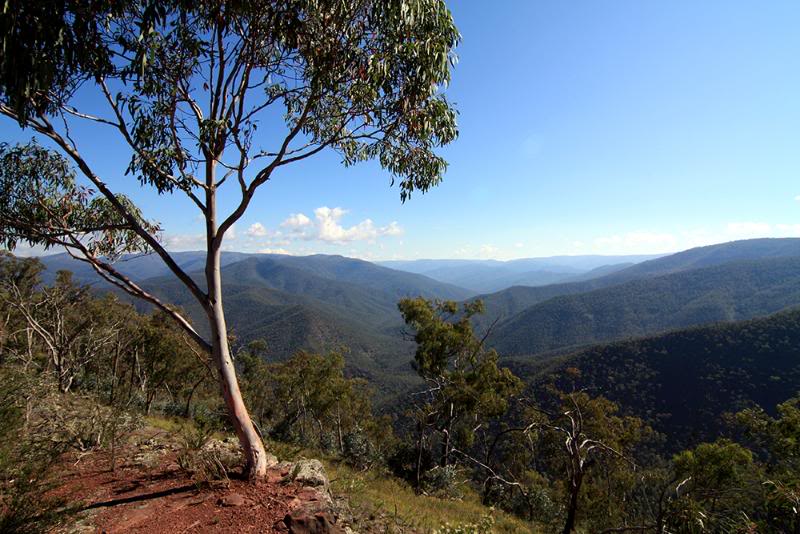 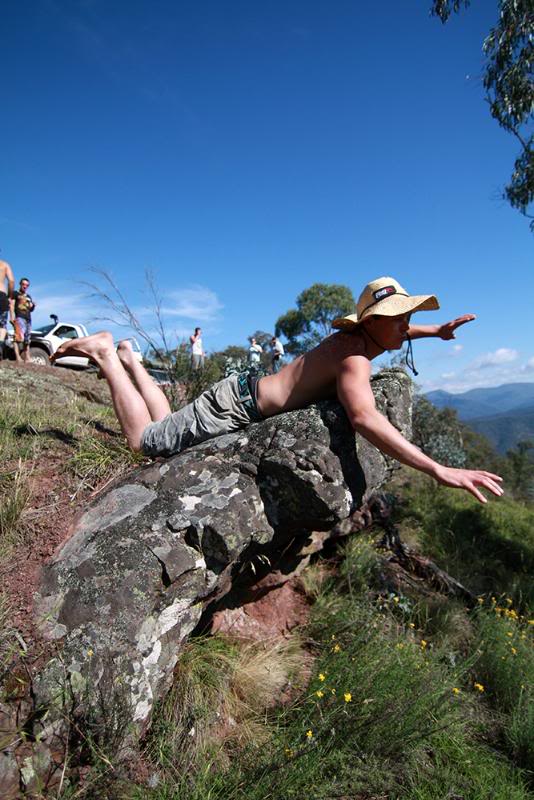 some one had a little to much to drink last night?? 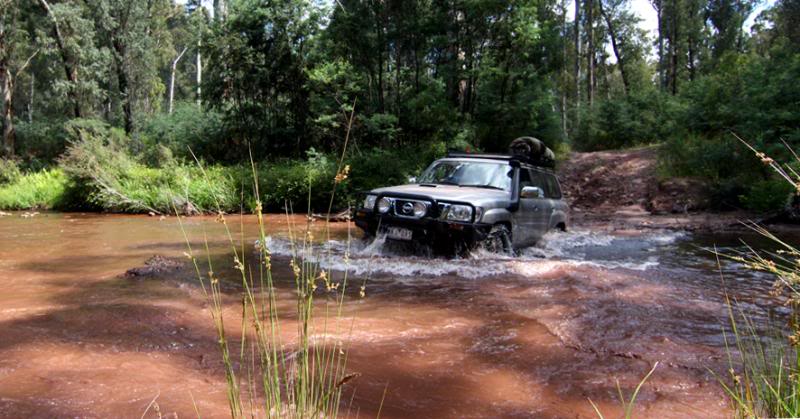 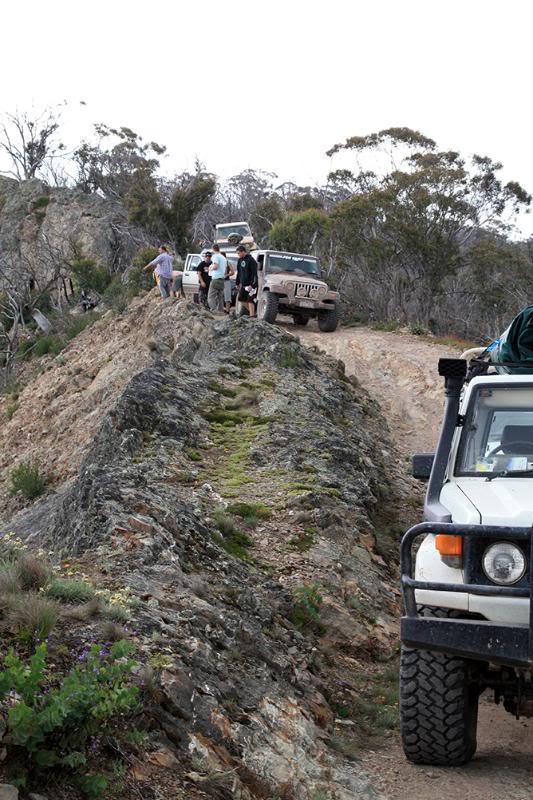 the wall on billy goat bluff and the lookout 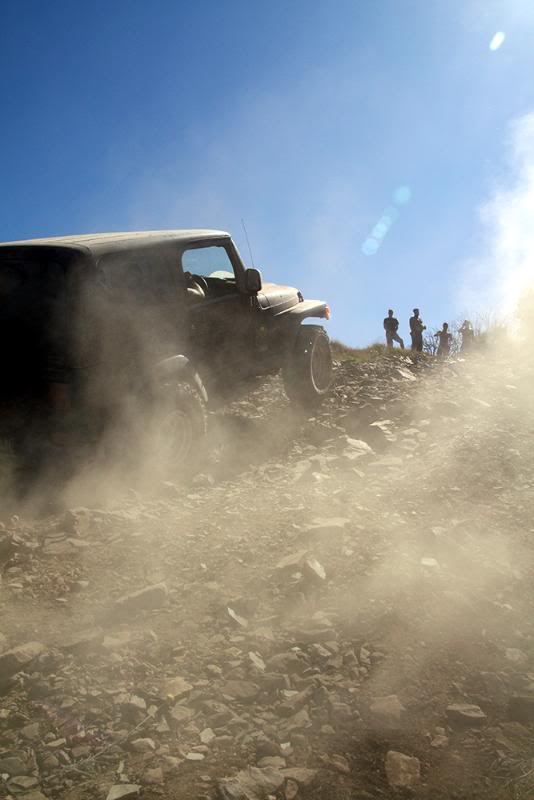 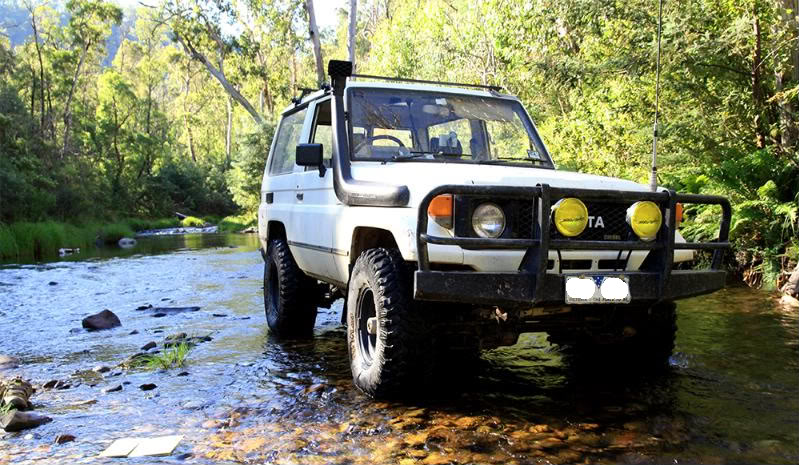 Great pics mate, looked like you had a ball.

Great report and won't take u too long to decide where to go next time, will it

cheers jok...
nah it wont grumpy but it will have to be a 4 - 5 day trip min again cause theres simply too much too see and so far to drive to get there

Looks like you had a ball! Great adventures, great memories! Thanks for the report.

Great report Phil, i like the way you made note that i went home early because of the "MRS" LOL. You made me look bad man, you could have said because his MRS was prego and about to drop,,, and felt he should be there to see the birth of his son. Oh well as it turns out still waiting but i agree with everything you said buddy. Gota get back real soon but a bit slower next time i realy wanted to see some of those huts and a bit of history.
I will also post some pics soon as i down load them.

i was going to tell the boys about the pregas MRS but thought a bit much detail + sounded better just saying you had to go cause of the MRS!!!! ((WHIP!!) whiped... HAHA!!!

good photos mate you gotta get an SLR man you wont look back,..

im lazy i really should have been shooting in RAW format so i could properly edit photos once at home but oh well. still turned out ok..

nice fish man,,, and the pics you got of iggies car really show the picture!!!

lee was so pissed one night he started calling iggi, ZIGGI fair funny!!

Great report and some great pics it's a top area and yes you need more time to take it all in. cheers

phs said:
i was going to tell the boys about the pregas MRS but thought a bit much detail + sounded better just saying you had to go cause of the MRS!!!! ((WHIP!!) whiped... HAHA!!!

good photos mate you gotta get an SLR man you wont look back,..

im lazy i really should have been shooting in RAW format so i could properly edit photos once at home but oh well. still turned out ok..

nice fish man,,, and the pics you got of iggies car really show the picture!!!

lee was so pissed one night he started calling iggi, ZIGGI fair funny!!
Click to expand...

Lee is a crack up,,,,not sure how to take him sometimes. One minute he is talking to you the next thing he looks like he wants to stab you... I do need a SLR Camera so badddd, but they are so expensive and im not sure what to get,,,, so i dont want to rush it.

he takes some time to get to know but he's alright we have been close mates since we where 13.


as for the SLR. just tell me your budget bud and ill have a talk to you about what your options are.
and ill be able to tell you the best place to buy from too, if you do get a cannon my mates still useing my stock len's but he recons he will be getting a lens soon so your more than welcome to use those 2 when he gives them back.

dont rush it due to lack of cash and buy a cheaper sony or pentax, just save a little more or in the close future you'll regret it.
as i found out i made a good pic with myn as my next upgrade for a better body to improve IQ is going to set me back over 4,000, which i dont have the cash for any time soon, so ill have to make due.

dont be fooled by the mega pixel war either as the fact is cause it might have more mega pixels wont mean itll take better photos, my next camera will be a EOS 1D MKIII and its 10.1 mega pixels the EOS 500D has 15.1 mega pixels and the 1D takes photos with high IQ as the sencors been developed better the the quality of this 10 mega pixels are far better of those on the 500D.

on your budget youd definetly be looking at buying a croped sencor D/SLR nothing wrong with that again much better buying a good croped srncor than a cheap full frame.
Last edited: Jan 1, 2010

Looks like it was a top trip, bought back so many memories of our 9 day trip there last year, we did from Corryong to Mansfield via Omeo, Dargo, Farm Junction and Wonnangatta Valley.

Those rolled tyres must have been a pain especially with the damage to the rims. What speeds were you travelling at when the tyres rolled.

If anyone wants a full trek note diary for a High Country trip trip just PM me and I will email you a copy.

thanks for the report

it certainly is a very special place to visit.

now you've had the entree you'll need to plan a longer trip to see it in more detail.

thank god for eastlink it certainly makes the trip easier with the first set of lights only found in yarragon.

BEK said:
thanks for the report

it certainly is a very special place to visit.

now you've had the entree you'll need to plan a longer trip to see it in more detail.

thank god for eastlink it certainly makes the trip easier with the first set of lights only found in yarragon.
Click to expand...


as for next time i will have to do zeka, wonangatta and wombat range trk for sure there the only trks i wanted to see and didnt, but we did alot of trks that we didnt plan like caladonia river and dingo hill.

Nice one Phil and others

Great part of the world up there. Did you take the trip from Blue Rag Trig down to the river??

Thanks for the tripreport phs I'm itching to get back up there as I was there just after Xmas great country side up there blue rag and south basalt are fairly hairy I thought........

You guys are just making me want to go on a similar trip even more.