We met up at the BP in Longwarry at 9:30 AM. It was cold, but not raining and there was a bit of sun about. That was all going to change.

Six of us turned up for the days driving

and one black 2010 JK Jeep Wrangler driven by Simon, a friend of Aaron ( XQZME ).

We all took off and drove to the trail bike unloading area to air down and start the days driving.

Airing Down for the Day's Driving 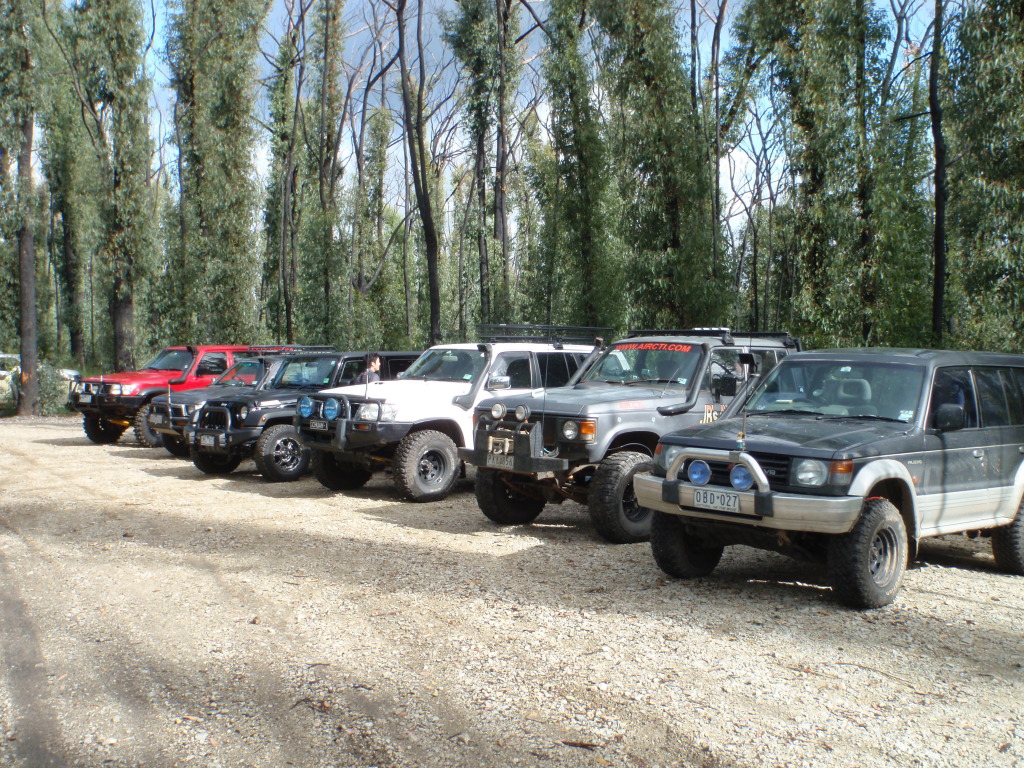 Like most other times at Bunyip, we headed off along Robertsons Creek Firetrail with a view of heading to Bullock Link Track and some of the others in that area. When we got to the bottom of the first steep section of Roberstons Creek Firetrail, we came across the Jeep 4WD club with about 8 to 10 vehicles in various stages of climbing the hill. Given the super speed at which these Jeeps were moving, we decided not to wait and veered off Robertsons Creek Firetrail and down Rocky Track. It was a lot simpler going down as opposed to the usual climb that we do.

1. The rock steps, which are pretty easy going down were a bit more difficult this way
2. At the bottom of the rock steps, Simon switched off his new 2010 JK Jeep. Lets just say it didn't run again all day, at all.
3. The next couple of sections required snatching and winching, and then we got to the bog holes.
4. After the bog holes, more snatching and winching, then came the thunder, lightning and hail. Never seen hail like it. It really did turn the tracks into rivers.

The Hail along Bullock Link Track 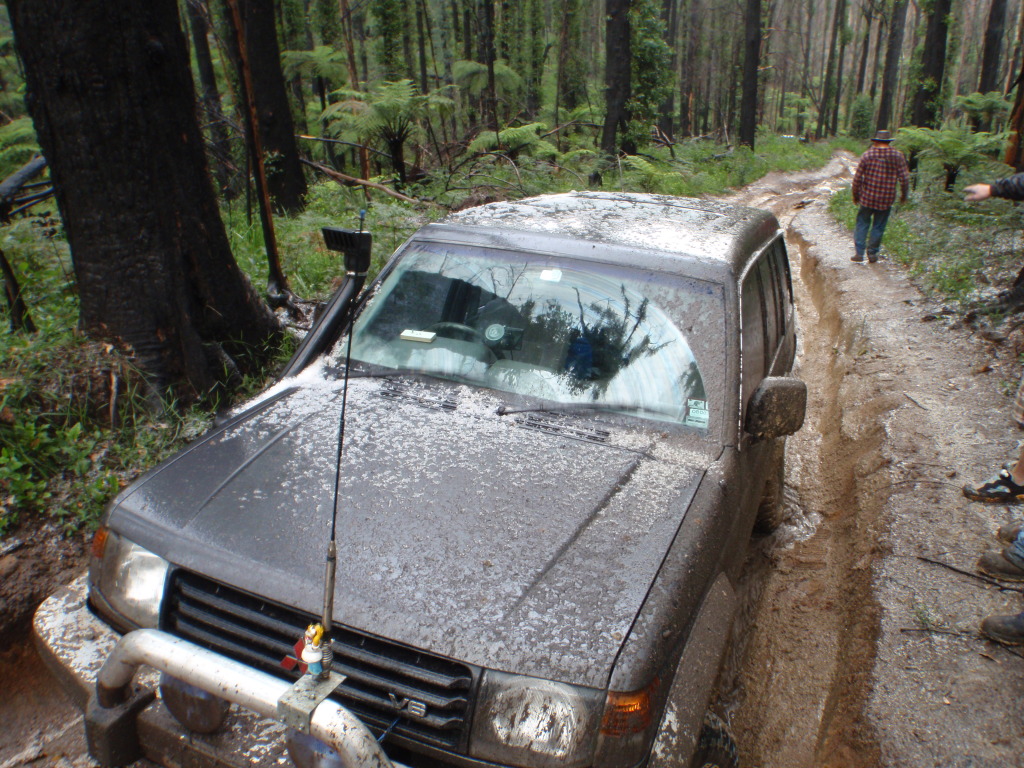 Thanks to John ( jbs4wd ) who after winching himself out of the bog hole and securing his rig to a tree, he then winched everyone else through. No one made it under their own steam.

Funny thing was, we had to winch Simon in his Jeep into the bog hole first. 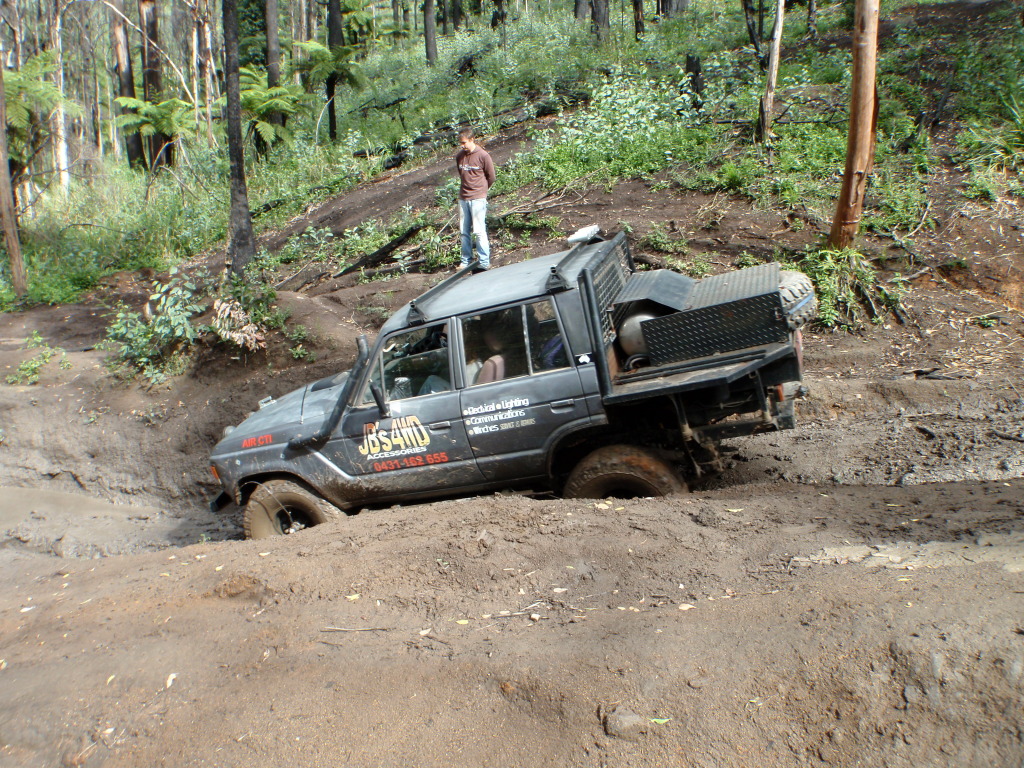 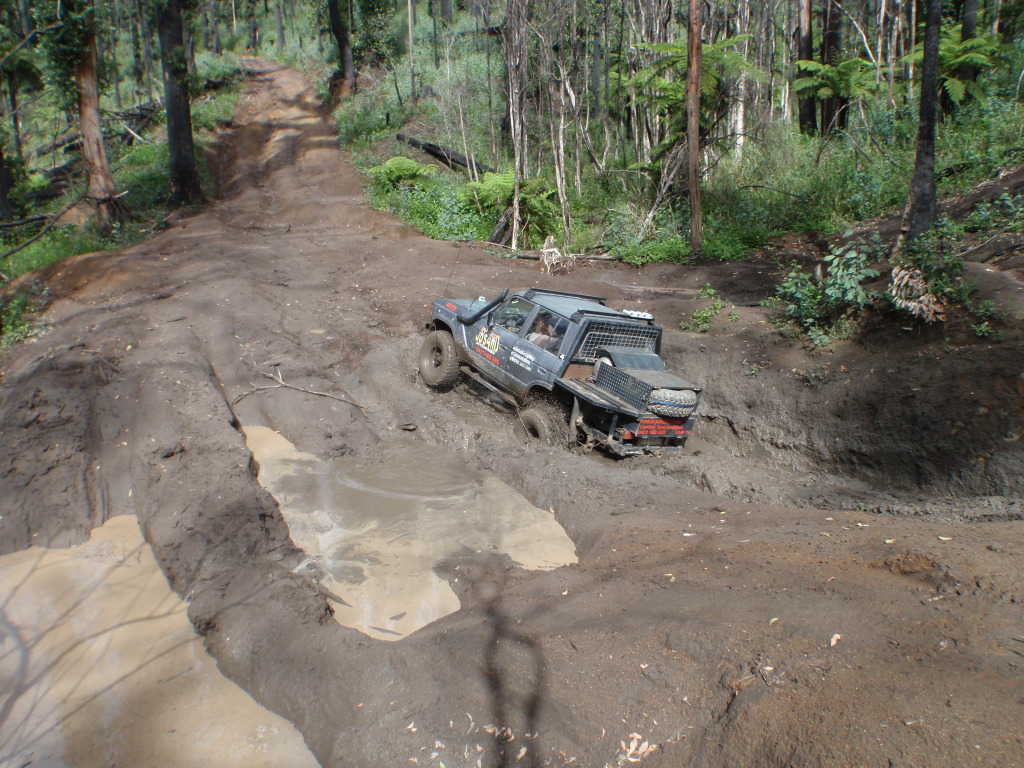 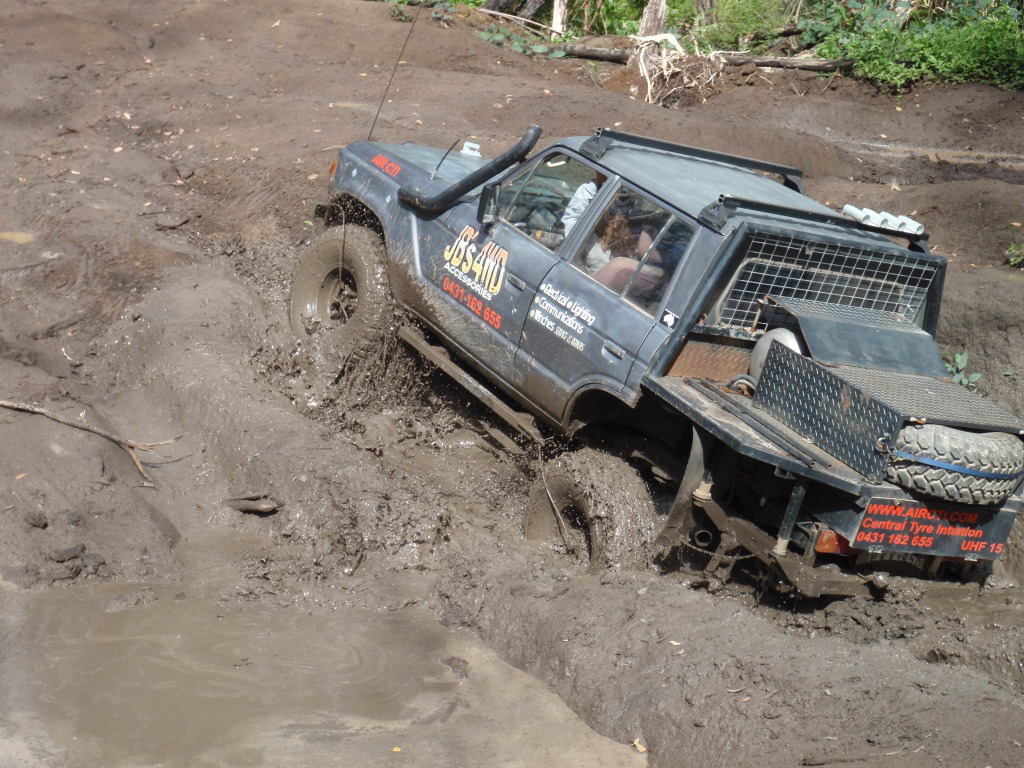 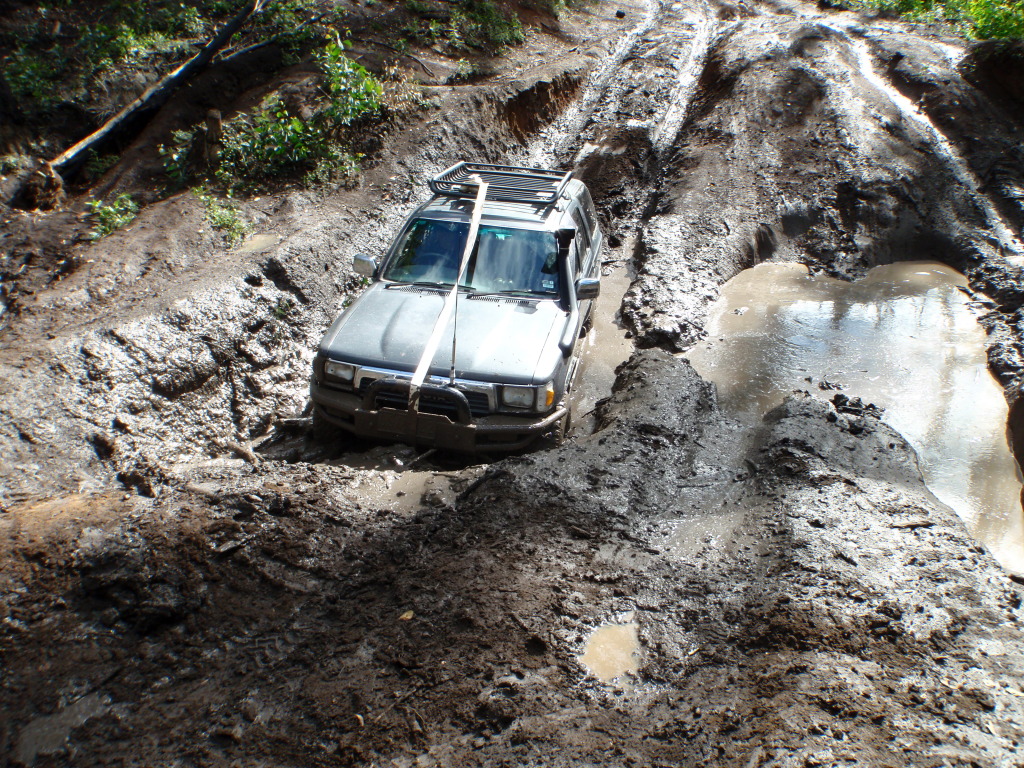 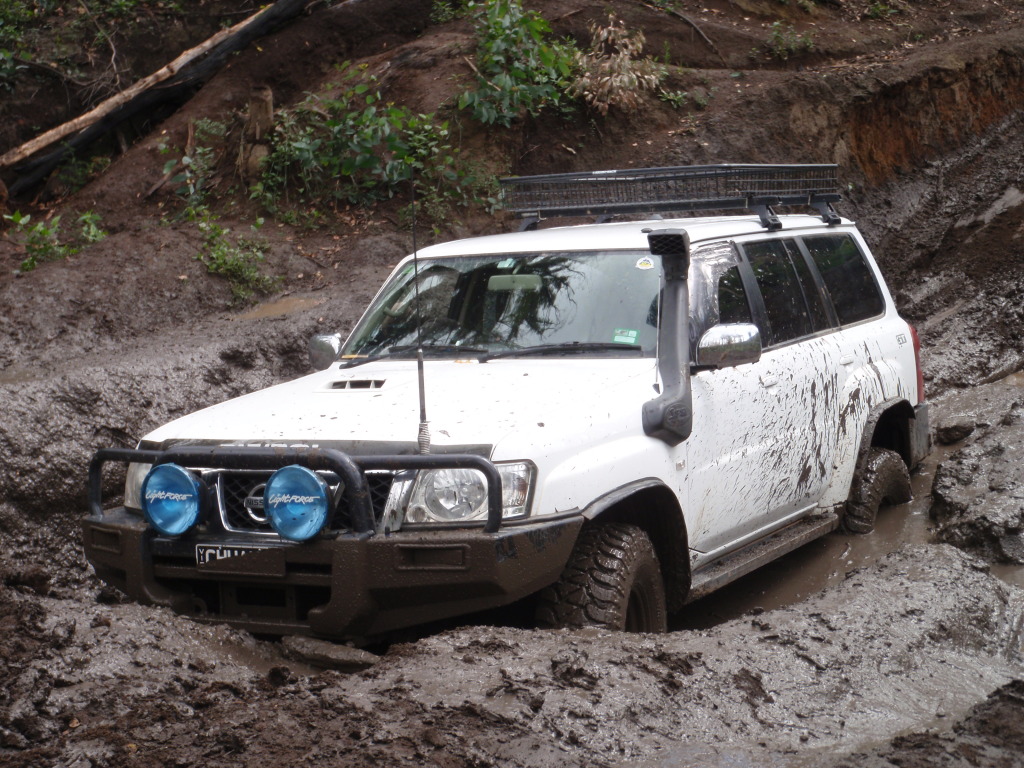 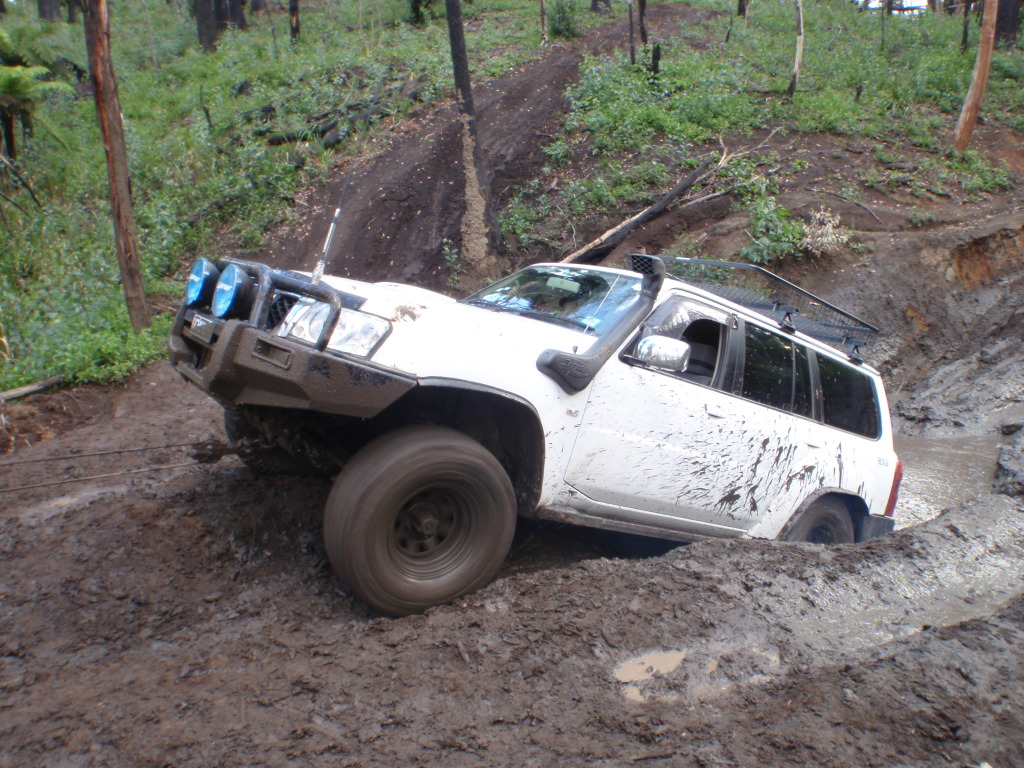 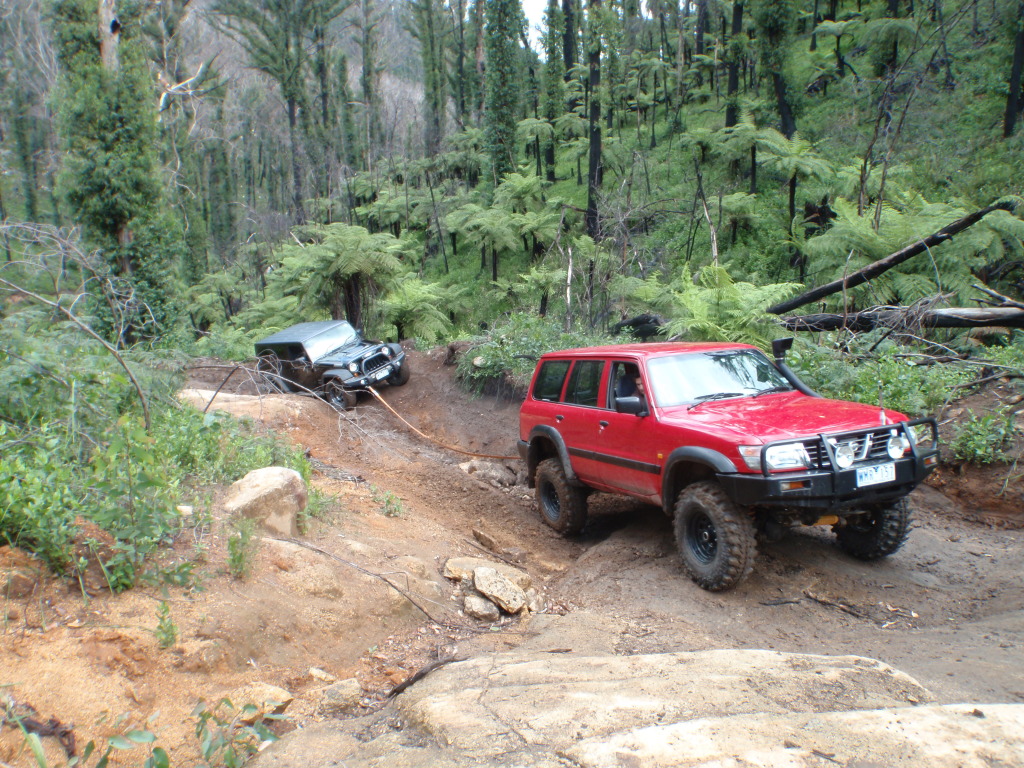 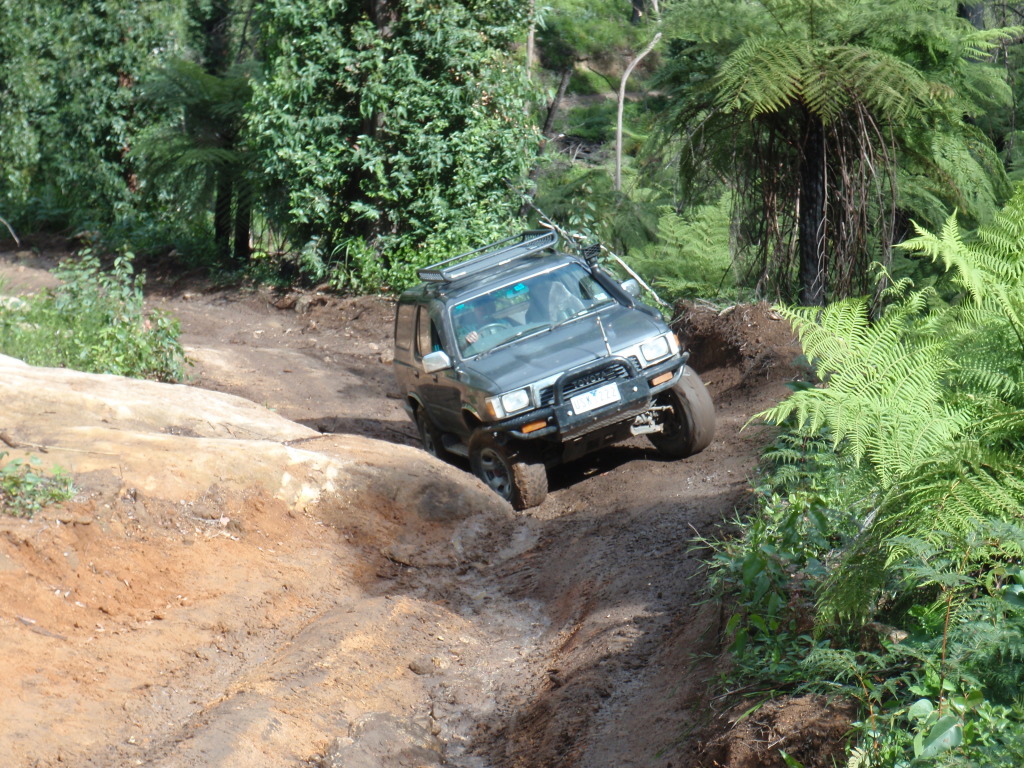 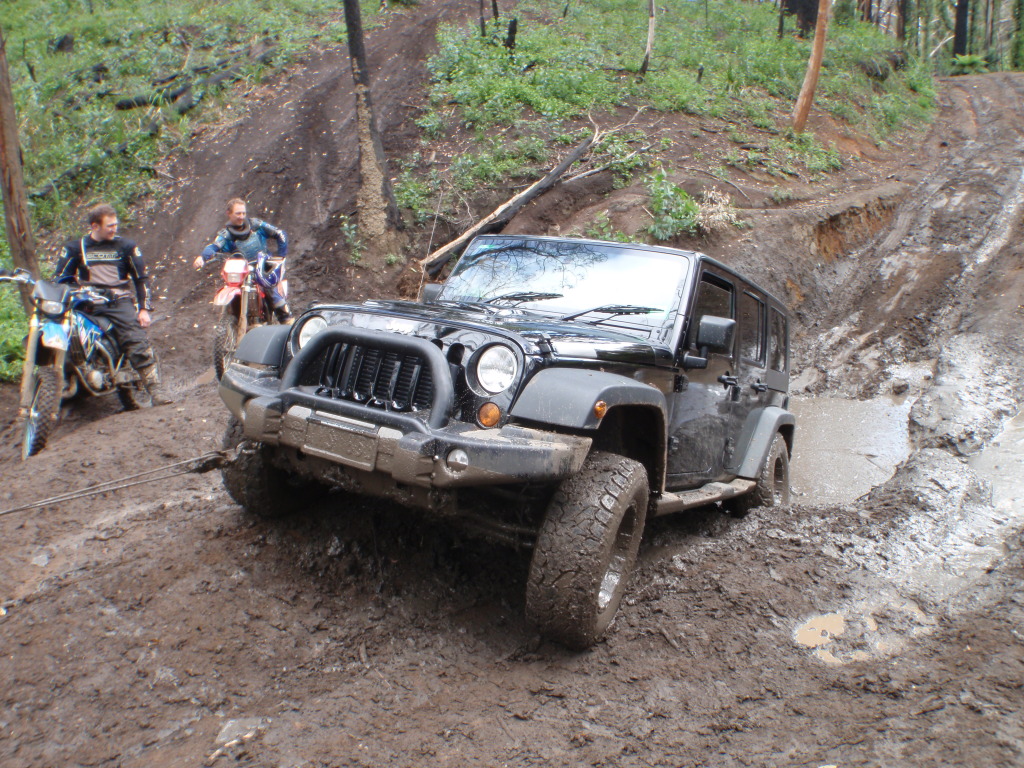 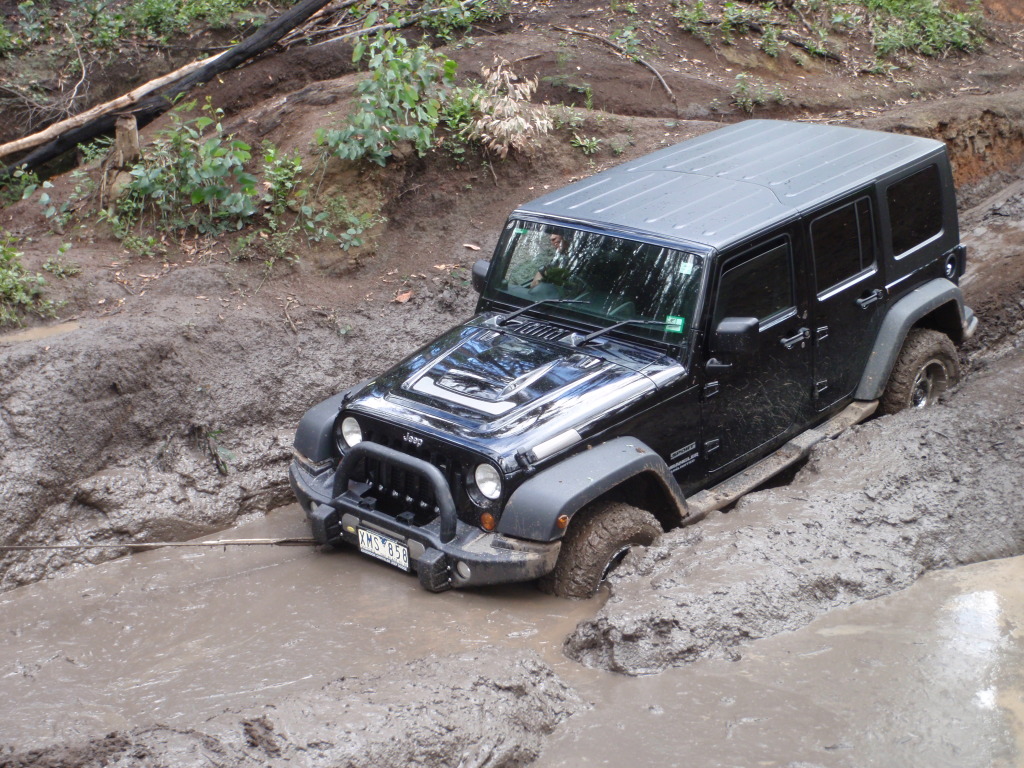 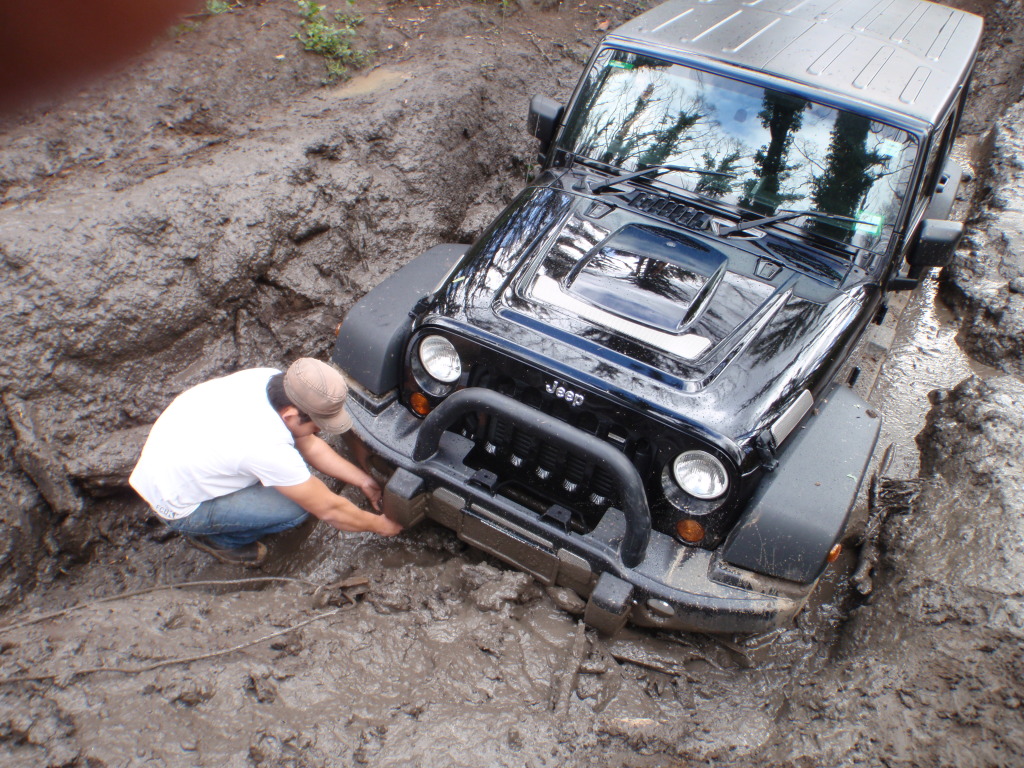 Anyway, we got to the end of Bullock Link Track, got back onto Robertsons Creek Firetrail, headed for Quartz Creek Road and then back onto Forest Road. This is where we met Warragul Towing who took the Jeep away.

It was now pushing 5:00 PM, and in 7.5 hours, we had done a grand total of 33 klms, and this included the bitumen from the BP into the forest.

From there, goodbyes were said and people headed off home, except the Jeep.

The End of the Jeep 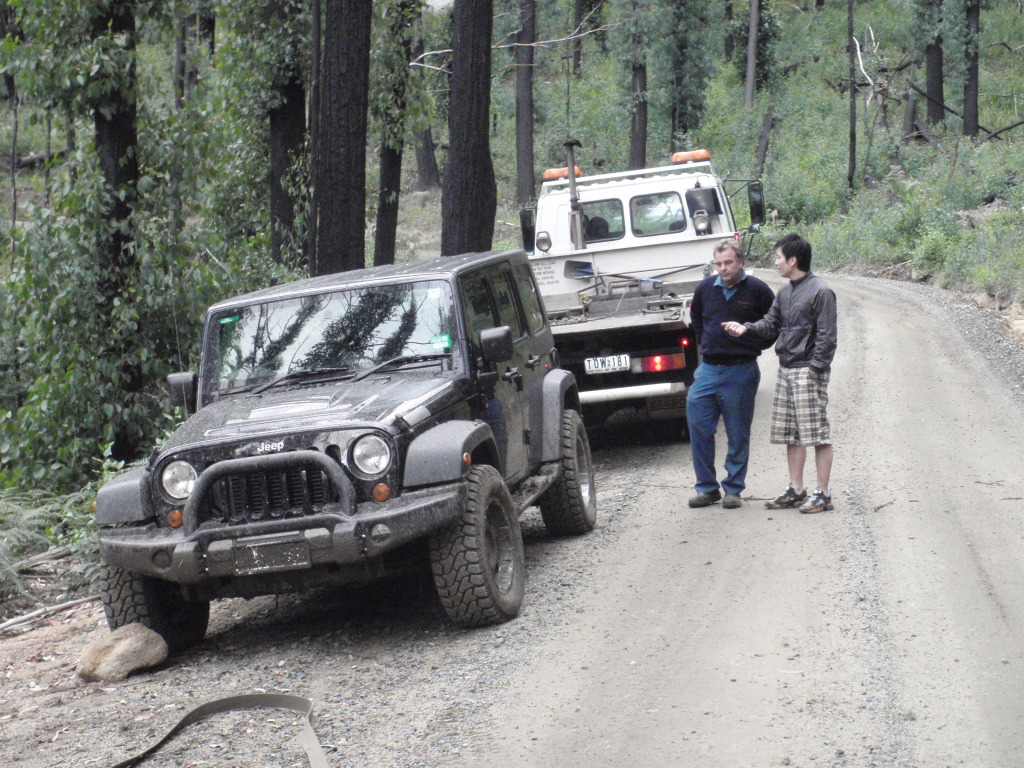 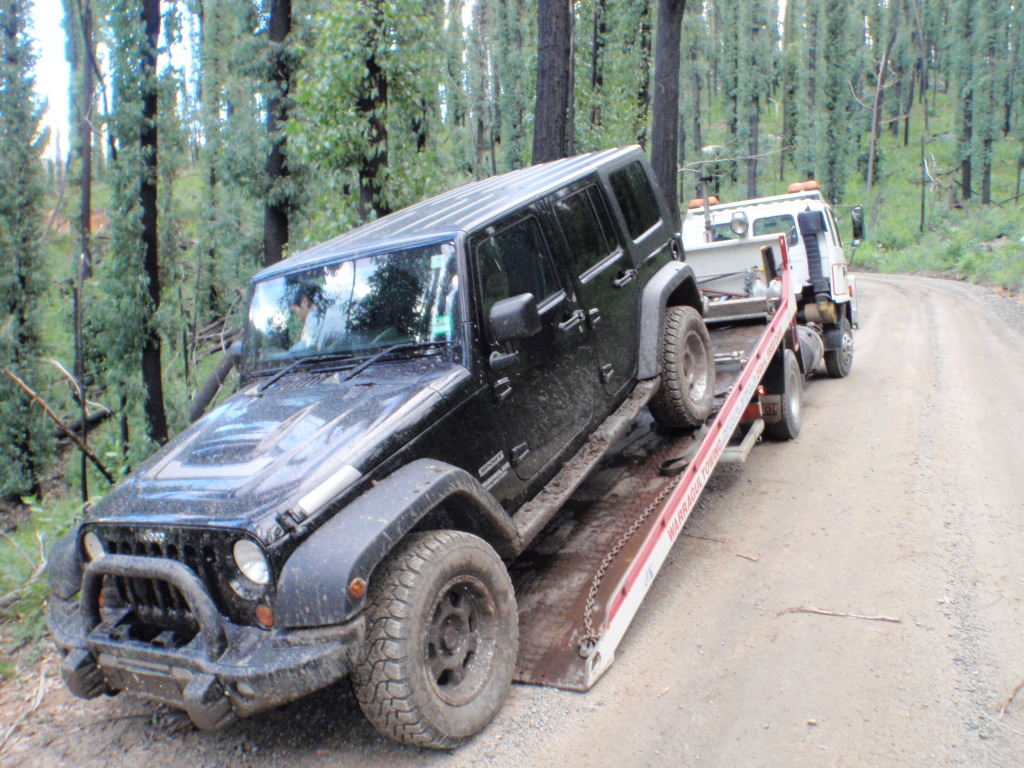 A great day had by all and one we will have to try again.

Thanks to everyone who came along, I really enjoyed it.

Mate great trip report and bloody awsome pics glad you bloke had a good and fun day out. So what did happen to the jeep!!! 10/10 for taking it out there to do what trucks do best!!!!
B

Aaahhhh damn i missed out on another good 1, great report as always dave

Looks like you guys had a hard trip but a fun one.

No exactly sure what happened with the Jeep. Physically it was in neutral and could roll backwards and forwards, but for some reason what we think is some sort of electronic sensor stuffed up and was telling the car that it was actually in drive. When an auto is in drive, or thinks it is in drive, you cannot start it, just turn the key and nothing. Probably an easy fix, but with a 2010 vehicle with all the electronics, could be anything.

Looks like you guys had an interesting day out, I wasn't really serious about having to tow the jeep, Bad ulck Simon, hope it's nothing to expensive.

Here are my photos just to add to the rest....

Thanks Daivd for a great trip! Simon wanted me to say THANK YOU to everyone who help out today with his car.... (He is now Considering a Nissan!!)

Will fill you guys in once Simon has spoken to the Jeep dealership etc...

Kind of glad I could not make it.

we had a good day with the jeep club as well

some tracks where just undrivable after the rain

the rain was very heavy, so was the hail - all in good fun


Simon needs to set up his rig properly - a nice lift snorkel and bigger tyres would be a start - stock Jk's aren't supposed to do bogs like that
Last edited: Apr 11, 2010

All in all was an excelent day dispite having to skull drag the jeep everywhere (even at one stage having three 4wd's connected together to drag the jeep up a hill....PHEW!!)
Everyone deserves a big THANKS. everyone pitched in and helped. Good ideas were plentifull and so was the physical help. Dispite the slow progress at times all were in high spirits.
Cheryl had a great time as well and is thank full for a good day.
Thanks Dave.
I will get some pics and videos up as soon as I can.
Lets do it again...........but please no JEEPS!!!!! LOL

HI Folks, a big thankyou to David for organising sunday and to John for all his winching expertise (bloody awesome). A big team effort, I am not sure which is harder to remove, the mud gunk from my car or the smile from my face.LOL
Cheers Mark

It sound's like a great trip, I want to thank David for rubbing in the trip while I was in hospital, next time I WILL be there no matter what!

missed by that much

A couple of us were trying to make it by 9:30 but I had to pick up another mate which made us late, one of the guys said he saw you all roll out. so we decided to go to Neerum as we wanted to stay clear of the jeep club.

we ended up on a track we haven't done before and proceded to do a 3 hour recovery up a very wet steep hill complete with hail storms and rivers running down the track. I was lucky enough to put on the 35' silverstones and managed to drive the hill (only just with lots of revs and some panel damage). once we reached the top it stoped raining. as always.

hope to make it to the next one as it looks like you had as much fun as we did.

Thanks all, Had a great day can't wait for next time

I'm keen to find out what happened with the Jeep, was it a simple fix or something more technical ?

Davidman said:
I'm keen to find out what happened with the Jeep, was it a simple fix or something more technical ?
Click to expand...

No news yet on the Jeep... was dropped off late morning to Jeep in North Melbourne and before they could start working on the Jeep to find out what is the problem, they had to clean the mud off the Jeep!!!

To date, no news as to what's wrong.... Simon will keep us posted! Hopefully some news (good news) tomorrow?!?!?

I've spent $25 in the car wash and there is still mud dropping off under the car!!! LOVE IT!

About 18 months ago I invested in a 6.5 HP petrol pressure washer. I reckon it has paid for itself twice over so far. Not much fun doing it this evening in the rain though, but it had to be done. Like you Aaron, still more mud on the car than has come off.

Hi Davidman,
Great report. We arrived a little late (around 10:45) I tried to call you guys on channel 27 and figure you all might be at the other end.
I took Tea Tree track (Never been up this way before) come over a slight crest and slide off the track into the bush on the edge of a cliff.
Some lovely people from the Jeep Owner Club came an winched me out. Thanks again guys, Looking forward to the Jamboree!
I will keep an eye out for the next trip down that way, and try and make it on time.

Update on the Jeep.... Dealer respond to problem is... "Still working on it and problem is still unknown"

Will keep you updated...

Simon is almost convinced to trade the Jeep in for a Nissan!


Badnews: Dealer advised that the Transimssion cable has snapped off hence why it would only engage Drive.

Goodnews: Jeep Dealer has paid for everything ie: tow truck, cost to fix the transmission cable and was very helpful!!!