So, my Jimny hasn't been registered yet. It's been for a roadworthy inspection, but the mechanic rang to say he can't do it and the car would have to have to go to the government inspection centre. He said he thought the engine had been replaced for a larger engine. It's a 2010 model which was advertised as 1.3 L and that's the engine size Jimnys had then. He said he thinks it's got a 1.6 L engine. (They never came out with 1.6 in so far as I know.) I asked how he came to that conclusion. Engine number, he said.

Back home and I'm looking for the engine number. Can't find it. The mechanic was grumpy. Probably after wasting his time. Anyway, can anyone describe to me where the engine number is on a 2/2010 Jimny? I just want to see if I can determine if the guy was talking rubbish or not. Presumably, if I can spot the number I can find out what size the engine is.
R

I found it. A couple of pictures, should anyone else be wondering where it is. 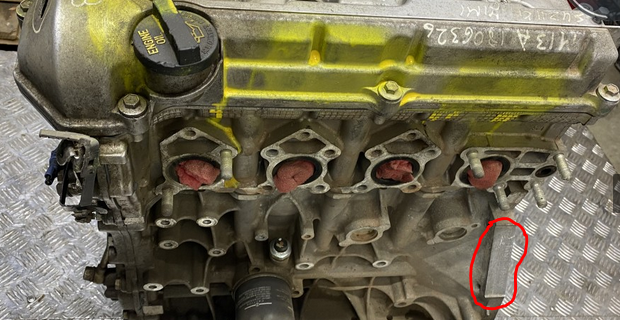 Found this:
I think the Suzuki Swift 1.6L is a moderately common engine conversion for them but I'm sure the previous owner would have let you know (and would've been priced accordingly)
R

I have ENGINE M13A on one of the identification plates with the following on the engine block M16A-1403182. It would seem clear. There's been an engine change.

I'm surprised the Swift engine would fit the bell housing, spigot and splines from the gearbox.
D

Very surprised the seller didn't let you know - was it a private sale or through a dealer? If you weren't aware then I assume it hasn't been mod plated so you'll need that before rego/road worthy and also need to let your insurer know.
R

Private. The seller seemed remarkably honest. He gave me a copy of the Victorian roadworthy certificate he got when the rego was transferred. That certificate shows the (1.6 L) engine number. I wonder if the guy doing the roadworthy back then didn't notice or didn't care.

What do you mean "mod plated"?
D

I don't want to lead you down the garden path as I'm only familiar with QLD laws, but up here engine conversions require assesment by an engineer and Modification Plate (a physical plate similar to your compliance plate, generally on or around the firewall). I would assume it's the same for all states in Australia but someone more local to you would know better one way or another. The fact it was registered in Vic with the engine conversion is a good sign though.

Hopefully someone who knows more about this can chime in.
R

Ironically, when I was looking for a car I had spotted two others in Victoria that interested me. I had decided that if the one in Melbourne didn't pan out for some reason I'd keep driving around the coast. There were two others at Warragul. One of them had had a larger engine put in. That put me off. A nice idea, but I was concerned about registration issues. (You know, like I have now.) I voiced my concern to the guy and he put the case that it wasn't any real problem. Once approved and registered with the new engine number, he said, everything will be good to transfer ownership/registration. Perhaps that's the case in Victoria. Crossing state borders introduces another level of confusion.
K

Was the mechanic happy with the state of the car other than the engine number? There are ways around that sort of thing but I wouldn’t be thinking about anything like that unless you know the is otherwise roadworthy
R

Krumpy said:
Was the mechanic happy with the state of the car
Click to expand...

He didn't say. The implication was that he spotted the number and stopped what he was doing. I don't know how far he got with it. I was tempted to just go to some other garage in the hope the next guy wouldn't be so thorough. Anyway, it's booked in for an inspection with the govt tester. Who knows. Maybe they'll be the ones that miss it.

My reluctance to go to another garage was that I don't actually know what these people do when they do a roadworthy inspection. For all I know (and I know this sounds paranoid) but they might well log the rego number or VIN number in some govt database, and if the car front's up more than once before being passed alarms bells might sound on their computer or something.
R

Assuming the inspection pans out okay. They might say, it's been done well, no problems, all good. (And they don't actually tell me to replace the engine.) It would be useful to know what engine I've got in there. It could come in handy for ordering spare parts, or if I take it to a repairer for work it would be good to be able to tell them so the know what specs to look up. So, does anyone know how to identify what vehicle an engine used to belong to (and maybe the year of manufacture) from the engine number, short of contacting Suzuki that is? Deadweight suggested the Suzuki Swift engine was sometimes used in Jimnys.

The web notes the M16A is used in following: