..
Still have the Ranger, and no plans to get rid of it, and while I feel a bit, I dunno, unfaithful to it, I just picked up a great little project vehicle to keep me out of trouble.

Mate Gunthers old Pajero, model etc as per thread title.
It's a sad story of my old mate, see Vale Mr Pajeroo
Gunther owned this vehicle for about 24 years, so a part of him is in it for sure.

Some facts about the vehicle :

3.0lt fuel injected V6 petrol
105kW (141 hp) and 228nm
5 speed manual
Three-link coil rear live axle, front IFS, think it's torsions, gotta get under there sometime for a look
They had the first LSD's in the models, supposed to be a very good tight one too.

2nd last of the gen 1 Pajeros (last one the NG was a facelift on trim only), with chrome wheels, suspension seats for driver and front pax, and it has what the referred to as the high end model, with an inclinometer, volt meter, oil pressure gauge, stereo cassette player (upgraded by mate during his time), remote fuel filler release, suspension driver's seat, carpeting, tweed and velour cloth trim.

I think there's even some cup holders in it somewhere !!

So, I have some ideas for it.
There is basically no rust, very few dents (hey, I'm a dent man anyway !), and I plan to give the old bus some different paint, kinda make it a totally original vehicle.

We'll see how mechs go, but I'm not adverse if keeping it a few years to a decent fitout for short touring / beach work, and maybe a V8 if the V6 spits the dummy ever.
The gen 1's had full solid ladder chassis, nice and strong too. 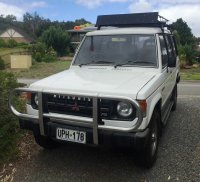 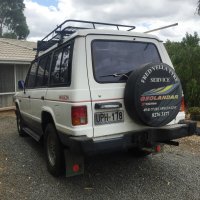 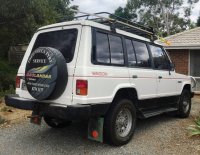 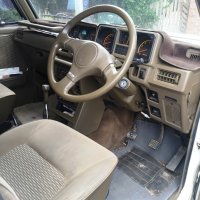 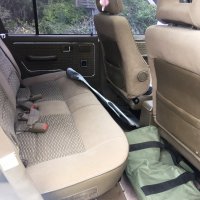 Basically as picked up today, probably some dust from trips, loads of crap all through it and all
It was unregoed for some time, just had to go in yesterday and do a form, rerego in new name, very simple.

Started first go, looks like the old bus has plenty of life and very reliable.
Well, I know it's pretty good as it came across the Simmo with us west - east back in April 2014.

Will do updates as things move along.

One of the first jobs will be get the original purply looking old film off the 13 (!!) panes of glass it is applied to, gawd . . .
Quarter windows will be interesting to have again

Ah Yep!. Good to keep and do up, not only because it looks good for its age. I guess Gunther rides with you..

Thats a great score, and knowing Gunther will be riding alongside on trips you better look after it.

My nieghbour had one a few yrs ago and they travelled extensivly in it with great reliability.

Cheers fellas, I am wrapped with it, drives VERY nicely I tell you, and comfort !!
The rear coils compared to ute with tub and leafs
Not to mention the seats making the ride even smoother

Would you believe I've never driven it in 20 years of knowing Gunner ?
Today picking it up was it, not even a test start or run (was unregoed anyway).
Mostly never drove it before because I'd be in the Ranger when we were out on trips.

Yep, I'll take care of it, or I might hear Gunther berating me from the pax seat in his rough old German accent !!
He never lost that in the 50 odd years he's lived here.
Gunner was a brewer here at West End most of his working life, and before that he worked a lot in WA laying rail lines to mining regions, working tough out there.

I have read a lot of the Vic Paj 4x4 Club forum of late, these old rigs do have a great rep for reliable capable off road performance, so looking forward to getting it on a track and working the smaller gearstick on the floor !!!
Maybe Goolwa Beach is on the cards for an arvo run to the mouth, and have a dusk bbq ?
M

i miss the old quarter windows of my old d21- do any cars have them anymore ?

Haven't seen them in a looooonng time.
They must have been a pita for manufacturers, but my guess is square(r) windows were easier to design for the mechanisms early on, so the little triangle bits needed an excuse for the luxury wind directing 1/4 glass to fill them in

Good car! He though old but apparently in a good shape.

Yes, and it is much fun to drive Mamikon.
Looking at it, it might just be a 90% condition vehicle which is pretty remarkable.
I know my mate didn't use it as a 4WD until I got my Ranger in mid 2011, and he kept it under cover almost all the time.
Not sure about the vehicles first 4 years of life, someone fitted the roof rack probably for trips, I expect it was the original owner.

If I had money, I probably would buy myself the whole collection of SUVs. Pajero is very interesting to me too.

Very straight Pajero for its age

It amazed me on the simo crossing, very capable in the sand.

maddon said:
i miss the old quarter windows of my old d21- do any cars have them anymore ?
Click to expand...

70 series still have them in the workmates with manual windows but that would be about it i reckon?

mac_man_luke said:
70 series still have them in the workmates with manual windows but that would be about it i reckon?
Click to expand...

I love the quarters on the 60, on the highway it directs heaps of fresh air (and sometimes bugs) I actually spaced the snorkel 20mm off the pillar to get better airflow.
Love that pajero Les they are a great 4×4 .
My mate with the new paj still talks about his old one the same as yours, still says it's the best pajero he's had, pretty rare to find in that condition, gee a little ford 302 windsor would fit nicely in the engine bay wouldn't it, love the sound of those little v8s.
Wonder how much work that would be to adapt

Cheers fellas, I'm spending the next 5 - 6 hours on it.
Looking over it it is certainly in VERY stock and original cond, and a good thing Gunther kept it undercover, and prettty much no use as a 4WD for his ownership over the first part of his 24 year ownership.
No rust whatsoever.
Coupla little patches of spray pack paint on it in 2 places, I painted the bonnet for him a couple of years ago as it had deteriorated for some reason.

1. Empty all the crap out of it, blow it out, clean interior up a bit.
2. Remove roof rack for preliminary work.
3. Polish and wash it, so I can both see body dents needing fixing properly, and to assess if I really want to do a special paint job, or leave it std . . . leaning towards leaving stock condition a little more now, as it will really be nice to leave it as is in some ways / more appealing in generally to particular vehicle model fanatics as original.
4. Time permitting, have a crack at the film, an interesting project as I haven't removed it before.

Brother advises the way the crash trade and tint places remove old film is . . .
Wet inside film with water via spray bottle
Apply newspaper and wet down with spray again
Another layer of newspaper, repeat . . .
Up to 5 or so layers, keep it moist now and then over 15 - 30 mins, checking periodically for results
Film should peel off easy as apparently

Will take pics and advise of the film process success.

you talking about tint? steamer is a good way of removing it, e.g. wall paper steamer.

Heat gun can work but is risky on glass as you can crack it with uneven heat.

Yeah mate, that should work because it's water / steam.
Will try the newspaper trick, sounds like the crash / tint industry use this as a standard procedure.

haha yea i guess you might know a bit about glass

Great couple of days, managed to spend about a day all up on the Paj between different jobs (ie work ).

Ok so removed wipers, rear number plate, door mirrors, spare wheel and rear door carrier bracket . . . all the interior cleaned up, vac, and blown out . . . cut & polish (2 x as I went to get it looking as good as it is) . . . big hot, strong detergent wash . . . that was yesterday, finished right on dark, in fact, I sprayed the rear wheel carrier bracket in the dark on the street so it'd be nice and dry today for fitting.

Today, I brush touched chips around it, very minor, not a bit of rust anywhere on it apart from surface rust on a few of the chips, which were polished up and then sealed with the paint daubs.
Removed wiper blades from arms and painted 3 wiper arms, fitted new deep dish mats in the cabin, painted and refitted door mirrors, also fitted convex viewing mirrors because these mirrors are tiny !!

Still not finished, have to refit new wiper blades to arms and onto vehicle, got to tackle that film sometime (not too fussed when), blacken under the wheel arches and around the general body, remove petrol tank guard and refit (they get little stones going on them and these jam in and sometimes hole these tanks), repair dent in rear bar and paint black, blacken bull bar matt black, give it another detail wash and round with the brush again, remove other front underbody panels and check front end bolts (they are notorious for a few particular bolts coming loose).
Under the bonnet is all original and leaving it as is.
The interior carpet and upholstery is bloody near perfect !!

But it's looking pretty much smarter right now, in fact, I've changed my whole plan because this could well be one of the cleanest, most original gen 1 Pajeros in the country . . . too good to change from original.

The original thought was to respray inside and out in matt Army desert sand colour, all colour coded bars / roof rack etc in a darker sand colour to contrast a little.
I just don't think I can bring myself to do it . . . what do you think ??????? 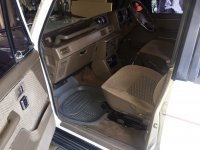 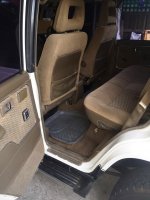 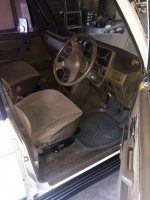 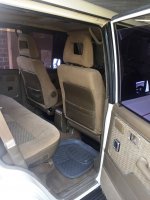 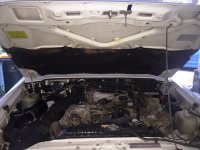 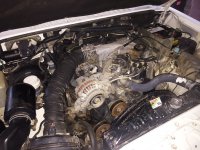 Gee that sure is tidy Les, yep id keep it original, been a long time since I've seen one that shiny, can I buy it ? haha
Only joking Les I know she ain't for sale, anyway the Pajero is probably worth almost as much as Rogers $120, 000 classic troopy, I liked that one but a bit out of my price range
Last edited: Mar 22, 2016