The June long weekend here in the 'Big' state has come and gone with barely a whimper, I say this only because the last three days away from all things along the lines of media have been incredibly relaxing, no political bullsh1t, religious or mongrel social misfit ~ breaking news ~ to spoil a second of thought time for me.

The wife and I have only just returned to our home base here in the Pilbara after being away for about three weeks, this particular trip was also rewarding to a huge degree though not truly relaxing, caravan towing can be frustrating simply because there's that extra element of vehicle and caravan tackling not only highway traffic but city and suburb loonies, anyway we got back to the Pilbara totally unscathed even after logging close to 4000 Kilometres. It was time to get out and about and simply relax.

We decided on a solo vehicle adventure, no camper trailer, just the Cruiser and the gear we needed to be relatively comfortable and safe for a few days, it does take some consideration when packing two swags, camp stretchers, comfortable folding chairs and the like for two people along with all the associated stuff one might need when 'adventuring' in what is still a very remote part of Western Australia.

My prime aim on these journeys is not to become a statistic, in saying this I mean, no outside assistance or knowledge of our having been to whatever place or point we plan to visit or stay at, this may sound egotistical but we are confident in our gear and ourselves and comfortable when wandering about in our home paddock.

This trip was relatively short distance wise as the Cruiser logged a mere 203 Kilometres, we saw/heard only one vehicle and that vehicle was travelling at speed on a fairly ordinary track, this is quite typical for someone working to a time table ~ the vehicle was a mine spec'd Land Cruiser with an exploration drilling companies logo on the door, these interlopers are becoming more prevalent again throughout the region.

Our first night out had us making camp just on dusk, it's a beautiful time of the day/night, we set up camp in the bed of a major watercourse near a large tree that had collected more than enough debris and good fire wood to allow us to have a reasonable fire for the night, there are pros and cons when it comes to camping in a creek bed or watercourse, but there is little chance of flash flooding out of the tropical wet season, but it does rain at times, just not as intensely.

We star gazed for what seemed like hours, we talked about our grand sons, our two sons and about the people who are near and dear to us, not too sure why these conversations come up when your alone with the one you love, but they do. Sleep came eventually.

It was a cold night with a bright moon and no cloud cover, so our swags had a light coating of frost over them and I was not too keen on leaving my very comfortable and warm cocoon, but I did and it didn't take much to get the fire roaring again, breakfast on the go, jaffles done on the coals and coffee just to get things going. We were fully packed and ready to leave our nights camp, when the 'speedy driver' crossed the watercourse some two hundred metres east of us, he/she would not have seen us because of the creek bed vegetation and the rising sun.

The Hickman Meteorite impact crater was our objective for today, this magnificent 'almost perfect' Astro geological feature was discovered fairly recently when Dr Arthur Hickman noticed an unusual shape in the landscape while using 'Google Earth' as a tool for his geological studies at the time in 2007, the rest as they say is history, non the less if You ever travel to the inland Pilbara, make an effort to visit and experience this magnificent place. We spent a few hours in the crater region, finding a very deep natural hole in the ground on a cliff top overlooking a substantial watercourse, if a person was to stumble into this 'hole in the ground' they would become part of the Pilbara.

We had 'smoko' at this nifty place before heading out of the crater site, the track is now very well defined but care should be taken as it is rough and rocky in several sections, the views are simply magnificent and there are several clearly marked Pebble Mouse mounds not too far off the track sides.

A known petroglyph site was our intended destination once having left the Meteorite Crater, these petroglyph's are mistakenly called 'art sites' I might be a stubborn old bugger, but the ancient people of the land carved messages or information as they saw it at the time, to guide and inform their fellow people as to what lay ahead, where the water was and possibly what prey might be in the area, this to me is information and not art as such.

Punda, as the site is officially called is truly an eye opening and if you allow it a very humbling place to visit, geology wise the rock and earth is around 350 million years in being, the petroglyph's are actually impossible to accurately date, but science has proven that mankind was active in the region some + 26,000 years earlier.

We have been travelling throughout Pilbara and visiting this petroglyph site for close to 30 years now and we still manage to find totally new to us, rock carvings, in and amongst these boulders, Punda is truly a unique and very special place, it is genuinely remote yet not, as the modern day explorers are already within close proximity, their mineral exploration drill sites are edging closer, not only to Punda but also to the Hickman Crater, I don't know what the future holds for places of antiquity, but going by what has already been deconstructed in the push for resources it does not look too promising at all.

Our day was nearing an end so we struck out for another major watercourse to the west of our location, Coondiner creek is another very significant watercourse, it's not only a feeder creek into the vast reaches of the Fotrescue Marsh, it is utterly spectacular for it's deep cliff lined and boulder strewn length right back into the Eagle Rock Falls and pools area, this is another major creek system that generates it's beginning high in the craggy escarpments of Mount Newman. We set up our camp on a large shale bank near another natural wood pile, another magnificent wild bush camp in the Pilbara.

The journey back to Newman, our home town was somewhat of an anti climax, grey skies, heavy rain bearing cloud and an icy wind whipping up dust along a pulverized fence line track to the main rail corridor and access road back to our home base ~ Newman.

I used the word pulverized for the condition of the track surface, there are drilling contractors accessing the grazing country bordering Coondiner Creek, there are Rio Tinto shingles hanging in many trees along the length of this once very lonely remote track, we had to pull up along the BHP rail access track while an ore train went by, not specifically to watch the train, but just to keep out of the heavy iron ore dust and grit coming off the entire 250 wagon length of the train, I don't mind admitting these ore trains are a spectacular yet sinister sight, that makes the Pilbara a rather special place to explore. 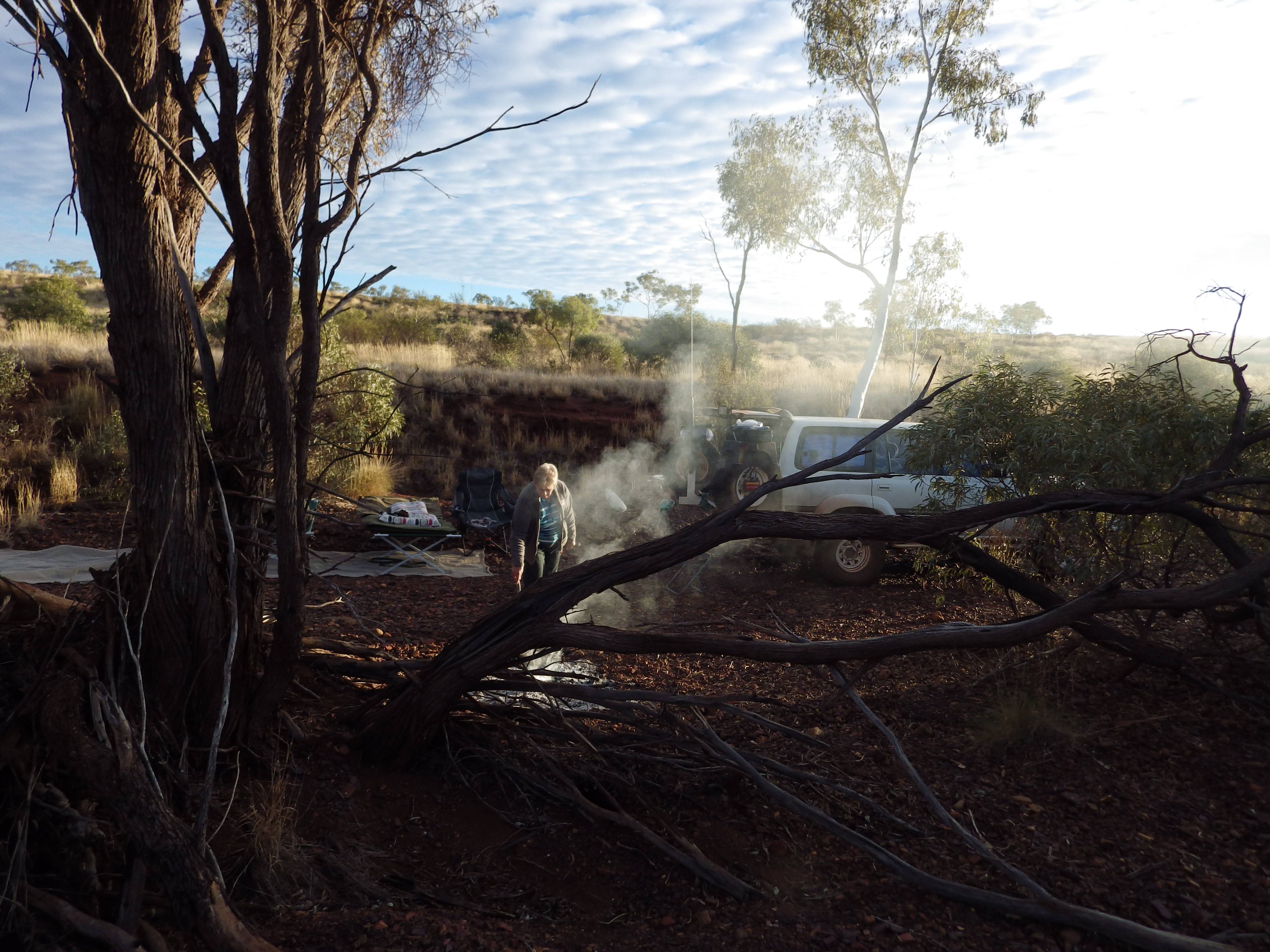 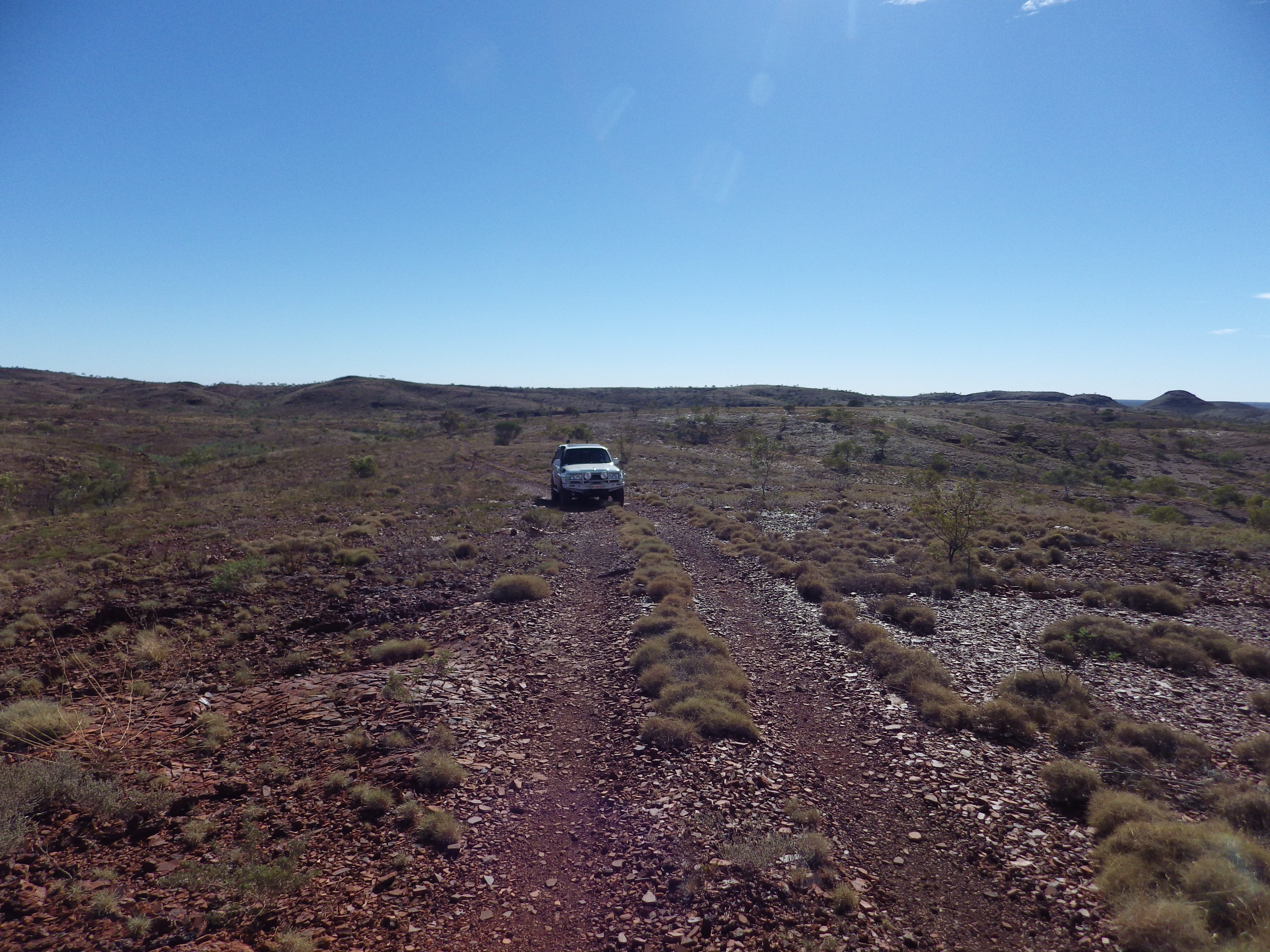 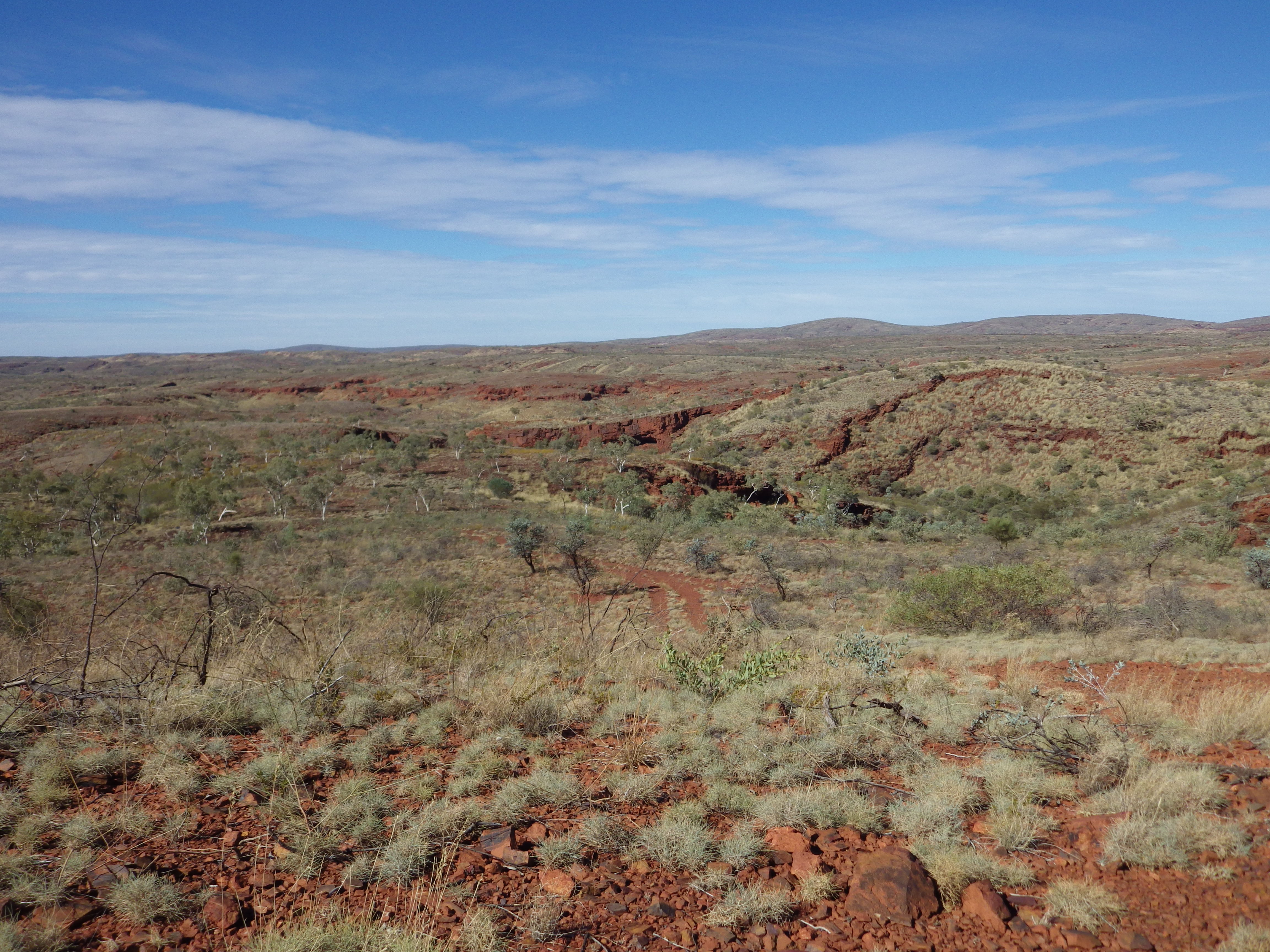 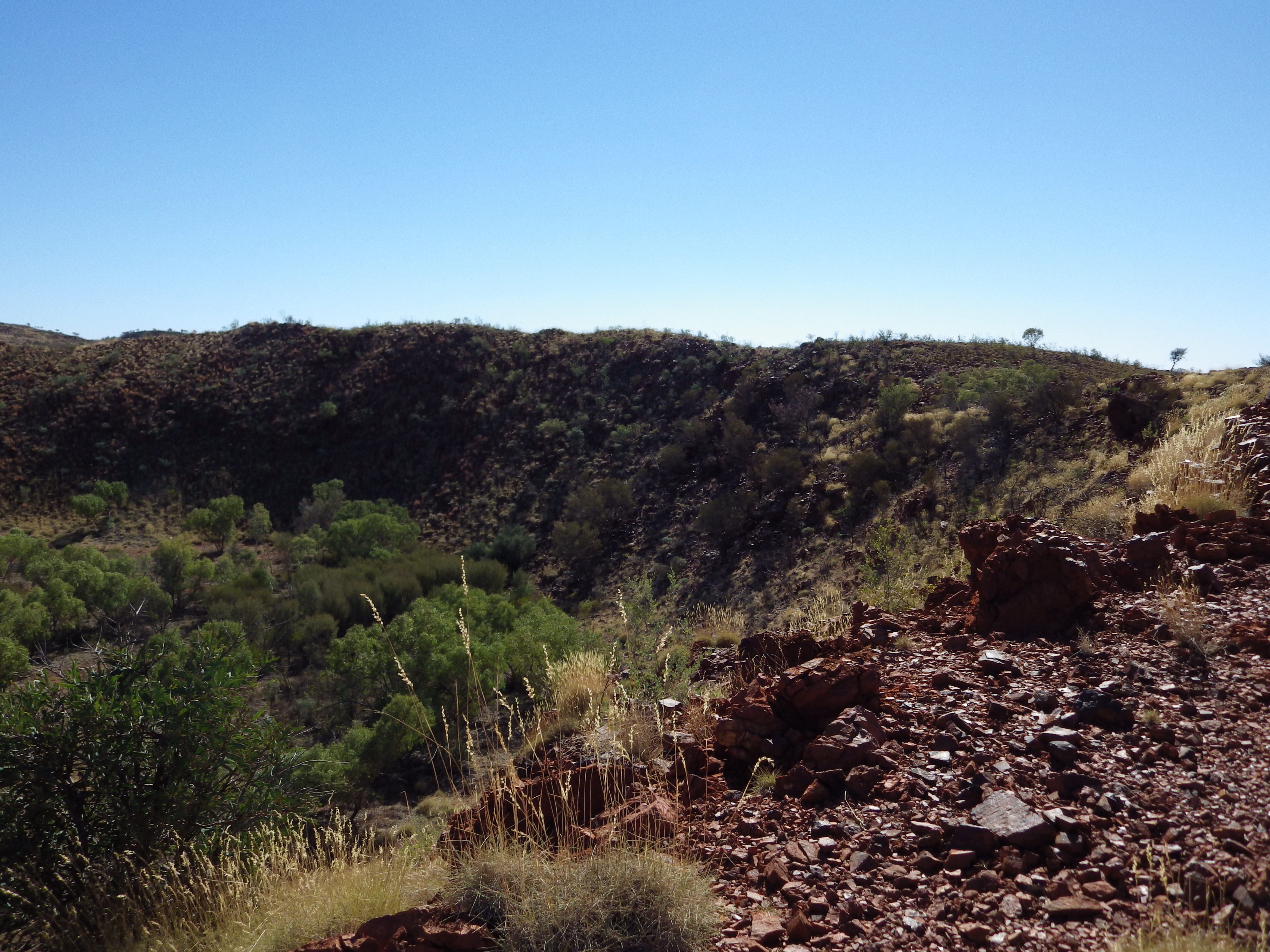 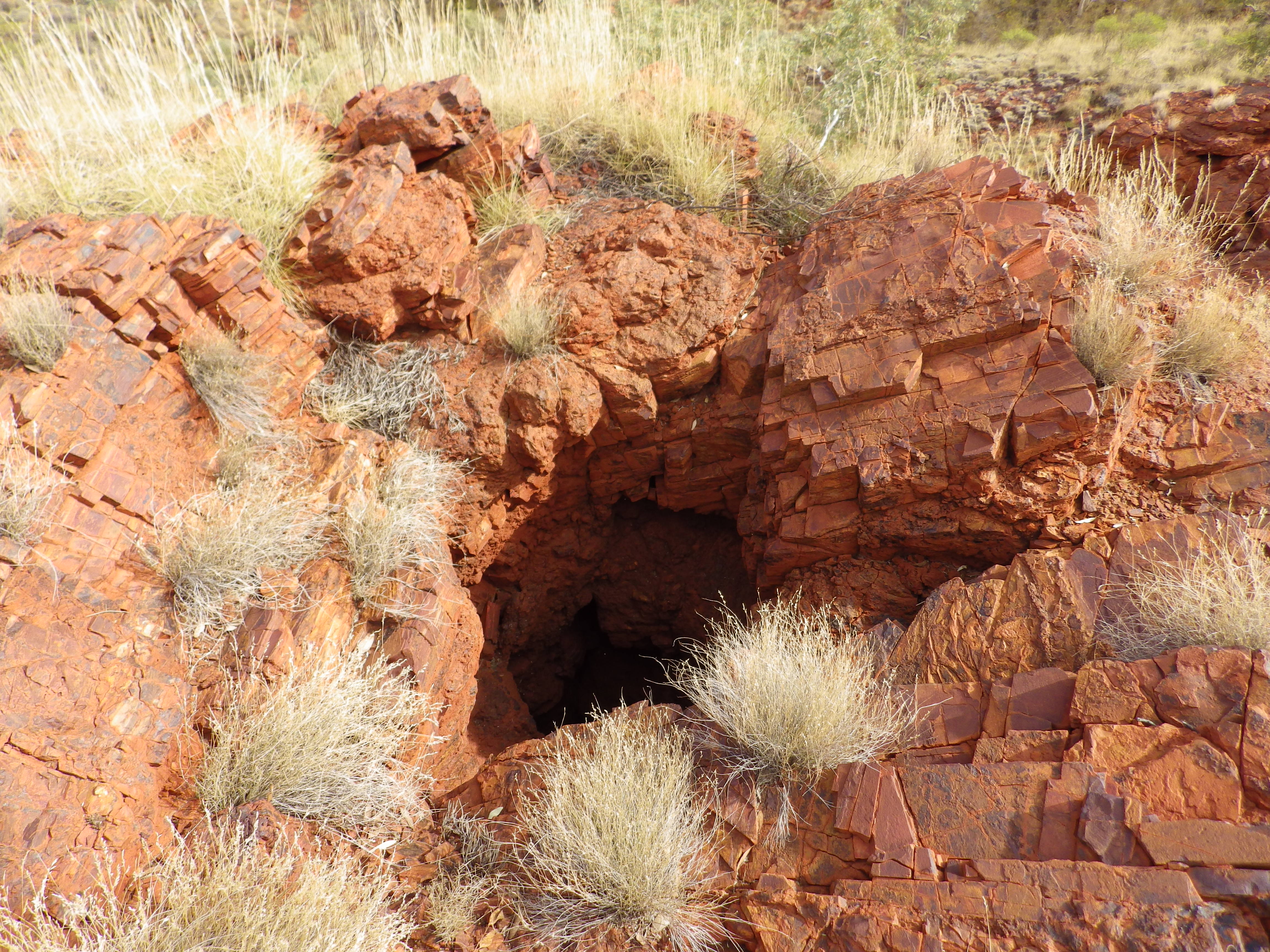 Hole in the ground. 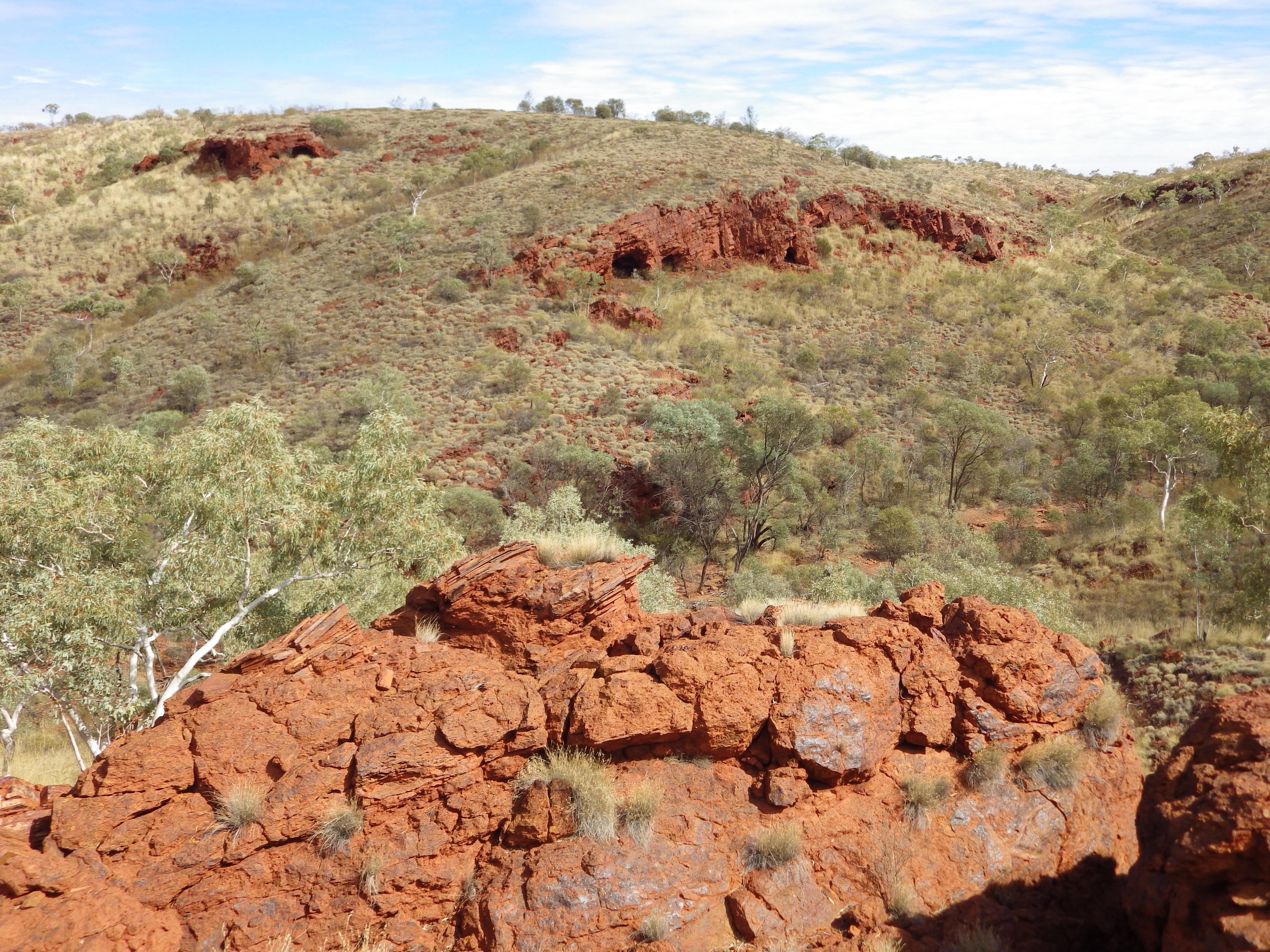 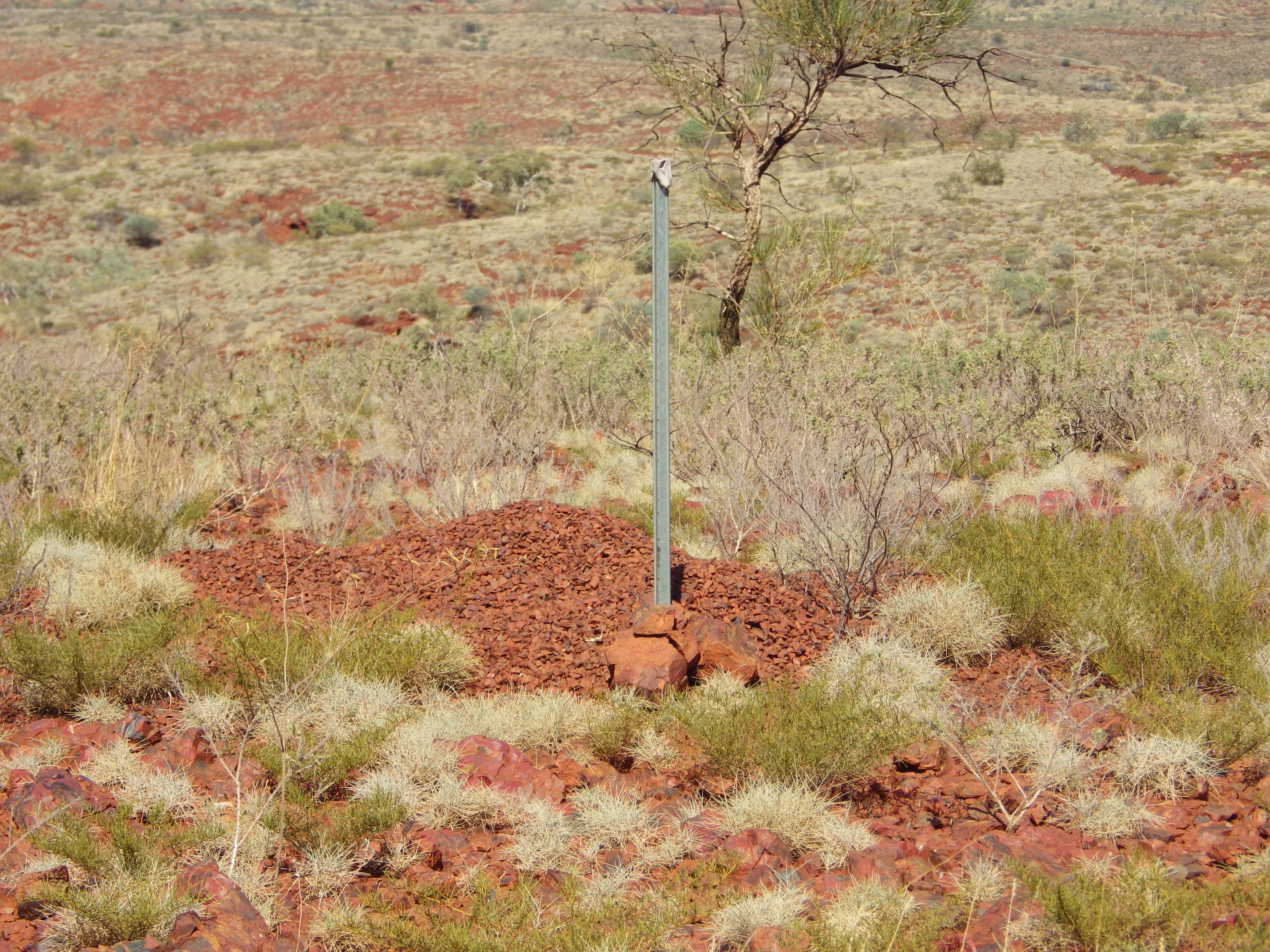 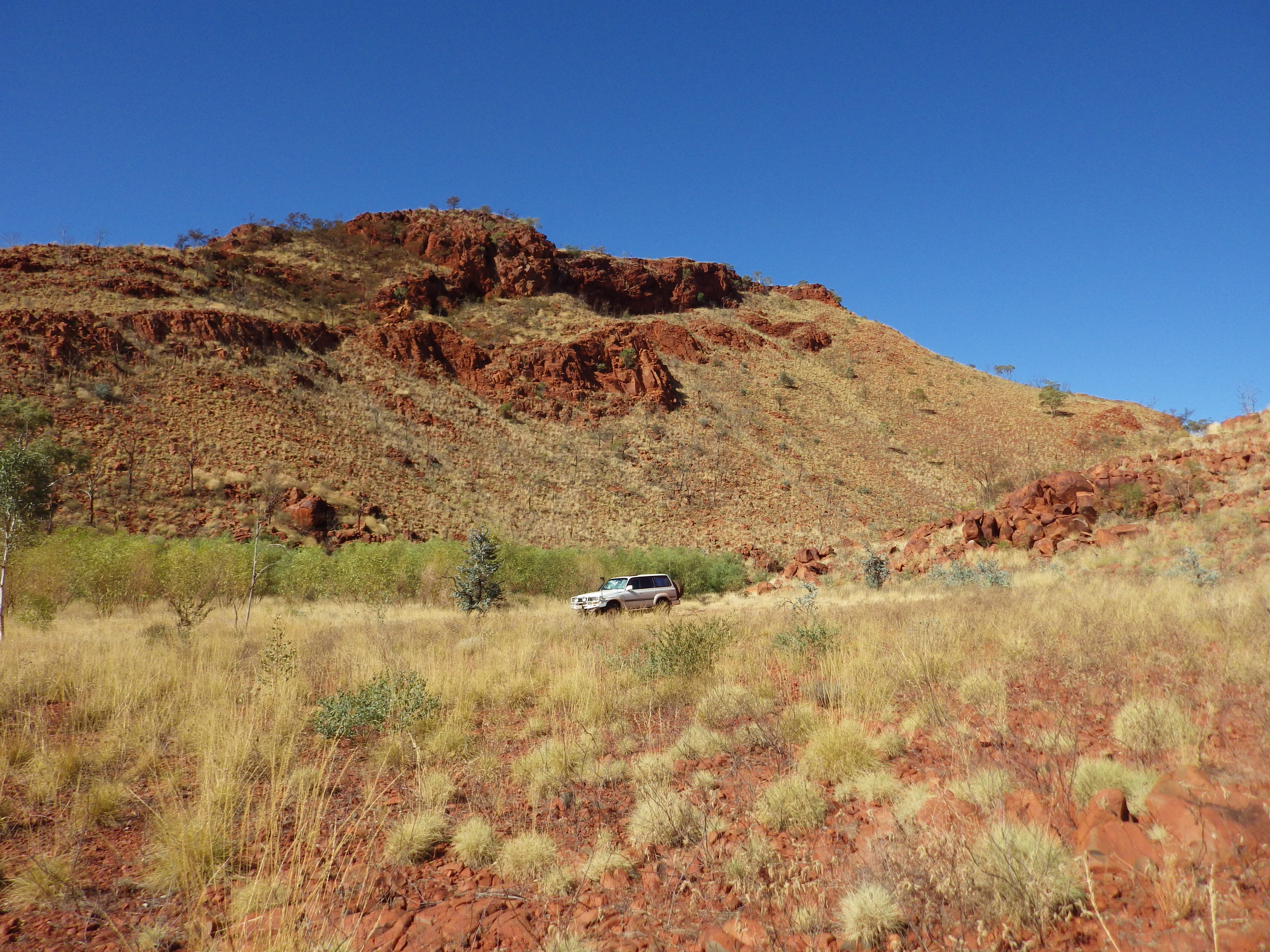 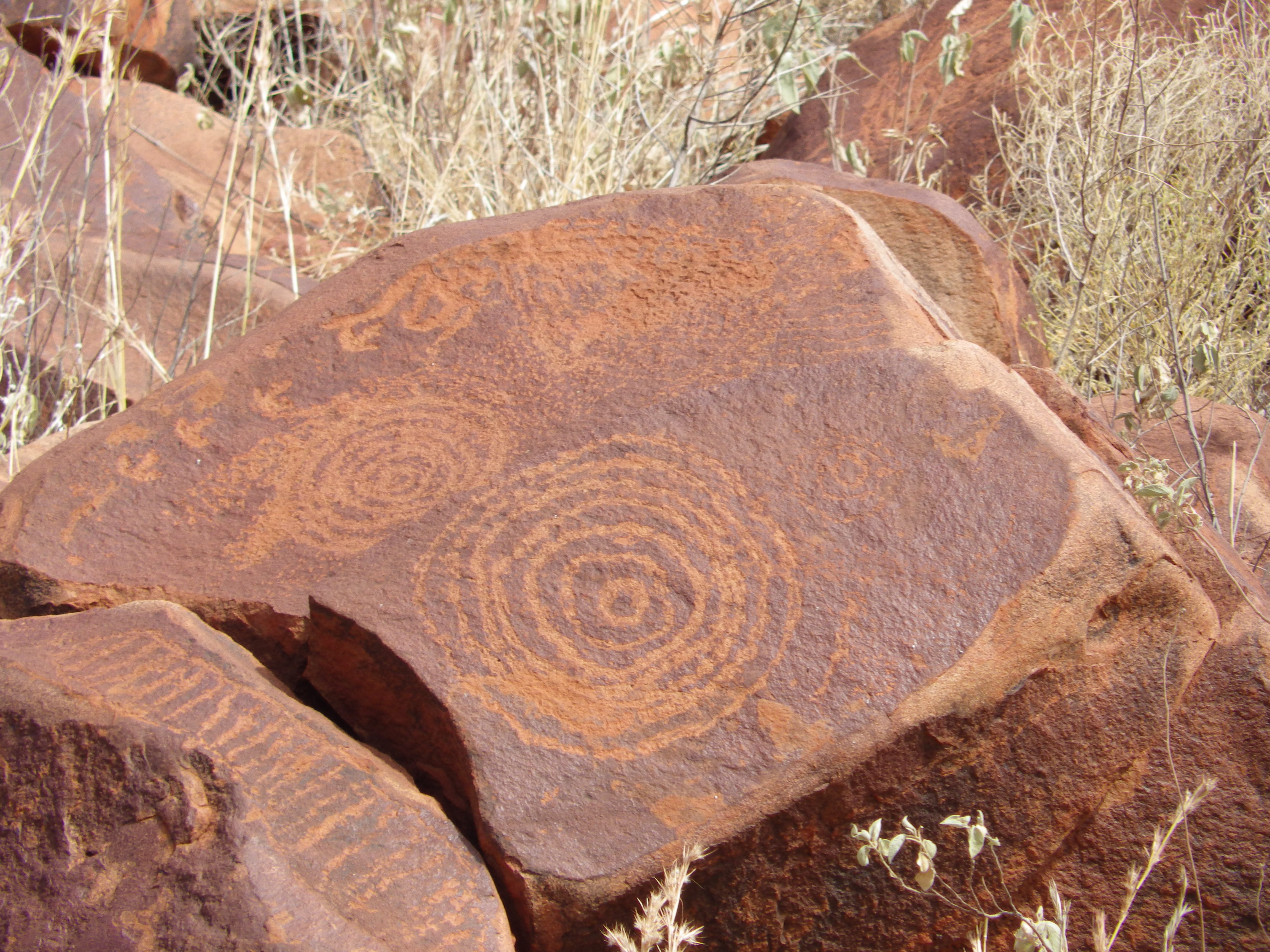 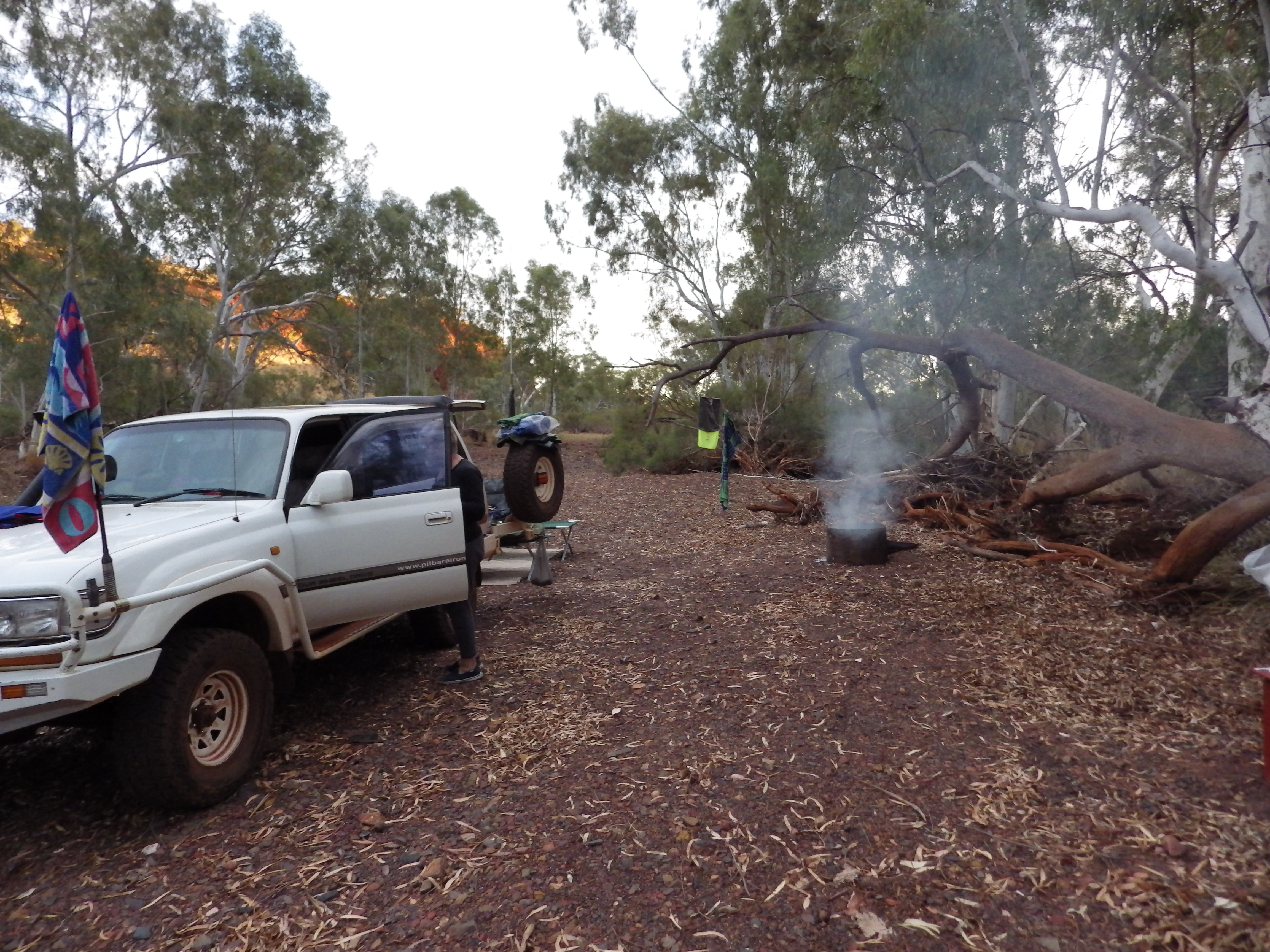 great write up, thanks for sharing.
T

Great report and photos. Thanks for sharing.
We leave for the Canning in 5 weeks. Looking forward to our first visit to WA.
Tink

Great write up as always Joe - I really must make another trip out to the east Pilbara sometime, its been way to long since I've been to some of the areas around Newman/Marble Bar/Nullagine

Awesome write up Joe. Love your technical/historical additions to the piece too.

I am so overdue a mid West and Pilbara journey. Seeing stuff like the above doesn't help, but cheers anyway .

BTW, that Petroglyph shown is the symbol for water (I'm sure you know that). Showing fellow indigenous passing that way where to find it. You are correct, it's not art at all, it's survival. Out there without water, survival is nigh on impossible. Most enjoyable read Joe. Its easy to see the passion in your words written and i hope oneday to experience some if that area before its lost to man's endeavor's.

80lover96gxl said:
Most enjoyable read Joe. Its easy to see the passion in your words written and i hope oneday to experience some if that area before its lost to man's endeavor's.

G'day Brian
Thanks for the response, the Pilbara and more so the inland region of the Pilbara has had massive changes bought on it over the past 30 years that I've called it home.
I won't go into finger pointing simply because I'll get a fair kicking (again) but the the deconstruction of the landscape in many places is going ahead at an alarming rate and much has already gone under the blade of the Bulldozer ~ some see this as progress but I for one do not see it as progress.

There are still many magnificent scenes and secret places to enjoy and in all honesty you can easily get lost as the saying goes and not see another human being for several days or weeks, if you camp or stay someplace in a 'low profile' way. These experiences can be quite profound, especially when a wild animal chooses to stop by your camp and look at you, wild dogs/Dingo's and Lizards are very curious critters.

Had the absolute privilege a few years ago in seeing a group of rock Wallabies do their thing up a near vertical cliff face, very sadly the cliff face area is now a waste stock pile, the fate of these particular Wallabies or the actual colony is unknown. 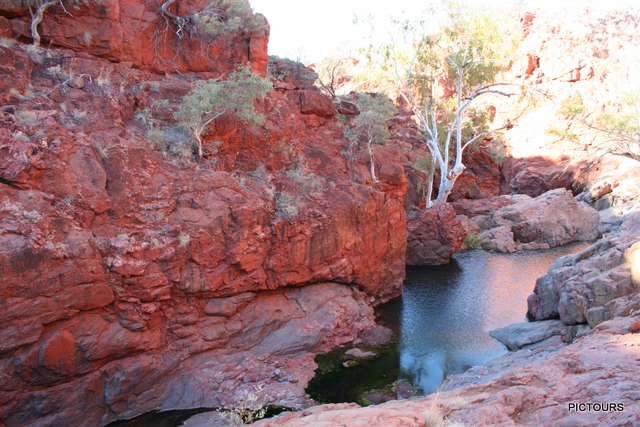