G'day Adventurers
I trust everyone is safe, in saying this I feel for the folks enduring the above average temperatures and the un-seasonal fire storms that make the daily evening news headlines.
Here in the Pilbara but more so in the home paddock the East Pilbara is it's usual temperature baking hot, with blustery desert winds that just seem to amp up the heat, nothing actually gets to cool down and everything stays hot, the only cold/cool water is in the hot water system on the house, primarily because the pipework is 'lagged' ~ so I can get about 60 seconds of cold water during a shower.

Now for the 'Out'n'About' part of my post, I saddled up and drove out of town on Sunday, just to have a squiz at the worlds biggest iron ore mine, that's still under construction, BHP call this mega pox South Flank, reputed to cost somewhere close to $5 Billion and they are set to mine 80 million tonnes of ore per year, starting in 2021 and it's expected life span is around 25 years, but like all previous estimations on mine life span this is a bull shit figure, anyway the whole shit show is going to change the face of the Pilbara irreversibly ~ all good though say's the government.

The inland Pilbara creek systems are usually bone Motherless Dry even at this time of the season, the official wet season has begun to count down, there have been some rather spectacular late afternoon/evening thunder storms, but little useful rain, 28 mills in the guage from one cloud burst was enough to get the back yard lawn to think about greening up.

We headed in to Weeli Wolli Spring(s) via a couple of yet to be completely closed by mining access tracks, up and over someones bloody rail line, in through and around their mine waste dumps, around a gate that wasn't there previously and 'bingo' along their dewatering pipeline, past a big interpretive sign telling the world how well they are looking after the environment, down into the dry section of Weeli Wolli creek and into the flow area of what was the natural spring(s) that fed the cascades, this has but all dried up since the under mine aquifer has been managed by the miner and at some 40,000 kilolitres per day, that's a huge amount of pure fresh water being manipulated so they can chase the ore lode.

There is an open to the public picnic area if you feel like being impressed by their manipulation of the environment.

So into the cool rushing water down stream of the dewatering pipeline outlet, not too bad at all, you just have to hang on to the limestone reef so you don't get flushed away.

An hour or so rehydrating in what's become a nice place at first glance, just a shame that it is as fake as today's Christmas, the hour or so that it took to get back home was fairly quiet, not a lot said really, we just observed the onslaught of industry and tried not to focus too hard on the shiny new power line pylons and drill pads bulldozed into the once pristine hills of iron that make up the Hamersley Ranges in the inland Pilbara. 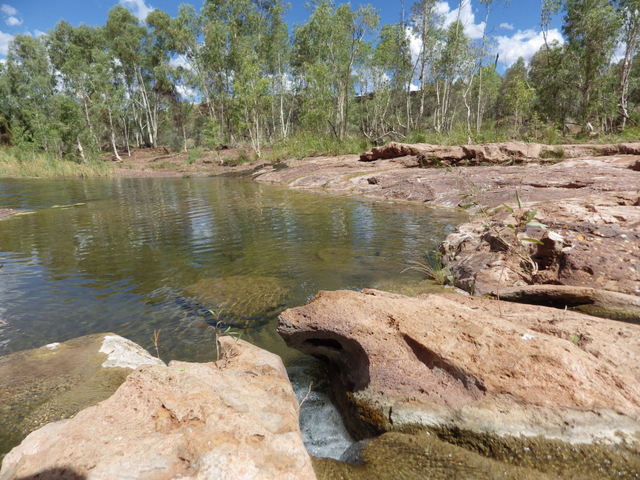 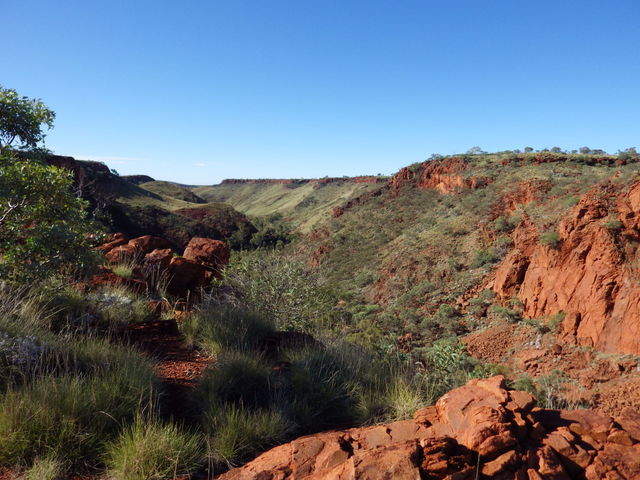 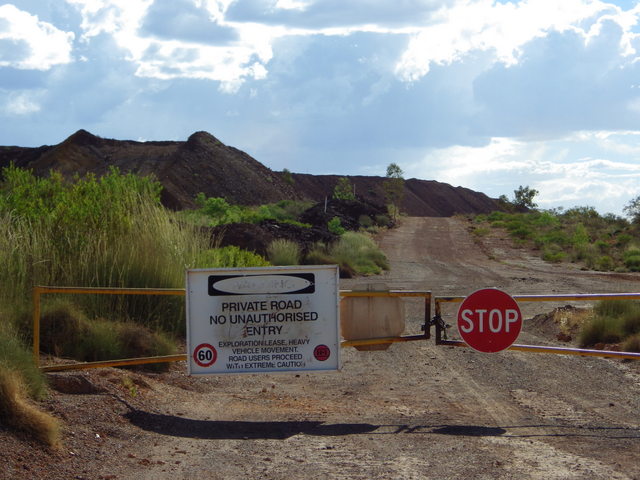 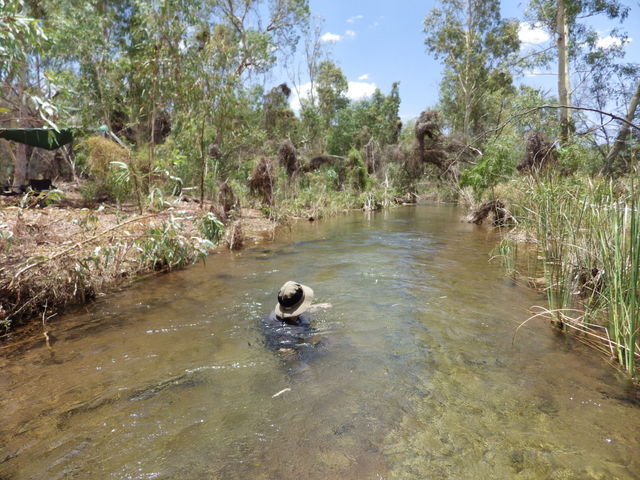 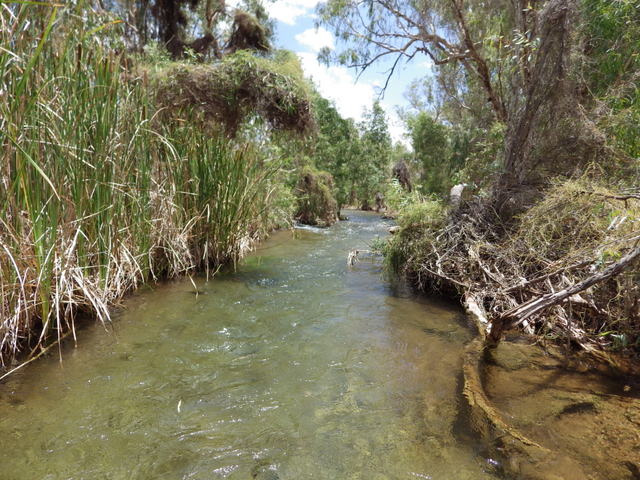 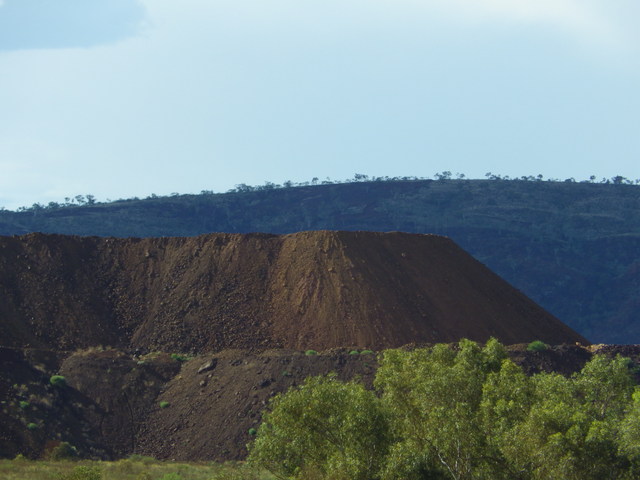 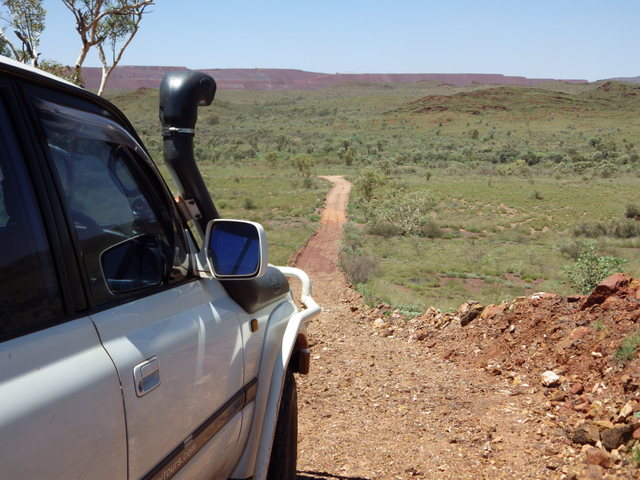 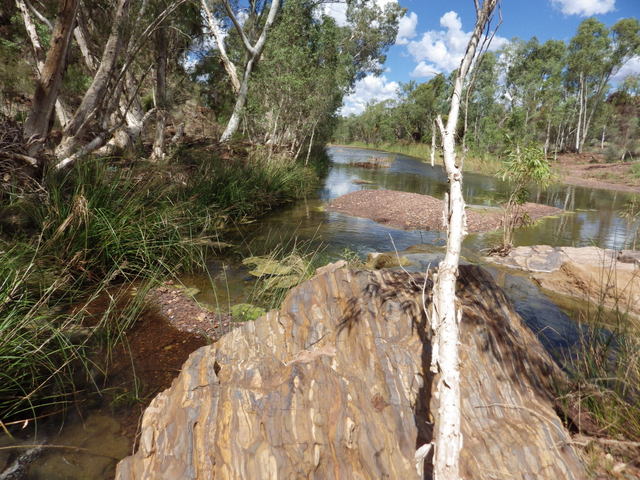