Well, to those who are still home waiting for the right time to leave, I add this report for day 1 to see what's going on.

Grumpy, Gunna, BEK, Knackers and Nickj met at McDonalds Thursday morning for an early start to the weekend. I decided to take the bike as I haven't been out on it for a while. (Honda 650 Dominator adventure bike)
Grumpy lead to the Thompson Dam wall where we stopped for the last flushing toilet! I lead people in so as not to get covered in dust on the bike, with all others in tow. We took the easier route option, which was via Merringtons, 3 river crossings (WET LEGS AND BOOTS), Junction Tk, Donnolley's Creek Tk as there were 3 trailers in tow. I nearly came a gutser during the first crossing but stablised and ventured on.
We stopped at Jorgensens Hut to look around for firewood, but decided to head directly to O'Tooles and begin the set up. A couple of the rear cars stopped to take photos at the river crossing (never seen water before?) and we arrived at O'Toole's just before lunch. There was a sole tent at the rear of the camping ground (hope he's not looking for a peaceful weekend with the Mrs) We had a bite to eat, set up the Registration tent and the Taj Mahal and headed off for some firewood, which we found an abundance of closeby. 2.5 trailer loads later, we had enough wood to keep us warm for some time. The weather - sunny, warm and a little wind. The forecast says rain Friday and Saturday so bring your best muddies, just in case.
Here's the only pic I took of the almost vacant grounds. I left the boys at around 4:00pm to head home before the bugs came out.
See you Friday night.
Nick 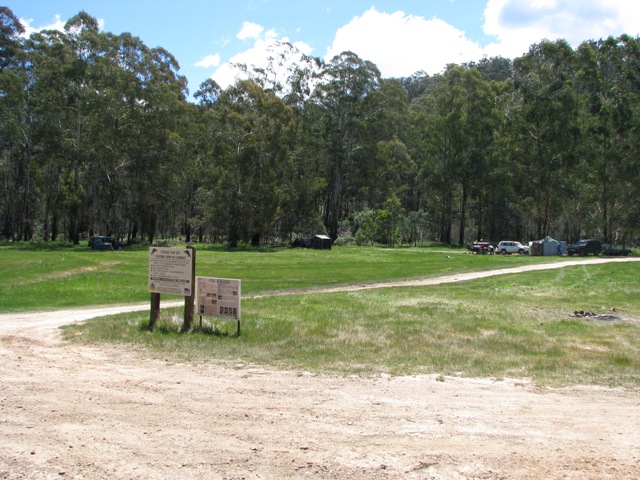 I don't think many more turned up.