Have we got an update on the situation yet.
From what I hear the adjacent land owners are complaining about people riding their trail bikes and driving their vehicles, with the vehicles part it is late at night.
I can understand where they are coming from, who wants to listen to bikes revving all day every day, as well as 4wds late at night when people are trying to sleep (children).

Hi Crozza ive herd no more since we were up there at xmas but we had no trouble with residents in fact the last day we were there we acutally had to come out through private prorerty after getting caught buy a rapidly rising creek. all i did was stop well outside the gentlemans property walked in and asked if we could get out via his property due to rain, he had no problem what so ever and even offerd to help us if we needed it. Not sure were this was in relation to problem area but we came out only about 500m off cliffs Barons Rd this is only an approximatley location i forgot to log it when we came out 27°48'29.14"S 153°13'26.37"E

I'm sure it is the bikes they complain about, you can even see where they ride by all the single line tracks, they just tear up the place, and who wants to listen to bikes all day everyday.

I have seen the bike riders closer to the top of the range where Shaws Pocket Road hits Cliffs Barron Road meet. I have found property owners like people that make the effort to ask if it is ok to pass through. We met a guy that allowed us to good up through is property to access the track behind his house but us asked him. He was ok about it and we did the right thing and cleared the fire breaks for him.

I went up there for the first time on the week end with the kids, what a great spot, there was a couple of 4x4 groups getting around didn't see any bikes. Does anyone have a map of the area that they have marked some tracks on that they could upload so I get a idea were to drive. Thanks Guys

croozza said:
I'm sure it is the bikes they complain about, you can even see where they ride by all the single line tracks, they just tear up the place, and who wants to listen to bikes all day everyday.
Click to expand...

The biggest issue is that, a few years ago, a young bloke was seriously injured when a homemade bullbar came off a Hilux and the young bloke was way to close and was cleaned up. He in turn sued the driver of one of the Vehicles and, from what I am let to believe, the insurance company then sued the property owner. That is when the crud hit the fan and the big rocks arrived and the area was fenced.

Some of the roads are public and gazzetted, some are private. The public roads are the easy ones but the fun side tracks seem to be mainly on private property. Some people don't mind if you drive on them and of coarse, some do, for obvious reasons.

I have still not heard anything back from the Council at this stage. I see it still gets used lots and I thin it will until some clearer information is presented. Still a great place for a run, great to take the kids and putter around., they love the creek beds and the nature thing as well. Spiders are optional

Still not happy with the dumping and car burnings that happen and I see that as the biggest issue to the area.

Yeah we went in there yesterday arvo, Quiet greasy after the rain we had but still alot of fun... I need to invest in some decent tyres tho coz i found myself sliding around alot and getting jammed in ruts... still a great day out..... Oh by the way there was a (new) hilux stuck down the bottom of the upper ormeau rd entrance lol and guess what it was excavated by??..... What else but a patrol..... Note to self, Dont go when its raining!!!!
F

was up there today, had photo taken by security acting on behalf of quarry owners .. they are logging all users of this area ,for a big sting .. the road is public ,,but not gazzeted,, therefore we are subject to penalty ... inside of private property signage is illegal, and if caught you will be prosecuted, all other trails are being monitored... all this information is from security guard, employed to sit at entrance to track at upper ormeau rd ...
N

Went for a look around there recently to see what is going on stuck to the so called "public" tracks and had a pretty good time out there on my own.
Found some tracks that i have never been on that lead to some amazing lookouts and as far as i could tell all were on the Main Access tracks.
Stayed away from all the areas that say keep out and still had a ball.
I noticed that the teacup area was not signed as keep out, Not sure if its a no go or not???

nothawhiteGQ said:
Went for a look around there recently to see what is going on stuck to the so called "public" tracks and had a pretty good time out there on my own.
Found some tracks that i have never been on that lead to some amazing lookouts and as far as i could tell all were on the Main Access tracks.
Stayed away from all the areas that say keep out and still had a ball.
I noticed that the teacup area was not signed as keep out, Not sure if its a no go or not???

Were you on Shaw's Pocket Road?
N

Yeah i went in and out through there.

Were you out that way??

nothawhiteGQ said:
Yeah i went in and out through there.

I have been through there but not recently. I have to arrange a new 4by before I hit the tracks again. I will be left seating at least to new years by looks.
R

My daughter lives on Shaw's Pocket Road and I know her husband drives some tracks in the area.
N

Spent about 4 hours in there today pulling car bodies out, thought it would be nice to have a bit of a clean up, Stoped and spoke to the security guys there on my way in.
They were nice enough and happy to have a chat, I asked how things were going and they said that the amount of 4x4s going onto the quarry land had been greatly reduced but there was still a few not getting the idea. But they were more concerned about the bikes numbers were aparently up.
The Main track is still open for now and is not owned by the quarry so you can still drive it and it would be fun in unmodified vehicles.
They said the main track could be closed permenantly to all vehicles soon (even them) which would be a shame as theres a few nice views up near the top.
Anyway heres a few pics..
Towing the tandem trailer around was interesting !! 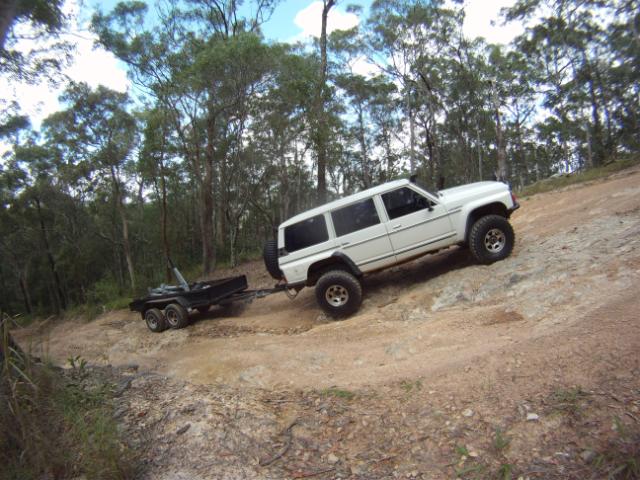 Im stuffed now it was pretty hot out there today..

Keen and eager and looking for new tracks in SEQ to try. Shaws Pocket Road, I just looked it up on Google Maps, where abouts do you enter the tracks from along there? Also looks like a lot of tracks off Upper Ormeau Road, can anyone confirm please? ta

Anything off Cedar Creek Road?

Careful Pajnut, not to sure of the legalities out there now if you get caught in that area. read back through this thread to get more of an idea.
Great variety of tracks out there, but if you get caught the consequences could be harsh (not that i know what they are)!!
PLenty of other tracks around this end of SEQLD anyway

Cheers mate, from reading it seems there are still some public tracks open (as of last month anyway), might head up there Sat'day arv and see what's cooking!
N

You can still go in there but basically if you go of the main track you are going into private property.
All the good tracks are on private land, most of which is owned by the quarry.
There are security guards there most days keeping an eye out, They are nice guys and if your not sure you should ask them.
Follow upper ormeau rd untill you see the dirt track on the right, thats were the security guards are.
Follow the main track all the way around and youll come out at the water tower.
Its pretty easy going.