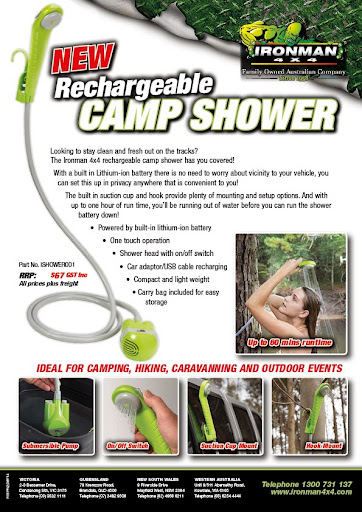 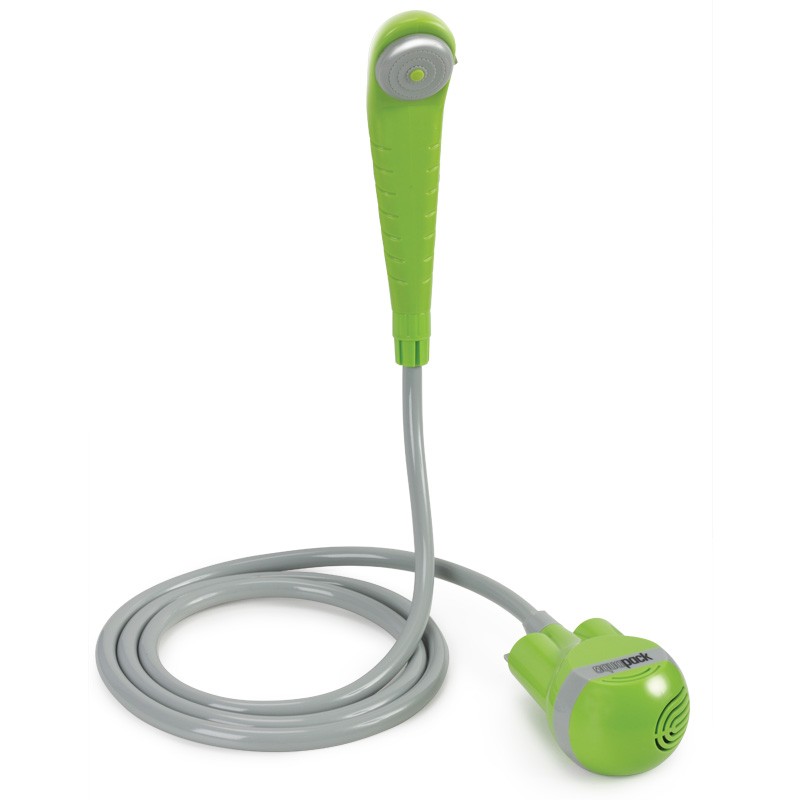 This review is a bit different for me as I've owned a Coleman Shower for over 5 years now, so I've been spoilt a bit with pump pressure/heat etc, so I asked a couple of mates that came along camping to look at it also and asked for there views ..

This shower is designed for people to have a quick shower requiring a bucket of water ,You have to work out the temperature by feel although a thermometer wouldn't go a stray and full charge will last about 1 hour, considering each shower only last around 5-10 min max you'll be able to shower the average family easily. I was advised to put the shower on charge for 5 hours initially from unpacking it. Future top ups from 240 volts recharge in half that time, charging through the usb supplied will take about 5hrs if it's flat.

I found the pump pressure good enough to do the job at task, if your unsure I would ask for a demo in-store to make sure your happy enough with the pressure . When the shower head is stuck to the side of your vehicle window I found there was not enough pressure to shower under it without being stuck to the side of the vehicle, the picture's below shows exactly what I mean.I found the best way was to set it up the same way as in my video.A stand and a bucket and a couple of cable ties.I also found that using the hook was too unstable for the showerhead, you'll need the side of a tree etc to stop it from moving about ..The shower has its own on/off switch at the showerhead, this only affects the flow of the water at the shower head not the pump.Leaving it closed for prolonged periods while the pump is still going will eventually shorten the pumps life I believe, if I owned it,the showerhead switch would be left on.That's just my personal choice.The shower pumped out 4.5 litres over 2 minutes which is slightly better than the specs..This was also tested at head height not at ground level. 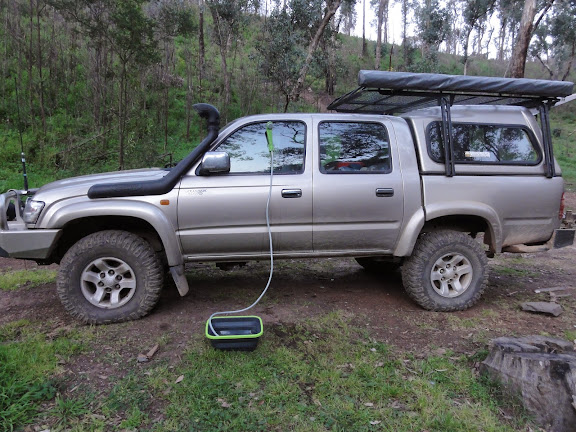 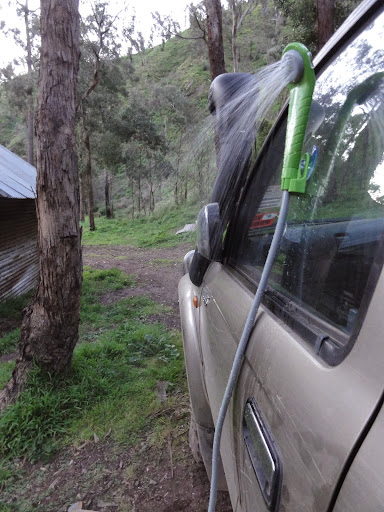 The pump filter is easy to clean,a quick press with fingers at the end cap on the pump end reveals the black filter (do not pull pump apart, screws etc) it will void your warranty,I suggest to use clean water all the time.Also the showerhead can be pulled apart for cleaning or if the spray fan isn't working properly. 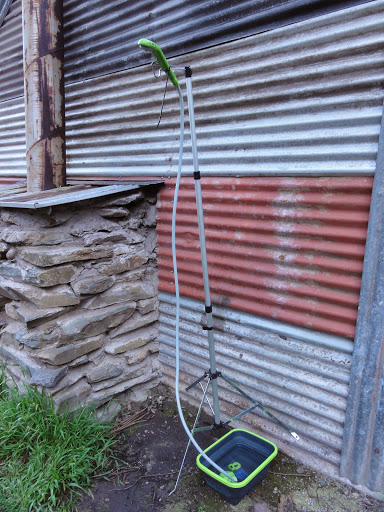 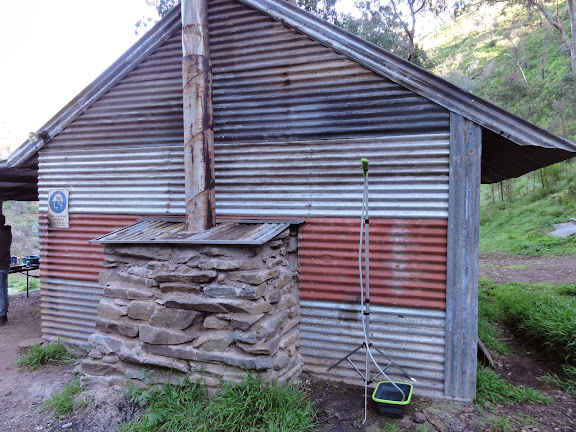 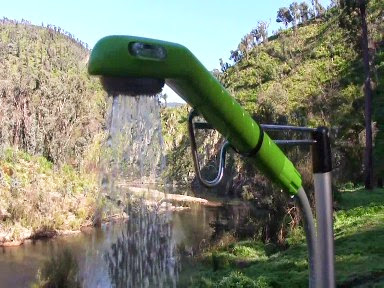 I also tested the units over 50 degrees safety feature so people cannot accidentally get burned,I didn't have a thermometer with me but I did pour into the silicone bucket 2 pots of boiling water from the camp fire , switched the shower on and it failed to pump out the water so the safety feature worked,because my Raytec gun was playing up even after a battery change before taking the gear back I had nothing to measure the temp I'm hoping another forum member could test for me at some stage . "When it comes to anyone who are not able to decide for themselves an adult should always double check the water temp."

Pricing of this unit is $67


Thankyou to Ironman4x4 for letting me review there products. All products have now been returned.

I have been using one of the cheap 12 volt showers for years & worked out one of my pots of boiling water to one of cold water is about right for us. When water is scarce two of us can have a quick shower with 10 ltrs of water.
The problems that I have had with a number of them were the Switches at times - the seal to the pumps that would let water into the pumps & they would rust - the need to run a cable to the vehicle but Hey!, there cheap & do work.

I have changed the pump to a small Bilge Pump & a better switch.

Having one like this is of interest as it does have it's own power but if the battery is flat can you get enough power from the adapter to finish a shower?(Can you test this Swaggie?)

As for hooks & suction cups I have found them pretty useless & use "Reusable Velcro" from Bunnings to hang the shower head at a better angle.
Last edited: Oct 17, 2014

billolga said:
Having one like this is of interest as it does have it's own power but if the battery is flat can you get enough power from the adapter to finish a shower?(Can you test this Swaggie?)
Click to expand...

The shower can't be charged whilst in use as the charging point is on the part that gets submersed and isn't waterproofed (when charging).

I'd suggest you just throw it on charge at night if you know you're planning to have a shower the next day. They run off a USB and most cars now have a permanent power cigarette slot that you can use overnight/during the days drive.

Good review there. Reckon for $67, you can't go wrong.
Of course I always smell nice (like a summer breeze),but might get one for the old bride.

Good review mate, think I'll get one, for the price and compact design would be great for a quick freshen up every 2nd day on a longer trip., like TB said, mainly dor the wife tho

tankbloke said:
Good review there. Reckon for $67, you can't go wrong.
Of course I always smell nice (like a summer breeze),but might get one for the old bride.
Click to expand...

80lover96gxl said:
Good review mate, think I'll get one, for the price and compact design would be great for a quick freshen up every 2nd day on a longer trip., like TB said, mainly dor the wife tho
Click to expand...

Swaggie
Many thanks for doing the review.
Jim

lecruiser said:
Swaggie
Many thanks for doing the review.
Jim
Click to expand...

No worries Jim..
U

Thanks for sharing such information about shower head. Found it helpful.
R

I have had one like that for many years now, the only difference is that there is no switch on mine. I found it is easier to just hand hold the shower head, get wet, drop the head in the bucket with it still runnig so you don't waste water. Then soap up, finally grab the head out of the bucket and rinse. It's small simple and it just works.

On the shower subject anyone found a heat exchanger that works ?

Here's one from JC for under $20
https://www.jaycar.com.au/rechargeable-camping-shower/p/YS2803

OOps, out of stock, dam

Unseelhilr8 said:
Thanks for sharing such information about shower head. Found it helpful.
Click to expand...

Thanks mate there getting a bit old now i need to pull my finger out and write up some new ones.

I have the red Primus one that i bought over a year ago as a back up, as i took there products back to Ironman .
I should do a quick one of that.

Drewswb said:
On the shower subject anyone found a heat exchanger that works ?
Click to expand...