Allanmac organised a trip beginning with the meeting point at Mansfield on Wednesday 8th Nov with plan to come out at Walhalla on the Saturday. Eight vehicles attended including Al (pajero), DiscoMatt (discovery), me-Outrage (patrol), Neil (patrol), Garry with partner Julie (cruiser), Paul (prado), Nick (pajero) and Alex (cruiser - with ls1). The forecast for weather was looking good, the planned tracks included red clay areas which are a nightmare in the wet, so with no rain and only sun and clouds in the sky all was promising.

Wednesday:
We met Wednesday morning in Mansfield, a stop at the bakery and then bp for fuel. Everyone had arrived and we made our way east around 10am. Following the tarmac up to Mt Buller we branched off along Corn Hill Rd airing down on the way to Circuit Rd. Turning up Monument Track to hit our first 4wd track of the trip, its condition is pretty good and being dry we had no dramas getting up, once at the top we turned right to Craigs Hut, but first the disco decided to take a seat on its rear bar. 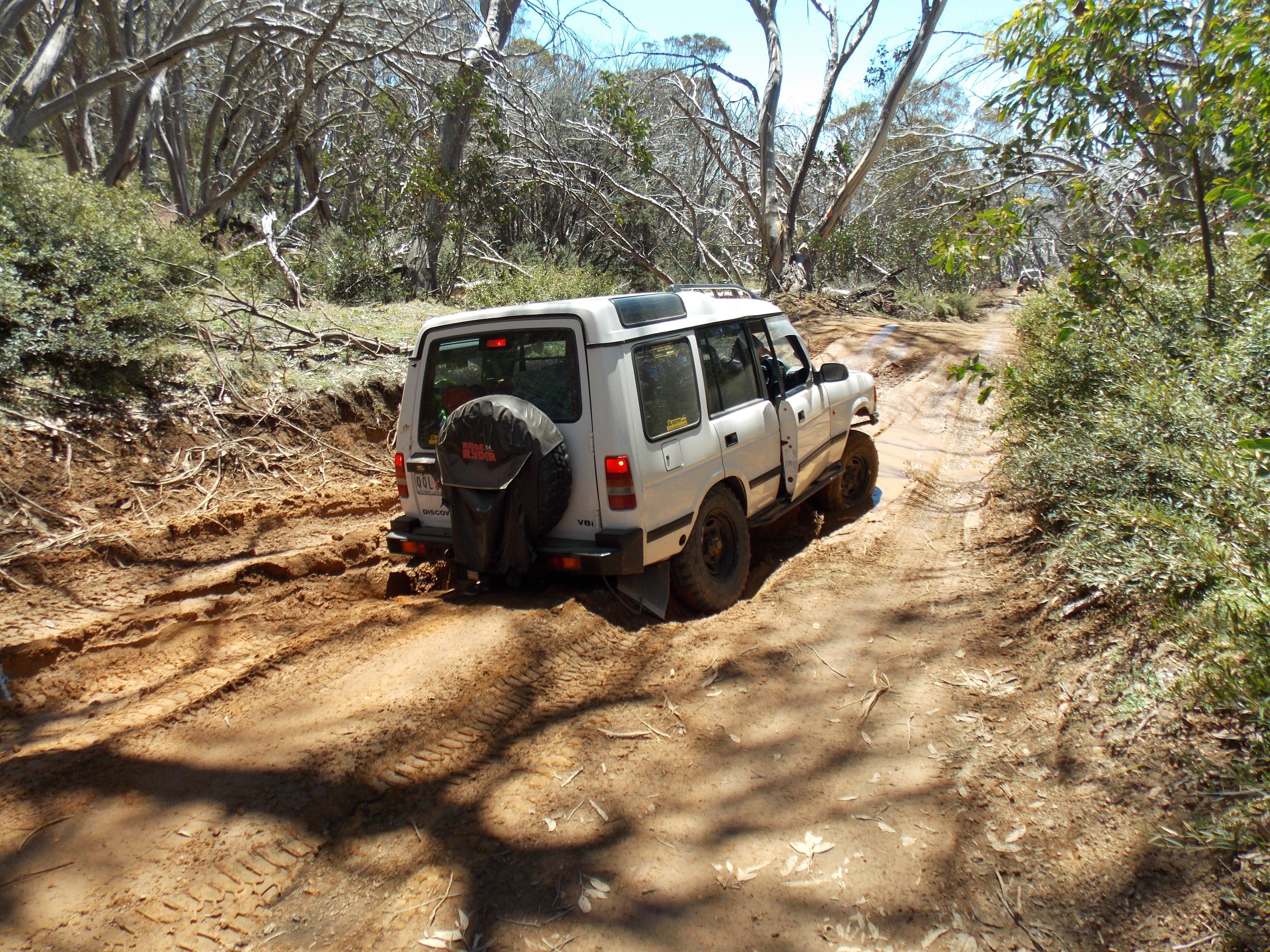 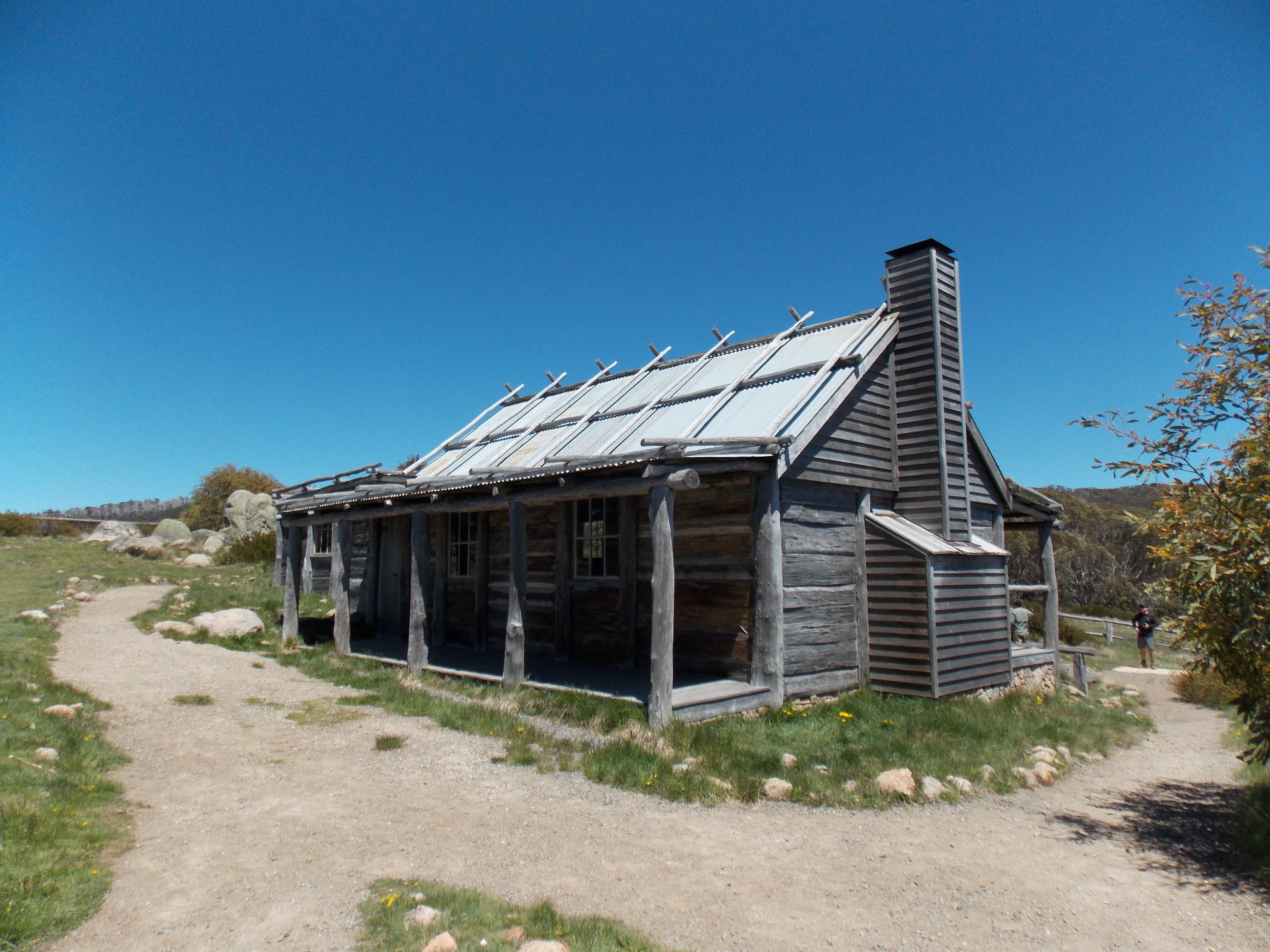 After some lunch we headed back down Monument and made our way to Bindaree Falls. 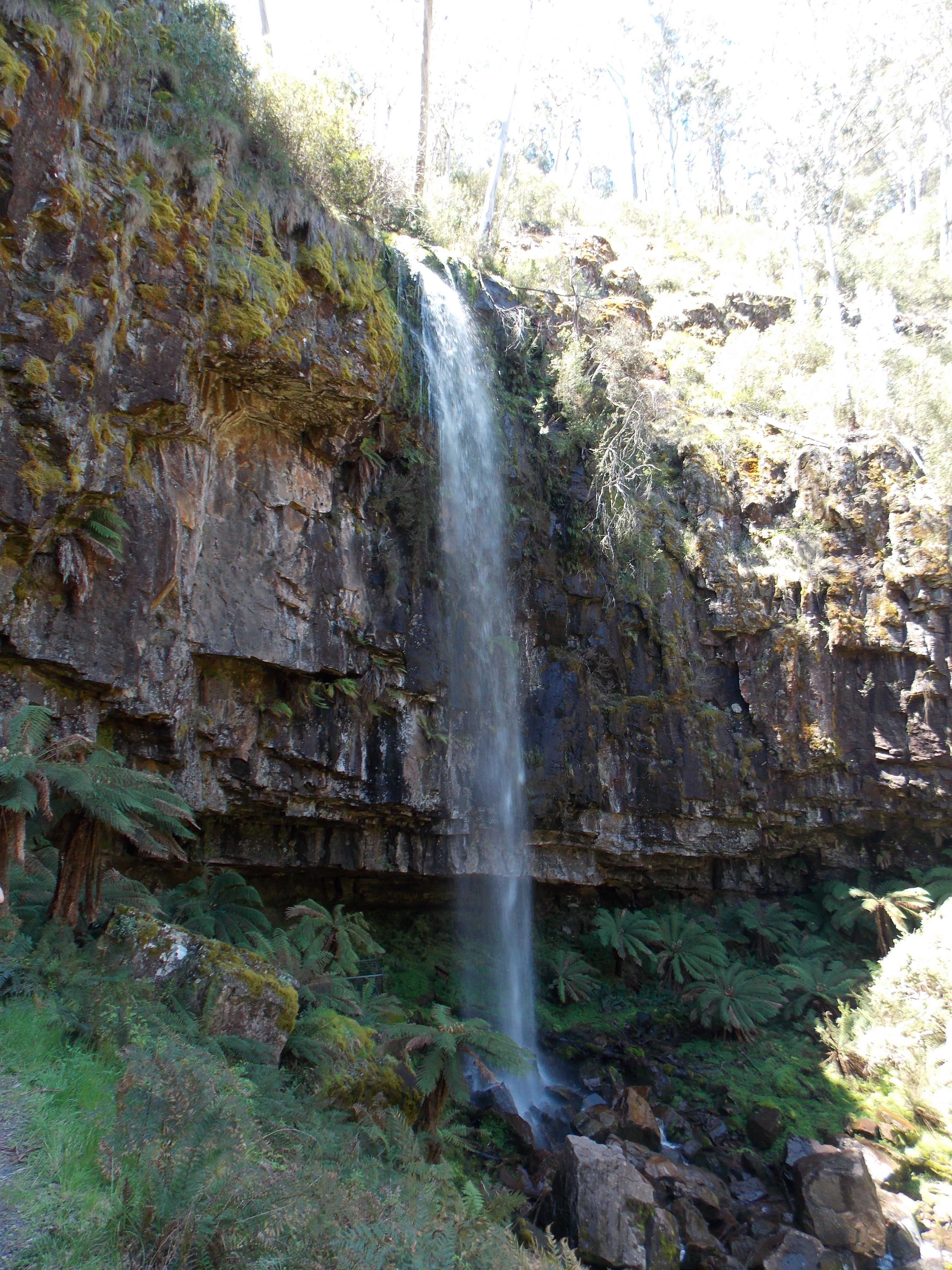 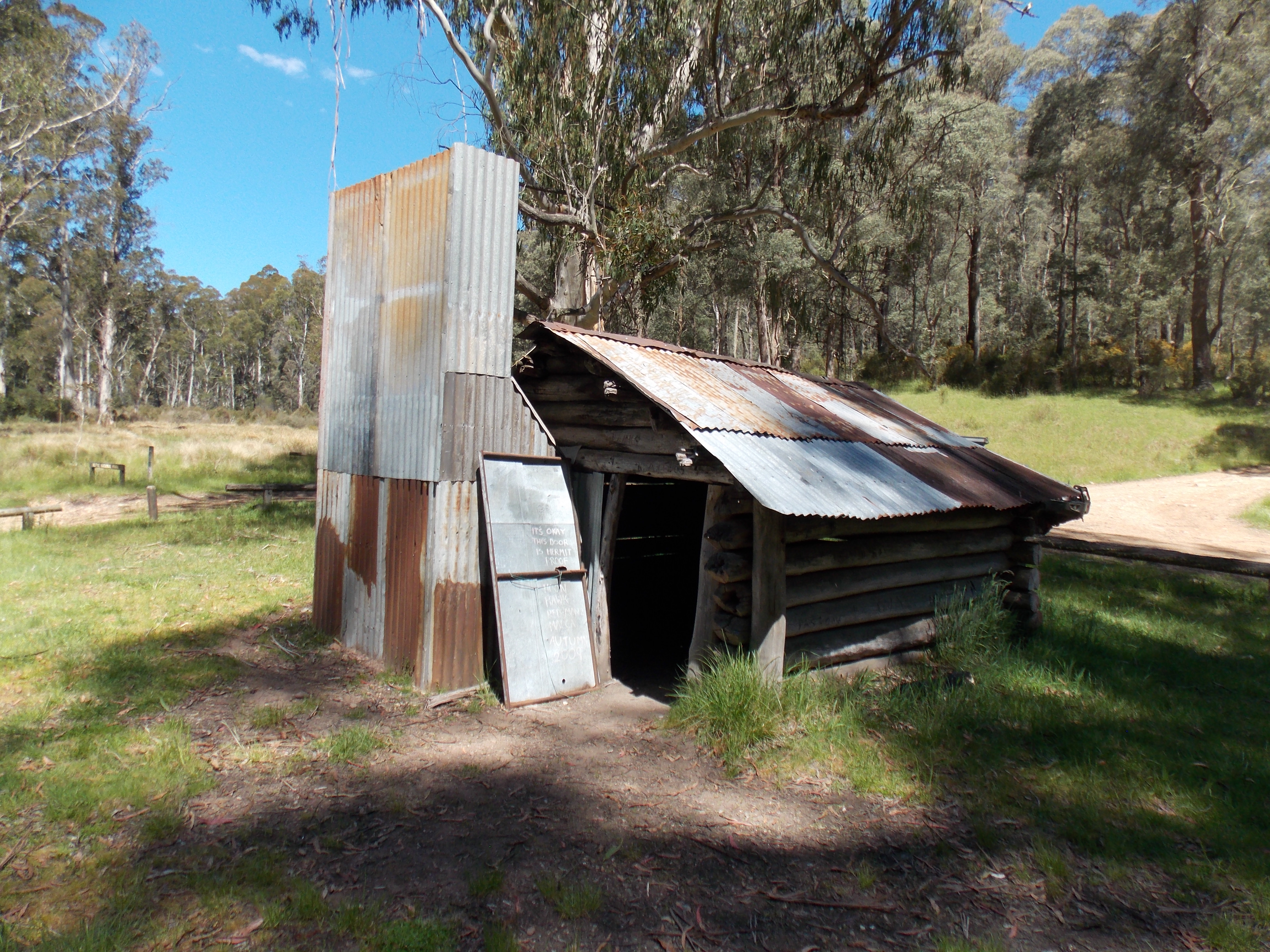 16 Mile Jeep Track was up next, a clay based track that can be quite slippery in the wet, however being dry its a basic climb. Last time I done this track there were a number of fallen/cut trees to negotiaite, but all was clear. Bluff Track to Bluff Hut is also in good condition. 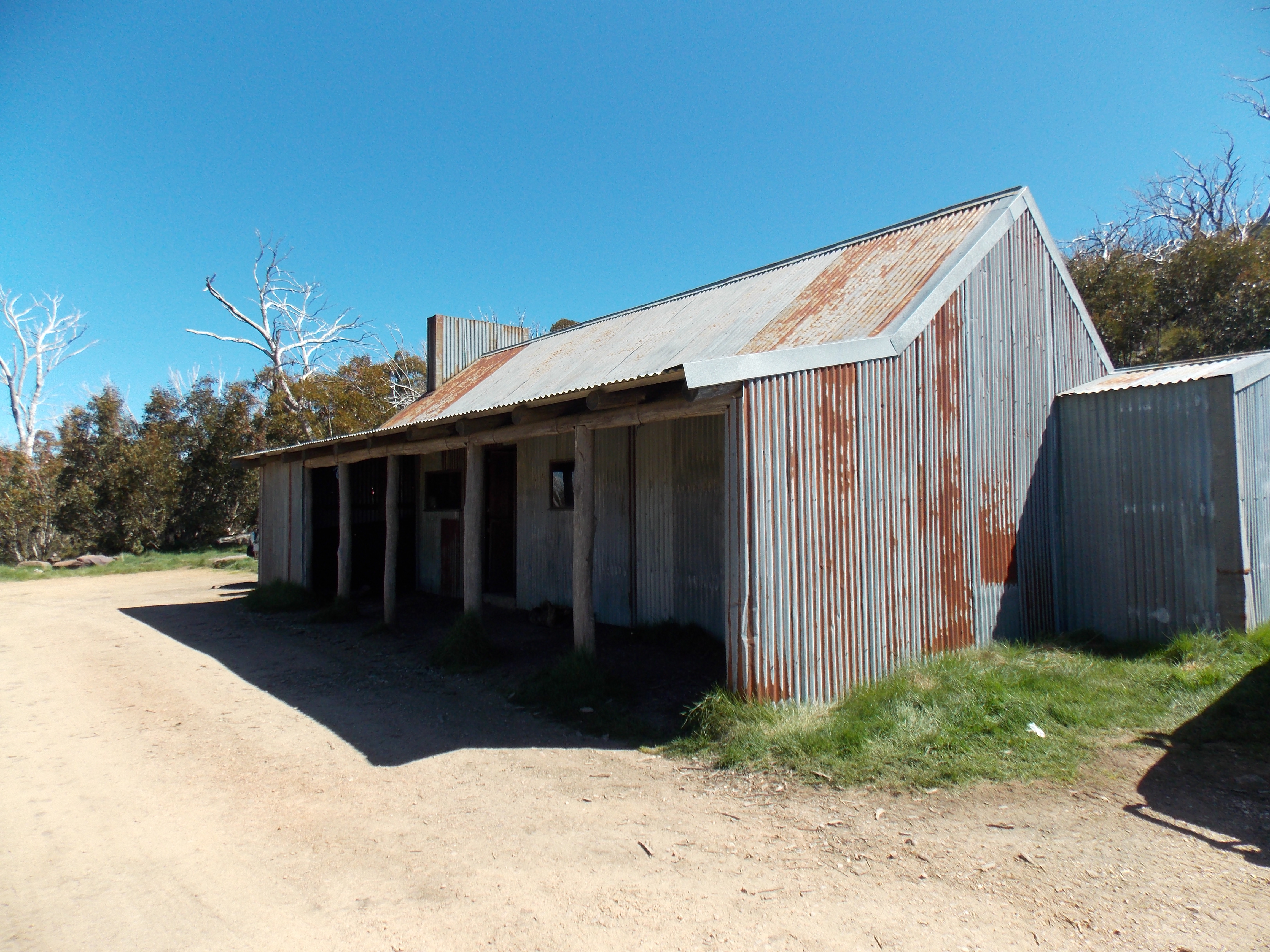 Beyond Bluff Hut, the track slows down considerably with a number of rocky sections, not particularly hard, just slow going unless you want to bounce around. Our stop for the night was Lovicks Hut. 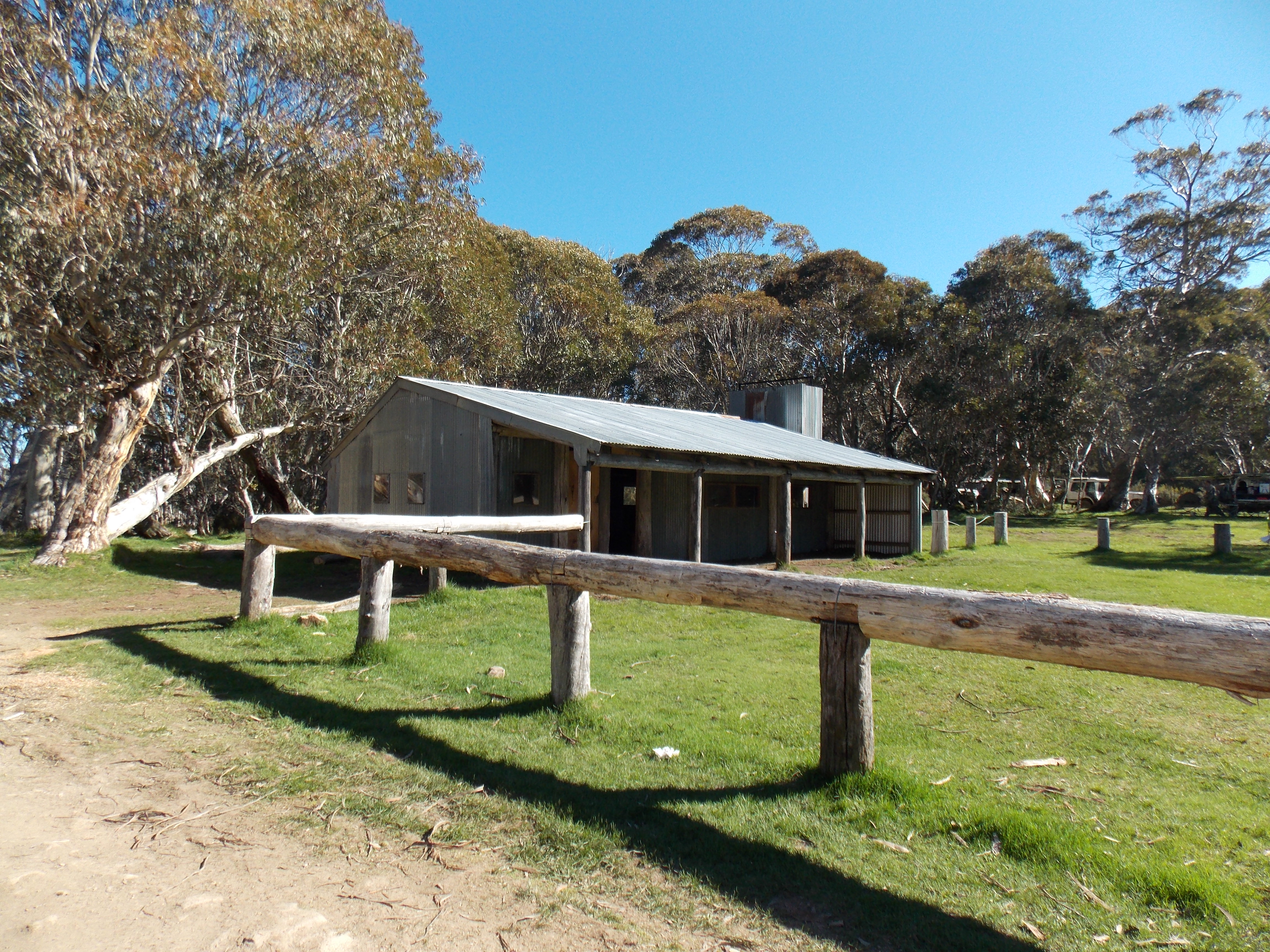 Thursday:
We left camp around 9am to continue along Bluff Track, beyond Lovicks, the track gets even rockier in sections, making for some good video. Picture Point makes for some great views just after the rockiest part of the track. 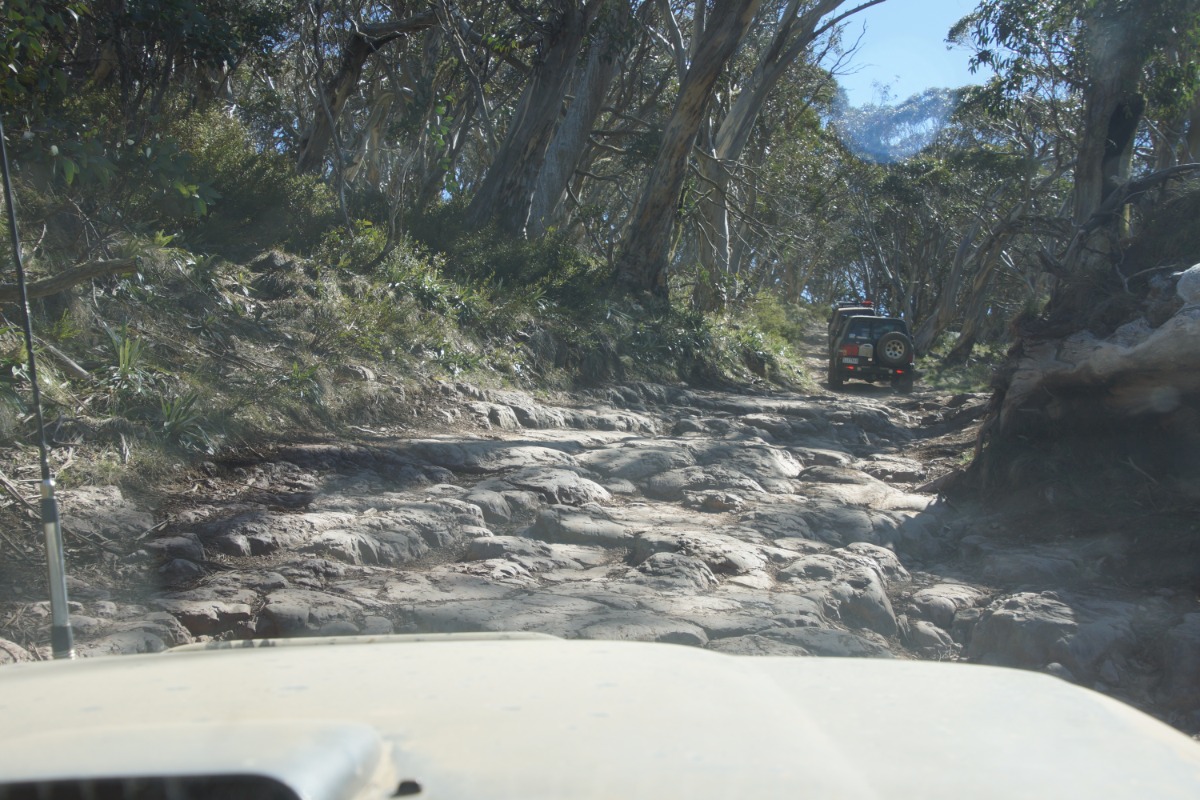 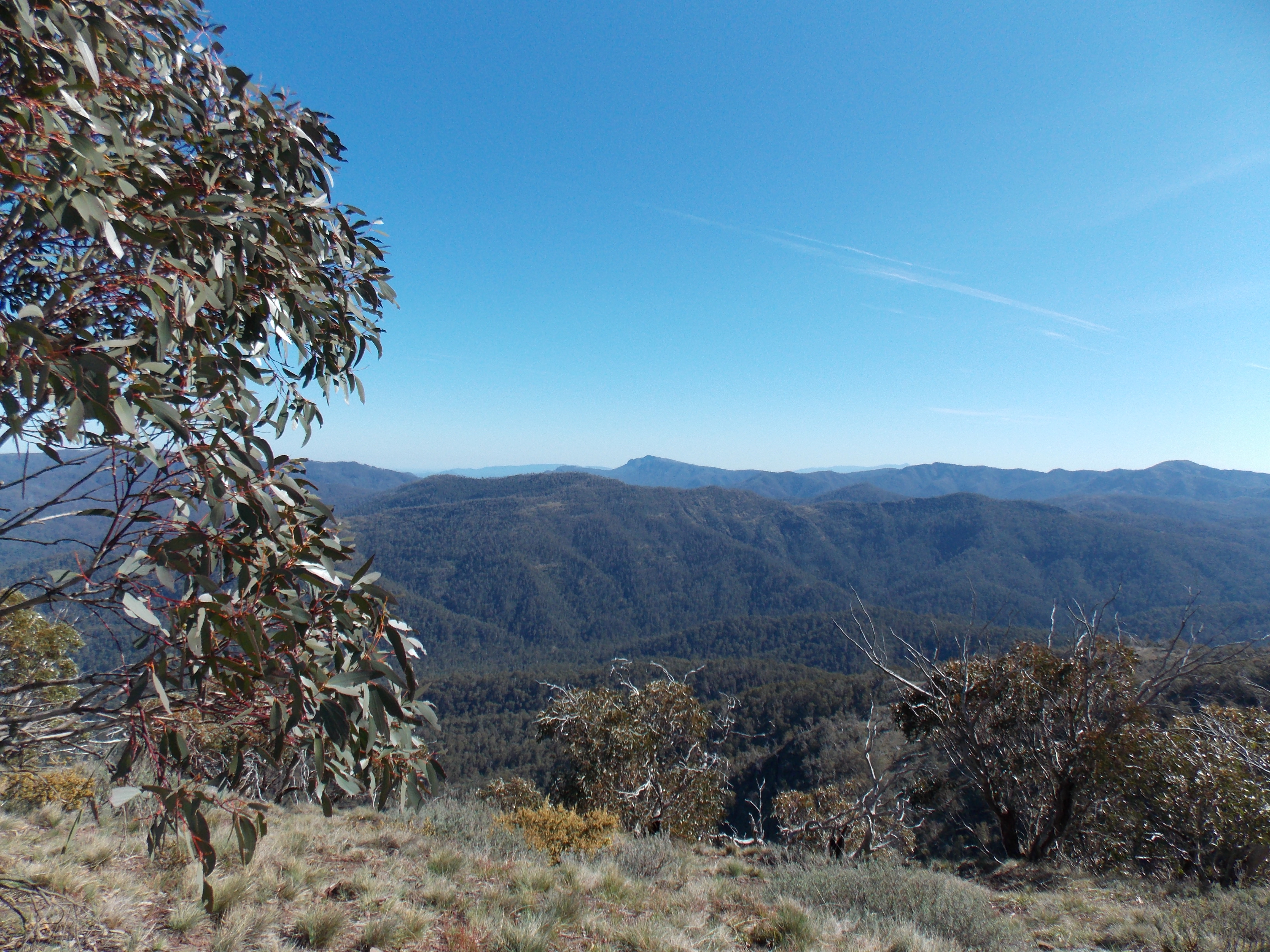 Onto King Billy Rd, again another slow going track, rocky sections and fairly close in with vegetation, a couple creek crossings towards the bottom and then making our way back out of the valley we pass the rock screes. 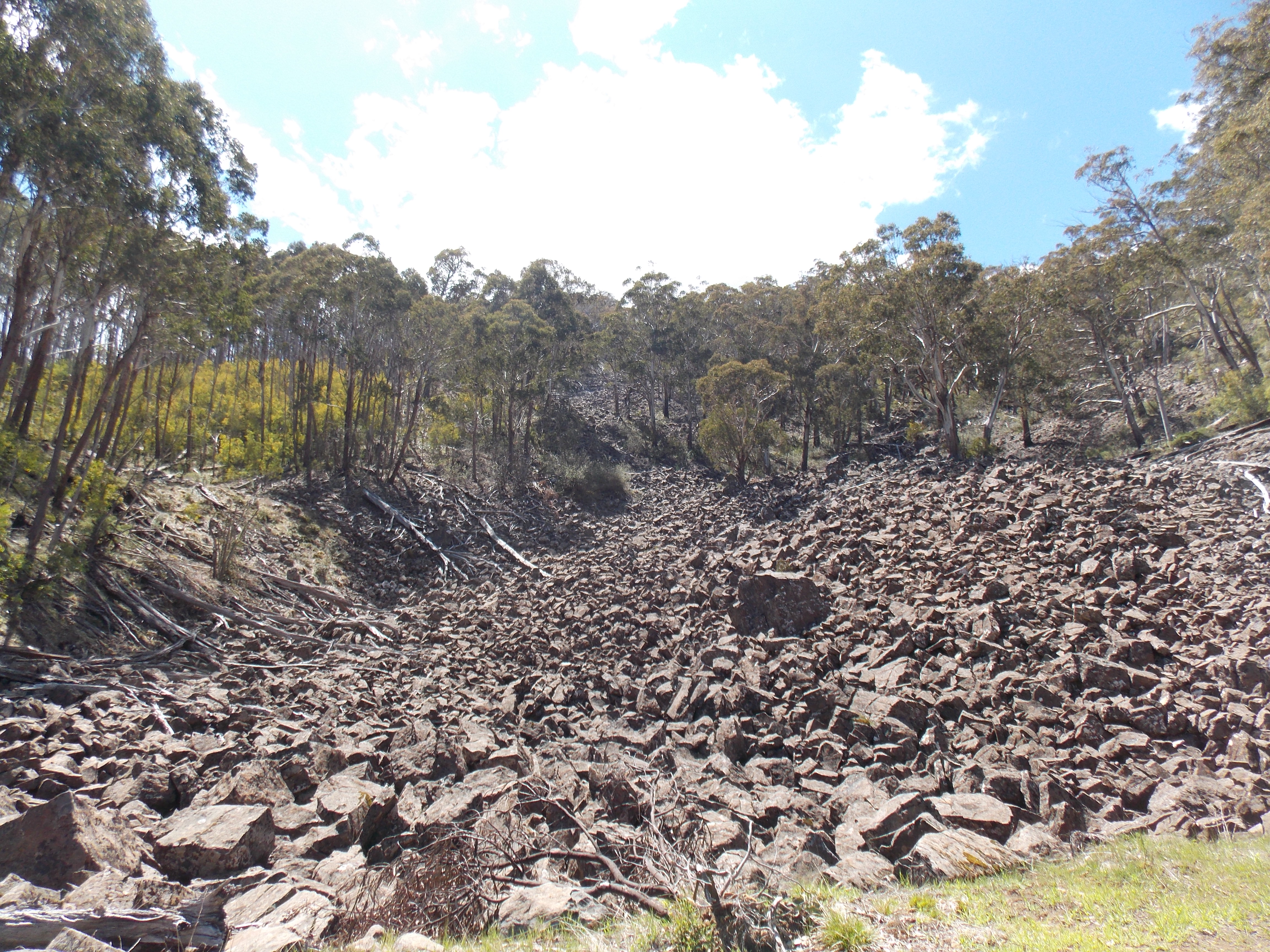 Video part one up to this point.

We stopped for lunch on the Howitt Plains and began our next major track, Butcher Country. The top section is known for its marshy area, resulting in bog holes. 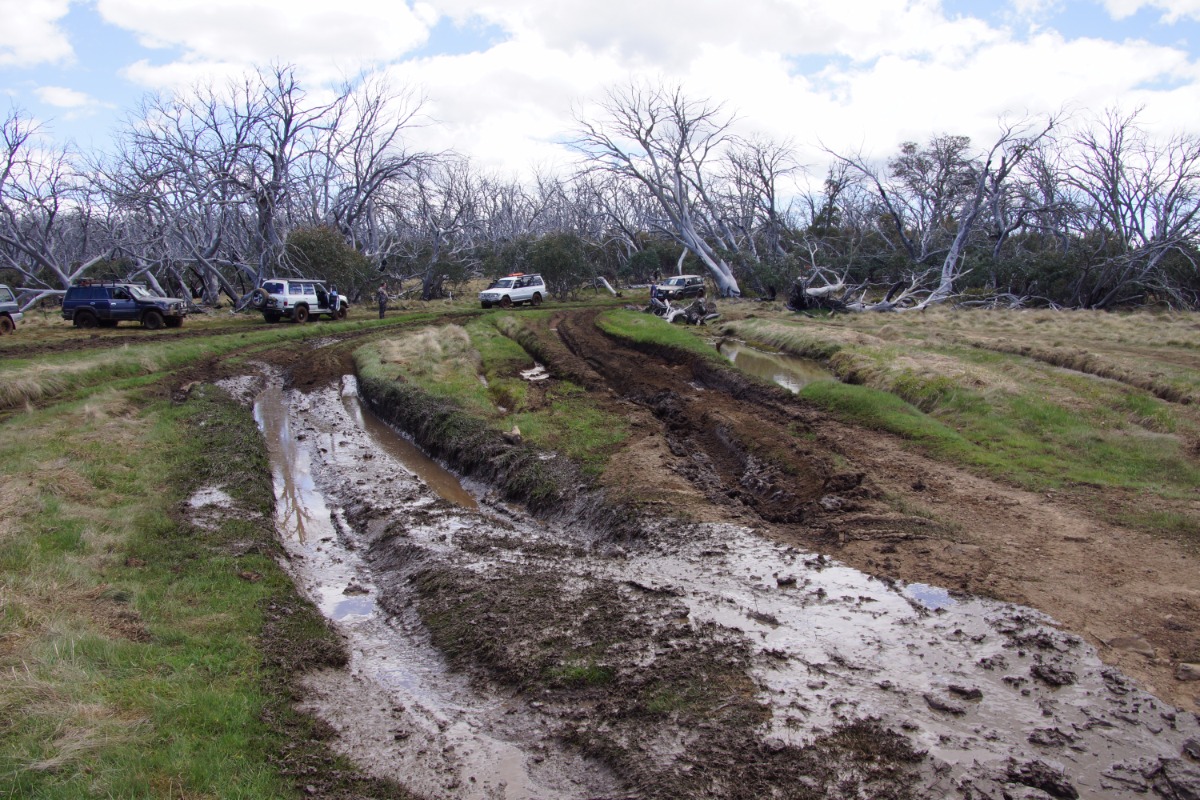 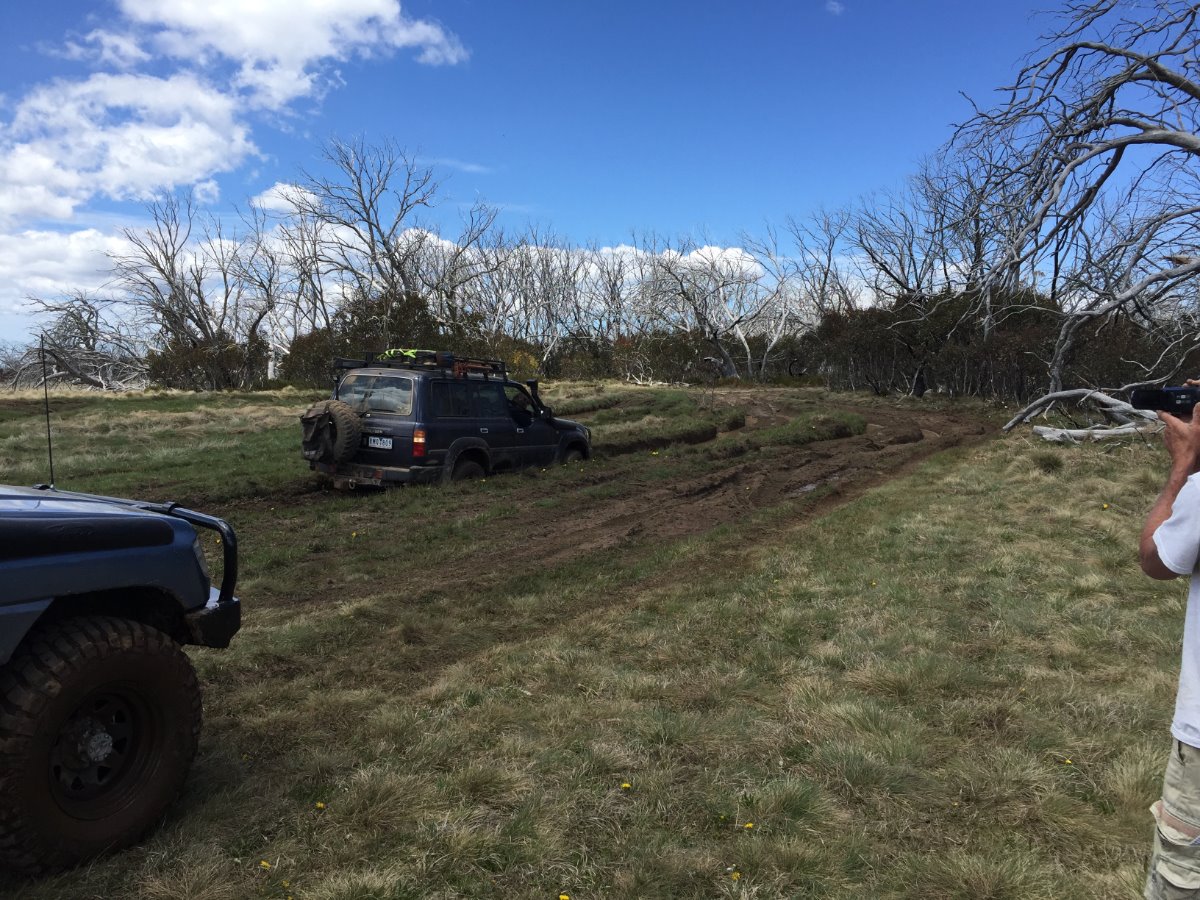 Gary tried first with the result of becoming stuck requiring a snatch out by Alex. DiscoMatt tried another line during this, attemptiong to bail out of one set of ruts and getting part stuck crossing to the next, he worked himself through and powered through to the safe point half way. A few of us were poking sticks in the holes and worked out the best way through and we all made it without anymore issues. After this area the track enters the hills, some areas have gotten quite chewed out and would be a struggle with moisture, one section had noticeable marks right on the edge of the track with no room for error.

The plan was to camp on the Macalister, Al suggested the group branch off and do Dingo Hill Track and then back track. Gary's partner wasn't feeling the best so he opted to head to camp and Al lead him that way. The rest of was headed east and down Butcher Country Link Track, a rather steep/rocky and chewed out descent. This whole area is full of red clay, but again being dry we slowly wound our way down without issue, At the bottom Alex's cruiser was making some noise, deciding to pull over at a camp spot he replaced an idler pulley and all was good. Getting later in the day and most a bit aprehensive about what it would take to climb back up the link track, we opted to turn around here, missing Dingo Hill, and head to the Macalister. We prepared the vehicles with recovery gear on hand expecting to have some trouble. Alex was up front and began the climb up, despite our concerns, traction was actually very good and we all crawled up with drivable lines to miss the bigger holes.

We made it back to Butcher Country Track, took a quick pic at the lookout and started the descent down to the Macalister along with some firewood collection. The track is quite rocky and steep in some sections, but some great views also. 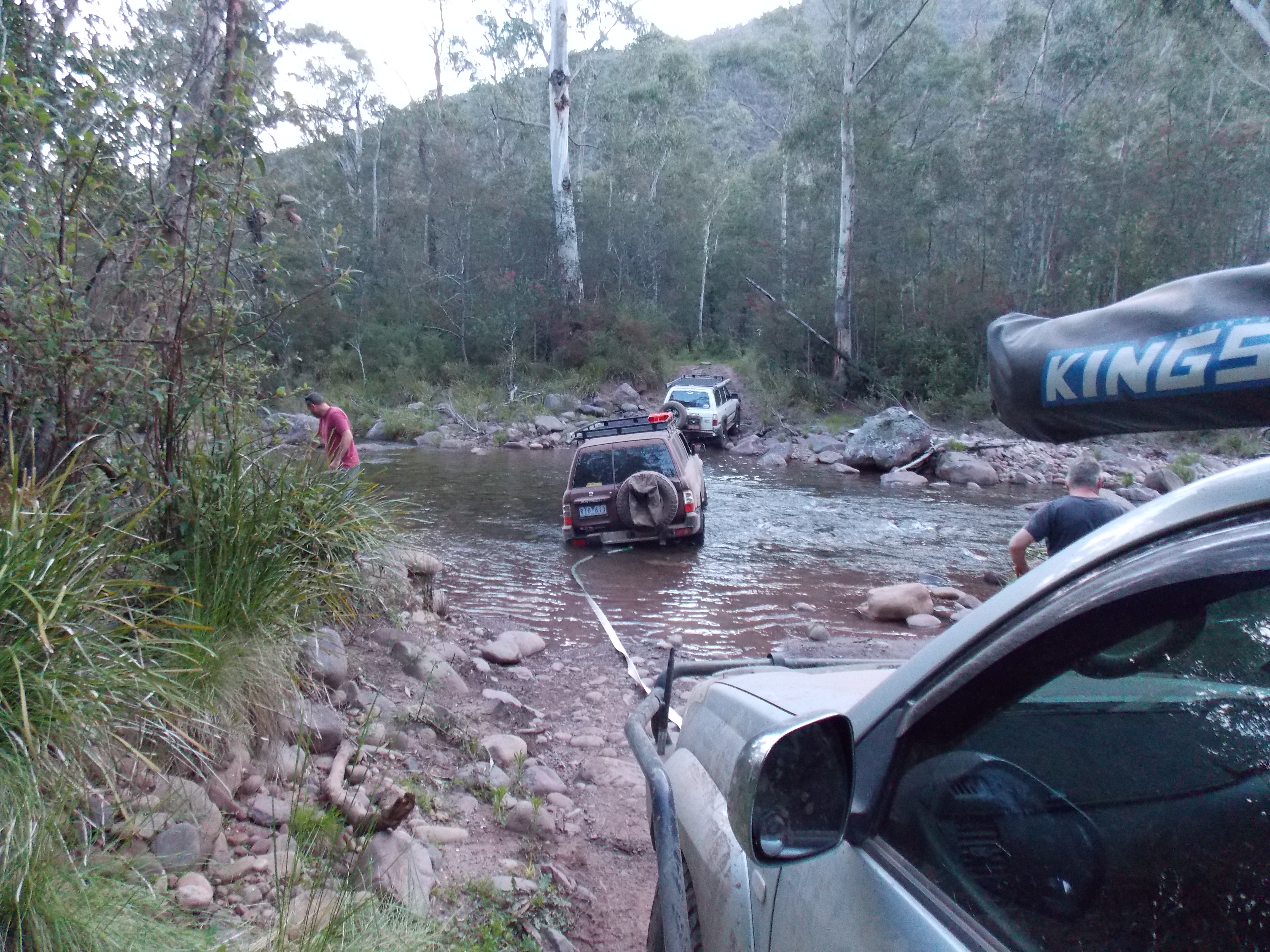 A large series of rocks is in the direct path between entry and exit, a light snatch backwards and a retry keeping left, the rest of us made it through and found Al just prior to the fourth crossing for camp. Friday:
Gary had overheated his brakes the prior day trying to keep slow for his partner not feeling well. He changed his fluid and we were back on the tracks around 9am again, not far along he lost his brakes again and found a bleeder valve hadn't seated properly. Fixed up and we continued on finishing the rest of the Macalister and made our way up Black Soil Track. Parts of this track have gotten quite washed out with some big holes in places, a little bit of banging in one section but we all made it up and into Licola for lunch and fuel. 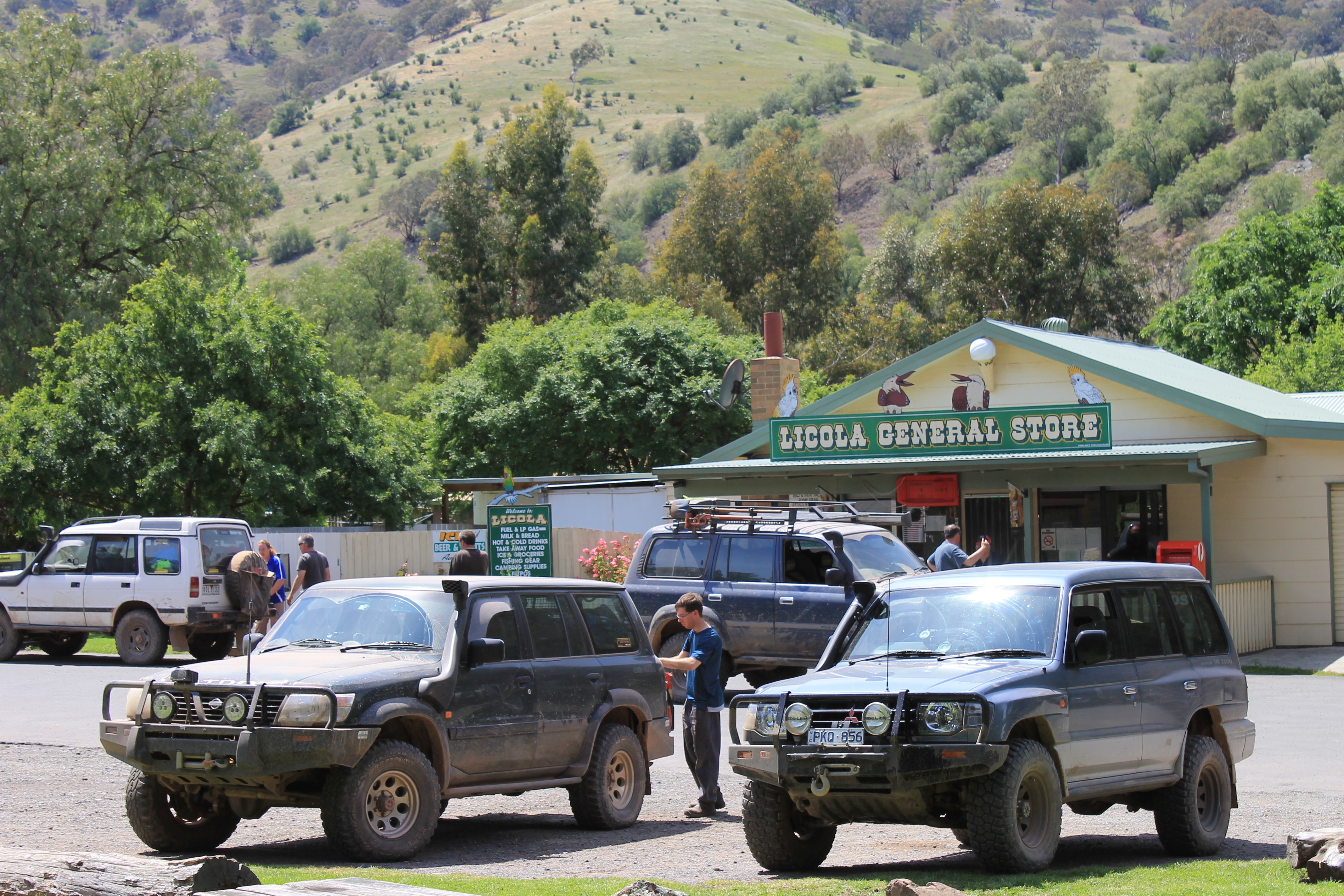 An oil leak was spotted from Neil's patrol when fuelling up and that ended his trip to be on the safe side. Paul in his prado was doing circles listening to a strange noise. More investigation came to the conclusion the rear diff was the culprit which also ended Pauls run. Alex was a bit tired so he would take a shortcut on the tarmac and meet us at Burgoyne's Track while the rest of was headed north to do Mount Margaret Track. Video part 2 up to this point.

Mt Margaret has a long steep rocky red dirt climb, dry conditions made for good traction but still an adventurous climb that keeps going, Nick had a little trouble at one point, the lower flex of the paj without a locker seeing him struggle for traction. Towards the top temp warnings were lighting up for him so we stopped to let things cool down. The rest of Mt Margaret is relatively easy but a fair drive to get to Burgoynes. Burgoynes has some great views descending down to the Licola Rd and also some rocky sections too. 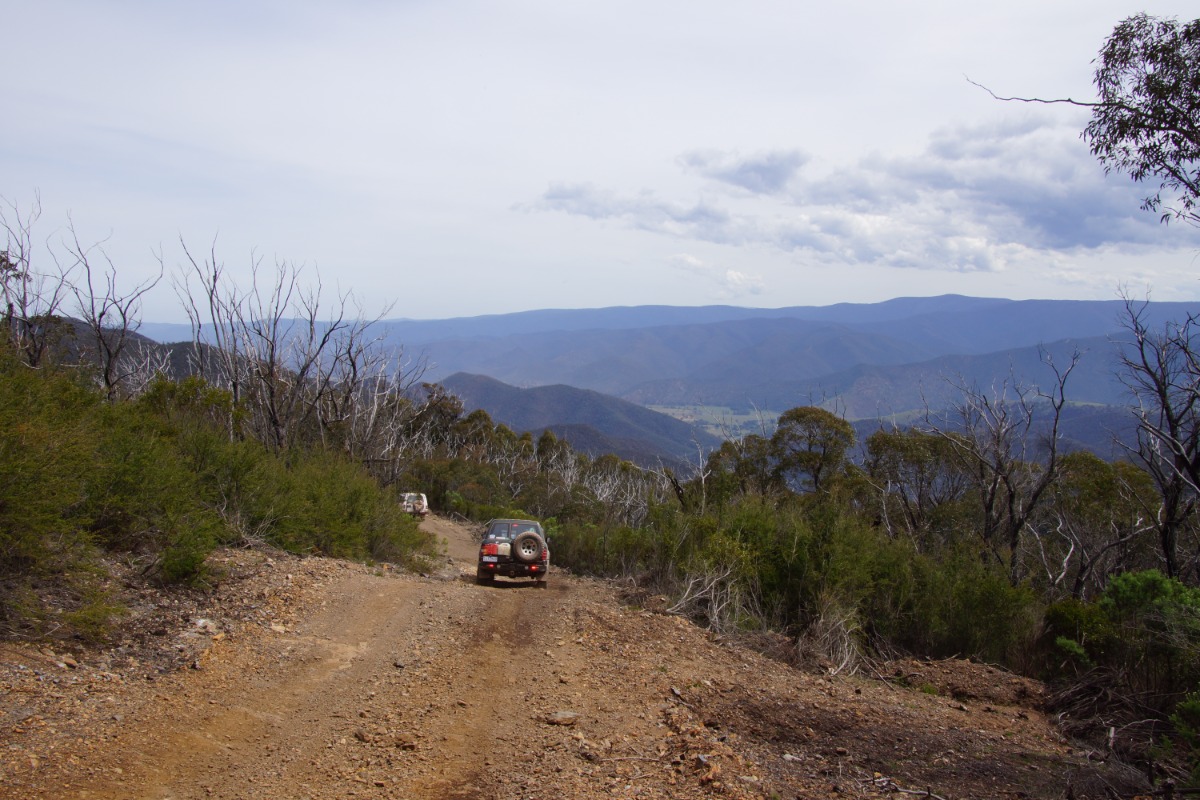 We met Alex at the bottom, crossed the road and made our way up the notorious stairacse of Burgoynes, which is very chewed out, either lockers or higher flex of the cruisers/patrols we could pick our line up but Nick in the middle of the pack struggled at one point, made it through then struggled at another, with each attempt sending him closer to the edge. 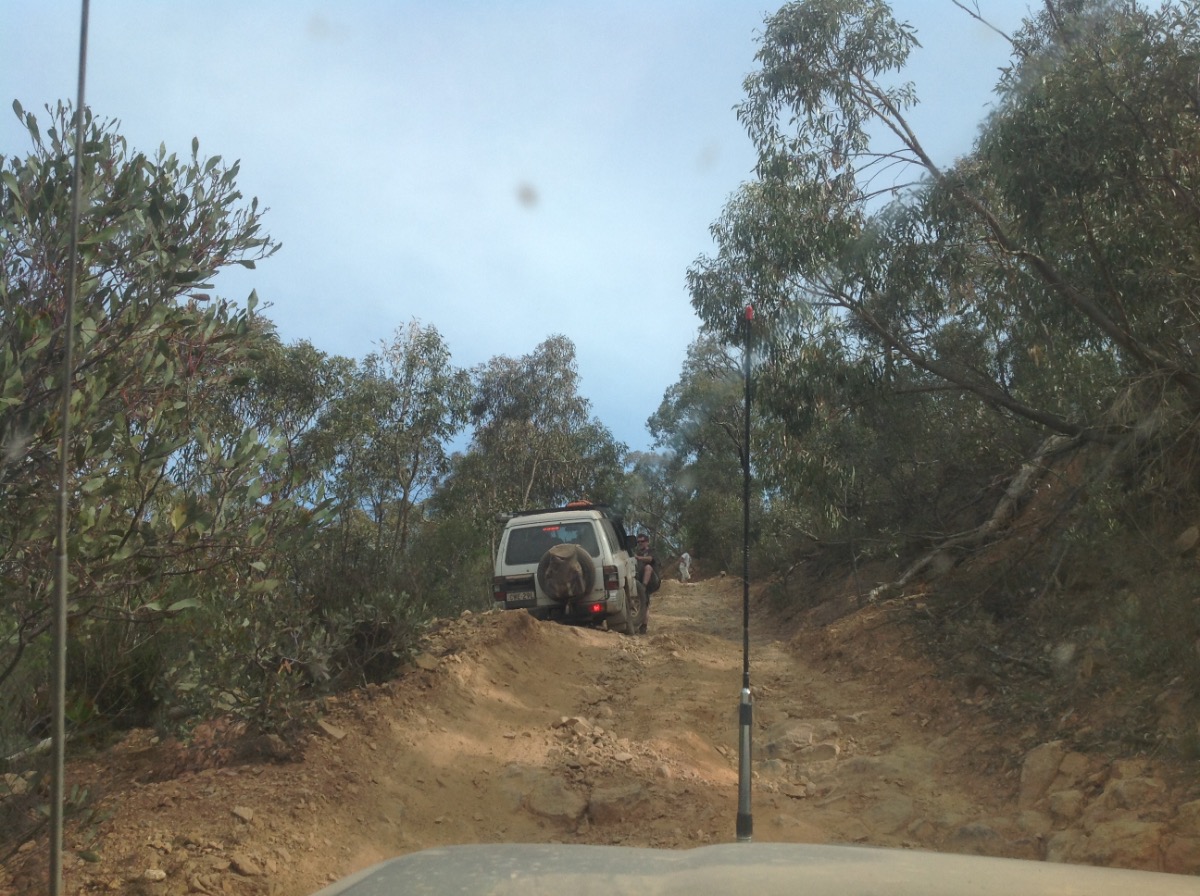 The winch was used, first pulling over a small tree, second attempt was better pulling the paj forward instead. All made it up the stairacse and we begun the next climb. Alex was about to start but felt something wrong with the mighty LS1, he begun the climb and noticed the temp skyrocketing, he stopped and worked out an engine mount had broken and the fan was now jamming on the radiator shroud. Getting later in the day we decided to call it at that, turn around get some firewood and meet Neil at Cheynes bridge camp for the night.

Saturday:
Gary was feeling quite tired himself and decided he would head home from camp, Nick having a drive back to Sydney for home also called it here. This saw Al, DiscoMatt and myself the last to finish the rest of the trip. We headed up Cheynes Bridge Track, some decent climbs but nothing complex, down Morning Star Track, which is steep and rocky in a few sections, up Army Track, again steep and rocky, at a fork, Al took the left and misjudged his line/speed and saw him have to reverse and engage both lockers to make it through, after such a big trip Matt and myself took the easier option and we continued along Army Track, one section down the creek crossing could be slippery in wet being clay based, but not an issue in this weather.

Deep Creek 4 was our next track, down to the creek crossing is in relatively good condition, we had no issue, the climb beyond the creek is very steep and rocky, although a climb we have done a number fo times, all making it up. Our last track of the trip, Deep Creek 1, the descent to the creek from this direction used to be very chewed up with an off camber section to boot, but has been improved considerably, one section still remains choppy but negotiable. The step into the creek makes for some good photos and the drive through the creek is always fantastic. We climbed out, this section starting to return to its belly scraping nature. ​
And the last part to the video.


Into Walhalla for a lunch and aired up, said our farewells and made our way home. For Matt and myself, to prepare for our next trip, the Vic Gathering in just a few days time.

Great Reort, looks like you all had a good trip
Very impressive line up of tracks definitely pass through some of the HC's best !!
Thanks for sharing
Last edited: Jan 10, 2018

Excellent report Matt , shame /or good fortune you didn't get to do the climb out of Burgoynes up to the Springs rd. I did it late October and in its current state would rate it one of the toughest tracks I've done .

Cheers guys, thought it would be worth sharing .

Yeah Luke, we once we hit the track on the west side of the Licola Rd, just judging by the holes at the start, prior to the staircase itself, we thought this is going to be interesting...

A good read thanks.
Heading up that way next month; Sheepyard Flat to the Howitt Rd (then Zeka Tk etc). Will be the first time, not for lack of poring over maps over the years.

A couple of my videos of our trip to add to what Outrage has posted.

Oh no, my number plate! Some good footage Al .

Just thought I would add my last bit of video to Matt's great report.