All the relatives are up for christmas so i thought i would take a few of my cousins up to kin kuna beach on boxing day. Left from childers at about 10:30 towing 3 kayaks on a small trailer behind a 1992 toyota surf. I have done this track a few times just never towing, so i wasn't too worried. Took the southern track woodgate road. This track is a reasonably diverse track with plenty of bends and small gradients. The terrain alternates between hard dirt/gravel and soft rutted sand. Let the tyres down to 20PSI just before the sandy stuff, and left the trailer at its usual 25. The scenery is quite special there, rapidly changing from stubby salt brush to tall rainforest and back again in a moment. When we arrived at the beach the tide was still a bit too high to cruise on the beach, and the plan was to go north to coonar creek. Following the winding track behind the dunes was slow going, but an interesting drive.
About half way to the creek we were able to hit the beach and cruise the rest of the way. Paddling up coonar creek is very nice, and the fishing is good, but i didn't have a rod with me this time. In my usual lazy fashion i took no photos, so go have a look for yourselves if you can, its well worth it.
I was a tad rushed packing the car and half way through cooking lunch, the gas canister ran out. I use a cheap buntings butane cooker and didn't have a spare bottle. Instead of raw sausages there was a aerogaurd can in the back, its exactly the same size and shape as a butane canister and it worked really well in the cooker. I do not recomend it and dont plan to try it again, but it cooked a lot faster than the regular can.
After lunch it was time to head home, the tide was down and the beach was wide. And covered with kids playing right in the middle of the vehicle tracks. Kids with no concept that there was cars driving there. The beach was chopped up and steering was a difficult to say the least, so it was a bit of a mission sometimes to go slow enough to steer and fast enough not to bog down.
About half way back to the beach exit, the car started to bog down, then the front end started to clunk and jump around. It felt like the gearbox was about to explode or something, then there was a very loud bang and a massive cloud of smoke out from under the bonnet. Turned out this happened. 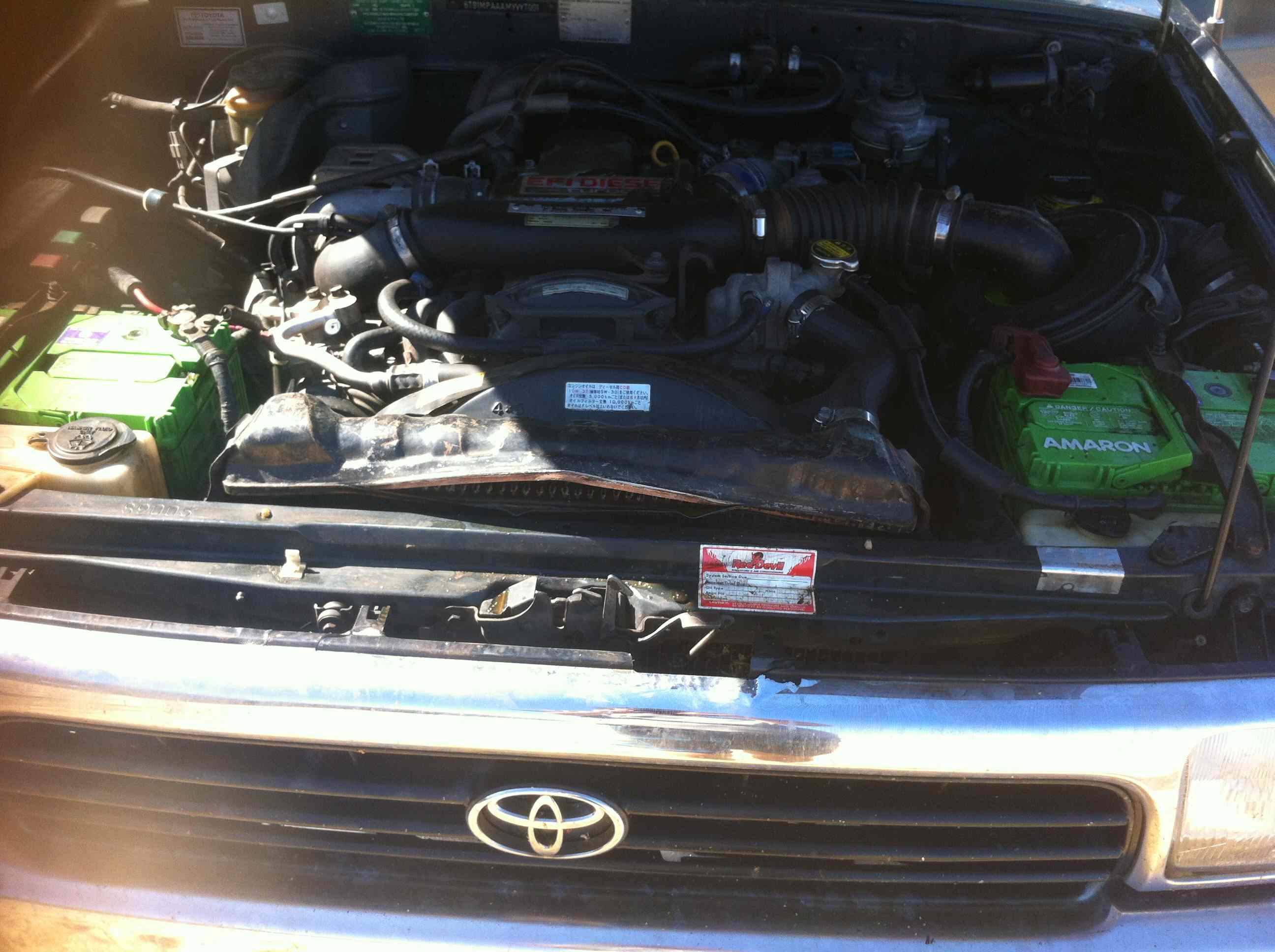 At least there was no doubt about what the problem was.
Fortunately i have a friend with a hilux that lives at woodgate, so in about half an hour he was there to tow us out. In that time about 5 different people offered help and one showed us where he was camped and gave us his CB channel in case the mate didn't show.
After that it was a jolly fun ride, an LN106 diesel hilux towing a surf towing a trailer through soft sand and deep ruts and all the rest. The brakes and steering in this thing were so heavy that every bump threw me across the cabin.

All in all it was an interesting day. 3 of my 4 passengers had never been off road before and they had a blast (as did the car). Nobody was badly hurt, and i believe the car is ok once the new radiator arrives, and the various bruises to fingers, arms and shoulders are just starting to heal.