Only problem is, the lack of a actual GPS chip on the ipod means tracking and/or location fixes wont be very reliable once outside of a WIFI internet signal (iPods use WIFI signals for location services and not actual GPS satellites - so it wont work too well in the bush, if at all - but you can still view the maps)

I've got mud maps which I think is quite good, but I also run a garmin GPS which I've put some aftermarket maps onto and it's really worth the money I paid for it now. Also the mud maps you can download extra maps to 4wding and extra detail for specific areas 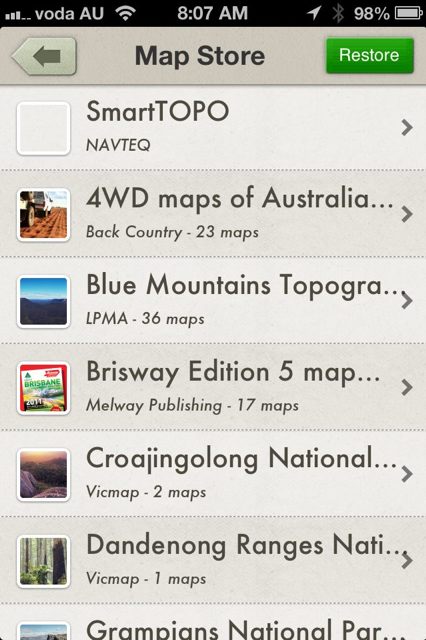 Hey dchaniel, how much did you pay for mud maps???
Josh
F

Sorry mate any chance of some pics at all as well???
D

I sorry, I think I payed $20 for the topo map subscription but the extra maps range from $40-$150. It also has satellite & road maps. And other handy bits. I downloaded the free version then added on the topo etc. 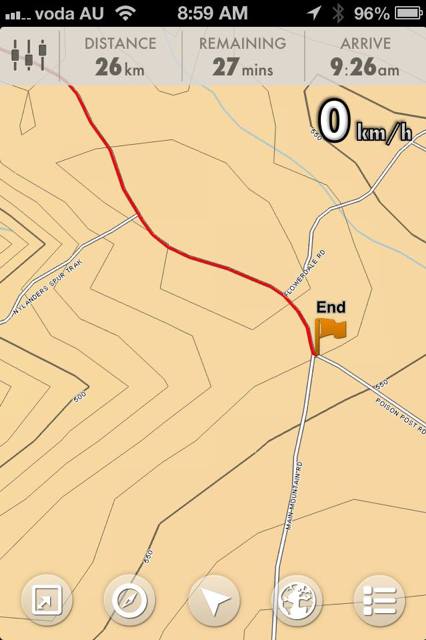 For those that have the non 3g / non GPS models, you can buy the Bad Elf GPS receiver so no need to tether it

Great idea those things from the sounds of it, but if you already have a iphone you can do the same thing for around $1 by using a app instead (they have apps specifically for gps tethering)

I've got Memory Maps and MotionX but I haven't used them on a track yet, bout to upload a track to it now and have another play with it
M

I'm about to try out motionx tomorrow

A mate just used Mud Maps on an ipad (using a separate gps receiver as his ipad has no gps) to do a 2 month trip out towards the Center, then up to the Cape, then back via Fraser Island, and all the way he was giving details to the mate using a Hema, as the Mud Maps setup my mate was using was giving much more detail.
He's been using it now for quite some time and swears by it. Enough so that he has me convinced, and I've finally decided to bite the bullet and get a similar setup (except for iPad mini and one WITH a gps built in).
He has the TOPO maps on his.

He also converted a simple perspex clipboard, into an iPad holder by screwing some supports and an old windscreen suction mount to it. It held up against even the most corrugated roads
B

Doesn't the guy with the Hema know how to use a GPS? It doesn't seem to make sense that the Hema didn't have enough detail out there all the time.

Hema would be the best overall set of maps for the outback by a country mile for non specialised touring. They even check the maps tracks with a GPS.

This has to go down as a mate of a mate story, literally. I would check the facts before making a buying decision.
Last edited: Aug 14, 2013

boobook said:
Doesn't the guy with the Hema know how to use a GPS? It doesn't seem to make sense that the Hema didn't have enough detail out there all the time.

Hema would be the best overall set of maps for the outback by a country mile for non specialised touring. They even check the maps tracks with a GPS.

This has to go down as a mate of a mate story, literally. I would check the facts before making a buying decision.
Click to expand...

Hema doesnt have enough detail all the time - The vast majority of Australia is only covered by 250k series maps included with their app on a idevice - with only select areas offering maps at a scale which are useful for bush tracks.

I dont doubt Ezookiels story at all - Infact the scale is so bad for a standard install of hema around my area that its actually completely unuseable for anything except highway travel, and shows literally no bush tracks which I use regularly - good for road use only for the majority of australia apart from "4x4 hotspots" Ive found using it personally

My mate only got back on the weekend so it's very fresh in his mind, and he had two months travelling with this group. They did out to the center and then up to the Cape, and home via Fraser Island. He had plenty of opportunity to compare the two side by side. I don't doubt his assessment. I also know he doesn't bag something out for the heck of it.
You must log in or register to reply here.
Share:
Facebook Twitter Reddit Pinterest Tumblr WhatsApp Email Share Link
Top