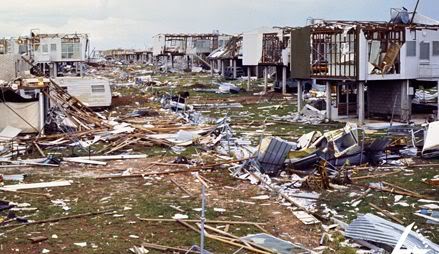 The hurricane devastated the area causing approximately $30 worth ofdamage.
Three areas of historic burnt out cars were disturbed. Many locals werewoken well before their Centrelink cheques arrived.

The Moe Times reported that hundreds of residents were confused andbewildered and were still trying to come to terms with the fact thatsomething interesting had happened in Moe.

One resident - Tracy Maree Sharon Britney Madonna Smith, a 15-year-oldmother of 3 said 'It was such a shock, my little Chardonnay-Mercedes came running into my bedroom crying.My youngest two Skye and River slept through it all.'

Apparently, looting, muggings and car crime were unaffected and carried on as normal. The Australian Red Cross has so far managed to ship 4,000 crates of Bacardi-Breezers to the area to help the stricken locals.

Rescue workers are still searching through the rubble and have found large quantities of personal belongings, including lots of Health Care Cards, Jewelry from Kmart, and Bone China from Big W.

HOW CAN YOU HELP?

This appeal is to raise money for food and clothing parcels for thoseunfortunate enough to be caught up in this disaster.Clothing is most sought after - items most needed include: flannelette shirts, tight blue jeans or spandex, singlets (blue & white) white sport socks, Ugg boots and any other items usually sold in Priceline or The Reject Shop.

Food parcels may be harder to come by, but are needed all the same.

Hahaha, good one Sambartom. It's all true too!!!! Except you forgot about the OMO packs that were blown out the front windows!!!!

Thanks for the good laugh there Sambartom