I'm sorry that is down right disgusting, and pathetic. For a few hundred more you can get a much better fridge....hint hint stainless and real door seals. Trust me the eclipse ain't worth anywhere near this money it's again truley disgusting and a sign of the times, I remember what made the eclipse so good, was it's very affordable price for something that seemed to rival the Engel metal units, yet now the plastic thing is much closer to the metal units. Engel realized they were given these units away.
Funny, who wants some chessy juvenile words like "MTV music awards dude!!!" On the side of their fridge??????

If you ask me Engel and Waeco have become soo overpriced due to becoming much more mainstream.

I will never and I mean never buy another Engel or "popular" fridge again.

Just like people have to have the latest pair of Nike's or an Iphone 11 when there are plenty of lower/midrange options that do just as good a job.

I'm not a fan of Engel, but I do see a lot of fridges that are expensive from relatively big brands that are simply rebranded chinese no names. The models come and go every 12 months and a fridge repair's advice will be to take it to the tip.

Whatever fridge you buy, it should have a Danfoss compressor and control board IMHO, everyone including the owner can fix them with readily available parts at any fridge mechanic in Australia.
L

Saw this video about a week ago - perhaps confirms some fridges are made in the same factory, just rebranded and significant price/warranty differences.

The video has been disabled by the owner (whatever that means), so suggest searching YouTube: Bushman 85L & Kings 85L Upright Fridge Comparison

I have the 85l Kings upright in my cruiser
My wife loves it more than me, the second love in her life is the Evacool 40 litre fridge drawer
She talks to them every day and touches them caressingly I am going to get a Kings shirt to see if I can get a bit of that action too
The combination of these two has transformed our refrigeration usage
It is so much better than conventional style fridge

We have a draw fridge in n that e van, bloody awesome I reckon, personally I couldn’t care less what something like a fridge cost because it’s a long term investment and performance is remembered long after the price is forgotten

I had one of the Waeco CFX 40's for a few years. Suffice it to say that I'll never purchase another Waeco product.

My 32 litre Engel now sits in the garage, still works well, but now fitted a Kings draw fridge in the back of the Jeep and we use it all the time and seems to take up less room…

I had to check twice to make sure but true to form bru wasn’t asking for opinions
you’ve given some great advice though gents.
has anyone here double stacked their drawers? Kings or evakool?

Krumpy said:
you’ve given some great advice though gents.
has anyone here double stacked their drawers? Kings or evakool?
Click to expand...

Krumpy said:
I had to check twice to make sure but true to form bru wasn’t asking for opinions
you’ve given some great advice though gents.
has anyone here double stacked their drawers? Kings or evakool?
Click to expand...

The manufacturer of my camper, double stacks EvaKools in one of their models.
S

I have an old Engle 45 later fridge freezer....., it's been all over WA many, many times and still works like a charm but It's now a bit small for my needs so I've been looking around for a 60 or 70+ fridge/freezer..., comparing info on features and prices etc. Last week I aw a 2 door Dometic CFX3 94 on sale at BCF for $1649 and was thinking about it(weighing it up) when I was just actually gifted a deep old Waeco. I says on the side it's a CF 50 but it's actually has the capacity of 59 litres. Anyway it's one big space and just too deep..., I'd prefer a longer flatter job. I'll also probable end up having to make(copy) or buy a 'drop down slider' unit to fit whatever fridge/freezer I buy, onto the tray back.
The 'gifted' Waeco works on 12/24 volt, but not when plugged into 240 volt. Anyway, I've sent it off to local reputable refrigeration place...., hopefully they can fix it relatively cheaply. As it's single space and too deep I'll probably sell or gift it off to someone else and buy a longer body job.
But the problem remains..., what is a reliable 2 zone fridge/freezer to buy..., around 70+ total laters..., one that will handle rough tracks etc ?
B

Sandyfreckle said:
But the problem remains..., what is a reliable 2 zone fridge/freezer to buy..., around 70+ total laters..., one that will handle rough tracks etc ?
Click to expand...

You may not like the price, but it fits the bill better than any other IMHO. 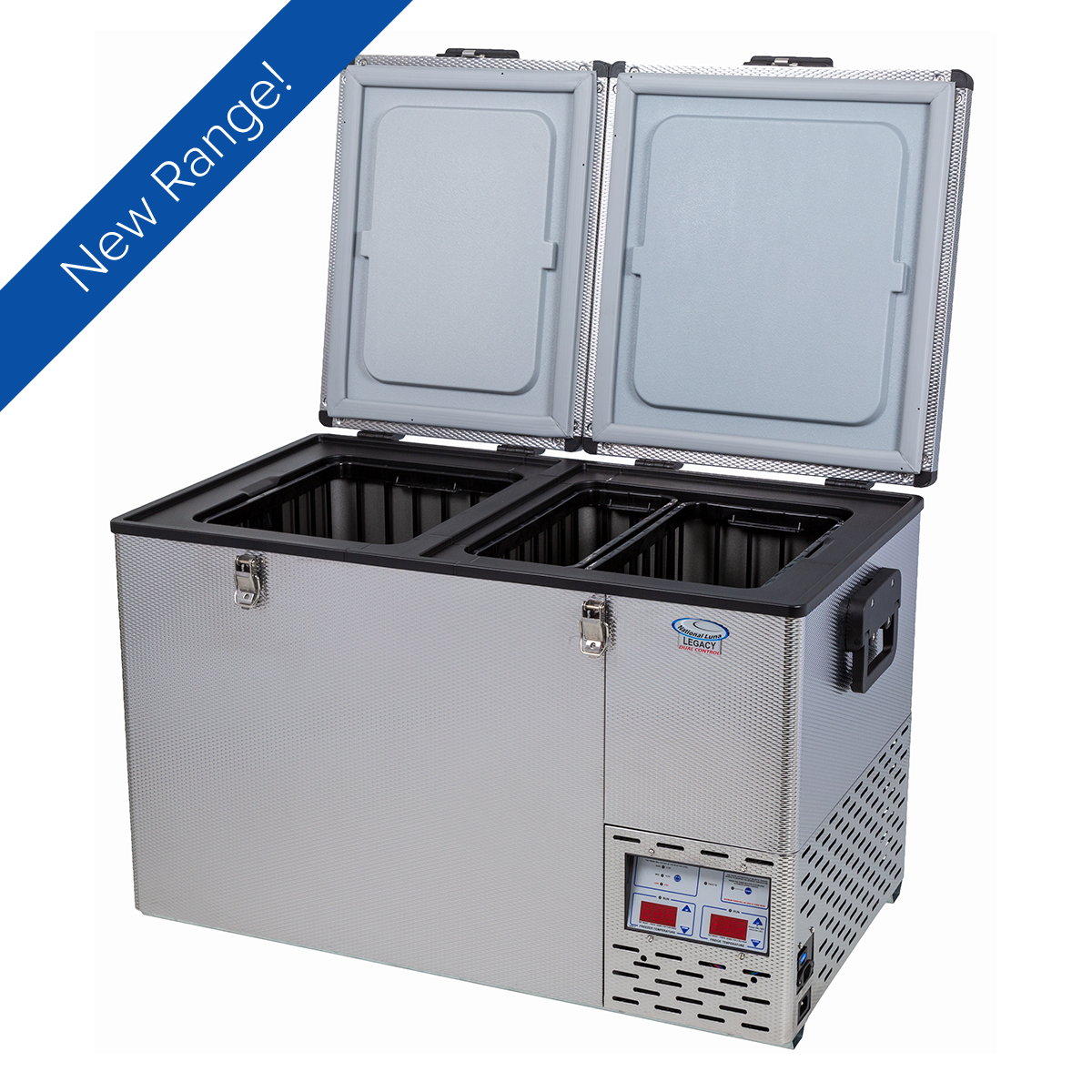 boobook said:
You may not like the price, but it fits the bill better than any other IMHO.

Given how long a decent fridge lasts I don’t see the extra $1k as being too expensive. They do look a cut above anything else in the market.

I’ve made my bed with the 2 evakool dual zones that I have and I am very happy. Being RF series they can easily throw a whole new engine compartment on either for around $1k if either ever decides to play up. No sign of that yet though and the older one is 15 yo now.

I looked at Aldi last week, 599?? for a ?L [can't remember] but it was bigger than Ben Hurr but smaller than the Great Pyramid of Cheops. One of those times ye say yeah, no, then wish you could go back and buy it just for the hell of trying it at that price, the lack of specs on the outer carton was one off putting draw back?
P

Petunia said:
it was bigger than Ben Hurr but smaller than the Great Pyramid of Cheops.
Click to expand...

Ah yeah, that narrows it down!
S