The tool box is salvageable

This sums up bean counters, perfectly. 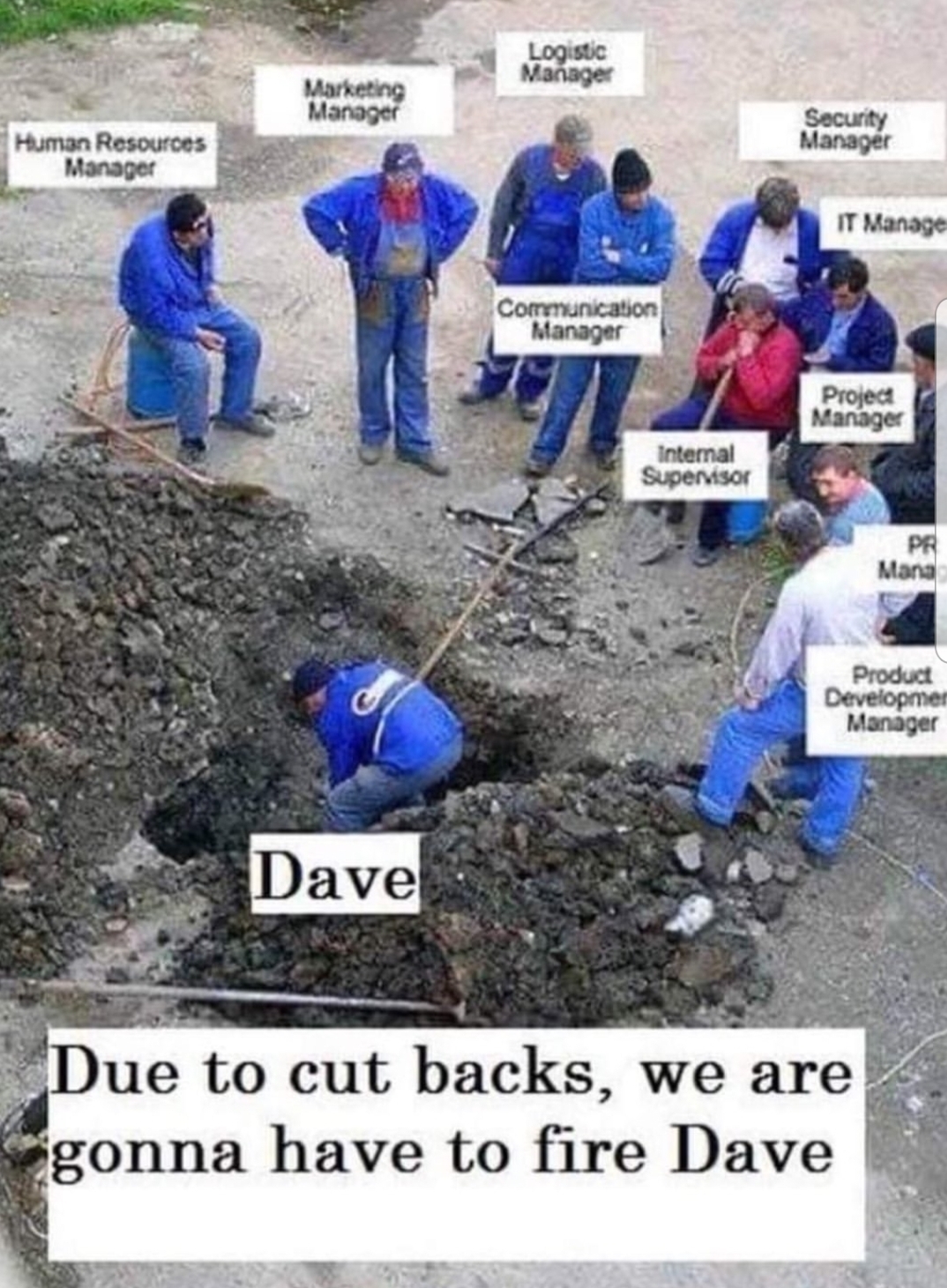 This is whats screwing this country.

This is whats screwing this country.
Click to expand...

An old builder I know who retired about 5 years ago said to me
In the old days you spend 10% of your time talking about the job and 90% doing it now it is the other way around.

From what I've heard there is a bit more to this story that hasn't been mentioned. Old mate parked his car next to the truck to fix it. Once repaired he called the control room in Perth to hand it back. They asked him to move the truck, probably to get it back into the "run" as its a robot truck. If its in the run they can control it and send it back into auto mode. Old mate wasn't passed out to operate the truck and mentioned this to the control room. They told him its OK, he can move it. I think in this process he was all caught up in having to move it without being trained and forgot where he parked the car. Its drummed into you to not operate something you are not passed out to do so I have no idea why the control room would tell him to move it.

Quite an amazing set of circumstances, but these days with 'Control room joy stick jockey's' usually more than 1200 kilometres away calling the shots, this is always possible and it's a very similar scenario with the BHP runaway ore train.

This squashed ute is petty cash in Dollars terms to the runaway train, but in true Monty Python fashion these so called big miners just get up, brush off whatever crap is on them sack a few people then continue unimpeded until it all happens again.

Back in the 1980's and 90's the Iron Ore mining industry battled the much maligned Union organizations, the unions and mining the companies were dead set pricks at the best of times, there were always petty grievances and grubby tactics on both sides and if the Union hierarchy could convince the majority membership their/our demands were not met, it was on for young and old though not all skirmishes were for higher pay either, some were on behalf of employees who did a specific task or job, because there were moves at the time to have untrained person(s) or scabs ready to do the job, just because it would be quicker, getting a machine back on the 'go line' NOW and not having to wait for an specialist test driver or plant operator to come and move the machine, once the machine was handed back to production it was smarter to get the hell out of that area, it's far safer.

I was told about this site (4x4earth.com) by a bloke I've known for 50 years or so. We worked together, lived within cooee of each other and had some monumental 4 x 4 experiences back in the 70s. And low behold, he's Joe Fury!!
Great to see him sharing his knowledge and experiences with the world. He certainly knows what he's talking about.
Cheers and stay safe.

Thanks. Stay safe. (I would say "safe travels" but Joe says that
B

Since when do Pajeros run over Toyotas?

G'day Adventurers
Just a rapid fire post but still on the lines of Autonomous Dump trucks and all things dumb arsed in the 'glory world' of iron ore mining in the Pilbara.

Rio Tinto has had another 'autonomous' truck incident in the Pilbara at the Yandicoogina iron ore mine, where a unmanned haul truck caught fire and was completely destroyed, my guess these radio controlled trucks don't have smoke detectors in or on them, maybe the 'fat controller' in Perth was too far away to smell the smoke. Rio have tried to keep this incident quiet, but they got hit for 6 via social media, reports and images. 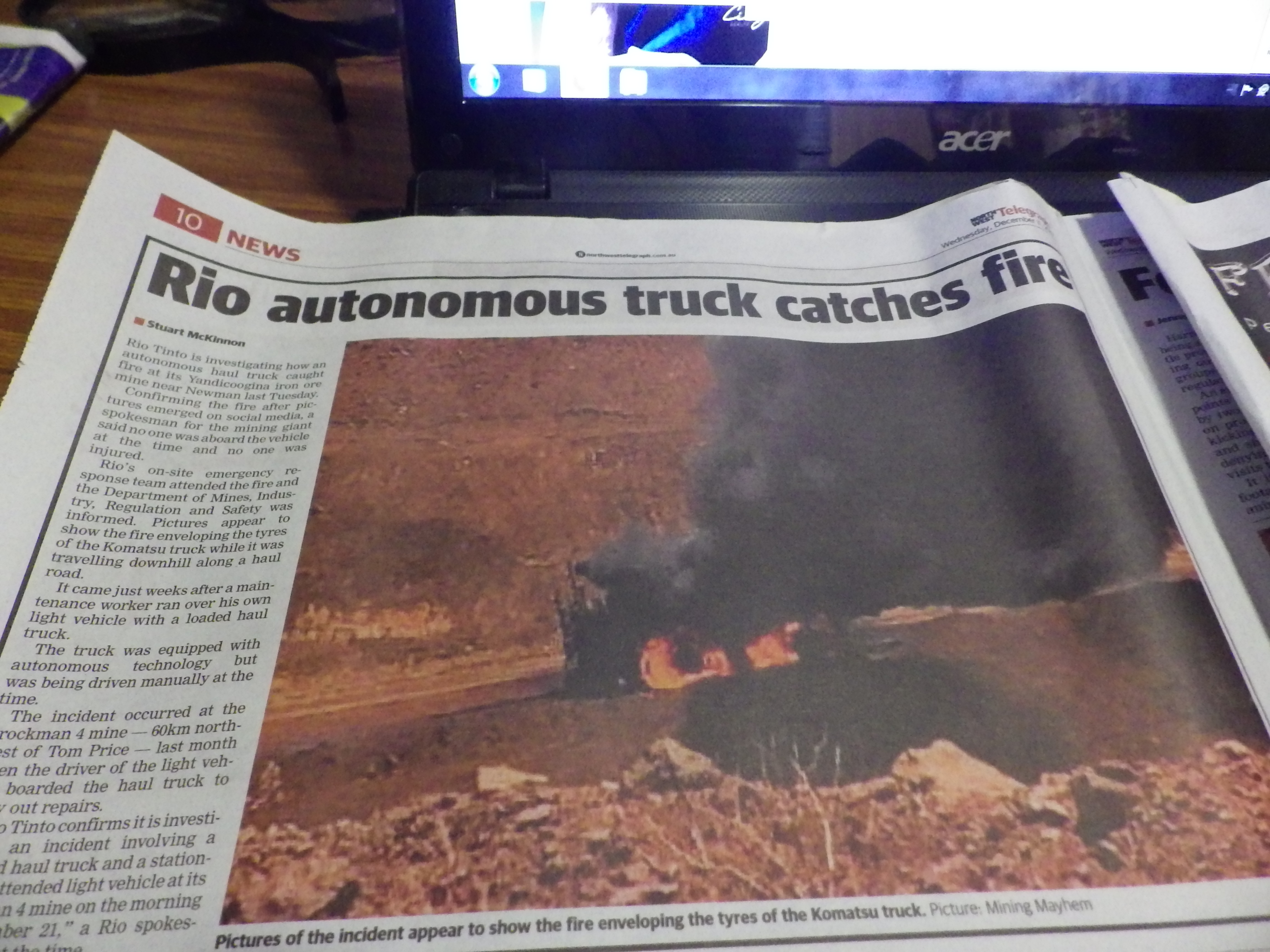 Joe Fury said:
G'day Adventurers
Just a rapid fire post but still on the lines of Autonomous Dump trucks and all things dumb arsed in the 'glory world' of iron ore mining in the Pilbara.

Rio Tinto has had another 'autonomous' truck incident in the Pilbara at the Yandicoogina iron ore mine, where a unmanned haul truck caught fire and was completely destroyed, my guess these radio controlled trucks don't have smoke detectors in or on them, maybe the 'fat controller' in Perth was too far away to smell the smoke. Rio have tried to keep this incident quiet, but they got hit for 6 via social media, reports and images.
View attachment 65103
Safe travels : Joe Fury
Click to expand...

Haha, there will be a few toasting the toasted.

R2D2 smoking? Bad for you mate!

These sorts of things happen way too often. There was a case last year at a Queensland coal mine (which I am not allowed to name) where haul truck drivers were doing a hot seat swap with the truck still on the circuit.

New driver does all the right things (pos comms, etc), parks the ute up in sight of the outgoing driver. Hops out, swaps over with the outgoing driver, starts the truck up and...
Drives right over the ute he had just parked up and which was in his visual area.

Luckily, the outgoing driver had, for some reason decided to watch the haul truck drive off instead of getting into the ute, but it does go to show just how lacking these blokes can be in situational awareness.
E

Oh, this is a cool meme and the situation is quite common, when one works, and the others do nothing. And about the employee on the cart, I don't see anything wrong with that, the person just wanted to have fun. On the one hand, this can be considered an irresponsible approach to work, but on the other hand it is funny . I personally would have been fired for this at my workplace, because my employer has very strict conditions and despite the high salary there are large fines, I don't know if you guessed it or not - but I have been working as a truck driver for more than 3 years. I'm glad I got into this area and that I'm not sitting in a stuffy office. I am constantly moving, learning a lot of new things, developing in the field of driving. I drive Class A trucks and it's a little easier and even though the wage difference is only about $ 6,000 a year so it's not that hard. It is expected that soon there will be about 330000 more jobs on US roads for truck drivers. So, the need for this vacancy is increasing and increasing more and more. In general, there is a lot of information on the click here website. By the way this site told me a lot of interesting things and this site inspired me to create my own small transportation company and at the moment it is developing But this is still a secret if you are interested you can read more about it here
Last edited: Jan 13, 2021

Word has it BHP is still killing one a month.
I was lucky my time in the Pilbarra was at the gas plants.

Toyasaurus said:
Word has it BHP is still killing one a month.
I was lucky my time in the Pilbarra was at the gas plants.
Click to expand...

No company can protect stupidity. Alot of work places accidents can or would have been avoided (my opinion only) if people would take more responsibility for there OWN actions.
Yeah I know of alot this "red tape" is rubbish, but alot an't either.

hiluxdriver said:
Since when do Pajeros run over Toyotas?
Click to expand...