"DESIGN" Something To Think About ?

I've lifted this from another forum to share, l think it's a poor design problem and something others may want to
consider if looking to purchase something of a similar design.
Quote''
A chap at Hughenden who has been there for 3 weeks waiting to get his van fixed.
The van was only 3 weeks old when the front of the A frame broke of (pictures) safety chains did nothing as they
were attached to the bit that broke off.
Yes the van frame is alloy, this puts a question mark over using alloy.
The van has only traveled from Brisbane nearly to Richmond on the black stuff.
A temporary hitch was made at Richmond so the van could be towed back the Hughenden for repairs,
he said that they first sent out a tilt tray but the van is bigger than the tilt tray. Wrong ! they had to back and bring out a low loader
The van manufacture is paying for the camp site and for the repairs the delay has been just what is the best way to fix, it goes in next week. 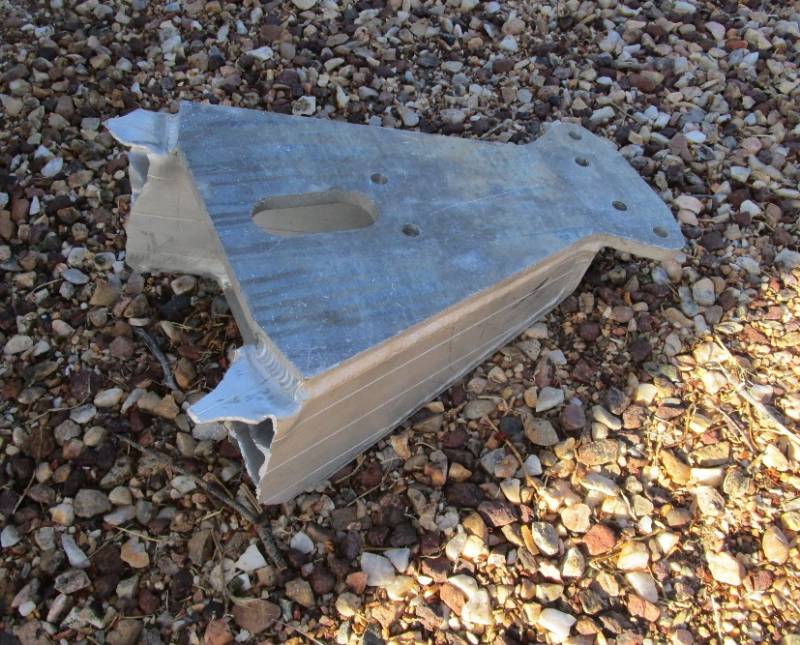 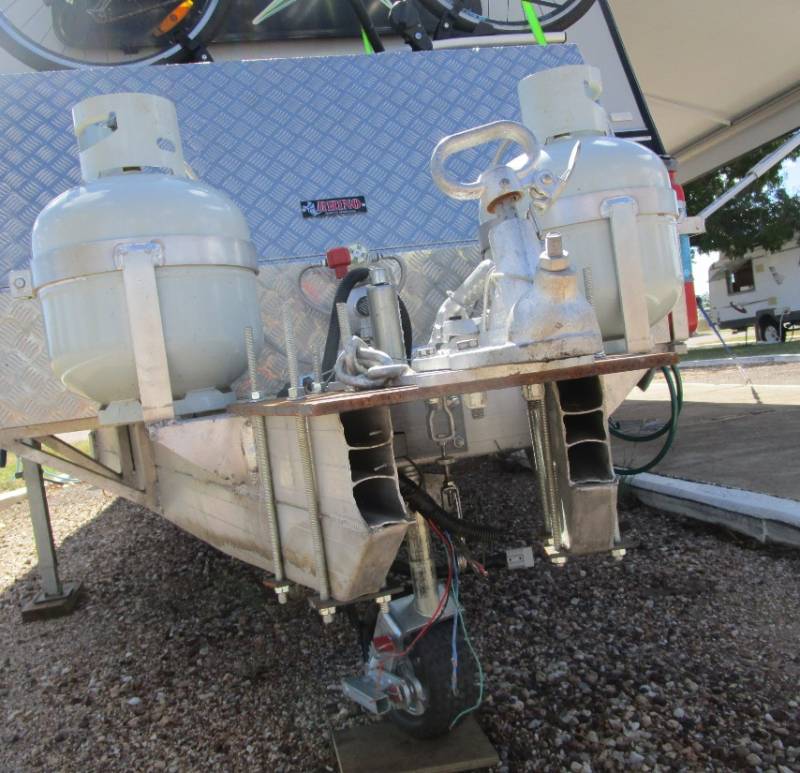 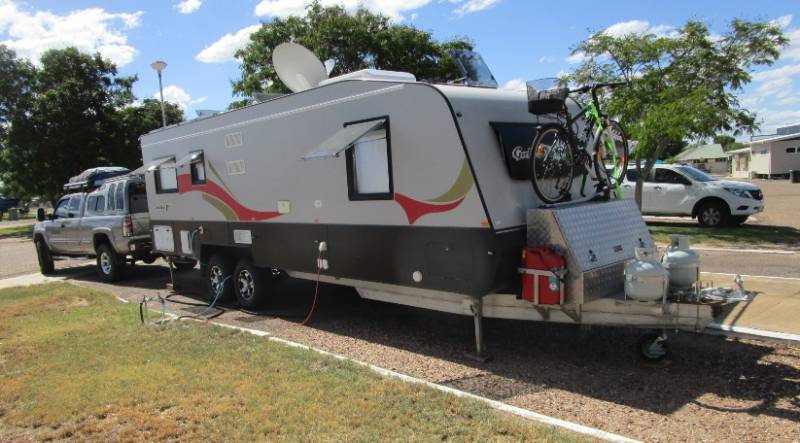 WDH being used on a van that size i assume... Wonder where that attached and if that was built into the structural design
C

A WDH may or may not be needed, depends on weight distribution.
But there is a lot of weight on that A frame. Also that fracture lookalike a bit of flexing stress associated with the Aframe load.
Question would be as the frame designed for the load?

Just goes to show how important it is to buy tried and tested brands that have been around for a while and not base a purchase on price...
What brand van was it?

Not sure if it had a WDH, the axle set is placed far to rearward IMO and placed to much pressure and flex right behind the hitch plate at the weakest structural point.
Add a couple of full gas bottles 2 full jerrycans, bike and who knows what else in the front draw bar tool box.
Van plates.

The tow vehicle, this thing would definitely tow alright.. maybe a little to well. 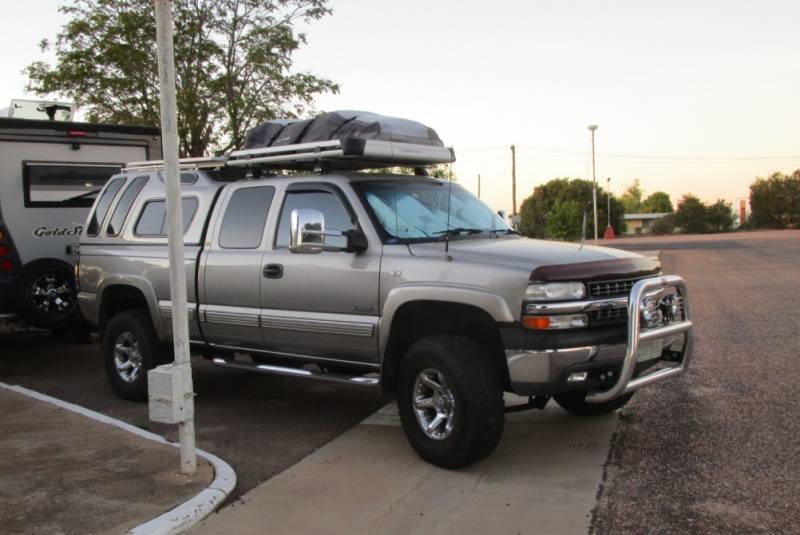 Not sure if the tow vehicle is correct.
Note the ATM is 3.8 tonne and GTM is 3.48 tonne.
So what is the rated tow ball load and actual toolbar load for a start not to mention rated tow load for the tow bar?
C

What occurred is a simple case of stress fracture due to flexing of the frame. Actually little do do with the tow vehicle but more to do with the actual A frame loadings.

From what I've read, tow ball weight is 10% of towing capacity.


cultana said:
What occurred is a simple case of stress fracture due to flexing of the frame. Actually little do do with the tow vehicle but more to do with the actual A frame loadings.
Click to expand...

Aluminium is not alloy and not all alloys are the same and welds near stress points ------- Probably poor design.

dno67 said:
From what I've read, tow ball weight is 10% of towing capacity.

Took me a while to figure out "TIC" but yes you are correct.
Some take life a little too serious IMO.

Owch, that'd ruin your holiday. Ally is fantastic, but I'm still dubious about using it in applications where vibration and continuous flex is a problem. That, and like its been pointed out, its not something anyone with a welder can repair in emergencies

The boat trailers built around here for weights approaching the numbers on that compliance plate have member sizes at least triple in section of what that van had. Lucky it didn't kill someone. I wonder if the loadings were within spec.

cultana said:
What occurred is a simple case of stress fracture due to flexing of the frame. Actually little do do with the tow vehicle but more to do with the actual A frame loadings.
Click to expand...

There was some discussion a few years ago in the UK where caravans were getting damaged by being towed by the tilt trays as the rear suspension was then fatiguing the chassis and damaging them - they needed a damper fitting on the truck to soften the load.

Hate to say it but there are many brands of Caravans that are to be avoided at all costs and most others its also a case of buyer beware. There is plenty on various forums and on Facebook and recently a person has been on TV about poor manufacturing in the Caravan industry. Moderators, I am not saying this brand is a dud but people need to do a lot of homework BEFORE they buy. And in the Caravan industry that means 2nd hand as well, as most people who discovour they bought a lemon, sell them as soon as they can. Good brands are harder to buy 2nd hand as people hold onto them. It has taken me over 18 months to decide which caravan I bought. I am happy to share my thoughts if people what to PM me.
You must log in or register to reply here.
Share:
Facebook Twitter Reddit Pinterest Tumblr WhatsApp Email Share Link
Top