Okay, Anzac weekend this year Sschmez (Steve) and I took our finely tuned, lean and fit temples (and our Mt. bikes) on a second attempt to locate the head of the Murray River.

We made it to the intersection of the Cobberas Trail and McFarlanes track on the Thursday where we were to begin this epic journey of monumental proportions (leave my temple out of this). Quite a few too many cans of riding skills later, a late dinner and late to bed saw the perfect preparation for our ride the next day.

Come Friday morning we were up at Sparrow's raring to go. Quite a while later we were finally ready and actually embarked. 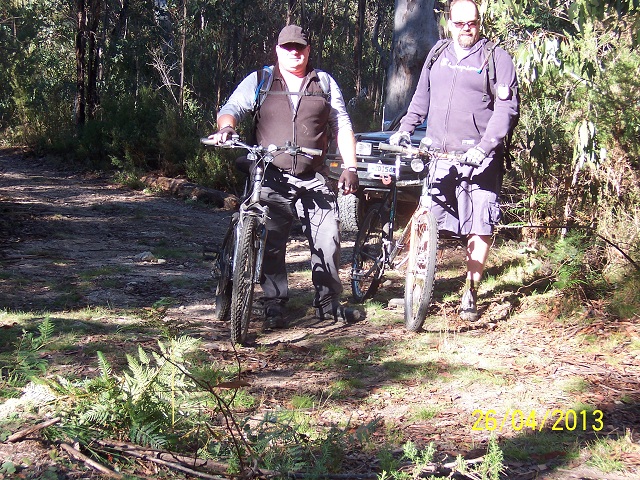 Across the creek we came to the first of our obstacles - a hill. In the high country, would you believe it? At the end of a long and arduous climb we got to the top...........and found another hill (also going up). This seemed to set the scene for the morning and I was really wondering how many up hills there could be. Turns out, quite a lot.

We were really questioning a lot of things by this time - how clever was it to drink too many cans of riding skills the night before, how clever it was for two fat blokes to think they could still bush walk and Mt. bike like when they were kids and one of particular concern, what are those big birds doing circling over our heads?

So after about 7km's of cliff climbing (I swear they were that steep) and wondering why we even brought the bikes, we surprisingly reached Cowombat Flat. I can't remember any downhill runs out of that part of the trip but Steve assures me there were some. I do remember getting my foot caught in some branches and coming to an abrupt halt at one stage causing an unexpected exit stage left into the trees so we must have been able to ride for a bit.

And here we are at the wreckage of the DC3 on C. Flat. 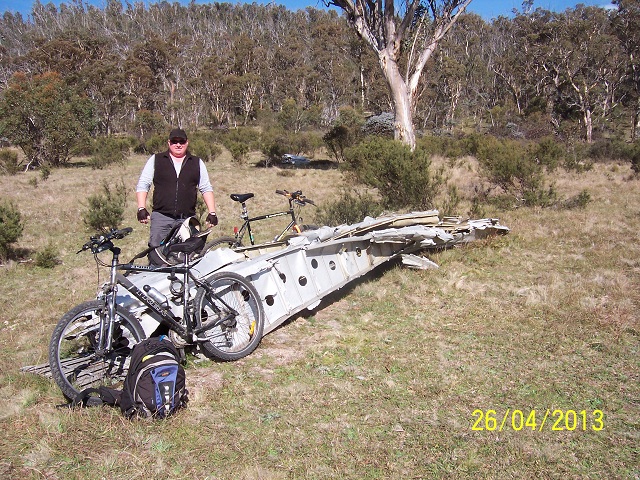 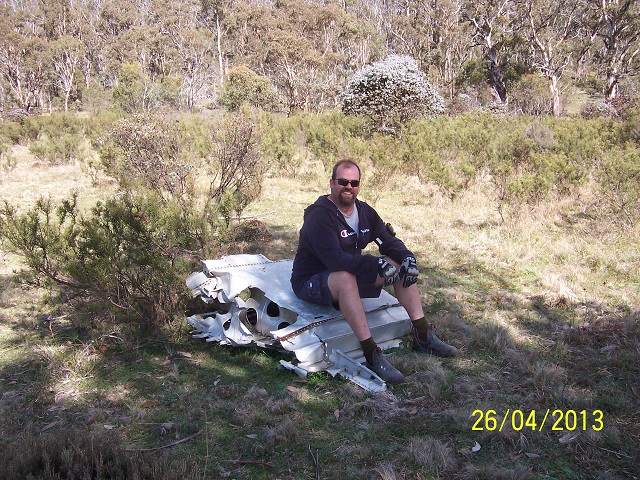 So, a poke around the wreckage (not much left) a look at the brumby trap (not set at this stage) a good ride around the whole area and then we rode across the Murray. Then we went back and took some photo's of old man Murray as he is at this point in the world. 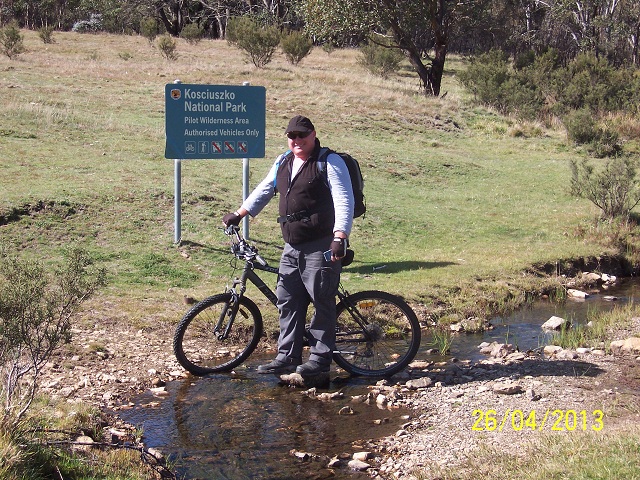 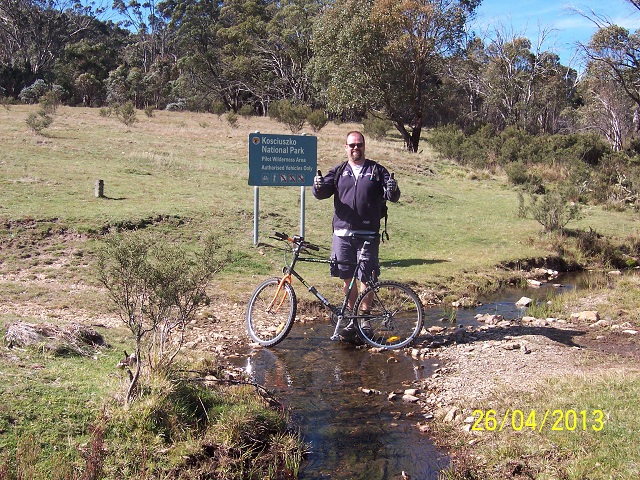 We then ditched the bikes and went for a walk upstream where the river gets even smaller. 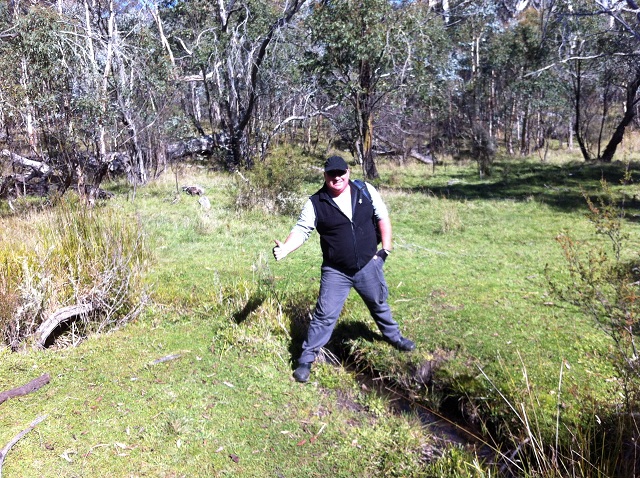 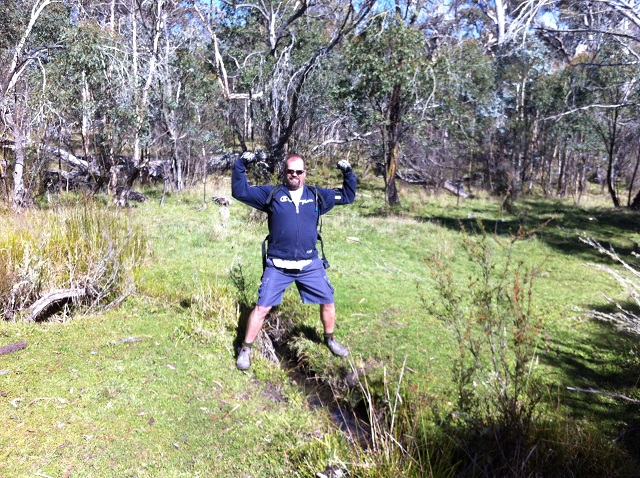 Yes, that's the Murray trickling through the meadow as us mighty explorers majestically straddle it.

So, now it was upstream for a while and disturb a family of three brumbies minding there own business only about 15 feet from where we were walking. They then decided we needed the space more than them and took off for the hills. What a fantastic sight! Sorry, no photo's, they're camera shy.

After some further minor adventures (and due to the time - it was nearly beer o'clock) we decided we'd achieved enough for this trip and this day and saved the actual head of the Murray and the (slightly different) point where it meets the Black-Allen line (the straight bit of the Vic/NSW border) for another trip. I'm sure our long suffering wives will believe us when we tell them we have to go back.

Now it was walk back to the bikes, have a late lunch and ride back to camp. Surprising how much faster you can travel downhill when you're riding the deadly treadly. Beer o'clock came sooner than we thought (obviously it's never too soon though).

Good weekend all told and one goal reached. Well worth the effort and reminded me of what it's like to go hiking and just feel the bush around you - I could nearly go out and hug a tree - nah, too cold! I'm over it now!

Hope you enjoyed the read - will update next time we have another go. And we will!
Last edited: May 4, 2013

Great stuff....shame you can't still drive in like the good old day....

Brilliant Darren, such a wordsmith
Dunno how you made it sound so easy

That was great Darren - there weren't any photo's of the camp site or Cocktail hour though, were you all to busy? - seriously though, great report.

LMAO The Grampians was much more sedate, cheers

Yeah recognise that as where we stradled the Murray River when we walked throught there on the AAWT, what a great area.
Camped on Cowambat Flat, jeez it was cold.

LMAO Darren, and by the we all know what happened to Joks goatee now

Sounds too much like exercise for me though . But good to read that's for sure ( nice pics too )

Thanks for the replies.

Yes the goatee got a run for a while but I still didn't look like Jok so I shaved it off.

Back at camp was beer o'clock/fire/tea - photo o'clock was over by then!

Gotta say that it would've been easier to drive it but it was a nice change not to have
4WD's and dirtbikes hookin' past you every 20 minutes - actually got some serenity (lost it now though).

deep deep cover is the only thing i can say