Yeah , Its Full on and I'm Scared we all will Die Shortly

We should be more worried about what China is doing as to control the world & The Middle East Imploding , while everyone is on Facebook or Instawank

I fail to see what the money making con is - if anything its the oil/coal producers who are at risk of the biggest loss. Industry/business will still continue on as normal, there will just need to be a shift in the way energy is produced. Its not going to be the end of the economy as we know it.
From what I understand of the current science (I say "current" as science is constantly changing - unless your good enough to come up with theories like Einstein that constantly seem to be proven to be correct...) the production of green house gas emissions across the world from human sources has exceeded the environments natural ability to absorb them. The current CO2 levels in the atmosphere are over 400PPM which is the highest they have been in the last million years and have increased since the industrial ages at a rate far quicker than anything in the past. The global average temperatures are on an increasing trend, as well as the global average sea surface temperature

You want to know who's profiting, follow the money.
https://www.scientificamerican.com/article/dark-money-funds-climate-change-denial-effort/

I used to be doubtful, but the science is in that shows that 200 years of digging up ancient forests and turning them into gas is having an effect on the climate. Be careful not to confuse climate with weather, something that most deniers struggle with.

I never doubted climate does not change .
Same can't be said for fashion sense and dance moves 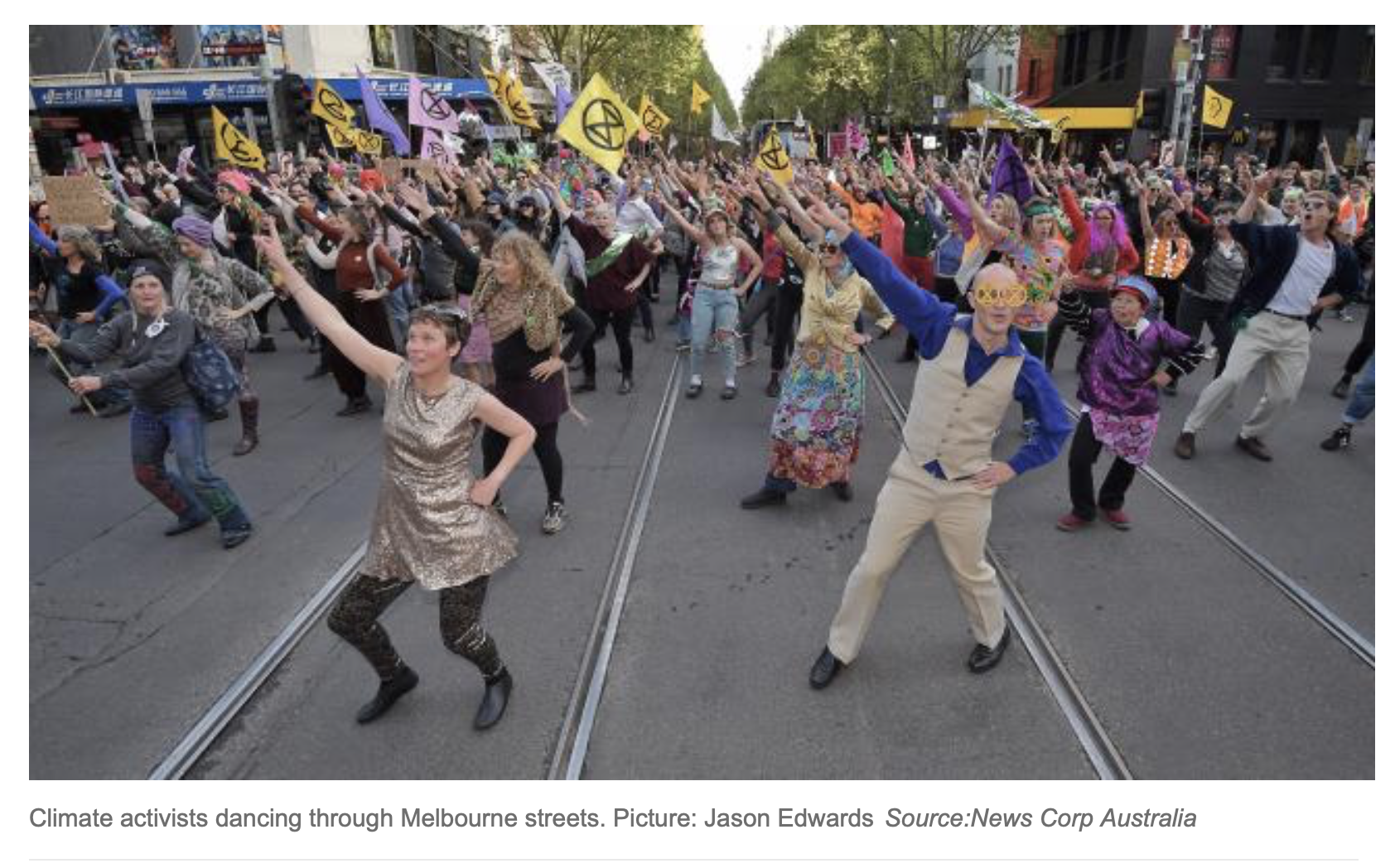 Id be more worried about a volcano or two erupting, spewing gases into the atmosphere, than the most of the cars in the world put together.

One read's two Billionare's are paying for Gretta's caper
Then there Ol Al making truck loads of coin on the circuit , if the reports are correct .
One has there beliefs & then there are the , UHhuh
Oh then there's David , made his name taking wild life & selling them as pets , then had a career change so they say

Trouble is that volcanoes do erupt and all the cars in the world add more to it.

CruiserAd said:
Id be more worried about a volcano or two erupting, spewing gases into the atmosphere, than the most of the cars in the world put together.
Click to expand...

Volcanic sources are really insignificant compared to human outputs. Theres been a few studies over the years and we produce 90-100 times more CO2 than volcanic sources. A big eruption may equal our own outputs, but that would only be the case for several hours, not all day everyday. A very large volcanic eruption can create a temporary cooling effect due to the ash and aerosols that are emmitted into the atmosphere.

There needs to be a reality check with some people.

- Australia does not matter in the scheme of things, nothing we do will make a difference apart from a placebo effect
- We do not have the technology currently to replace our current energy supply systems in place so like it or not they have to stay, the rest is just fantasy idealism until the technology improves
-None of the predictions of the “ experts” in the last 15 years have come to fruition. From that you have to conclude they either don’t know what they are talking about or they are scaremongering
-The ones who preach this stuff do not live by example
- Many of these climate records that are being broken were set pre industrial revolution days..........what caused these events if it wasn’t greenhouse gas?

Whilst I agree with saving the planet and all for a greener way of life I don’t agree with the brainwashing that is going on in schools scaring the daylights out of young children. I do not trust scientists and blindly accept their findings , whilst I do believe they think they are acting in our best interests history has shown us time and time again they get it wrong often.

The bottom line is that Australia with a total population of one city in Europe should by all means be responsible to and look after our land but we are not going to change the world. We are like the Lorde Howe island of Australia on the world stage

I don't want to get caught up in this too much, I love the outdoors, hate litter bugs. It is sensible to look after the planet in every way we can but let's be reasonable. The world needs to keep moving forward. Do green house gases contribute to global warming? Possibly. Has the world's climate been stable since the big bang? Apparently not. I actually heard something a couple of months ago called ACORN 1 and ACORN 2. It's something the Australian government has done to the weather records since they started to record them. I think they adjusted the Temps up a couple of degrees, which makes it look as though the average temp has risen over time. Apparently! Time for another stuby!

Spooner said:
I never doubted climate does not change .
Same can't be said for fashion sense and dance moves

I can see a great opportunity for co2 reduction.

With the amount of bullshit we are fed regarding global warming I wonder if anyone knows the truth
The dole bulging scumbags that are shutting Melbourne down every day this week are nothing but professional protestors and will never be taken seriously.
Then there is that fruit cake teenage girl who's parents should be ashamed of themselves .
Its a circus , I think its the greatest scam of this century and so far its social media driven .

The Paris agreement sees us giving charity to some of the biggest polluters & abusers of the planet while countries like the USA & China refuse to even acknowledge it let alone join in on it.

Your tax dollars at work

Until they wake up and let us use Nuclear power their just in delusion land the wind is worthless and dont get me started on the big battery con. When SA went zero emissions by accident people realised the unforseen problems and there's lots of them
M

You can't go nuclear. The plants don't last long enough, they take far too long to safely decommission, the waste is dangerous for thousands of years and the fuel is a scarce commodity. They would have to build untold amounts of nuclear reactors to replace the existing fossil fuel plants and will have great trouble positioning them in areas considered safe.enough. Current technology can't do it, there'd have to be a breakthrough somewhere to make it viable.

Climate change isn't the issue and is a red herring. It's just a symptom of the damage we're doing to the environment, turning the earth into a garbage dump through rampart consumerism. We're wasting all our resources due to greed and very few people give a rat's arse as long as the economy keeps turning. Keep the economy churning by printing money, feed the masses bullshit, buy governments and rake the money in. Society deserves everything it's going to get, the level of general stupidity is quite astounding. If there's a buck in it, they'll kill the last rhino for its horn and the last whale for a bottle of oil. They've already done it before.

Are we affecting the environment? Unequivocally yes. You can't live in a system without affecting the system, it's impossible. Everything you do changes your immediate environment and has a domino effect the further away you go. I'd like to move to another planet, this one is an insane asylum and trying to talk sense is a complete waste of time so I won't bother saying any more. "So long and thanks for all the fish"

The major problem the world is suffering from is over population. This is the simple truth and this is what is having multiple affects worldwide. I have said it before and I'll say it again the best that could happen is a worldwide pandemic that kills lots and kills quickly. And it must hit hard in the seriously over populated areas of Asia, Europe and the Middle East. Sounds bad, scarry, ominous, foreboding, all those things but as I see it, will be the only cure.
Anything this or future grubberments of this country do to limit/offset emissions will have zero effect on a worldwide scale. One thing we seriously need to do in this country is set a population limit and it is nowhere near the discussed 50 million. As I see it we have pretty much reached it and don't believe we should be going close to or past 30 million. We barely have enough water in our major cities for the current populations. Brisbane, as an example, is down to 62% capacity now. Through another 5 million people in and what then? The cost to construct new water infrastructure now would be in the high tens of billions and where do you put it?
So where do we go from here? I don't know. There is some value in alternative engeries but I don't think we have found the right ones ..... yet.

shanegtr said:
Volcanic sources are really insignificant compared to human outputs. Theres been a few studies over the years and we produce 90-100 times more CO2 than volcanic sources. A big eruption may equal our own outputs, but that would only be the case for several hours, not all day everyday. A very large volcanic eruption can create a temporary cooling effect due to the ash and aerosols that are emmitted into the atmosphere.
Click to expand...