With the circled measurements below, over exact 24hr period, is how much energy was consumed by my fridge. The watthours reading would be the same regardless of it being 12 or 24v , but with Ah (amp hours) would it change depending on the system voltage, in the same way the A amps (instant current) does ?

Trying to understand which term / measurement is better to use when communicating “consumption figures” to others (some of whom are on 24v , hell even 12v systems vary from 12 to 15v).

To my mind , watts and watthours / kilowatthours is a more accurate way to communicate energy consumption

Yes I’m bored. Several weeks before I can go camping. 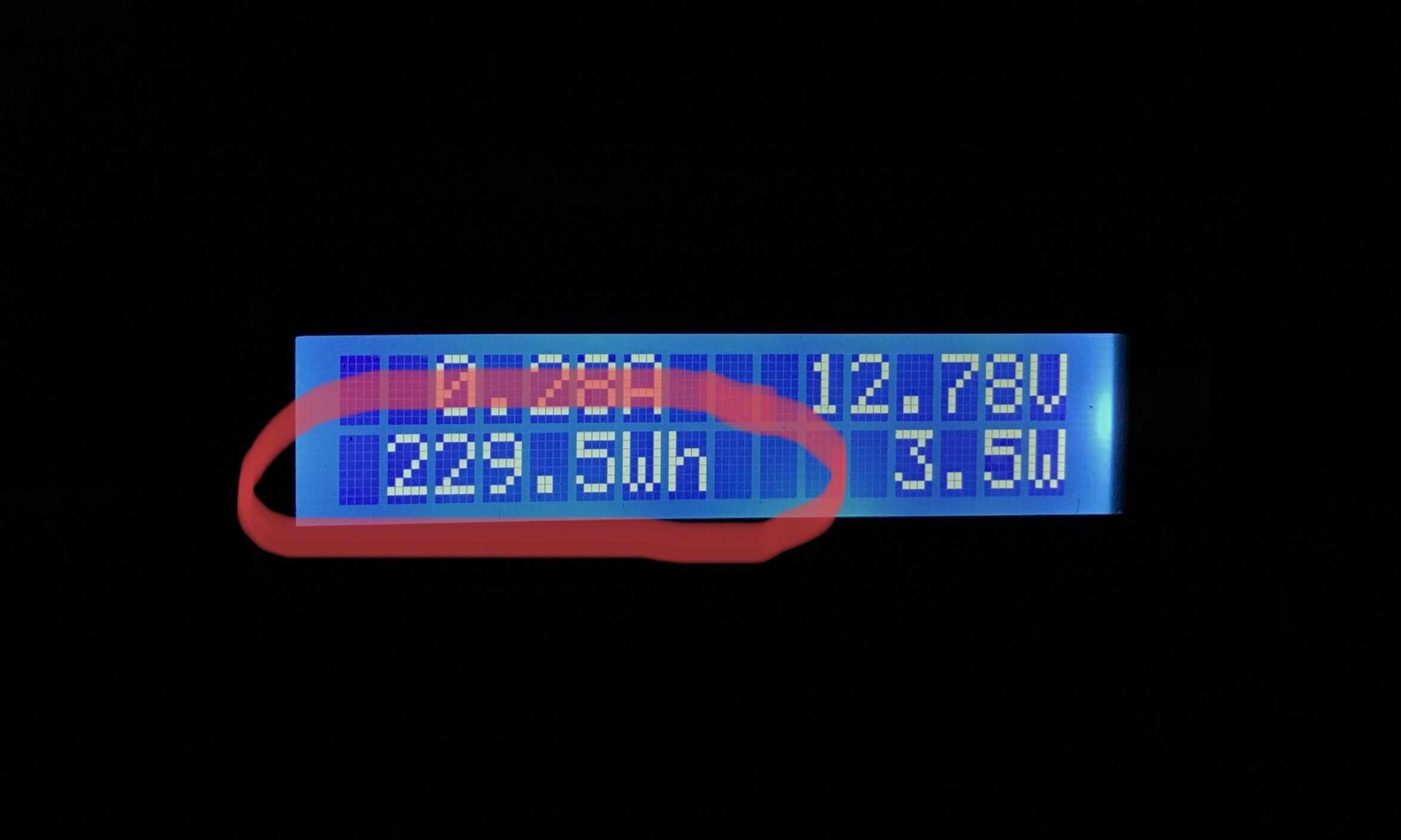 You can do your head in with all this especially if you don't think your fridge is running right....

Anyway just for those that dont know your fridge size and make might be worth stating this also...
D

Ha ha nah fridge is running fine , it’s just mid winter , boy has had operations and we’re city bound and wifey bought me an ammeter so felt like doing some bench marking for a new fridge.

Going to do tests in warmer weather when we’re actually opening lids a thousand times a day (kids ! )

darb said:
Ha ha nah fridge is running fine , it’s just mid winter , boy has had operations and we’re city bound and wifey bought me an ammeter so felt like doing some bench marking for a new fridge.

Going to do tests in warmer weather when we’re actually opening lids a thousand times a day (kids ! )
Click to expand...

You've just beaten me by a day or two... Mines suppose to be delivered Tom...
I wanted to test my Solar blanket and fridge...

What I was getting at is if you stated your make and model others can compare to your one as a reference that's all...

Swaggie said:
You've just beaten me by a day or two... Mines suppose to be delivered Tom...
I wanted to test my Solar blanket and fridge...

What I was getting at is if you stated your make and model others can compare to your one as a reference that's all...

Ahh sorry i see , yeah I’m not really meaning to do actual comparisons in this thread , just to seek whether Ah or Wh is the better expression to use (I measure other stuff too). Primarily trying to understand if Ah is contextually dependant on the voltage in order to be a useful reading.

Well you could use Joules.
regards
D

peterfermtech said:
Well you could use Joules.
regards
Click to expand...

The meter doesn’t have that as a reading?

Energy (joules) = Power/time = watts /second
Power(watts) = Voltage * Current = volts * amps
Amp Hours => the average amps used over an hour at a certain voltage - BUT you must specify the voltage
They are all ways of expressing the same thing so as long as you talk chickens with chickens then it doesn't matter.
regards
D

Use either, your choice. It really doesn't matter in recreational DC applications. In discussions about power for camping etc, most people will convert assuming a fixed 12 or 24 volts.

I use amps and amp hours because current (ie wiring and fusing) is a major aspect of the systems we use recreationally, most people understand them and typically we don't measure voltage over time (so we use that nominal 12/24 value). In a stable system, most of us are happy to monitor SOC in volts and equate that to the amps available.

When I was designing and building circuitry using "micro" power, precise values mattered but fridges and LEDs don't need precise values, they need sufficient power to chug along without falling over.
D

Yeah cheers. I just wasn’t sure if the varying voltages will affect the accuracy of using amphours or even instant readings for amps as a way of expressing to others about energy consumption

For example (instant current) 3.2amps at 15v (absorption charge active ) versus 4amps at 12.1v (no charging active, battery down a little and under load).

So there’s quite a possible variance in what’s expressed if just loosely saying “x amps at 12 volts - just because it’s a 12v “system”
Whereas watts doesn’t have that variability ?

Geez Darb, You like to open cans of worms when bored.

You are right. The real benchmark of what it takes to compare fridges from the ones above is W Hour which is a unit of energy. Like you get billed for a kW hour on your electricity bill. That is valid, not only for 24v, but you could even compare that to a gas fridge or a pedal power fridge.

Amp hour is a short cut people use on the assumption that the system is all 12v. What they don't say or generally know is they are referring to the charge consumed over a period when they say AH.

Amp Hours are really misunderstood and have nothing to do with elapsed time. You can have 1 AH over 1 hour, over 24 hours or even over a few seconds. A starter for a big diesel will also use about 1 AH on a cold day.

When we talk about AH for fridge consumption, Amp Hours is meaningless unless you also add a time and like you did in your OP. And even then for like voltages.

Eg 24AH over 24 hours, or 1 AH over 1 hour. So people add a second short cut which is where the whole AH thing gets confusing.

Amp hours are not average amps over 1 hour. To get average Amps per hour, you have to get the total AH and divide it by the number of Hours. In other words average amps.

To answer your original question, IMHO people should stick to the convention, even though it is a short cut and say xx AH at 24V to be clear because everyone thinks they understand that.

Even if i use AH for fridge consumption and give an exact time ... my system voltage still varies wildly between 12.0v and 15v, which in the scheme of measurements is quite a bit on the amperage front.

I think i'll just always quote both figures (Ah and Wh), aswell as a time context and let the other human decide what they interpret!

I think most people find it easy to refer to amps as you and peter referred to ... but it's not exactly accurate. As a mate on a 24v system saying his identical model fridge "is only pulling 2 amps mate, why's yours pulling 4"

Anyways thanks for the input guys!

Can you define your battery capacity in Watts for me .... please.

Petunia said:
Can you define your battery capacity in Watts for me .... please.
Click to expand...

Therein lies the problem as alluded to in the post above. Your deep cycle capacity is rated in Amp hours. So it is perfectly acceptable to use the Ah unit for measuring power consumption and you can then see how that is affecting your battery's capacity. You cant readily see how much capacity has been used by using the watt hour unit of measure.

I hear your argument re varying voltage. However you forget the amperage will vary as the voltage does to maintain the constant power draw the appliance needs.. Wh is no better or accurate a unit than Ah in regards to energy consumption in a 12V system.

Although as stated, AH needs a unit of time also attached to it to have any meaning. I always refer to energy consumption over a 24 hour period. In regards to a fridge, there are too many variables at play to measure a fridges energy consumption over a shorter period - even 12 hours in fact. You can use smaller units of time in regards to Ah for appliances that have a constant current draw and cycle rate. Fridges do not meet that requirement, hence the need for a longer time average to have any sense of accuracy.
Last edited: Jul 29, 2019
B

Petunia said:
Can you define your battery capacity in Watts for me .... please.
Click to expand...

Cheers guys. This is how I ended up expressing consumption in the conversations that spurred this thread. So far all understood. 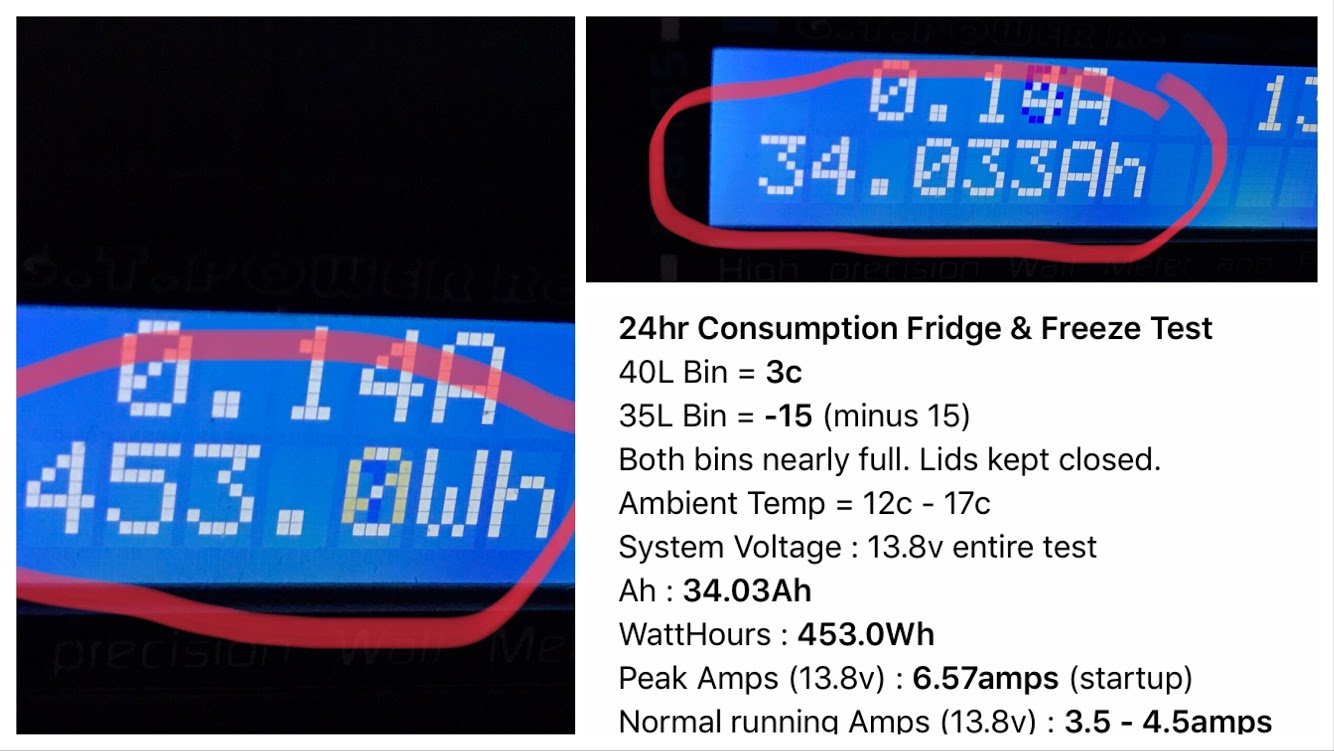 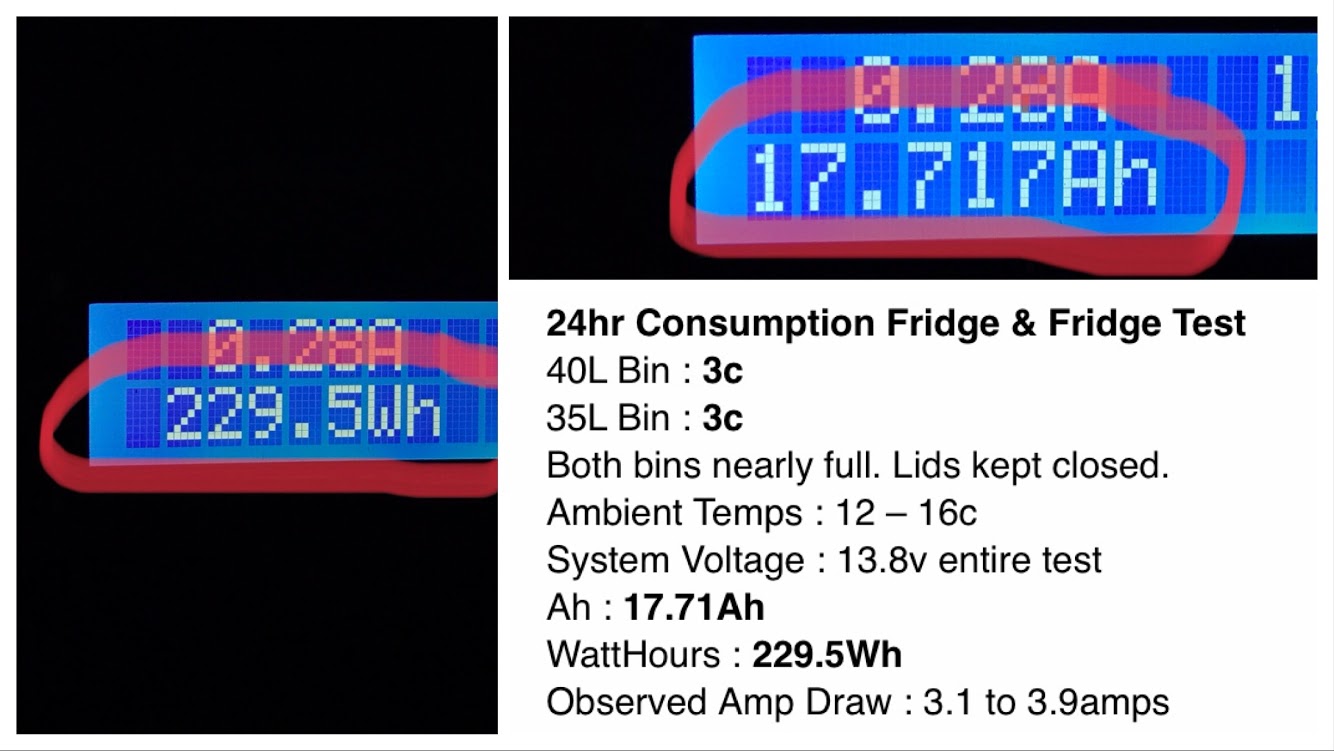 darb said:
Cheers guys. This is how I ended up expressing consumption in the conversations that spurred this thread. So far all understood.

And that's about all you can do. There is nothing wrong with that at all.

I have one of those meters that also logs power on time - great for measuring cycle times on fridge tests - problem being the meter screws up every time it hits 20 or so Ah and the seller doesn't want to know about it. $50 down the drain. I refuse to buy stuff from him now unless he has a unique product I want. He knows its a problem, has got his money, and its now stuff you. What he doesn't realise is the 100 or so people that bought one are now saying, no, stuff you. Beware ABR sidewinder should you need to make a return of product.
D

I'll keep that in mind ... it was just a $10 type ebay jobby, not expecting the world