On a recent trip to West OZ we headed down to a beach near Margaret River for a before brekky swim and was greeted by the site of a stranded baby Humpback whale on the beach.Several people were doing what they could to help him,we stood and looked in disbelief as the poor thing groaned and flapped his tail and pectral fin occassionaly trying to get free, but he was stuck there. After watching for a while we could watch no longer and asked the ranger,who had arrived about an hour before if we could help at all,so into the water we went, for the next several hours.
The little whale was this years calf and still on mothers milk, they say he weighed about 7 tons. His mother couldn't be seen from a spotter plane which flew over head keeping a look out for sharks that may be attracted to the whale. We did see a lot of Whales moving along the coast,but this was very sad.

holding him upright so he could breath 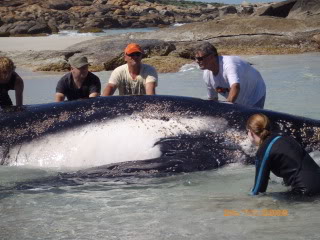 Bucketing water to keep him cool 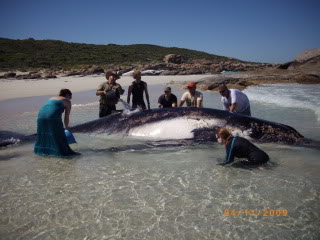 Sadly the little whale could not be saved.

Sadly it happens far too often over here, wasn't long ago a whole pod of wales beached themselves.

My wife & I have said that if there was going to be a whale stranding,near to were we where at that time, that we would go & help. They are so majestic animals,so sad that the calf didn't make it.

I used to live at Prevelly Park (Margaret River) for a few years, used to see a few whales cruzing the SW coast while surfing.

Poor little guy, good on ya for helping out guys !

That's very sad, good on you for trying to do what you could...

Good on you guys for trying a sad ending though poor bugger.