Just returned home after a quick 5000klm road trip from Darwin to Camden via Melbourne. So what is forum post worthy about that one might ask ? Well, suss out the wheels.... 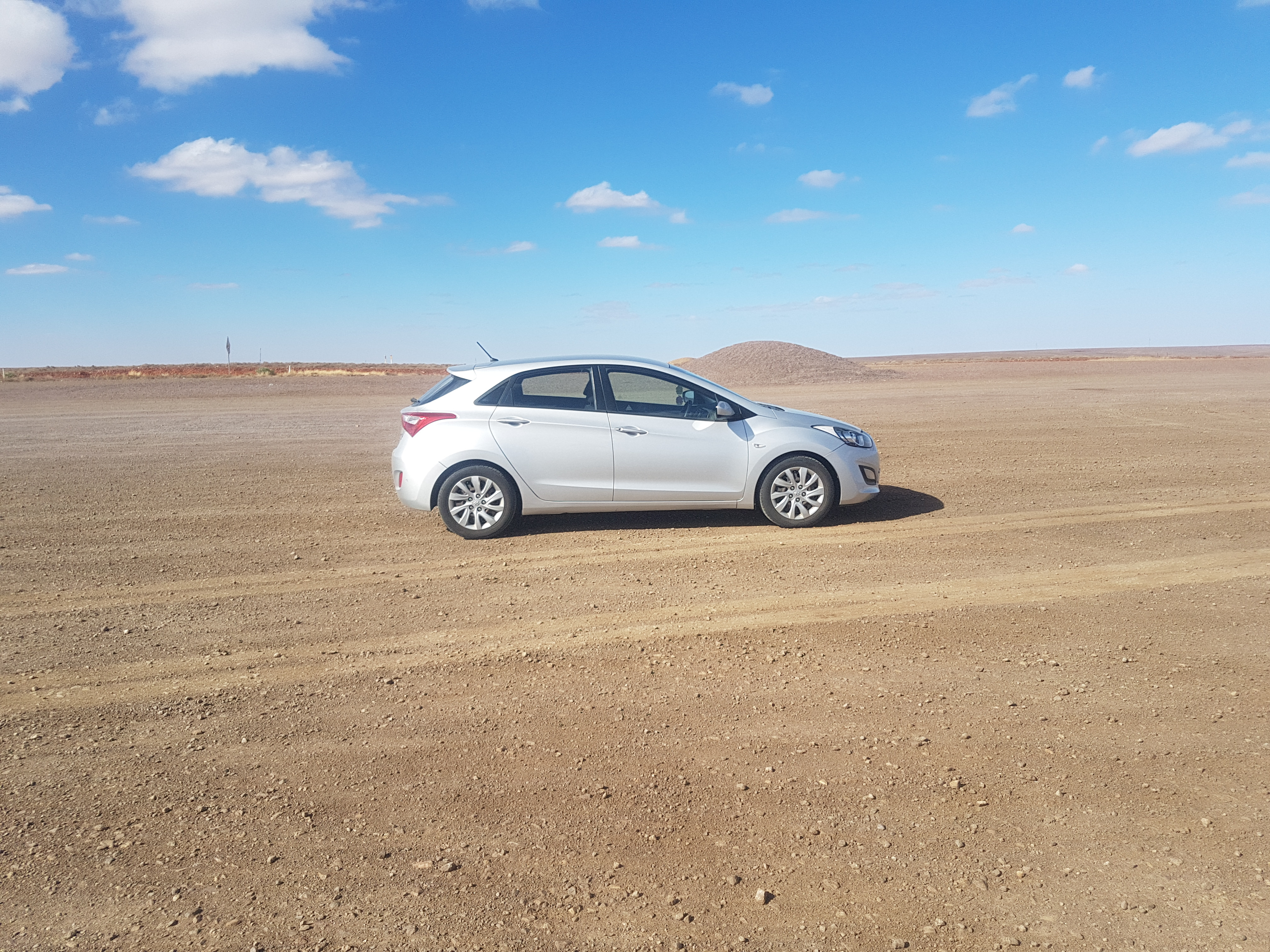 Yep its a 2013 Hyundai i30. A diesel no less ( I still have some self respect )
My first Trip in a 2wd car since 1987.
So the story is...... My son the Beamer Tech rescued this Hyundai from his work several years ago. Brand new car with 20klm on the clock. Blackfellers broke into the office, stole the keys drove the car through the front gates, holing the radiator. They drove it until they cooked the engine then did a runner ( as you would ) So the Dealer ( where the young bloke works....BMW, Land Rover and Hyundai ) recovered the car and parked it up at the back of the Lot, and briefly flirted with the idea of having the apprentices repair it. Didn't happen of course, even though they bought all the new body parts and panels. After a couple of years gathering dust, the son approached the Boss who gave it to him for $800.00 ! Rooted still of course, so the young fella bought a new engine and transmission out of a hail damaged write off in Brisbane ( 2 grand ) and bought / acquired all the replacement panels and stuff for 3 grand. So an ex stolen new Hyundai was ressurected from the dead for 6 grand. Its only just out of warranty actually. Son used it as a daily driver and put 20,000 klm on it before buying a new Triton last year..... yes yes, I did everything a loving father could do ( except give him my Hilux and go and buy a new 'Cruiser myself ), but no, he bought a Triton ( and squats to take a leak I tell him now lol )
But I digress ( as usual )
Young bloke wanted to sell the Hyundai to help finance the Triton. My sister and family and my mother came up for a visit over the New Year and the son lent me the Hyundai to ferry 'em all around the touristy spots. My sister loved the car ( she drives a Beamer and a Volksy Tiguan in Sydney. and decided to buy it off her nephew. I wasn't that keen.... the son and I every now and then buy do-her-upper-as and on sell them. I finance him and he does the mechanicals and as long as I get my outlay back I let him keep the profits... sorta just helping him get ahead a bit if you know what I mean, So the rule I have is not to sell to family and friends in case there are mechanical issues later that we might be blamed for... In any case my sister wanted the car and the son sold it to her for 6 grand. I got some quotes for transport and they were between 1000 and 1400 dollars to Sydney. No fun in that so I did an estimate of costs to drive ( me, semi retired ) including air fare and accommodation and it was under a grand.
So a service before the trip. 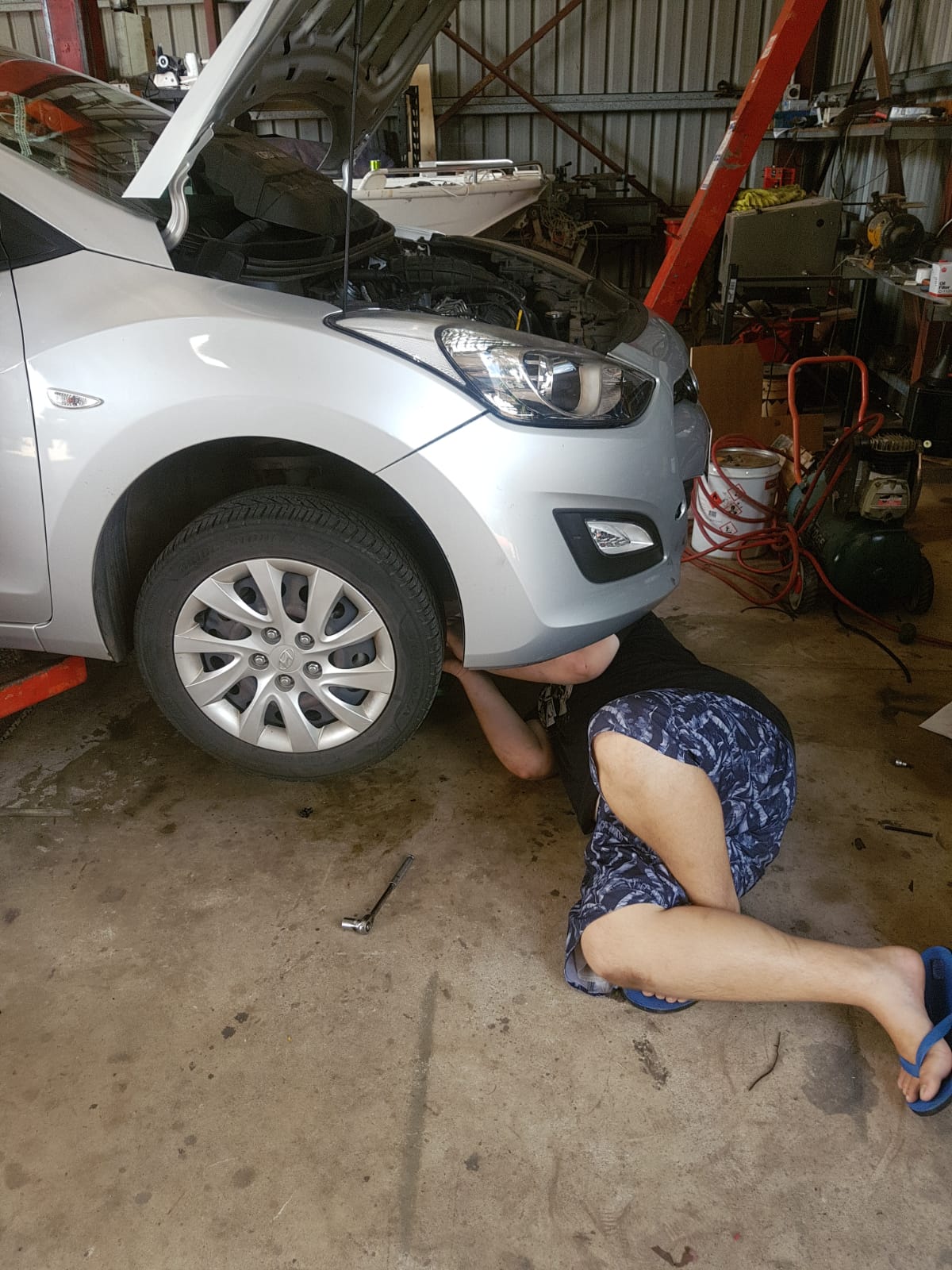 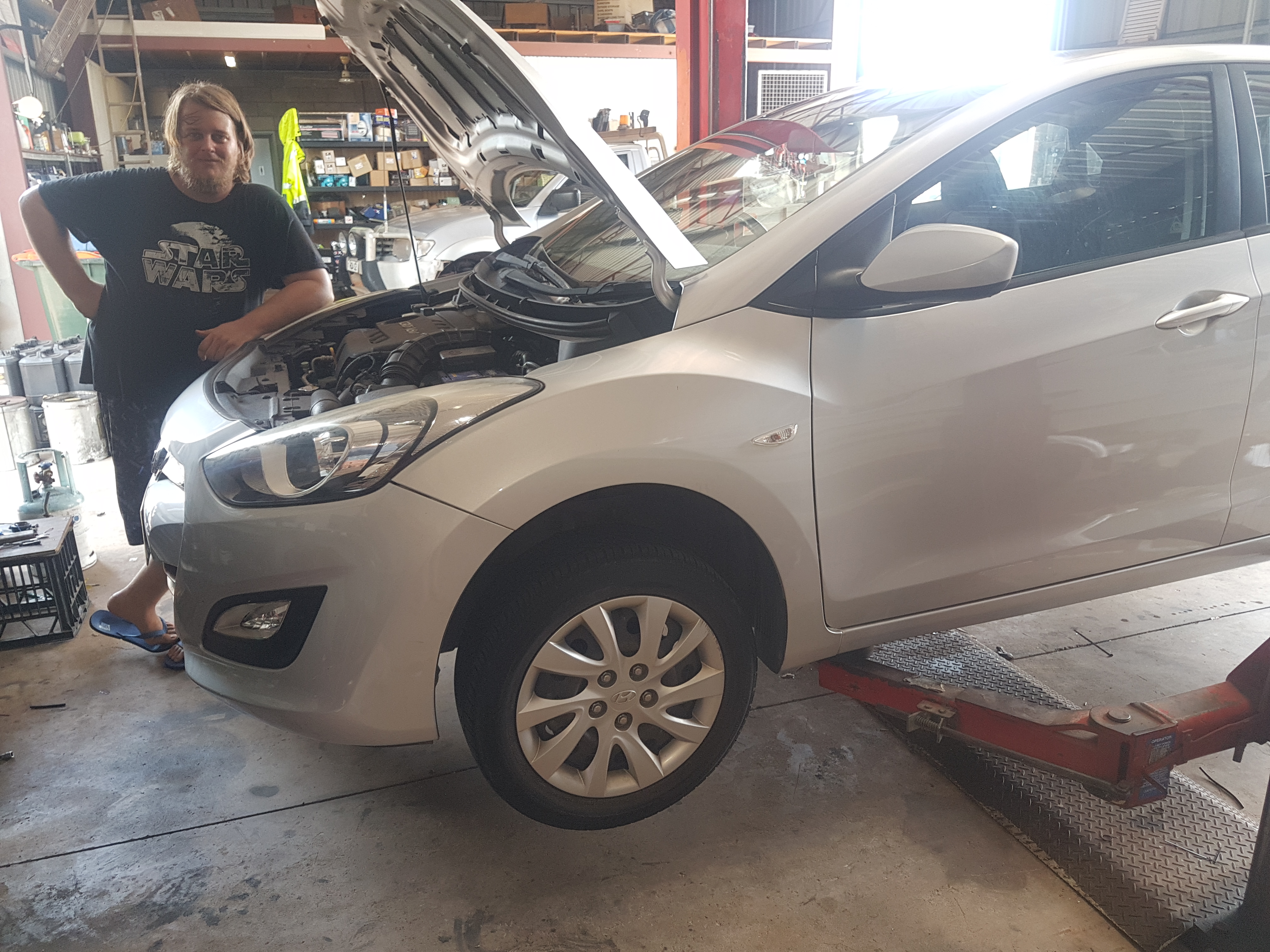 My eldest son works FIFO in WA and we planned the trip via Queensland and he would fly back to Perth from Sydney. the floods put the kybosh on that, he went back to work, so I re planned the trip via The Alice and Port Augusta the following week. With a small detour to Melboune to attend an uncle's 90th birthday.
These i30's only have a 53 litre fuel tank capacity, so i took the obligatory 20 litres spare, got rid of the stupid bloody space saver spare wheel, small tool kit, jumper leads, 20L of water and esky with beer for Ron ( later on )
So day 1 Darwin to Alice... about 1500klm. I left home at 4.00am, topped up the fuel tank ( 18 litres for 320klm.... hmmm I thought, not bad.... ). So after Katherine and in daylight hours. set the cruise control on 130kph, put on the latest Stephen King audio book ( 18 hours worth, and thats my way of combating driver fatigue, that and a 10 min power nap if the yawning starts.... ) Arrived in Alice at 5.30pm so 13 and half hours on the road. The 130kph speed limits on the open highway is a Godsend in the NT. Time and time again the do gooder numpties down South bag us out re the highway speeds, with the 'speed kills' campaigns. Well from personal experience both privately and professionally on the highway, its not the speed, it is driver fatigue that is the killer. Me ? well in the old days of open speed limits I never drove at 160kph and did Darwin-Alice in 11 hours. I thought that speed on unfenced roads is dangerous. Nor have I owned a vehicle that goes that fast anyways....lol.
My good mate Burt lives and works in Alice Springs with his daughter, so they put me up for the night and he made me drink lots of beer before bed, not ideal preparation for another solid day on the road. Little car humming along nicely, quite comfy to drive. Bit more road noise than I thought, but aircon cranked up to 'flat chat' setting and Stephen King keeping me entertained. Took off 6.00am from Alice and refueled at Kulgera on the NT-SA border. 49L and 800 klicks ! How good is that ! And thats sitting on 130kph all the way !
As soon as you cross into SA the Stuart Highway has the 110kph speed limit so set the cruise control on 113 'cause cops wont book you 3kph over but they will 5kph over ( yes... experience ). The SA section to Port Augusta is a big, wide open nice bit of road with bugger all traffic and it should, at the very least, have a 130klm speed limit. 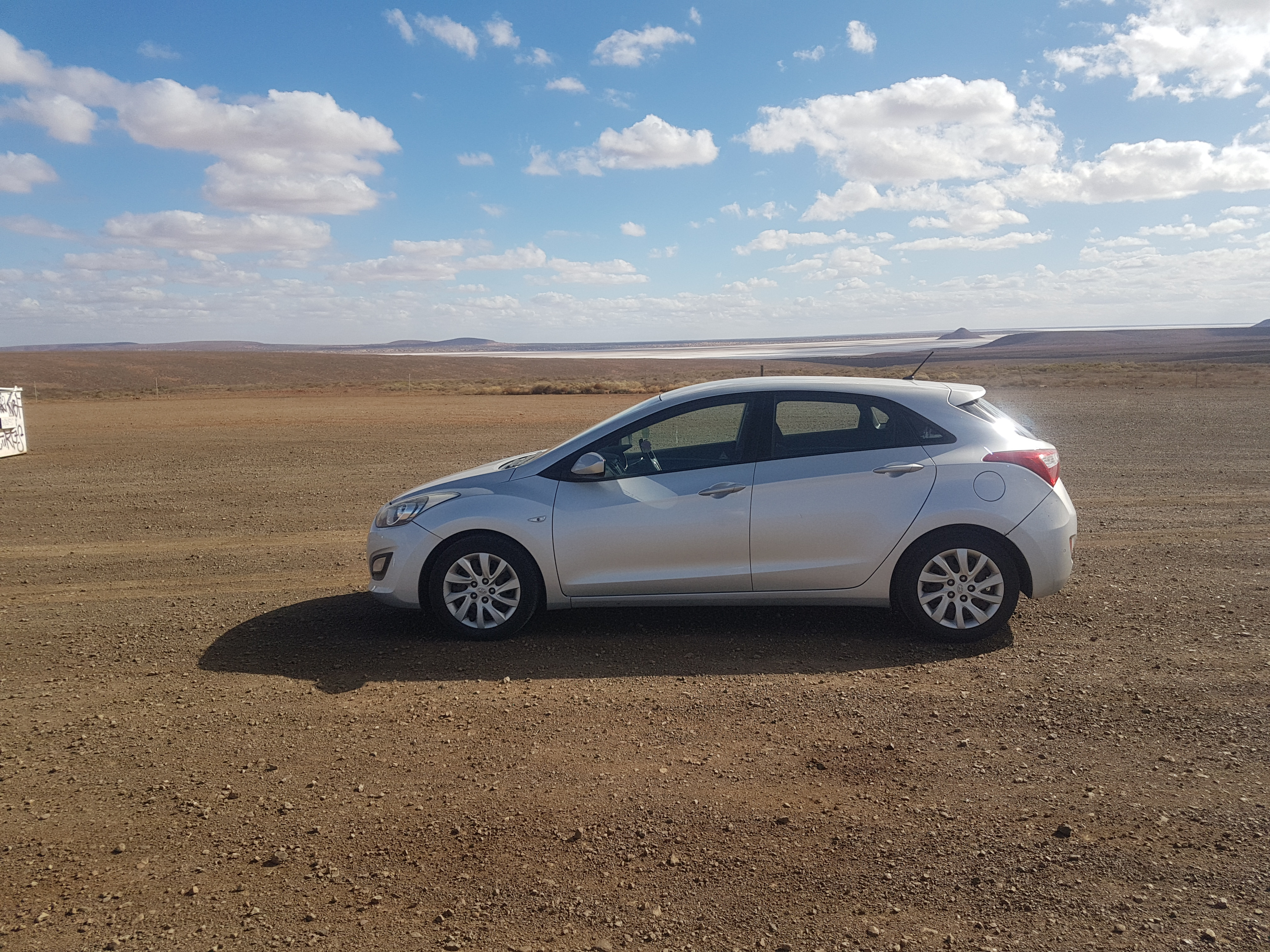 The low fuel light come on near Woomera so stopped and put in 10 litres to get to port a gutter. From memory about 1000 kays used 59 litres . Sensational ! ( daydreaming about putting one of these diesel engines in a Suzuki... lol )
And as luck would have it, caught up with old mates Laz and Jen and their brand spanking new mobile home ( Fiat of all things possible. ! ) They bought it in Wodonga and were taking it home to Mandura over West. 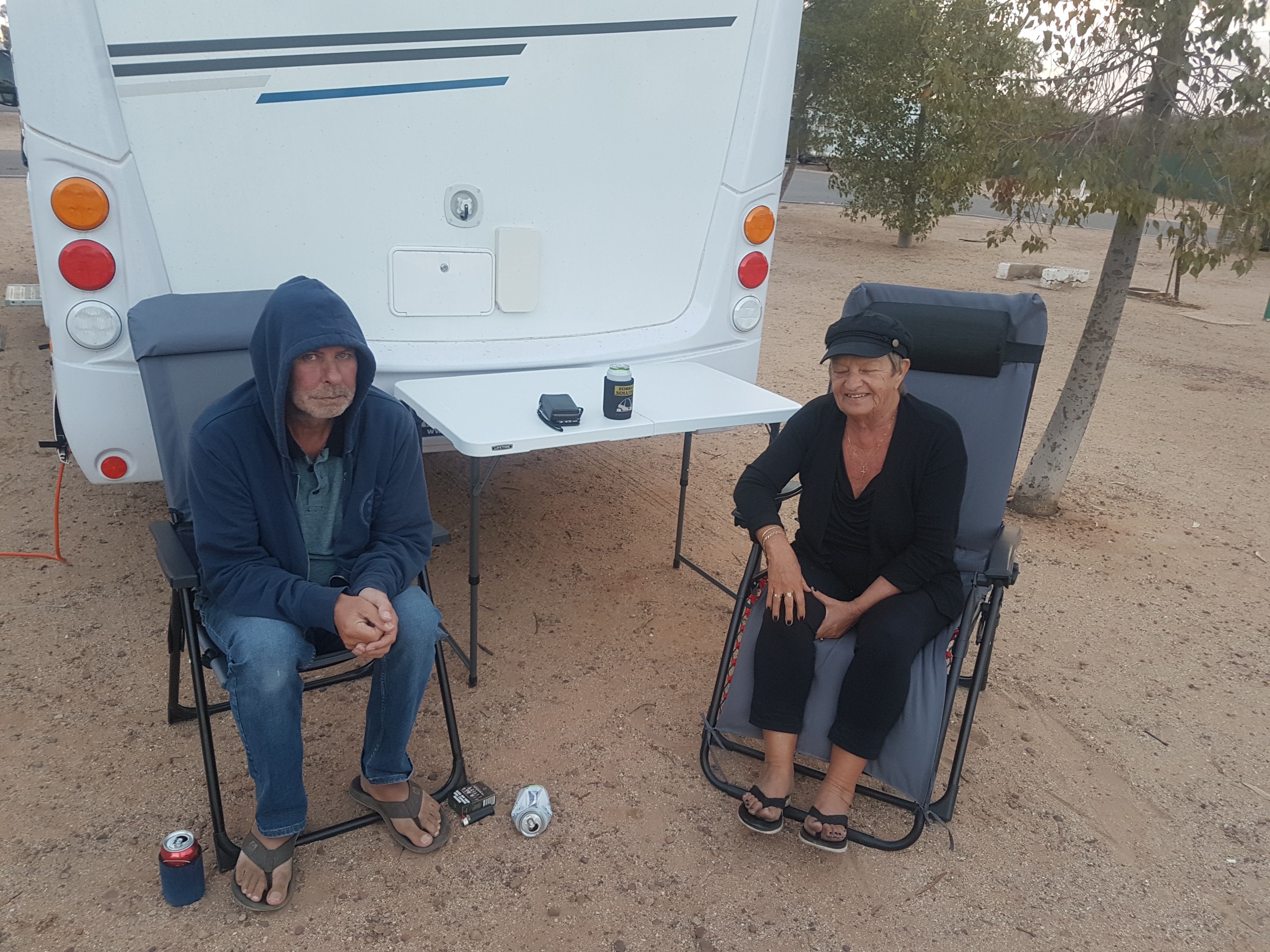 Jeez it was cold in PA.... a cool change had come through, and after +40c in Tennant and Alice the day before it was under 20c and a cold wind blowing from the south west. No I had no warm clothes ... lol 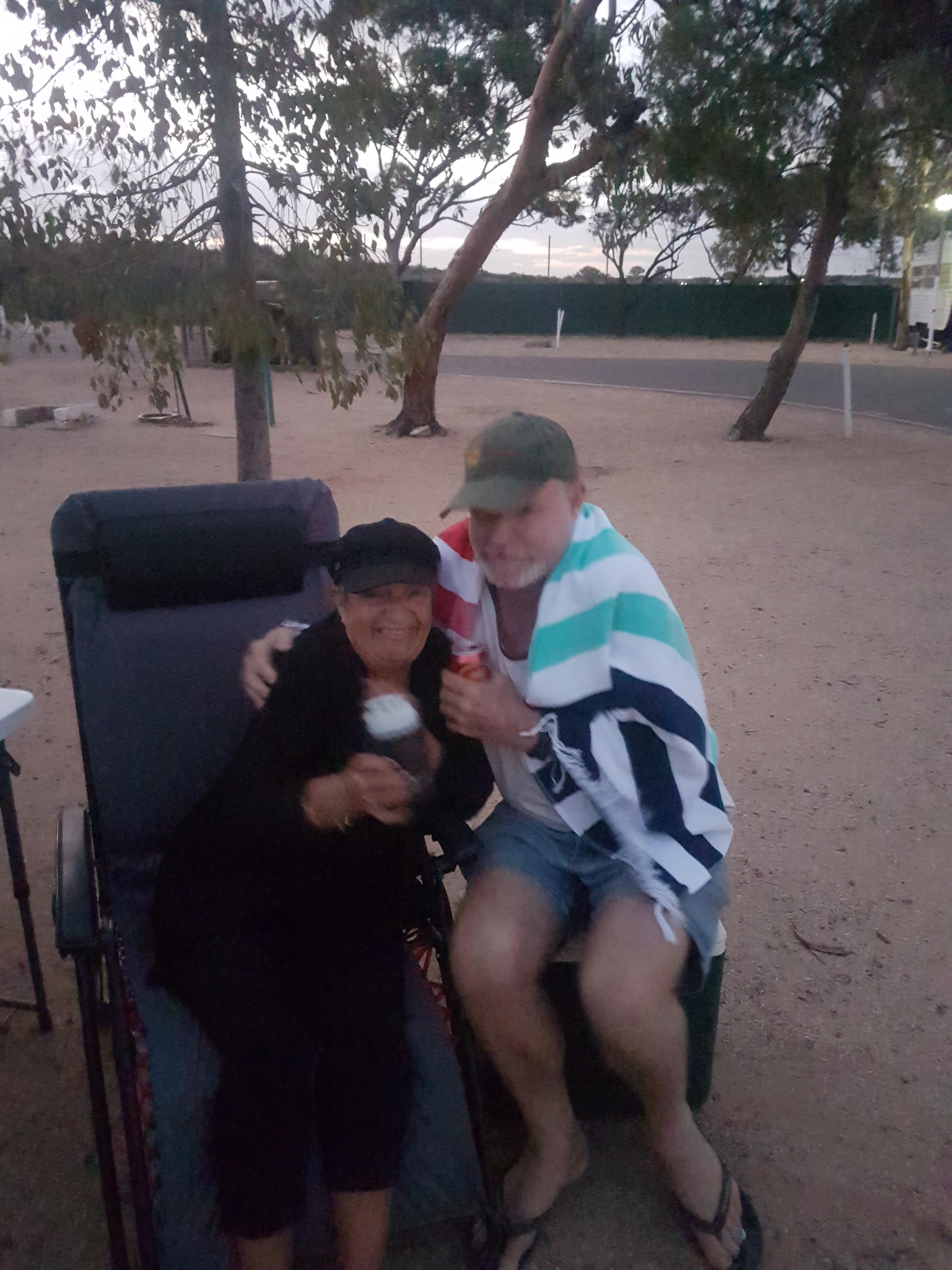 And they also forced me to drink beer.... again. 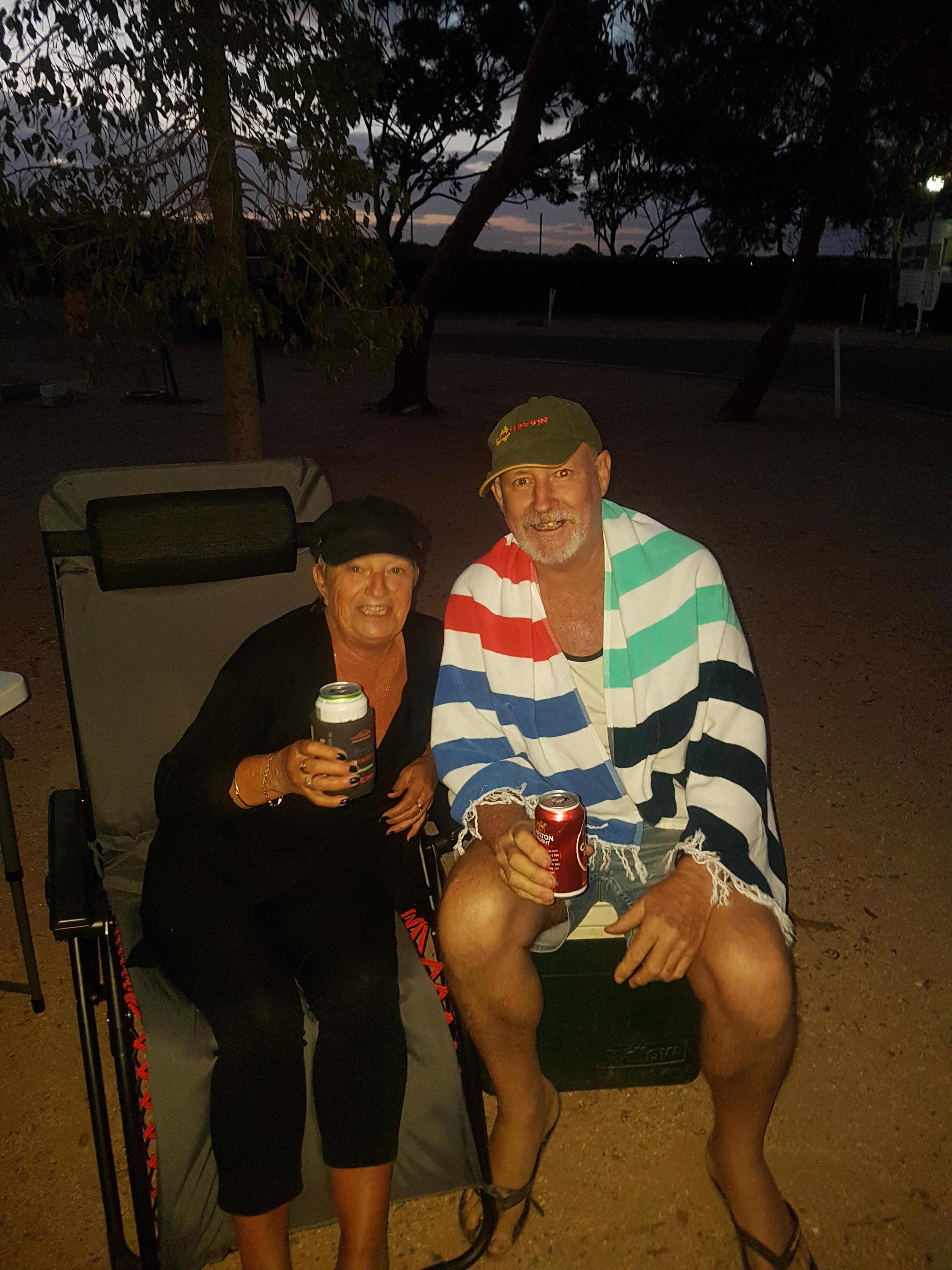 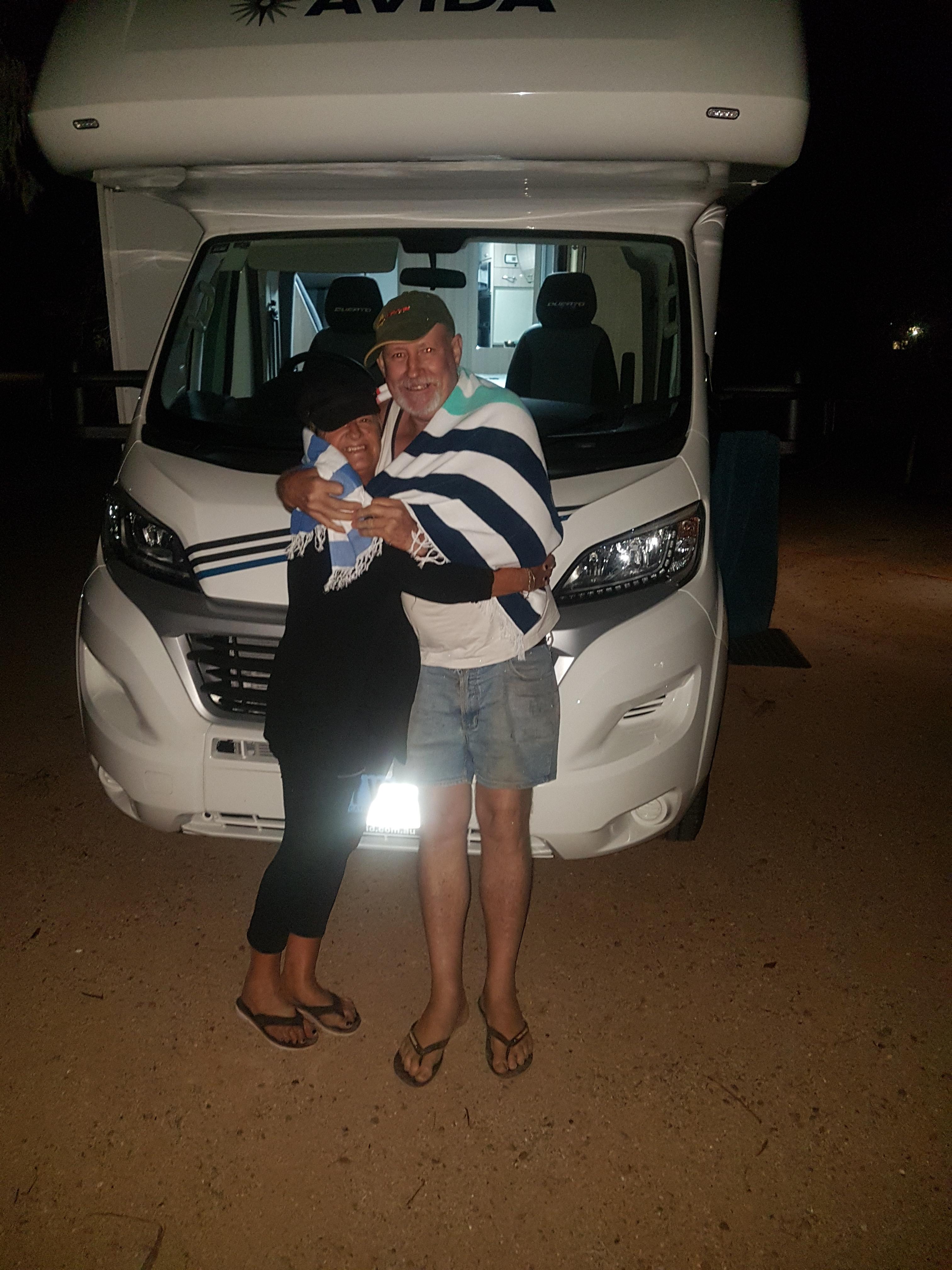 Only a short run today to Naracoorte to catch up with another old Darwin mate. He doesn't know I'm on a road trip so I rang him fom Murray Bridge, asking if he felt like a beer and a chat. Being ex Darwin the answer was in the affirmative... so a few beers and counter meal for dinner at an old pub in town. And early in the sack as it's been 3 days on the road and yes, fatigue is setting in. Wombat ( the mate ) is off over to Albury in the morning, so we drive in tandem to Horsham where he heads off to St Arnard and I continue east to Melbourne
Wombat has always been a Ford man and I have spent 10 years or more trying to convince him to get a Tojo...... ahhhh my work here is done.... 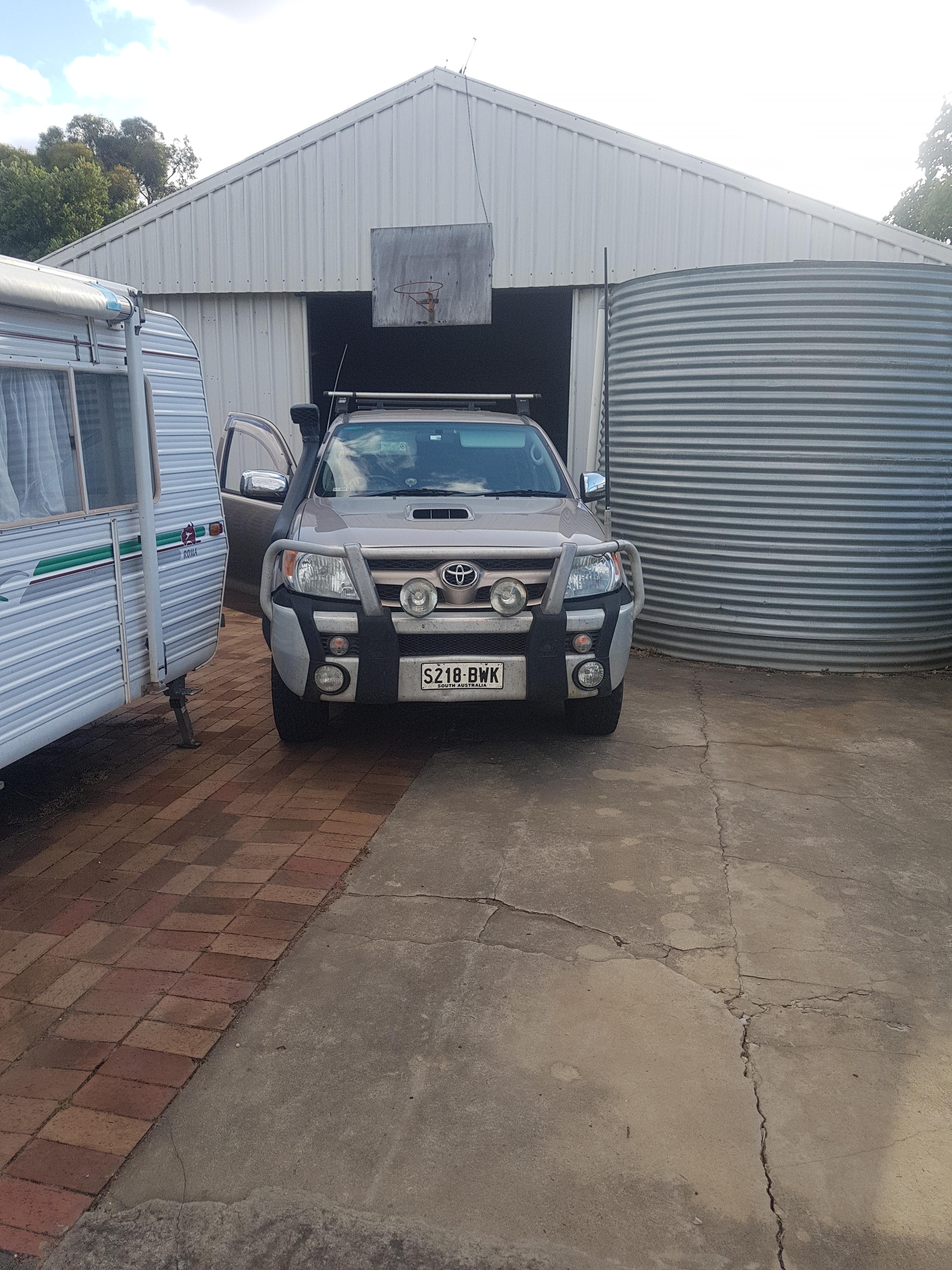 The fuel light came on again near Ararat so filled the tank and tummy. Not quite 51 litres all the way from Port Augusta, via a bit of a detour to Naracoorte 880klm ! still cant believe the fuel economy.....
3 nights at friends place at St Andrews just north of Melbourne......the whole countryside is as dry as buggery, in fact the last green grass I saw on the trip was at Elliot 700klm south of Darwin. 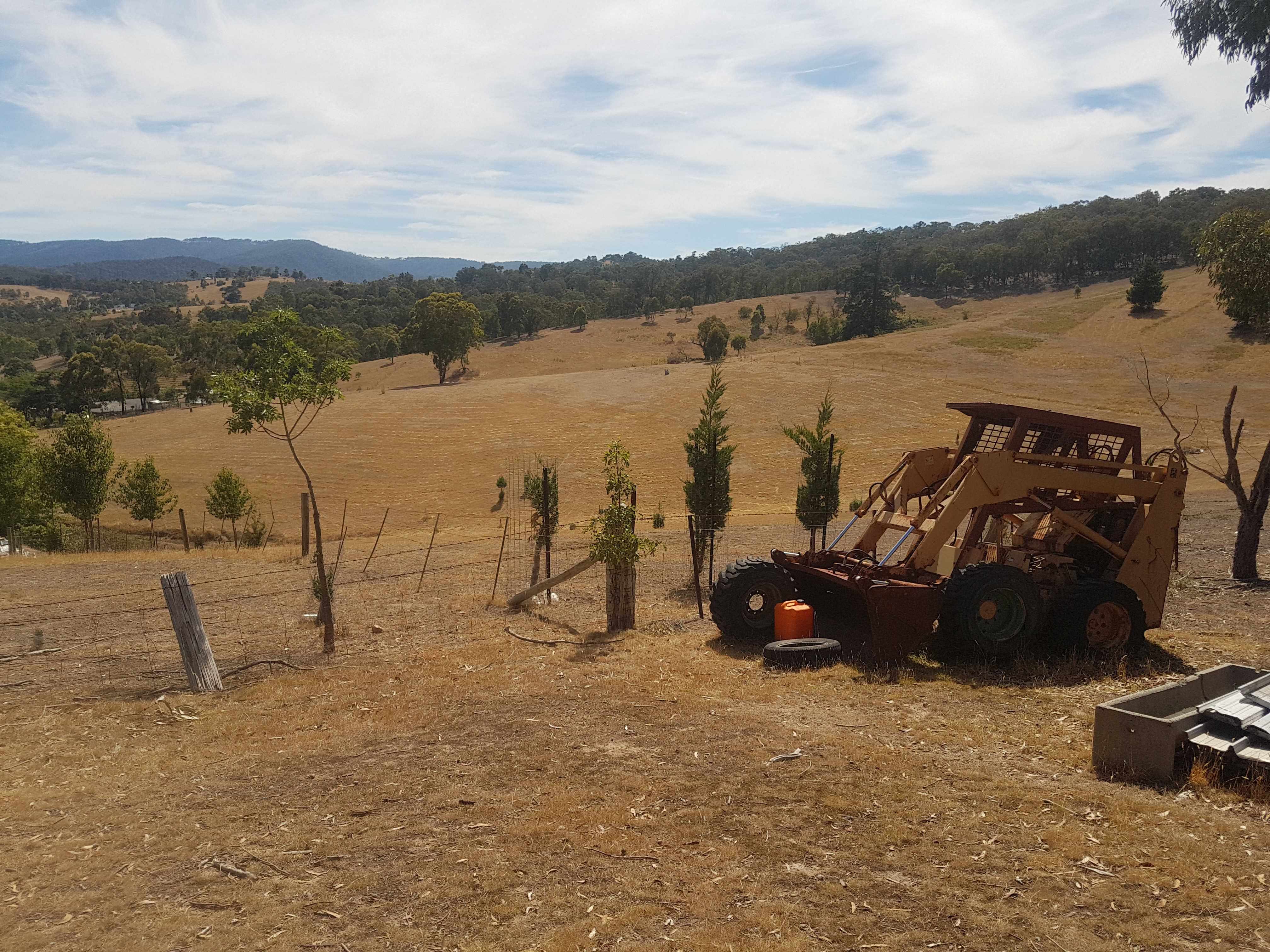 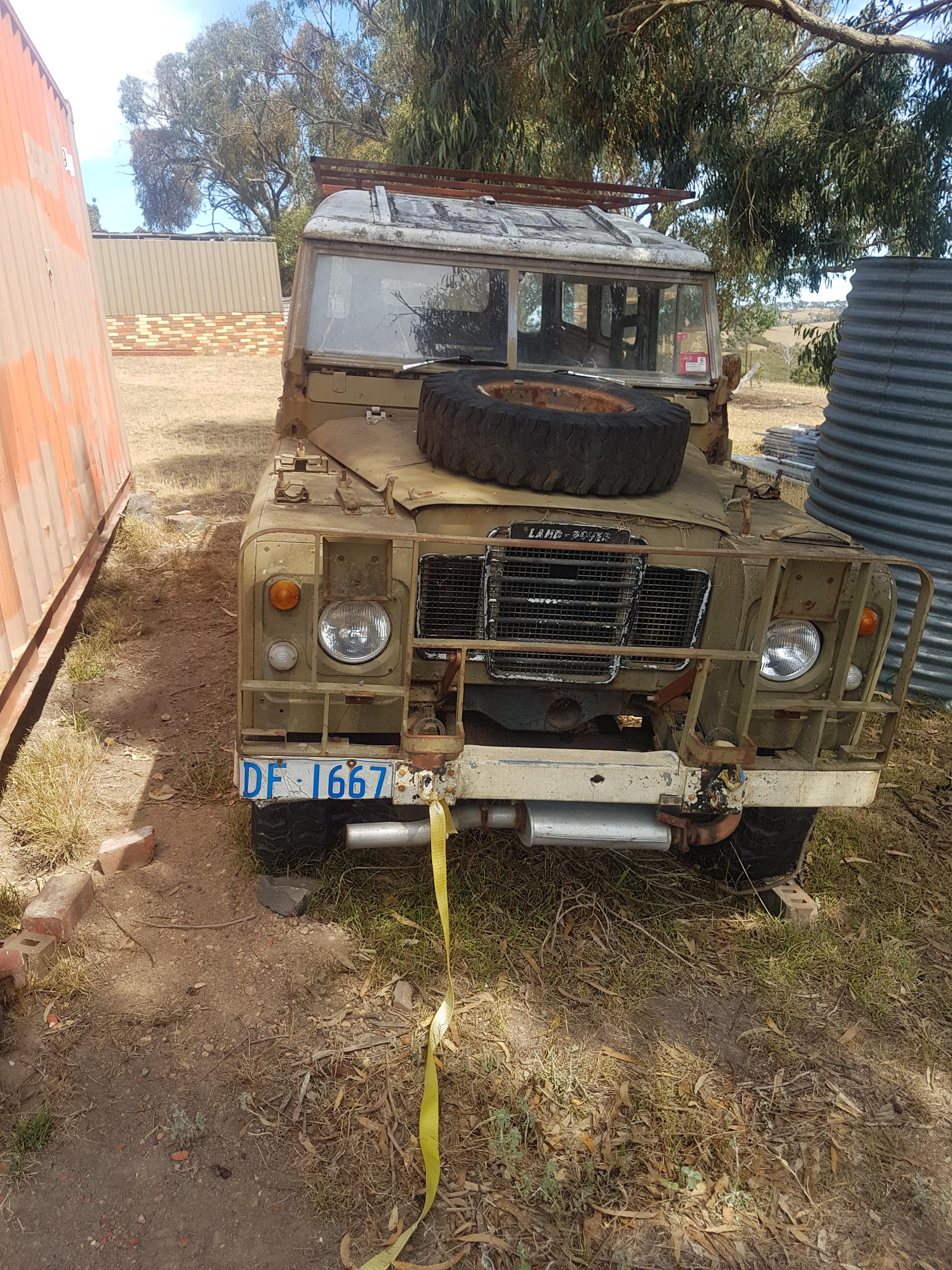 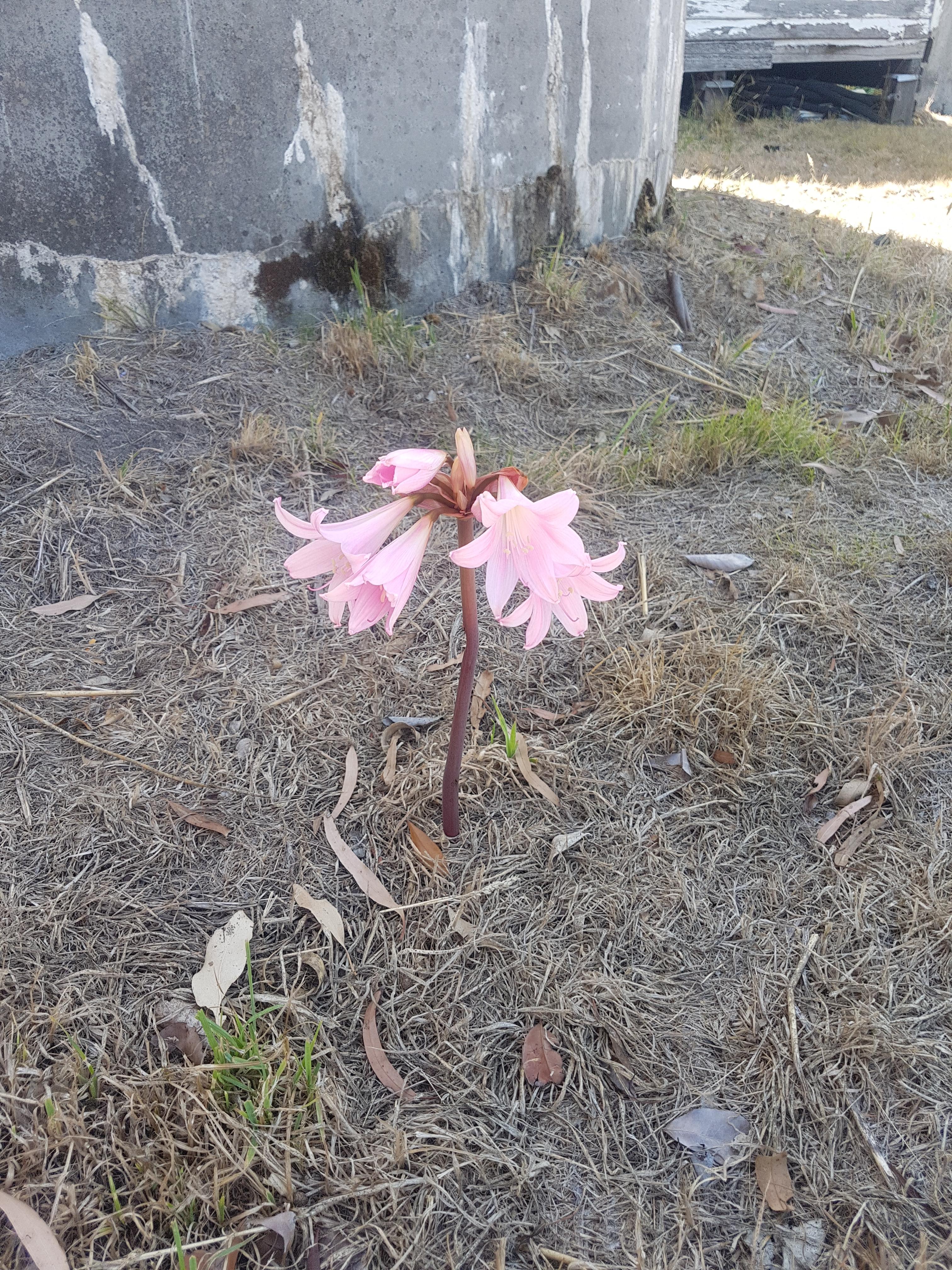 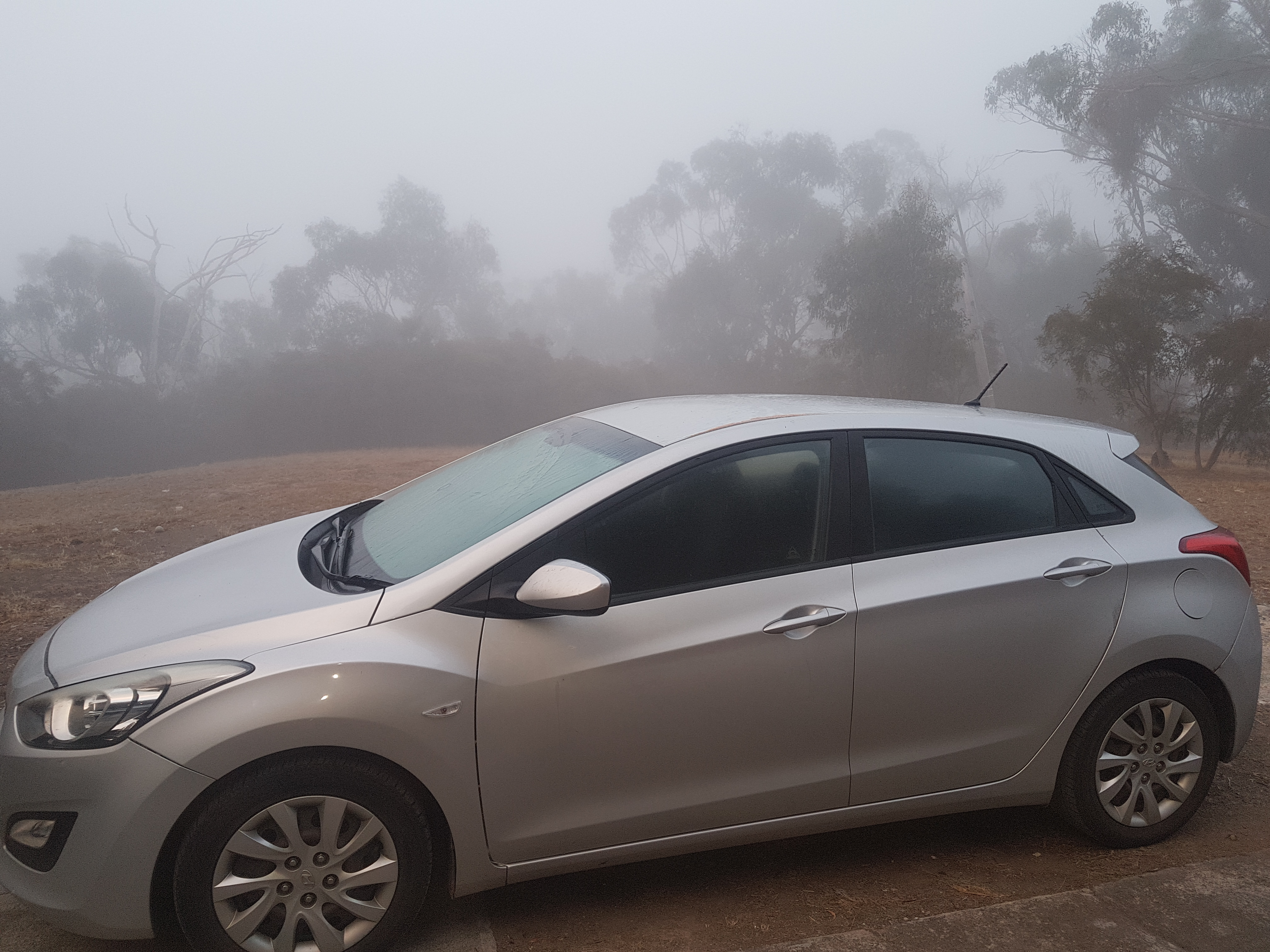 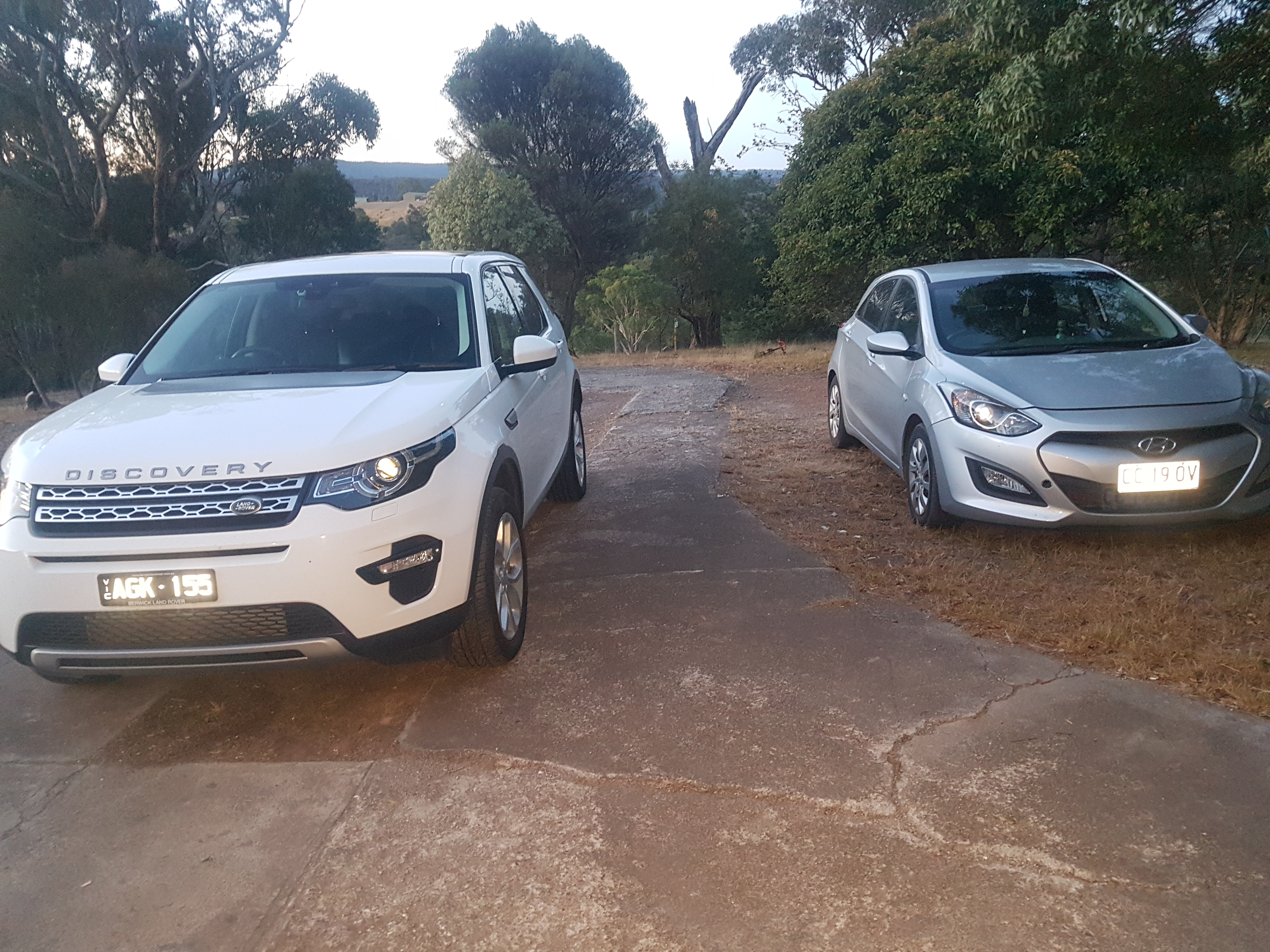 My late father's brother turned 90 the other day. He is the last of 7 siblings. I was invited months ago but declined at the time, then with the planning of this trip via South Australia due to floods in QLD, I thought I would just front up un announced. Caused a bit of a stir... saw cousins and rellies I hadn't seen in 50 years. 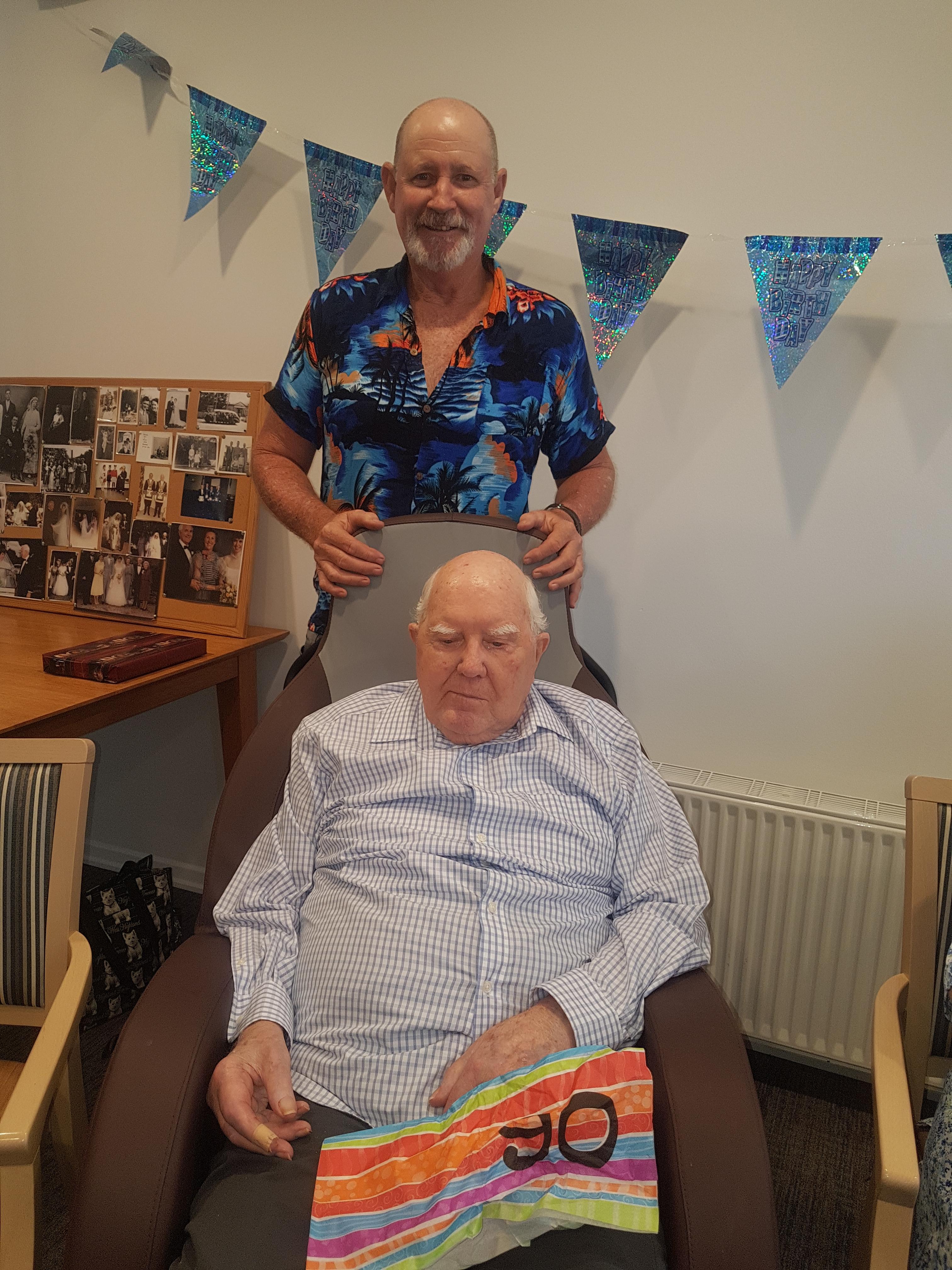 Final destination Sydney, so just a quick run up the Hume to mum's place in Camden. Stopped at the 'Dog on the Tuckerbox' and put the last 10 litres in the tank. The fuel light came on 40klms from Pheasants Nest.... then bugger me I missed the turn in and gingerly made it to Picton wondering if i was gunna have to ring my mother to get me on the side of the road ( which happened in 1982 under the exact same circumstances except I ran out 300m from the farm house after driving up from Melbourne ) No, blokes don't actually learn.... ) anyway over 1000klm Ararat-St Andrews-Mentone-St Andrews-Picton for the grand total of 61 litres of diesel. Might be time to ditch the Toyota....? 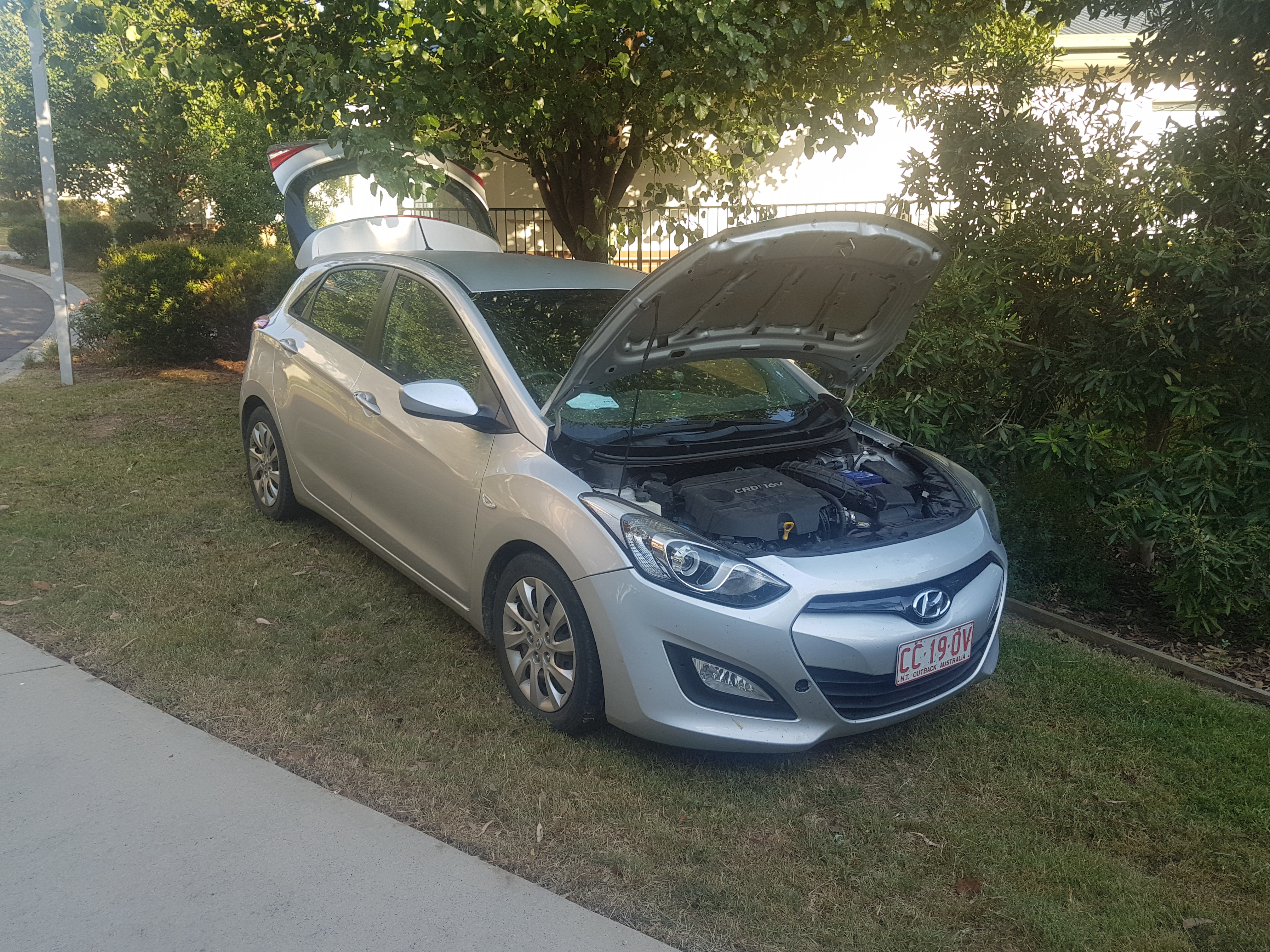 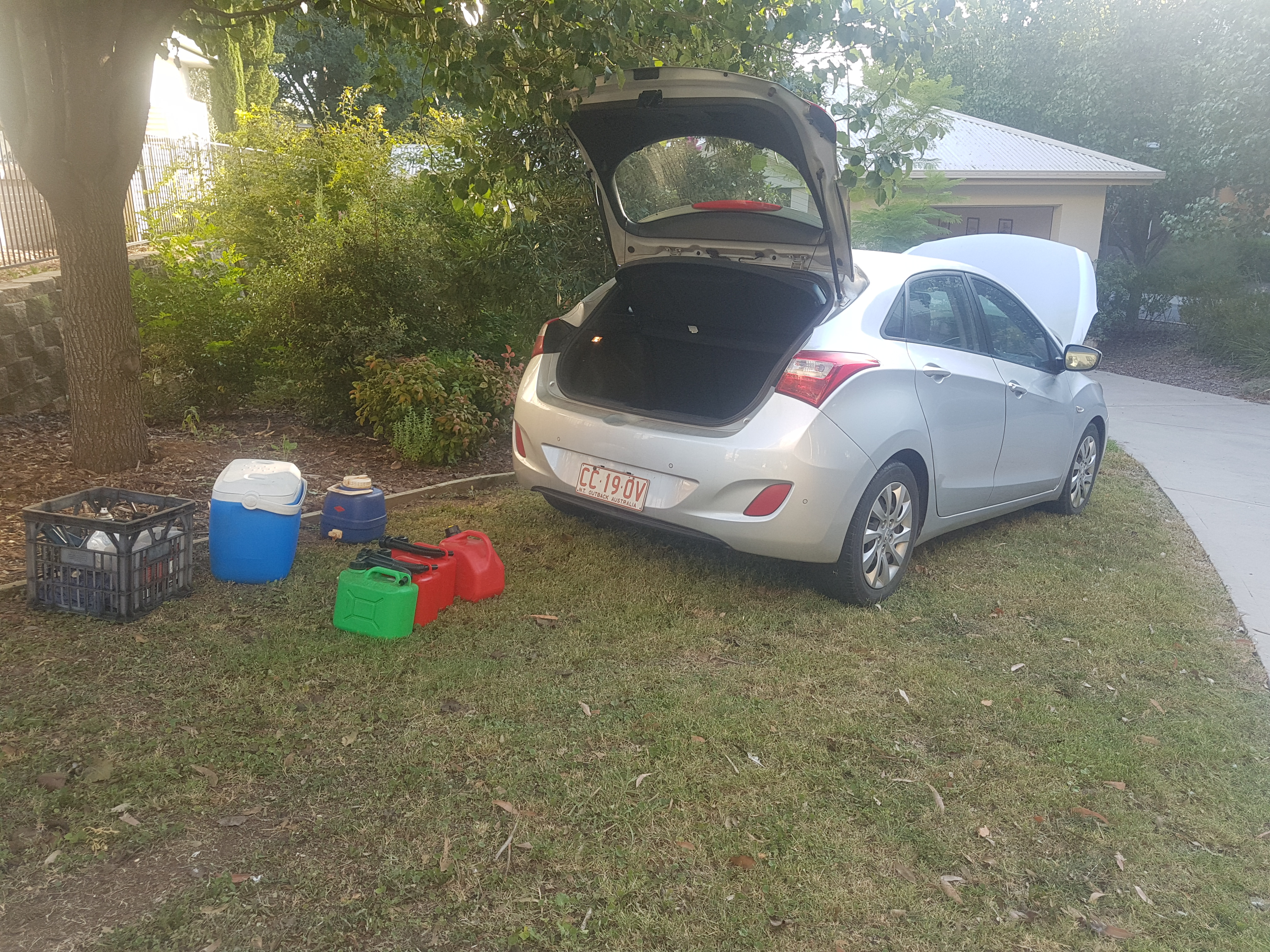 Drop the oil after the hard run from Darwin 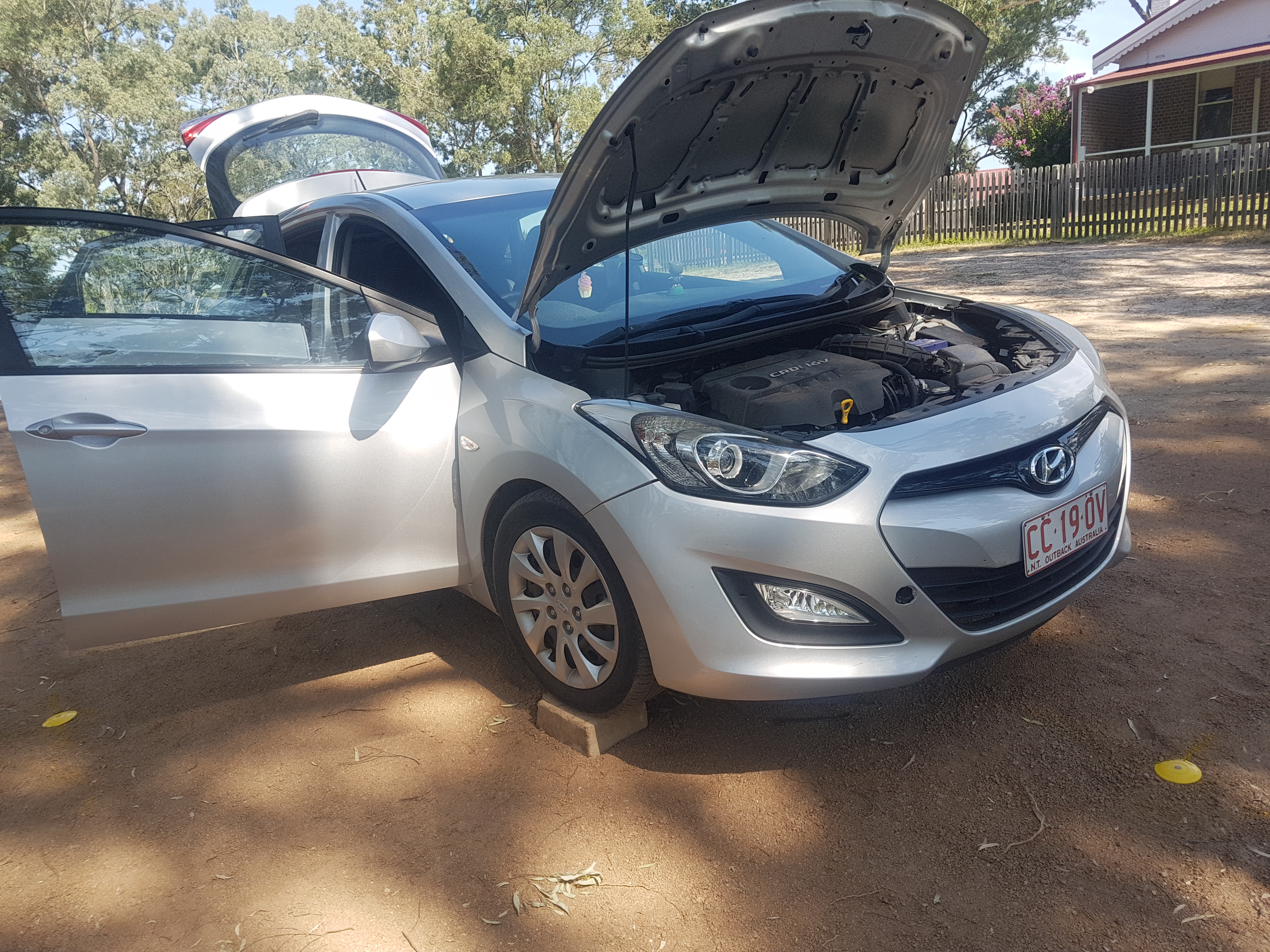 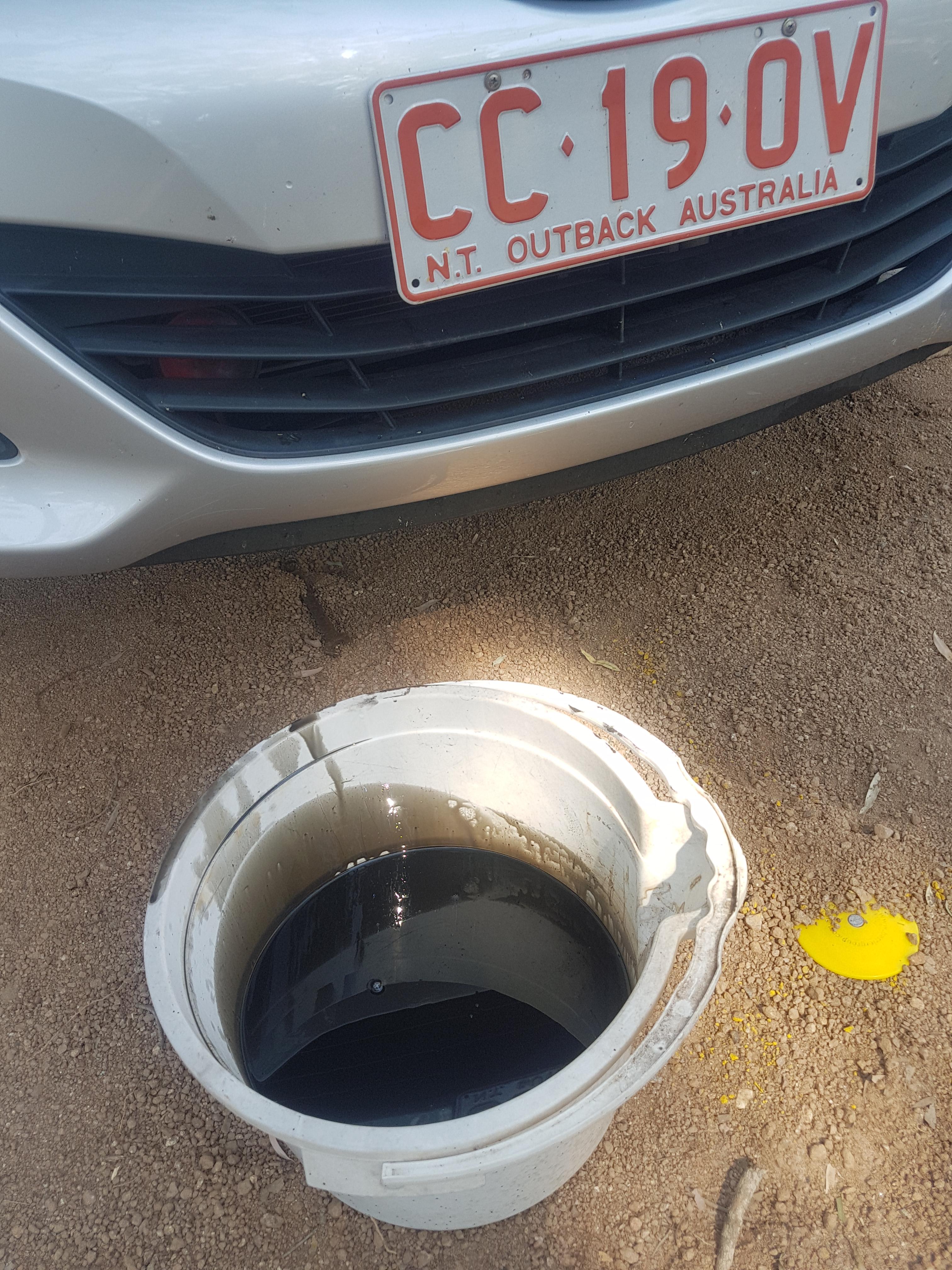 A service and a wash.... ready to deliver to my sister in Penshurst. 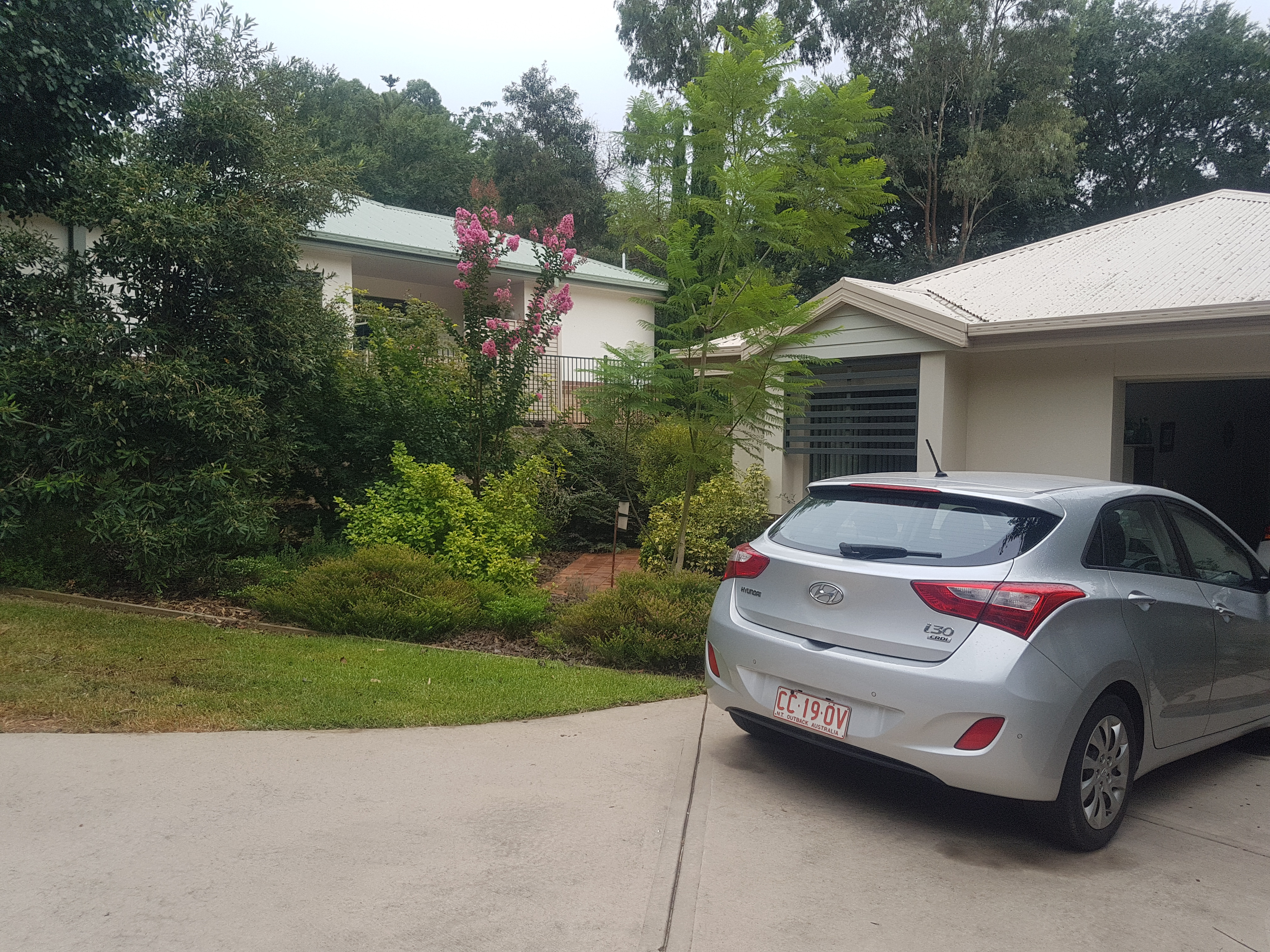 I haven't got all the facts and figures on me atm ( left my travel diary at mum's place ) but was about 5000klms and $450.00 in diesel, coupla hundred in paid for meals and accommodation and $350.00 flight home. Under a grand spent and a bit of fun too.

The little i30 diesel is a ripper of a car. Not something i ever enjoyed doing long trips is but soooo cheep to knock down KM. We bought one new in dec 2013 and put 160000 km on it in 4 years. Appart from a couple of sets of rubber it cost us nothing in repairs. I broke the rear suspension towing a boat and hit a big pothole at 100 km an hour and hyundai fixed it under warranty. And the electronic boot latch failed and again fixed.

We did a few trips to townsville and back in it.

Your sister will love it enough poke to get up and going and cheep to run.

Nice story. Must admit, Missus bought a Kia last year. Was a toss up between Mazda3, Hyundia I 30 and the Kia Cerato Sports Hatch.
Nearly went the I 30 however the kia has 7 year warranty and a full on spare mag wheel, which Mazda and Hyundai don't have. It is a petrol but as economical as . Driving my old petrol Troopy and getting 20 litres per hundred k's ( on my LPG gas it is about half price)was a miracle , 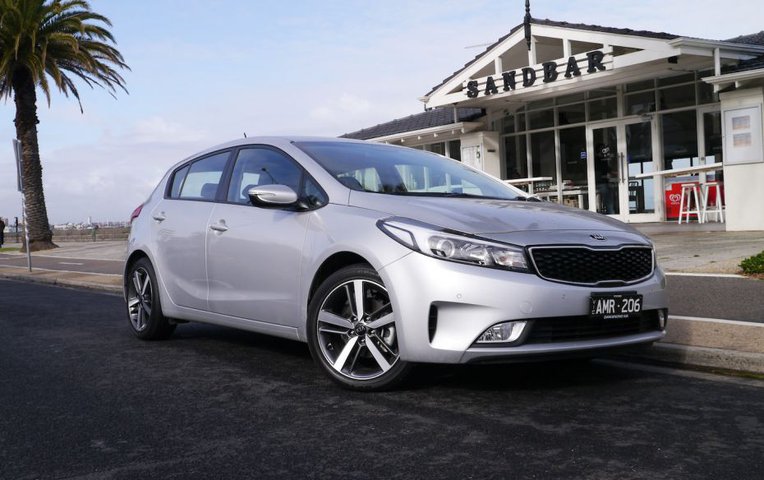 Had to replace the turbo and aircon compressor at 240k km and the shocks at 180k km... Other than that nothing but a service once a year

It's like I read a good book, you write great. It was a great trip!

LiamBlack said:
It's like I read a good book, you write great. It was a great trip!
Click to expand...