4WD heaven, there is one isn't there ?

First new car, I would've driven this until it (or I) dropped.

Not the kind of way I thought I'd lose the Ranger . . . driving over Baxter cliff in WA, or on a QLD island at high tide, or broken in a desert somewhere.
No, an elderly driver pulled out right in front of me last Tuesday, and I was doing 60k's and at only 31m distance.
All over in 2.5 seconds.

Thankfully everyone was ok, though the old boy and his wife were pretty shaken up.

Insurance seems to think it's repairable, but coming from the trade, I'm sure it'll be unviable to repair.
The crashie also chuckled when I told him on the phone today they'll probably be chasing some pricing.

They haven't even looked at it in person yet, hopefully tomorrow or Thurs.

RIP, a great 220k km, running like a dream (better than new), so well set up for touring, and under 11lt/100 on highway heading to places. 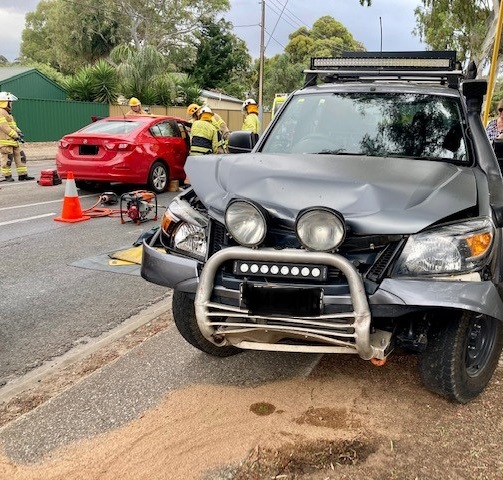 Not sure I'll get another 4WD straight away, will bide my time and maybe find an oldie to build something special.


If you watch this frame by frame, you can see my lights / bonnet go and his door start to move, airbags go off, his door glass breaks.
Last edited: Dec 5, 2020

Good that you are OK les, shame about the ranger, you had some trips in her

Holly Molly Les, glad you, and the older folks are ok. Whip those sportier and lightbars of it for the next one.
She made some great memories for you but think it might be goodbye to the ol girl mate.

LF spots got broken, but the rest, all under control

If the ins want to repair, they better be prepped for ongoing mech issues, the radiator got well pushed into the engine, think it could be suss and trans, driveline etc, all had a very fast stop.
Chassis are both bent too.

They'd be mad to repair, if on the miniscule chance they could find a repairer willing to do so, I wouldn't be keeping it.
Shouldn't bother my insurer to write off, they'll be getting full cover from the other partys insurance anyway.
If they try for repair I'll be onto demanding it written off, and fight for it, too much risk down the track for anyone.

Did the air bags go off? Is so it is a write off, 3 major structure or repair points and its gone. You have 2 chassis rails guaranteed
Glad everyone was OK

discomatt said:
Did the air bags go off? Is so it is a write off, 3 major structure or repair points and its gone. You have 2 chassis rails guaranteed
Glad everyone was OK
Click to expand...

No, my airbags didn't deploy, would have been good in a way if they did.
Took most of it with my arms I think, and just a minor bit of seatbelt soreness on the sternum.

I hope when an assessor sees it he'll see it's obviously too bad to fix, when the right people see the actual vehicle and not some initial request for quote photos the office people may have seen.
Will have to wait a couple of days still, chase them up . . . one thing I know from the past 40+ years associated in one way or another with the crash industry is never assume what an insurance co will do, they don't think like normal people, #1 is $, that's about it.

Yeah, that's the most important thing.
The old fella is losing his license and getting a dangerous driving fine / charge apparently, will lose his independence
I really feel for him regarding that.
Though probably needed, his son / daughter that came to site said to my wife (who came there from home only 2 mins drive away) he should have handed his license in many years ago.

Sorry to hear mate, but glad everyone was OK!

So glad to hear you're ok Les. Cars can be repaired or replaced, but there's only one Les!

I hope it all goes well for you with insurance and replacement - I don't think I'd want that repaired.
And I can't believe the air bags didn't deploy. I've seen cars deploy air bags with a lot less damage than that.

And yes, there is a 4WD heaven - I'm sure the Ranger will be going there!

Chatty said:
So glad to hear you're ok Les. Cars can be repaired or replaced,
Click to expand...

Ta mate, agreed, I got through without too much drama, a short ambulance ride to ensure no internal organ damage etc.
This could easily have been a double fatality, the old boy would have slammed the window very hard, and his wife in the pax seat would have bounced into the left side window / pillar on the rebound, if not for her side airbag too.

I think all that extra lower reinforcing I had done for the intercooler protection may have contributed there, but then it is only a twin front airbag (driver and pax front) in the PK, so it's not like I bought it for ANCAP rating
Besides, my arms took it pretty well, with just a fairly decent seat belt contribution.

Got to admit, I was shocked I couldn't do more, but really the 2.5 secs I had was fortunate in a way.
If I had managed a left turn to try and avoid them, and hit his door square with my right corner, that probably would have penetrated into the drivers space quite a way, he would have probably been a fatality.

Now we are in pretty much total lockdown right across SA for 6 days at least, so won't be much happening now with the assessment / claim until maybe late next week.

Glad you & all are ok Les

Hope you got it all on dash cam!

I agree with Chatty, Im suprised the airbags didnt deploy.


Hope all goes well with the claim.

Got some great footage but will keep it private until claim is settled.
Frame by frame is really interesting, the old boys airbags were incredibly fast, fraction of a second later glass goes.

Ah that sucks dude, we all put some much time and effort into our cars/4wds. No one likes to see this end result. Your airbags wouldn't have deployed as your car determined that its impact didn't require it.

Can you not perform your magical Paintless Dent Repair and a bit of buffing?

A lot of memories in that 4wd including Simpson complete with an original Dave Cox Torsen Bar repair, Madigan and Gary Highway whilst the 4wd may be gone the memories will remain, I know I often reminisce about the various 4wd's over time and where they went.

Hopefully there wasn't any / much after crash soreness in the back or neck as often is the case.

cookie64 said:
Gee Les that is an absolute bugger but glad everyone got out of it unscathed

Can you not perform your magical Paintless Dent Repair and a bit of buffing?

A lot of memories in that 4wd including Simpson complete with an original Dave Cox Torsen Bar repair, Madigan and Gary Highway whilst the 4wd may be gone the memories will remain, I know I often reminisce about the various 4wd's over time and where they went.

Hopefully there wasn't any / much after crash soreness in the back or neck as often is the case.

Thanks Col, for sure the people involved very much more important than the metal.

Oh my yes, a good 6 or 7 Simpson X, all SA lines at various times / stages, and some beauties through the NT Madigan and a couple of untracked trips to the Centre and Geo Hill.
Best trips ever I still think, all of those.
Not to say the SE beaches, Flinders, mid north, many many drives Melb, Bris, all through regional NSW on various routes etc, weren't fun

But yeah, will remember all those times, have bucket loads of 'family' photos with the Ranger in it.

Took probably half the impact with my arms, recall bracing pretty well with bent elbows before impact.
Right elbow area might have a bit of tendon / ligament (stretching), I noticed it about a week ago, but today nearly diminished.

Cheers mate, will catch up again some time I hope.

Bloody hell, glad you're ok.
They'd be mad to repair that and not write it off.

Grippy said:
They'd be mad to repair that and not write it off.
Click to expand...

Grippy said:
Bloody hell, glad you're ok.
They'd be mad to repair that and not write it off.
Click to expand...

It's insured for an agreed value, quite a bit more than the usual PK market $.
But . . . being ultimately a 3rd party claim, I'd tend to agree with you there, my insurer will recoup all cost (inc my excess) from the other party.
The chassis are damaged, how bad ?
Has to be stripped to really see.
The motor and trans plus rest of driveline has taken a big hit, I'd be really surprised if something might be amiss there after repairing, and how then to fix ?
I had the trans rebuilt heavy duty about a year and a half ago, $5800, took AGES and something like 12 visits to get it right, very finicky trans.

If there were ongoing problems, my insurer would leave themselves wide open to having to rectify them, I really don't think they will go that way, even if it was seen by them as possibly a viable repair.


shanegtr said:
Insurance companies dont care - if its repairable and not a statutory write off then they'll just do what ever is cheaper
Click to expand...

True.
I'll be warning them if there are mech issues after repair, it could cost a hell of a lot of $ in the long term.
They should take the safer way out and write off, get reimbursed by the other partys insurer.

I personally don't think they'll give a rats about the potential mechanical issues... Unless it's VERY obvious and can be proven to be directly caused by the accident, they'll wipe their hands of any future mechanical issues.

"Sorry, vehicle was running just fine when you collected it. Inspection report we had done prior to acceptance proves it."

I was under the impression though that bent chassis was automatically a write off? Could well be wrong though, not something I've ever looked into.