Hi all. It's been damn hard trying to find an alternative vehicle, especially coming from reliable Jap 4x4's. All I hear are nightmare stories or Jeeps and including "destroy my jeep.com", yet I see many on the road.

The 2003 WG is a 2.7L 5cyl turbo diesel, which I believe is the Mercedes design engine and 5 spd auto. Vehicle has live axle at front and is the last of the US made Cherokees

The 2007 WH is the 3.0L V6 turbo diesel with 5spd auto which I think is the BMW V6. The vehicle has IFS and a lot more electronics by the sound of things. Both have around 130,000klms. I like the WG more being more traditional, but the WH have the more comforts and power as well.

Any info is appreciated towards what model would be a better buy in terms of reliability etc. 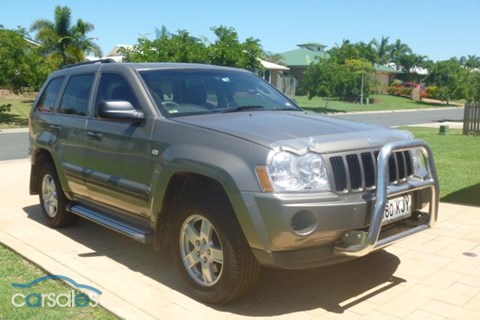 The wg looks better if that counts for anything
M

The WH 3 litre is a Mercedes too. BMW never put a diesel in a Jeep, only Range Rovers while they owned the company. I've had my 2.7 5 cylinder Grand for 6 years with only a few documented issues. There are more mods for the WH and they look a lot better with their gear on. CRD Stu does good stuff, google him for some pics. The only problem with the 3 litre Merc motor is a well documented swirl motor issue on the turbo. I believe there is a fix. The traction system is better on the WH, the WG is usually just open diffs. I've put an LSD in the rear and an ARB air locker in the front on mine to counter it. I'd go the WH. Ausjeepoffroad.com is the place to ask. Cheers.

Thanks mate. Yeah I prefer the WG for appearance and the live axle F&R diffs, appears more solid platform. The dealer won't budge off $13,990, and market value is around $10,000 + ORC. I can get a good deal on the WH and I am sure it would be more comfy. Its main purpose will be my daily driver with capability to explore a national park or get up my muddy driveway. So it doesn't need to be a monster truck or anything.
M

You have to watch the "black death" on the 2.7. A 20 cent copper washer blows the seal on an injector and it's big bucks to replace especially if its cylinder 4 or 5 as they are back under the firewall. Most will want to drop the motor out to get to them. Honestly, the WH is a better bet. 16okw and 510nm beats a lot of others out there by a long way. Still gets 10l/100 kms combined fuel economy. A little lift and some good tyres and they scrub up ok.

I can gather. Strange for Mercedes to be that thoughtless. Owner is getting a roadworthy as we speak. Things picked up so far are a leaking transmission pan seal and aircon filter. That's fine by me, so long as no engine leaks or transmission faults. It is really touch & go with Landrover or Jeep. Nice rigs but too much anxiety about faults. Will just need to keep a vigilant eye out for any abnormalities and deal with them early. Fingers crossed it remains problem free. I fly down Sunday to inspect.
M

To be honest, I've had Jap cars and a Land Rover and a Jeep. The only real anxiety is caused by everyone else, who usually haven't even owned one, telling you they are unreliable. Be prepared for a constant barrage of jibes from Jap car drivers, and a pretty wonderful camaraderie from fellow Jeep drivers. Then you get the dill who destroyed his Cherokee online, but my son has the same car in a diesel that has been trouble free for 5 years. I've seen disgruntled owners of other brands, like the Colorado with a big sign on the roof parked outside the Holden dealer in Penrith. I have a friend who has had 2 complete rebuilds of a V8 Toyota diesel in 200K and nothing gets mentioned. Or injectors on D4D's not lasting 100K...I would have gone through 4 sets on my Jeep and Land Rover but I'm still on the originals, or Nissan diesels blowing motors...it goes on. Give me a Euro diesel any day of the week. Those Merc motors are in courier vans and taxis in Europe that do a million kilometres.
Land Rovers and Jeeps are complicated luxury cars with a lot of electrics so there is actually more that can go wrong. The good things about Land Rovers and Jeeps are that if you take them off road they put a smile on your face. They impress you with their ability, they have more power and more options, they drive better and are more comfortable. If you just use them for a daily drive then you are missing a lot of what people like about them. Now my fingers are crossed that you don't buy a lemon! I hope not.

Very true and as you say... there are lemons in every basket. I don't think it would be a lemon, it's got 134,000klms so while has some k's I would think it has ironed out any teething issues. But only time will tell. What main points should I be aware of while test driving apart from steering and drive quality, oil leakes, noises, and warning codes? Any particular tell-tales not readily recognisable to the average eye?
M

Is this the WG or the WH? My WG has never leaked oil from anywhere and it's on 220K now. Early Land Rovers are famous for that. The black death is a biggy on the 2.7, take the cover off the top of the engine and look for gooey black tar at each injector. My number 4 injector went at about 180K, had to cut the cowling under the windscreen wipers to get at it. Replaced the copper injector seals on all injectors for $1000 of which $990 was labour because the seals cost $10 delivered (from a Mercedes parts specialist). There is also a problem with the climate control vents that cycle after you turn the car off. If they've overreached then it sounds like a farting noise near the glove box. It's called the "blend doors". Check the electrics on all the doors and windows to make sure they all operate. Make sure the car starts after a few turns and doesn't turn over for an extended period of time. It means there's no fuel and you might be wearing the very expensive crd fuel pump out cranking it dry. That may indicate air getting into the fuel system overnight from faulty rubber seals, not an expensive fix. Any brand crd fuel pump costs a bomb, not just a Jeep. I'd check what the fuel economy is reading out on the overhead display. Around town I expect about high 9's to 10l/100kms. You'll get down into the 8's on a trip. In the 9's if it's hilly. Using too much fuel in a diesel is bad as if the the injectors are leaking into the cylinder you'll burn a hole in the top of the piston. A dead give away is diesel smell in the sump oil and the level of oil rising over time. I haven't had that problem but know of it (not specifically in Jeeps though, all brands).
Other than that, I've had no problems with mine, its never left me on the side of the road and been excellent off the road. Be aware on the Merc diesels that all motor and gearbox parts come from Europe, they were manufactured in Austria and weren't released in the US so no parts available from there. All other parts not relating to the motor and gearbox are common and a lot cheaper in the US as Jeeps are common and popular. The diffs on the diesels have a slightly different ratio I believe.
Last edited: Sep 3, 2015

Thanks. Yeah referring to leaking pan seal on the WH. Due to pollution laws, they told the owner a roadworthy won't be passed till any oil leaks are fixed. Was a pan seal. Probably due to not cooling down properly after driving ie - straight into the garage after a trip and not run again for a period. Is typically how seals are deteriorated. Owner is getting quotes for repairs.

Well. Checked WH out today. Quite nice. Only issues were aircon regassing and 4Lo would not engage with message stating "Service Transmission". Not sure if a serious fault or a Jeep dealer exclusive service. Also transmission looks like it has been leaking for some time. But everything else works and vehicle runs well. One other minor thing was when I would turn a corner and reapply the gas pedal, you would hear a light clunk in the rear like the rear diff lash taking up. Again, not sure if anything significant or not.

Update:
Owners found fuse blown which powered the 4Lo operation. My view is that something has caused excessive current draw for the fuse to blow. So maybe the leaking oil causing a short? One other independent owner told me of a repair they did where they replaced the motor that engaged the 4Lo simulation. (I am not up-to-date with whether a stepper motor is used or a solenoid) but they described it as an "electric motor". So would there be a short in that so called device to blow the fuse?

I am pretty keen on it if the faults are minor, but if major I am inclined to go take a further flight to get the other model which has 156,000klms but no mechanical issues. Albeit $2,500 more. My thoughts are go with the current model and the money I save on negotiation fix the underlying issues and have another 20,000klms to burn.
I dunno... buying second hand is all a headfk sometimes!!!
M

Mate, head over to ausjeepoffroad.com and ask on the wh forum. They are a good bunch of blokes with heaps of knowledge. I only have experience with the wg so don't know what to recommend.

All good. Have posted but taken ages to reply. I'll just work on negotiations and wing the rest!!

Decided to take my chances. Got tire of travelling around looking a b@stard cars. Now an owner of a WH Grand. New times ahead.

70 for sale then or traded?

Local bloke wants to buy it. Will see in a week or two if he follows through.

Yeah he was one of who stopped me in the street a few times asking if I would sell it. Few other blokes have as well. He's put a deposit down but the rest is still to come.
Last edited: Sep 8, 2015
You must log in or register to reply here.
Share:
Facebook Twitter Reddit Pinterest Tumblr WhatsApp Email Link
Top